Home»Reviews»Film Festivals»Arishadvarga [2019] ‘LIFF’ Review : A Whodunit Thriller About Its Characters More Than The Mystery
Film Festivals/LIFF/Reviews

Arishadvarga [2019] ‘LIFF’ Review : A Whodunit Thriller About Its Characters More Than The Mystery

According to the Indian philosophy, Arishadvarga (Shadripu) are the six enemies of mind, which are- lust, anger, greed, attachment, pride, and jealousy. These traits prevent a person from attaining salvation. On the same note, the director, Arvind Kamath projects his characters motivated by such desires in order to sustain through the scenarios. All of it as a whole makes up for a compelling whodunit thriller which doesn’t present every card upfront. Most of what the film presents is in a puzzling form which takes this neo-noir to a better level.

Arishadvarga deals with distinct characters from different levels of paradigm and presents their actions to be motivated by the aforementioned feelings in a way or the other. The Kannada-language film uses the survival instincts of its characters to get into its basic philosophy. Meanwhile, we meet an auto-driver, a film-editor, a producer, a director, an aspiring actor and another one, working as a gigolo. All of them add up to the conflicts making it a rather complex affair.

In the opening scenes, an aspiring actor named Anish (Mahesh Bung) arrives at a mansion according to a call he had received. Even if his identity is revealed pretty soon to be a gigolo, he gets caught up with another conflict- a murder that he didn’t commit. The lady speaking through the phone accuses him of the crime and threatens with the CCTV footage that is constantly being recorded. Meanwhile, Sakshi Rao (Samyukta Hornad), an aspiring actress, enters the mansion which is followed by the kleptomaniac auto-driver’s entry. This is the same driver, whose petty theft leads the police to know about crime in the first place. Eventually, the wife of this murdered man enters the narrative only to find out of her husband’s shocking death. Not giving away much of the crucial plot-points further, the sense of mystery is cleverly made to linger over by the makers, throughout its runtime. 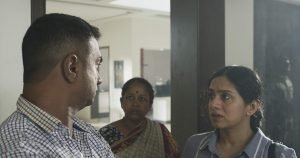 It almost plays a Rashomon of ideas in the sense that we, as an audience, are made to figure out the most truthful tale among the ones that are presented. The truth behind the culprit doesn’t matter as much as the story you ultimately choose to believe in. The ultimate truth is immaterial to the facets that it shows to portray how the characters think or act. Meanwhile, there can be many observations about what the role of women is reduced to in the society or about the film industry in general, for it being used as connective tissue. But, never does the film engage in sharing a preachy social message, rather focuses on the intentions and the roots of what makes a person behave like that. And all of this happens when all the characters are in greys, which makes the film even more compelling.

The performances seem natural from every cast member, which complements the realism that the director tries to achieve. The use of sync sound for most of its duration with the cleverly shot footage inside of the mansion adds even more authenticity to the film. Besides, the shifts between different timelines help to further establish the mosaic of ideas as intended. And with the characters juxtaposing with one another, it seems appropriate. While Sakshi, the aspiring actress, is forced to marry out of the social pressure, the 30-something female film-editor is marrying a much older film-producer. Everything plays a role in the bigger picture.

The only problem perhaps is that the film is longer than what the subject requires, making the standout moments often feel flat. If some of its unnecessary scenes were cut to get to the point, the narrative would have been even crisper to share its clever punches. And it does have a bunch of those while presenting its humor in subtle ways. One of the instances that I clearly remember is the pop-track ‘It’s hard out here for a pimp’ playing in the background during the discussion between a cop and a casting director! Moments like these will almost pass by if you don’t pay attention to such details.

But as mentioned before, these punches along with the brilliant character arcs are not highlighted because of the length. That has to do with its original soundtrack which unnecessarily drags the narrative. I’m all in for a track that serves a purpose for the narration, especially the ones from this film, which expressed characters’ emotions and the motivations precisely (thanks to the subtitles). Even a particularly eccentric track about Weed and its related implications on the narrative is so catchy yet moody, that uplifts the overall film. On the other hand, some of the musical numbers felt unnecessarily added for the sake of it, which disturbed the overall flow. For a suspense thriller, the mood depiction needs to be present to the degree not to lose focus on its basic conflicts. While Arishadvarga succeeds in some of those, it dilutes its impact by the others.

“ARISHADVARGA” WILL BE SCREENED AT THE 10TH LONDON INDIAN FILM FESTIVAL, 2019
CLICK HERE FOR OUR COMPLETE LIFF COVERAGE

Reason (Vivek) [2019]: 'LIFF' Review – A Brilliant Discourse on the Pernicious Rise of Religious Extremism in India

Arishadvarga [2019] ‘LIFF’ Review : A Whodunit Thriller About Its Characters More Than The Mystery