Kattumaram (‘Catamaran’, 2019) marks the feature-length directorial debut of Swarnavel Eswaran, a documentarian and a professor in film studies. Filmed in the tsunami-ravaged fishing community in South India (Akkampetai, Karaikal district), Kattumaram revolves around a middle-aged fisherman named Singaram (Mysskin) who grapples with the realities of diminishing fishing trade while also frantically engaged in finding a groom for his niece, Ananthi (Preeti Karan). The 2004 Indian Ocean tsunami has deeply changed Singaram’s life, obliging him to take care of his orphaned niece and nephew, a school-going kid (off-springs of his two younger sisters lost to the giant waves). Ananthi teaches in the local school and wards off her uncle’s efforts to get her married. This only increases Singaram’s fixation to find Ananthi a better suitor.

Ananthi rides her cycle to the school. In a long-shot, we see her approached by a bike rider. We may think this is the outsider with whom Ananthi will eventually fall in love and elopes. The rider, however, happens to be a woman named Kavita, asking way to the rural school where she is to briefly work as a photography instructor. But the thought of romantic connection brought up by the long-shot isn’t entirely averted as Ananthi’s tenuous friendship with Kavita gradually leads to something more. After a short verbal altercation with her father, Kavita confesses to Ananthi about the death of her lesbian partner, and her family’s insensitivity to arrange marriage.

Despite the huge transformation brought about by tsunami, the community is still very conservative and the news of Ananthi’s sexual orientation might send shock waves. Singaram, however, is shown to be relatively progressive who often talks of marrying his widowed childhood sweetheart. Yet it might be difficult for him to instantly come to terms with Ananthi’s feelings and to save the pair from the enraged, hypocritical village community. Kattumaram ends on a hopeful note, imparting the necessity to drift away from tradition and culture when it obstinately rejects the need for evolution. 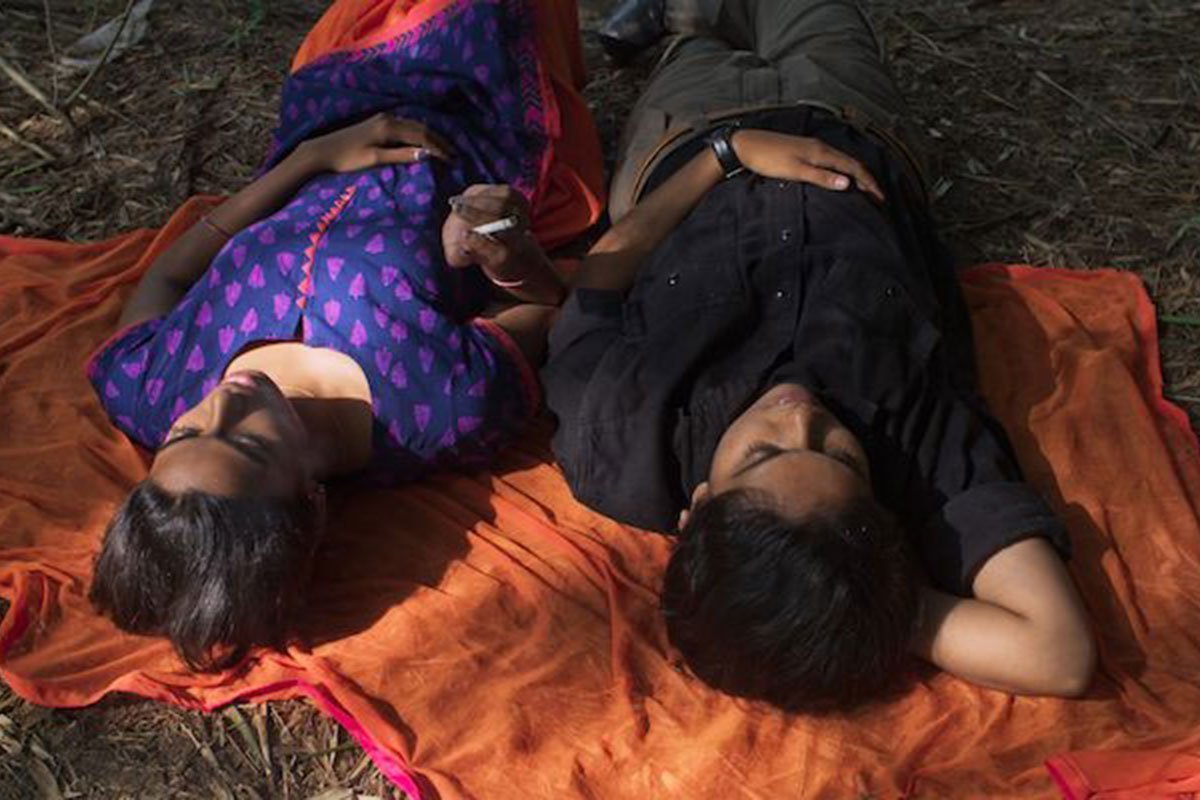 Kattumaram might be one of the rare attempts at queer cinema from South India. But I felt the attempt is often foreshortened by a very predictable narrative that lacks emotional depth. The supremely pared-down style is definitely interesting. For instance, in the opening distant shot of seashore, we see a family being welcomed by Singaram; a brief moment later, in a similar shot, the same family hurls invective on Ananthi. This minimalist way of potently describing the central conflict doesn’t extend to building the characters. The stereotypical characterization and bland dialogues keep us at arm’s length, failing to evoke any emotional resonance. When the nature of Kavita’s conflict with her dad is revealed, we can easily discern the narrative arc from then on. But the problem is not just the predictability factor; it’s the dull moments that lead to that.

Mysskin’s Singaram intrigues us initially, particularly the way he cares for his niece and the manner he empathizes with a neighbor woman involved in an extra-marital affair. The character’s engaging factor also has something to do with Mysskin’s flawless, expressive performance. In the later portions, Singaram’s behavior turns too erratic (hardly conveying any deeper insights into the character’s mind), further rendering his realizations very unconvincing. The plot here is not in service of the minimalistic style. Hence the aesthetics works in bits and parts. Similar to the fascinating opening scene, the sequence where Singaram confronts the lewd police inspector or the one where Singaram calmly watches Ananthi – again a beautiful long shot — tackling a corrupt womanizer works perfectly due to the style employed. But at mere 73 minutes, one could feel the narrative arc would have been more organic if the characters were given some breathing space to evolve.

The basic staging is poetic to an extent (the nephew questioning his uncle under the moonlight or the shot of Ananthi sitting on catamaran facing the windswept seashore), but as the narrative progresses, I repeatedly felt the distance between the effect the director is striving for and what he actually ends up with. The big emotional leaps taken in the name of minimalism or ‘pure cinema’ only accentuates the shallowness of the narrative. I couldn’t understand the importance of Alankaram, a transgender barber (or the fellatio he performs on a stranger). In Merku Thodarchi Malai (‘Western Ghats’, 2018), we see a crazy old woman roaming the mountains after having seen her husband, trampled by elephants. Her fate doesn’t have anything to do with the plot, but it resonates with the film’s larger theme of human’s perpetual conflict with nature. Alankaram on the other hand, as his name implies (in Tamil), only comes across as a flimsy decoration to establish the film’s queer factor. All surface and little depth eventually turn the well-performed and captivatingly stylized Kattumaram into just another shallow exercise in the canon of queer cinema.

“KATTUMARAM” WILL BE SCREENED AT THE 10TH LONDON INDIAN FILM FESTIVAL, 2019
CLICK HERE FOR OUR COMPLETE LIFF COVERAGE