Nulle Trace (2021) Review: In a minimalist, thoroughly dystopian future, a middle-aged smuggler, a lady named ‘N’, attempts to cross the borders. Among the many things she is smuggling to this strange new land are a young, pious woman and her child. Inevitably, the tale becomes one of the inescapable destinies and linked narratives. To this, filmmaker Simon Lavoie instils empathy and desolation, which carries a lot of blooming potential.

Cinematically speaking, there’s a lot of competence and craft that goes into making Nulle Trace: the world-building is intense, with the right amount of tension and a constant sense of urgency. The film also has an immersive sound design and would have done wonders as a theatrical experience with 3D layers. The attention to detail took my breath. On the surface, the film has every right to become one of the strongest films of all time.

Yet, it barely skims the surface. The sense of tension feels a tad artificial because it doesn’t live you thrilled, affected or cold. It disguises its callous ambition with the skilfully mounted frames pulled out of the arthouse canyon. There are parts in the film where you might wonder if there’s any sensitivity to whatever the fuck is happening on the screen. The film achieves the emotional conflicts emerging out of a battle between the human and his necessities but the effort doesn’t feel earned. 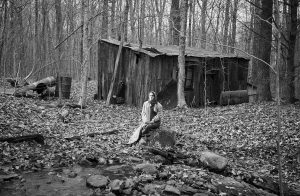 The artistic choices of Simon mark a director brimming with raw talent. Frankly, there’s a lot of ingenuity in the film’s radical expression. Everything feels drastic and distraught, and rightly so. This is a film set in a parallel universe, a land suffering from the battle between science-fiction and dystopia. What is needed though, was raw energy and an existential sentiment. The title, Nulle Trace, implies this statement on the face of the viewer: there’s no trace of chaos, and yet, the experience is far from serene. It is chilling, discomforting, and fierce. It is a rigorous tale of an unremarkable human connection and there’s no trace of conventional entertainment or emotion here.

ALSO, READ: LEAVE NO TRACE [2018] REVIEW – A SUBTLY POWERFUL TALE OF LIFE ON THE FRINGES

And yet, in the pursuit of discomforting the viewer lies an attempt to exhaust the audience. I, for one, don’t buy that for a cinema experience. The film is decidedly divisive in its tone. Some will buy into its unflinching commitment to its central narrative and some will be left pondering over how much it left unexpressed. I, unfortunately, would be among the latter. Also, with such a basic structure, Nulle Trace still feels stretched through its two-hour running time.

My biggest disappointment with Nulle Trace is its mild, uninspired writing: what could have been poetic, is as thin as a wafer instead. You can’t accuse the screenplay of indifference or artifice, because the film builds its world with unapologetic conviction. But it feels that the women, despite being worn-out and hard, are hardly caught up in the existential dilemmas. They don’t seem to make sense of their surroundings. ‘N’ for one is an interesting character to explore: we don’t know where she, and her simmering restraint, come from. The film never manages to examine her desolation, thus leaving her character devoid of layers, and worse, even half-baked.

But I loved how delicately the Canadian director delved into the faith and piousness of Awa, a mother on an escape. Although we are never suggested where she comes from, she is clearly a Muslim, and thus a cultural minority. The film still manages to establish Awa’s identity beyond being a believer. She is why Nulle Trace’s central theme of faith and human connections feels well-earned and culturally significant, complete with a lot of flair. The film is technically sound: the cinematography and production design by Simran Dewan is impressive and immersive in equal measure. It more than makes up for the jarring use of eerie dystopian background music by Jean L’Appeau and the switching of aspect ratios in the constantly busy editing of Mathieu Bouchard-Malo.

Nulle Trace is a visually stunning film about faith and human connection. The anxiety is induced cleverly, making for a truly solid thriller. But the quietude feels undone and rather arrogant due to the tedious, unsubtle writing.