Jurassic World: Dominion is yet another film in this universe that has humans alongside dinosaurs. Five movies into the franchise, we low-key expect grizzly scenes of the crunching of bones as these prehistoric beasts see humans as savory courses rather than friends. This holds true for films deeper into the trilogies as the opening installments have elements of control, at least for the opening few minutes. Given the progress of Jurassic Park 3, audiences may have been expecting Jurassic World 3 to be a carnivore savage fest. We get that to some extent in JW: Dominion, but after being made to wait a while. Much to the pleasure of the queasy, director Colin Trevorrow ensured Jurassic World: Dominion didn’t stray into that territory.

The dinosaurs were at parks, breeding islands, more parks, and yet another breeding island. That got repetitive and formulaic, but it is what is expected from a film in the Jurassic verse. However, Trevorrow’s story and the screenplay by him and Emily Carmichael found a balance with what the climax of Jurassic World: Fallen Kingdom promised us.

John Schwartzman’s camera provides visuals that will leave you wide-eyed in the first few minutes as it captures the reality of dinosaurs among us. The scenes captured on his lens will leave one and all on the edge of their seats as the film progresses. It is exactly as the voiceover described: unpredictable, and violent when hungry.

Carmichael and Trevorrow’s screenplay presents the brutality, velocity, and savageness of the dinosaurs. The climax, which also serves as a nod to the series logo, permits the beasts to take the spotlight. Another scene where DeWanda Wise (Kayla Watts) and Chris Pratt (Owen Grady) glide to survive on the ice is yet another nod to the makers for their efforts to enhance the dinosaur’s fear level. Velociraptors, Tyrannosaurs, Giganotosaurus, etc. cause the audience to miss a beat and have their heart in their mouths at numerous portions throughout the film. The stunts and the close shaves are ideated and executed well, which helps Jurassic World: Dominion lives up to expectations.

One that stands out is the scene inspired by James Bond from Skyfall involving dinosaurs in Jurassic World: Dominion. It served as a unique chase in this film series. While we know that producers will always refrain from doing away with a major character midway through the first half, the scene was too close to comfort for Grady.

Colin Trevorrow ensured these scenes weren’t too swift, nor was there an abundance of anticipation before the next dinosaur’s next (un) successful snap. The scene where Clarice evades a Giganotosaurus is another work of art that will go down in the film series’ lore. Apart from that, the scenes make you jump, but not because they are excellent, but because dinosaurs are scary. Dominion gets that right, but why do these people keep crossing paths with these animals? Is it because these brutal savages that move fast, become buffoons when they encounter the protagonists?

The repetitive reduction of savage animals to clumsy chasers may have you rolling your eyes. A film that came to my mind while watching Jurassic World: Dominion was Scream. Remember how Ghostface seems to overrun and crash into every possible object while he chases a to-be victim? That’s how thick the dinosaurs appear; especially the agile velociraptor. When the humans tiptoe around a car, it’s almost as if you are seeing an episode of Scooby-Doo as the villain cartoonically peers around the corner. Why wouldn’t a dinosaur just go straight and crush the upturned vehicle? I even remembered one still from an iconic franchise helmed by the original director.

Jurassic World: Dominion kind of finds balance between past and present and ensures that it is a fitting conclusion to the Jurassic World Trilogy or even the Jurassic Film Series. Fitting as it brings things full circle, but not at all memorable, as it appears that the makers didn’t carefully observe the characters’ characteristics in Jurassic Park before scripting this one. Why would someone who put her hands in a mound of shit be revolted by a bug?

They did give Jeff Goldblum a hilarious line to delight his fans in one of the reasonable amount of scenes where the animals attack and attempt to ‘have a meal.’

What’s good in Jurassic World: Dominion is that neither the original cast members (Sam Neill, Laura Dern, Jeff Goldblum), nor the new cast members (Chris Pratt, Dallas Bryce Howard) overshadow the other as their threads intertwine. That’s more for the former, as the latter duo didn’t really attempt to make this film about them. Chris Pratt doesn’t really get the time to shine in what is a massive ensemble. Bryce Dallas Howard’s first scene in the jungle is an absolute stand-out. Meanwhile, the original trio makes the most of the attention they know they will get and hit a home run to save this offering from total disaster. 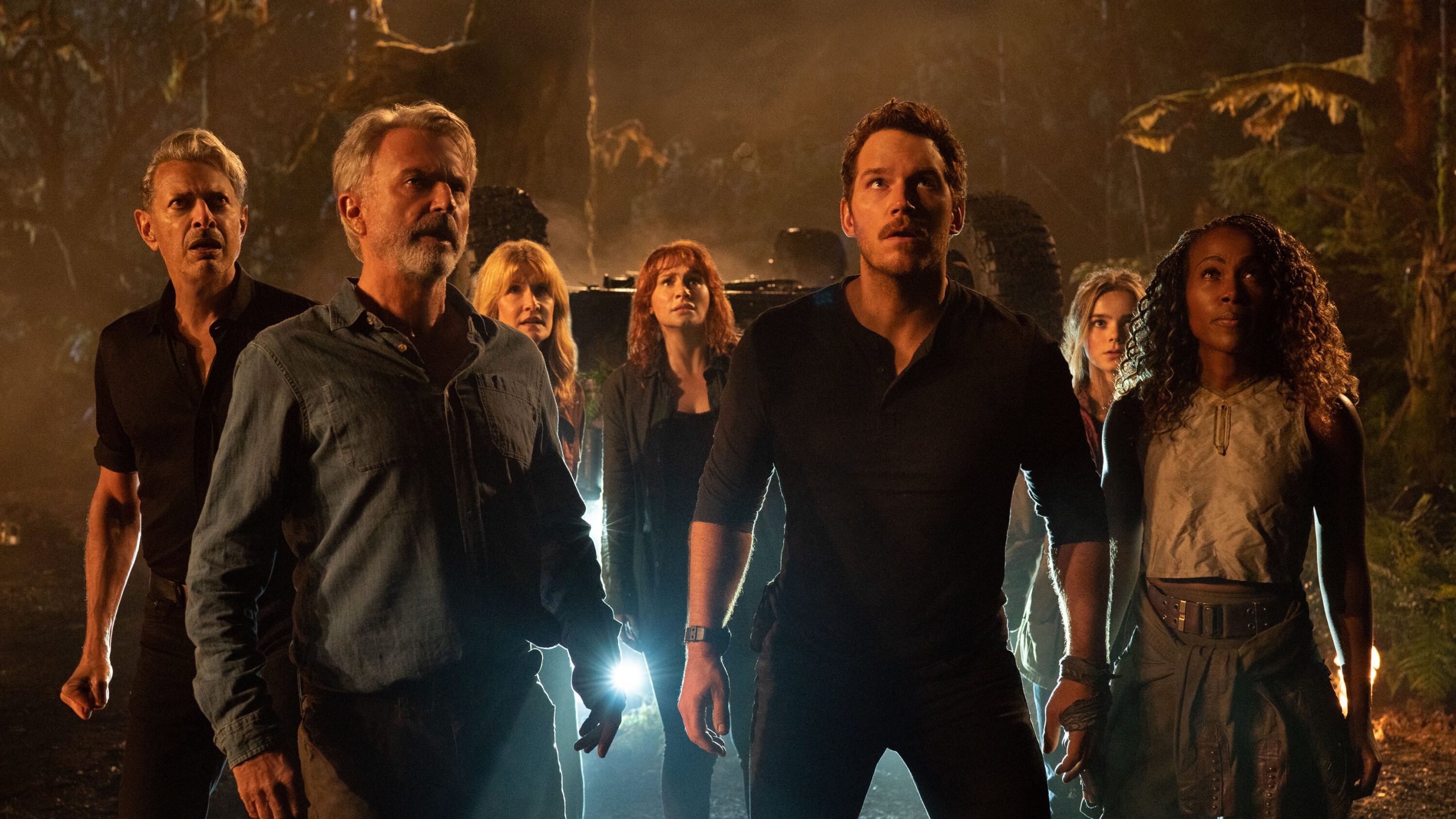 The Jurassic Park (1993) trio faces situations that mirrored their previous combined on-screen adventure. It’s good that neither Grant, Sattler, nor Malcolm have to refer to it verbally. Reminiscing about being involuntary bait in the past is not something anyone would do even if there is a sense of déjà vu in Jurassic World: Dominion.

We may not have missed Pratt and Dallas Howard, but Dern, Goldblum, and Neil would have been missed. Would the absence of the film have given the newbies time to shine? Perhaps. But that would have stripped away the elements of the past that provide details for the story.

The throwback references, bone-chilling scenes, and addition of the original Jurassic Park theme don’t mask the issues. This film’s title just seems too stretched. Dominion doesn’t reflect an extremely straightforward title, as neither human nor dinosaur is trying to establish sovereignty or control. There is a party trying to do this, though, but having dominion in the title seemed a tad off.

The idea of a human making a promise to a dinosaur seemed far-fetched and even has quite incredulous dialogues directed toward it. Huge dinosaurs just roaming the streets in Malta and devouring patrons seemed confusing; why would civilians just throng an area that had two humongous prehistoric creatures? They didn’t pop up suddenly; those were the two tailing Owen Grady

A blessing from Jurassic World: Dominion is that it should be the final film. Unless, of course, a sanctuary becomes a park. Didn’t that happen last time around? Theme park Jurassic World proved to be an upgrade on the Jurassic Park location.

Related to Jurassic Park: Dominion – The Bob’s Burgers Movie (2022) Review: A Delicious Meal For Fans and a Tasteful Treat For Newbies

Dominion is way better than Jurassic Park 3 and there are only so many times anyone would be able to buy the idea of supposedly extinct mammals being around/chasing humans. Isn’t it good to walk away on a high? It’s a luxury the makers of the atrocious third films didn’t have. Names that come to mind are Night at the Museum 3, and Big Momma’s House.

Jurassic World: Dominion isn’t exceptional, but it’s highly doubtful that anyone shelling out money for Jurassic Film would expect a nuanced film with an Academy Award-winning story. It could be represented at the Oscars with technical nods.

This one is for the Jurassic fans, i.e. the ones who were sold on the formula of the last five movies. This leads to the question- Would you be able to differentiate the events of the latter half of the film from the other installments? Is it just rehashed chase, chomp, and slash scenes with different actors?

Every film does cater to a select audience. Well, here it is then, can you sit through another film where dinosaurs attempt to/consume humans who come up with crafty evasion techniques?

One where humans make escapes via razor-thin margins? If yes, go ahead. If no, well…no.