“The first thing everyone notices and best remembers about The Cabinet of Dr. Caligari (1920) is the film’s bizarre look,” wrote critic Roger Ebert in his 4-star review of the groundbreaking expressionist cinema (which he included in his ‘Great Films’ list). The movie’s jagged two-dimensional landscapes, the tilted interiors, the bleakly unconventional lighting, and the actors’ emphatic expressions carried a distinct stylistic label at a time when the concept of mise en scene was still in the primitive stages. The Cabinet of Dr. Caligari was written by Hans Janowitz and Carl Mayer in six weeks and took less than three weeks for director Robert Wiene and his cinematographer Willy Hameister to shoot. Nevertheless, the most memorable trio who are often associated with the picture’s fascinating macabre elements are the set designers, Hermann Warm, Walter Reimann, and Walter Rohrig.

Warm, Reimann, and Rohrig after receiving the approval of director Wiene and producer Rudolf Meinert flooded the set with flat light and then painted shadows directly onto the ground and walls. In the book ‘The Story of Film’, author Mark Cousins calls this as “an effect to stylize the look of naturalistic film lighting, almost to ridicule it.” Of course, compared to making realistic sets and shooting in real locations, these stylized sets were very cheap (cost just less than $800). Why did they decide such crazy sets would express the themes of their story better? Most importantly, what is the Expressionist movement in cinema? Between 1918 and 1928, German film-makers (primarily Robert Wiene, Fritz Lang, and F.W. Murnau) deeply influenced by the Expressionist theatre designers and painters (originated in the beginning of 20th century) tried to capture their subjects’ subterranean emotions or hidden, repressed feelings. 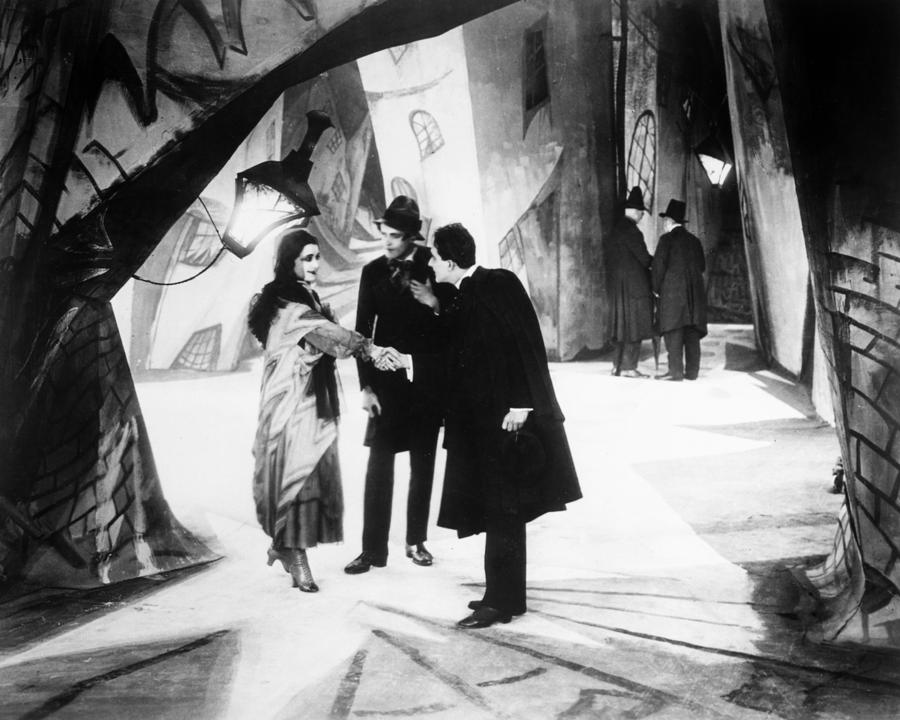 The rapidly expanding German film industry in the late 1910s was also partly responsible for the explosion of expressionist cinema. Despite Germany’s defeat in the First World War and its freefalling economy, the Weimar Republic (1918-1933) encouraged and prioritized film productions. But as mentioned above, the German Expressionist cinema didn’t just try to offer dramatically boosted psychoanalytic reading of delusional subjects. It’s concerns, particularly Caligari writers’ (Mayer and Janowitz), were also political (Mayer would later write the script for Murnau’s timeless classics, The Last Laugh [1925] and Sunrise: A Song of Two Humans [1927]). Siegfried Kracauer’s 1947 book From Caligari to Hitler took up the discussion of the film’s political dimension.

Related to The Cabinet of Dr. Caligari — 15 Best Movies Set in a Mental Asylum

In the ambiguously coded story, the obsessive, all-controlling Dr. Caligari allegedly represents the malevolent German state, whereas the subservient yet monstrous Cesare is supposed to represent the ordinary German public. In the context of the punishing Treaty of Versailles, it suggests that the sleepwalking German citizens are heading more towards a dreadful uncertainty. However, director Wiene and one of the producers Erich Pommer watered down the narrative’s political edge through its high-art credentials and extreme stylization. Mark Cousins in The Story of Film enunciates that there was a more concrete reason behind Wiene’s decision; that the director’s actor father became mentally unbalanced towards the end of his life, and hence the son showed more interest in the insanity aspect of the story.

The Cabinet of Dr. Caligari opens on a garden bench. Young Francis (Friedrich Feher) earnestly starts narrating to an elderly man sitting next to him, the horrific events in his life that has mentally disturbed his beloved fiancée, Jane (Lil Dagover).  Few months before, an ominous sideshow operator named Dr. Caligari (Werner Krauss) arrives at the hilly terrain of Holstenwall. A scowling figuring in all black (wearing a trench coat) descends from the dark horse-drawn carriage and the horses dreadfully shrieks as it climbs the paper-constructed steep hills. It was the time Francis, his lover Jane, and his good friend Alan (Hans Heinrich von Twardowski) formed a sort of awkward ménage a trios.

Upon his arrival, Dr. Caligari approaches the local town clerk to grant him a license to perform his act in the carnival. The doctor is brushed aside and made to wait. The result: the town clerk is found murdered next day under mysterious circumstances. At the carnival, Dr. Caligari unveils his star of the show: a supposedly dangerous somnambulist, Cesare (Conrad Veidt) who only awakens when the heavy-browed doctor commands. Alan and Francis visit Caligari’s show. Fascinated by Cesare, Alan approaches the tall somnambulist and asks, “How long will I live for?” to which Cesare menacingly replies, “Until dawn”. The friends say their goodbyes, and decide to keep alive their friendship regardless of Jane’s choice. Next morning, Alan is found murdered, stabbed to death. Francis naturally suspects Dr. Caligari and confesses his doubts to Jane’s father, Dr. Olsen.

As expected, the inept authorities find no evidence to connect Caligari to the crime and the case remains open. Francis begins to secretly observe Caligari’s dingy trailer and the cabinet where Cesare sleeps. The story takes surprising paths when Cesare attempts to kidnap Jane from her house, at the same time Francis is keeping an eye on the somnambulist. More intriguing is the unveiling of Dr. Caligari’s real identity and his purely evil purpose (to sow chaos & mistrust in the society). Then there’s the pulling-the-rug-out-from-under kind of climax twist that incites more debate. The final revelation expresses that the terrified Francis is actually an inmate of mental asylum. He is straitjacketed and confined to a room. The now benign Dr. Caligari, Francis’ physician, examines him and announces that he now better understands the man’s delusion. Therefore, the whole film becomes the twisted dream of Francis’ deranged mind. 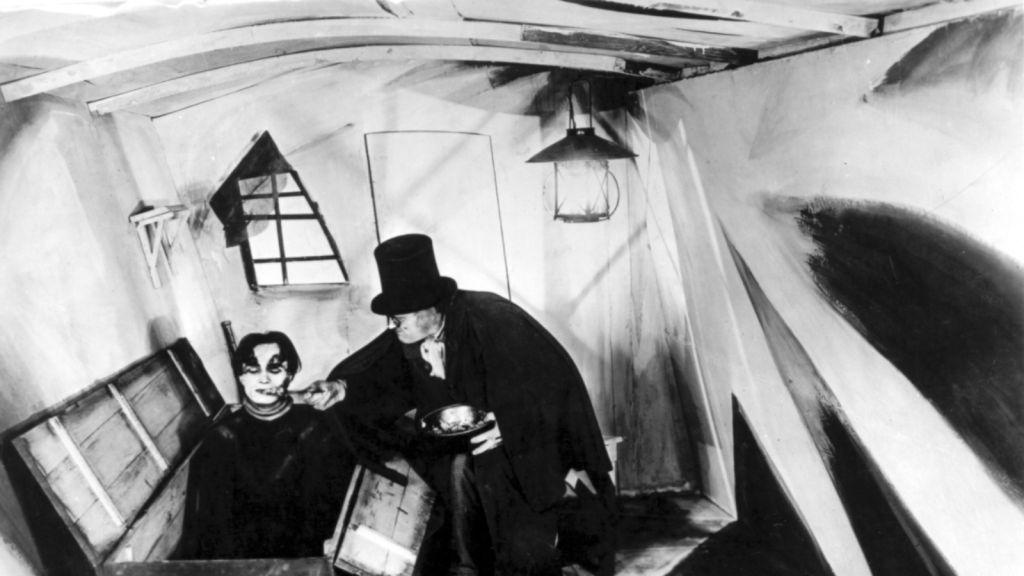 As mentioned earlier, Wiene supposedly added scenes at the beginning and end of the narrative (turning the large chunk of it into a flashback) to dilute its political bite. Nevertheless, this made film historians and scholars to wonder whether expressionism in The Cabinet of Dr. Caligari led to the focus on imagery and construction of unique cinematic worlds. By turning the narrative into the vision of a madman, director Wiene seems to offer a reason behind the sliced, jagged spaces and bizarre angles. The intention to clearly instill an anti-authoritarian commentary might have got lost under the creepily disconcerting ending and surreal atmosphere. Yet in the process, Wiene may have (unintentionally) created a psychological horror, and this was before the horror was even a genre.

It’s easy to accept the perception that Wiene’s world represents Francis’ mental state. But as Mark Cousins observes (in The Story of Film), the ‘imagery stays unconventional’ even when the viewers are taken out of Francis’ distorted worldview and are presented with the ‘normal’ world (of the insane and their physicians). The triangular geometry of mental asylum’s rooms, showcased in Francis’ story, remains the same when the gentle Dr. Caligari confines the straitjacketed Francis. It’s not known whether such ambiguities were deliberately included or not. All the same, such details make the film bewitchingly complex and layered than what the thin story-line suggests.

Unlike his fellow expressionist film-makers, F.W. Murnau and Fritz Lang, or his contemporaries, Ernst Lubitsch, Robert Siodmak, and Edgar Ulmer, Robert Wiene didn’t move out of Germany. Between 1912 and his death in 1938, Wiene was said to have worked in ninety film productions, most of which are entirely lost (particularly Wiene’s pre-Caligari works). Apart from The Cabinet of Dr. Caligari, Wiene’s films are yet to be rediscovered (I have seen his 1923 film Raskolnikow and Hands of Orlac [1924]). And irrespective of the tepid commercial or artistic success, Wiene comes across as one of the important early film-makers to have relentlessly tried to stylistically elevate the cinematic medium.

The German expressionism as a cinema movement didn’t last for more than a decade. But it’s dark shadows of influence extended across the world, from the lights-and-shadows-emphasizing film noir to the nightmarish mindscape imagery of David Lynch, and Tim Burton’s macabre world of art (The Nightmare Before Christmas overtly wears its Caligari & German expressionism influence). Analyzing each separate entity of The Cabinet of Dr. Caligari, such as the plot, the set design, camerawork, and the acting we can discern how each of it looks crude and unsubtle. Yet, on the whole, it all coalesces pretty well and creates a thoroughly engrossing movie experience. Eventually, it’s vital to understand that the century-old Caligari was made at a time when the cinematic art was gradually trying to spread its wings. It was striving to forge a unique visual vocabulary that would lessen the domination of other arts.