Anyone growing up in the 90s and mid-2000s in India, to a certain extent, knows what it feels to be a fan of great, commercialized action flicks that went missing in the last decade. My relationship with Indian films of the action genre has lately been one-way of sorts. That was until I watched Lokesh Kanagaraj’s “Kaithi” (2019), which became one of the most exciting and thrilling films I’ve watched in a long time. Vikram is set in the same universe as Kaithi, the 36-year-old writer-directors new film compounds the living myth of legendary actor Kamal Haasan by imposing his magnetic personality onto a similar template. The result is an almost 3-hour long film that never has a dull moment, making it one of the most joyous rides at the cinema in the last couple of years.

Vikram is a ghost. After a loud action set piece in the first act, which also sets up the film’s plot without wasting much time, we later learn about his present life through vignettes of his acquaintances. Like a distorted memory, everyone seems to have a different account of his personality. This brings into the picture investigator Amar (Fahadh Faasil)– an agent in the government’s secret Black Squad- who tries putting different parts of the jigsaw puzzle in place. In the first half, he almost carries the film on his shoulders, which plays out like a racy thriller; the film cuts between different scenarios, building up intrigue through a heart-thumping background score. Here, we’re also introduced to druglord Santhanam (Vijay Sethupathi), who is missing a vital consignment (set up in “Kaithi”) and is being harassed by his unseen boss Rolex.

Vikram is paced at a breakneck speed, giving room for its big action set pieces in the latter half by setting up its thin plot first. At times, it might feel like Lokesh is overstuffing the storyline with too many players and their ambitions, but it never really drags the film, thanks to the brilliant actors on screen. Over and over is devoted to the mystery of just who Vikram is, while we discover Sethupathi’s Santhanam in his two gold teeth and a colorful wardrobe. 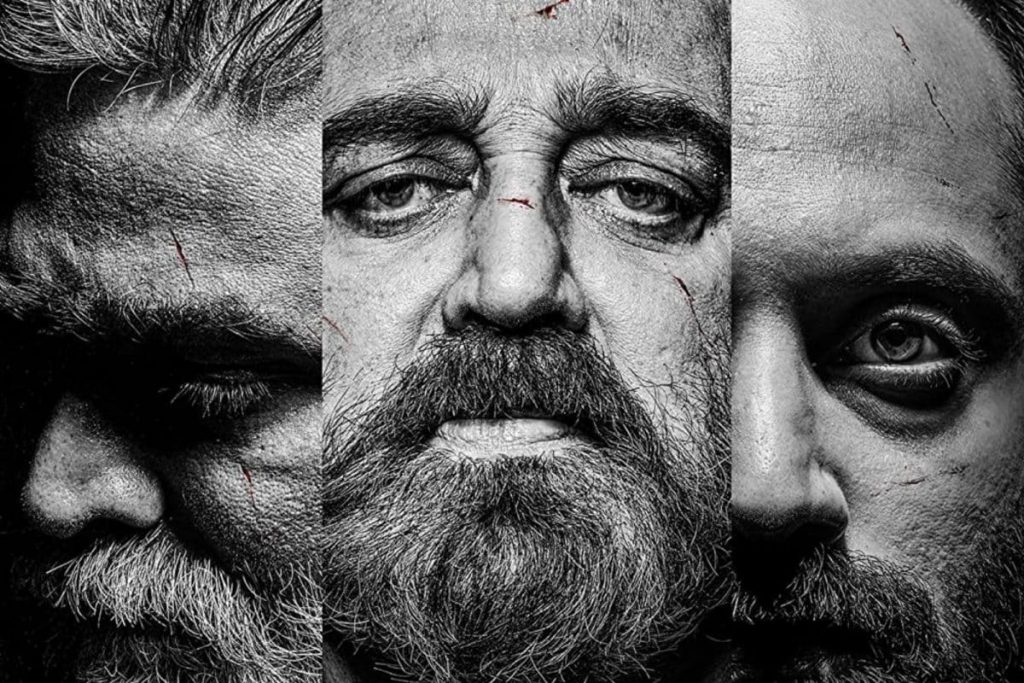 The film shares a lot in common with Lokesh’s career-making 2019 film, especially its visual flair. But the beating emotional core here never really takes off, as the film steers off in the second half in setting up the potential for at least three spin-offs/sequels in the same universe. Does that problem sound familiar?

It’s the rarest of rare films where hardcore fans of Kamal Haasan can sit and admire the action play out on screen as the actor-turned-politician looks back at his rich legacy while having a blast. The filmmaker seems talented enough to set up the intrigue of what’s to come without making us drive past Haasan’s star power. In fact, Vikram almost takes on a meta-quality in its second half as the actor himself references his older films.

There are enough nods to make fans chuckle and hoot, yet the film never feels above the audience. Lokesh and the team pull off a fabulous job by treading the thin line of making an utterly self-aware film with three giant stars at its center. It’s something that Bollywood, clearly, has failed to do in the recent past and something that the makers of “The Expendables” can sit and envy.

In his films, Lokesh’s mastery over world-building takes over “Vikram” as well. There are things constantly happening in the foreground and in the background. Notice, for instance, how Vikram prepares milk for his grandson in the movie’s first half while grieving a certain death, which is paralleled later when he does the same while silently taking down a team of men. Here, the hand-to-hand combat sequences remain some of the best I’ve seen in an Indian film in recent memory.

Cinematographer Girish Gangadharan, who had won a National Film Award for “Jallikkattu”, matches the sharp camera movements with the movie’s pace. Even in the middle of all the high-stakes action, the filmmakers give room for emotions to settle, though not the kind provided in “Kaithi”. After learning of a leg trembling news, Aman enters an empty grey room as we cut to a wide shot of him standing alone, as the investigator realizes that now there are personal stakes involved. The hazy shot of him walking barefoot in sweat is crosscut with Vikram entering a room with shattered glass on the floor in his black boots. It’s through such sumptuous detailing that the film moves with a bristling intensity towards its climactic explosion (literally).

“Vikram” remains consistently engaging even if it doesn’t reach the cinematic highs its massive star-power could’ve collectively provided. Sethupathi’s proven ability to deliver dashed-odd lines with a song directly referencing his character to that of Pablo Escobar playing in the background adds enough malice to Santhanam- but sometimes, he almost comes across like a parody.

Nevertheless, “Vikram” is our own household summer action- an extravaganza that comes a week after Hollywood’s biggest action blockbuster in recent memory. And that’s a rare feat- one that especially fans of the genre need to seek out. By the end, you know the pile-up is turning into something too much, yet not enough.