For years – during and after Hoover’s regime – Hollywood has largely served as the propaganda arm of Federal Bureau of Investigation (FBI); the archetypal straight white men protecting the ‘home of the brave’. So it’s a welcome sign that the industry has now gotten bit non-conformist by looking into the darker deeds of bureau. The recent documentaries Who Killed Malcolm X (2020) and MLK/FBI (2020) detailed the lengths the bureau went to discredit and destroy the black civil rights movement leaders. Shaka King’s Judas and the Black Messiah (2021) offer the essential dramatic account of FBI’s aggressive surveillance and eventual assassination of 21-year old Fred Hampton, the deputy chairman of Illinois Black Panther Party (BPP).

Bolstered by Daniel Kaluuya’s rousing performance as Hampton, Judas and the Black Messiah opens in the year 1968, a momentous year when the radical activist made great strides with his revolutionary inclusive politics which unnerved the state apparatus. Among the spectrum of black civil rights activism, BPP was the most misrepresented bunch. Referred to as ‘black nationalist hate group’ and likened to Ku Klux Klan (KKK), the Black Panthers’ radical left-leaning politics unsettled the political establishment more than their guns. Edgar Hoover who always dreaded the rise of a ‘Black Messiah’ called them ‘the single greatest threat to national security’. And his FBI vehemently targeted BPP with COINTELPRO (counterintelligence program), as it previously did with Dr. King and Malcolm X. 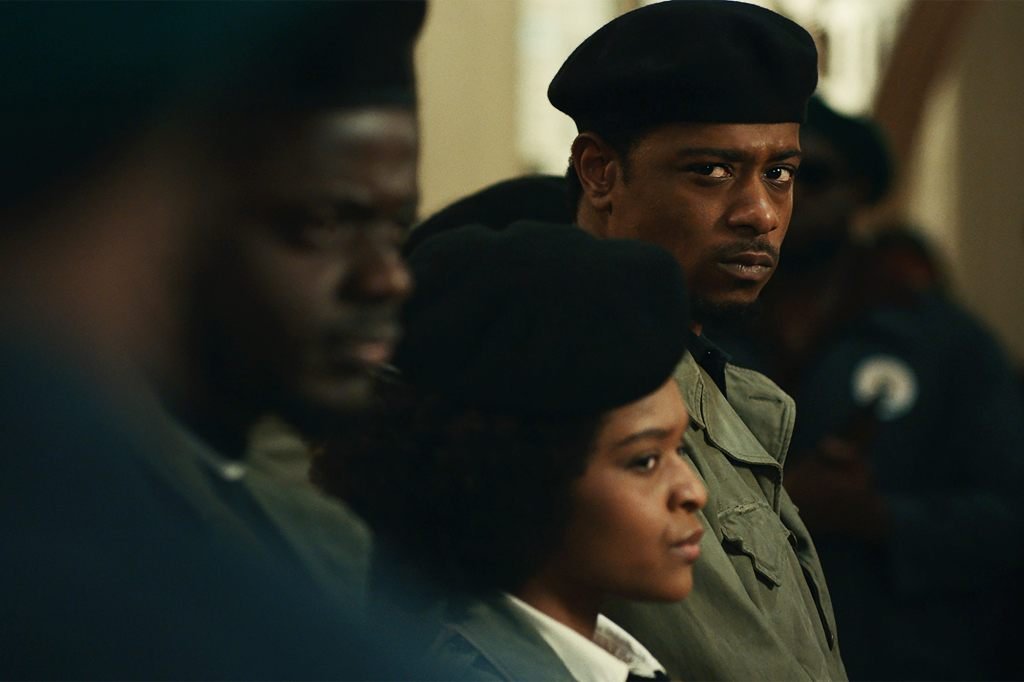 Unlike Spike Lee’s biographical epic Malcolm X (1992), Judas and the Black Messiah doesn’t provide a well-rounded portrait of Fred Hampton and his politics. As the title implies, the narrative chiefly focuses on the campaign of sabotage launched by FBI through one of its informants William O’Neal (Lakeith Stanfield), a car thief who infiltrated the organization and became the chief of security for BPP’s Chicago chapter. Still writer/director does a good job by not sanitizing or stripping off the sting of Hampton’s anti-capitalist politics.

It does feel that the writers (King & Berson) are elusive when it comes to emphasizing Hampton’s particular kind of anti-capitalist stance. Hampton recognized himself as ‘Marxist-Leninist’, not as a socialist which is a relatively moderate term. Nevertheless, Kaluuya’s bewitching presence totally overpowers us as he strikes the right balance between stoking the righteous fury of the oppressed and bestowing political insights. The vulnerability and world-weariness Kaluuya exhibits in the man’s private life he shared with Deborah Johnson (Dominique Fishback) adds depth to the personality. In fact, the actor is so astoundingly self-assured in playing Hampton that one could strongly yearn for a rich character portrait of Fred Hampton, instead of equally focusing on his killers.

Shaka King’s feature deftly dispels the myth that Black Panthers are gun-toting terrorists. The Panthers’ Free Breakfast Program and Hampton’s initiative to build the multiracial ‘Rainbow Coalition’ by joining hands with various black activist groups, radical Puerto Rican organization, and even a poor white group of militants shows how much they were a community-based organization. Though Hampton was often censured for his controversial remarks pertaining to police brutality, he deeply understood the significance of building allies and community hubs. That’s what made the Panthers a ‘threat’.

There’s a sort of half-hearted attempt in Judas and the Black Messiah to comprehend the actions of O’Neal, particularly the reconstruction of 1989 PBS documentary of William O’Neal serves no purpose. Having said that Lakeith Stanfield does a good job in capturing the enigmatic nature of O’Neal. There’s no doubt about the villainy of the man’s deeds. Yet, Stanfield – though his character was underwritten – keeps us wondering about O’Neal’s thoughts or the informant’s many contradictions. In some way, it feels ineffective to include scenes featuring Martin Sheen (hiding behind hideous prosthetics) as Hoover. That time could have been utilized to fill some of the narrative gaps.

But the inclusion of Hoover as a character does serve a purpose. Stories are inherently political, and it is the stories that turned Hoover into one of the icons of white America. In Clint Eastwood’s biopic (played by Leonardo Di Caprio) Hoover was portrayed as a flawed anti-hero, and there was more focus on his repressed sexuality. In reality, the man was a vile racist, egomaniac, abused his power in unspeakable ways, and perpetuated the toxic culture in American law enforcement (in the name of ‘innovations’). Hence, it’s nice to see the true ugly face of Hoover in a mainstream narrative.

By centering the narrative on notoriety of FBI, Shaka King finds the obvious parallels between the past and the contemporary events. FBI’s response after Ferguson protests and its monitoring activities on Black Lives Matter Movement wasn’t far removed from its response to BPP activism.  In one scene, Jesse Plemons’ FBI agent character drops in false equivalencies by calling KKK and Panthers as ‘two sides of the same coin’. In Trump’s America after Charlottesville car attack, similar false equivalencies were made, misguidedly bunching up white supremacists and radical black activists. In fact, FBI’s attempts to criminalize and eliminate African-American social movements persist to this day.  Therefore, the brutal political murder of Fred Hampton and suppression of black movements doesn’t simply come across as a chapter in American history.

As much tragic as it was to witness the final heartbreaking scene of Hampton’s killing, it is frightening to see such state-sponsored barbarity. For a lot of people (including me), it was the lengths FBI and Chicago police authorities went to silence Hampton’s voice was (sadly) an entry point to learn about him. It was the same with how I learned about Patrice Lumumba (democratically elected Prime Minister of Congo) through the ghastly US-sponsored assassination of him.  “You can murder a liberator, but you can’t murder liberation”, Hampton’s words echoes in the world we live right now, although the governments continue to dismiss such lessons from history.