Home»Reviews»OTT»Netflix»Who Killed Malcolm X? [2020] Netflix Review – A Look Into the Life, Assassination, and Enduring Legacy of the Afro-American Activist
Netflix/Reviews

Who Killed Malcolm X is now streaming on Netflix

“It seems that after a person has died, he is reevaluated. But I think that the magnitude of his [Malcolm X] work will be felt around the world”, says the invincible Betty Shabazz, wife of iconic Afro-American leader Malcolm X, in one of the interviews she gave after her husband’s assassination (on February 21, 1965). There’s a greater truth in her words as Malcolm’s legacy continues to thrive as racial issues continue to sweep America and white America’s social system keeps perpetuating disparities.

In life and death, Malcolm X has become the symbol of transformation. A convicted thief, an advocate of racial separatism, a militant religious leader, and a human-rights activist, Malcolm X kept reinventing himself until his death at the age of 39. Immediately after Malcolm’s assassination, The Autobiography of Malcolm X (co-authored by journalist Alex Haley) was released. It was a profound book with a timeless message that made sure this great man’s powerful life story wasn’t buried with him. Then there was Spike Lee’s remarkable (and of course controversial) 1992 biopic on Malcolm X (the titular character phenomenally played by Denzel Washington), which happens to be one of the most important American movies to deal with the civil-rights era. 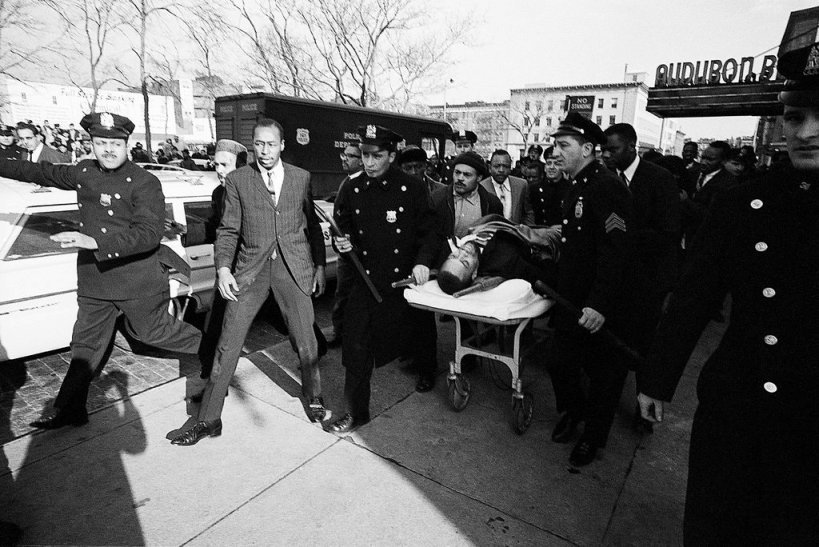 Spike Lee’s film opened with a terrific montage, intercutting between the footage of Rodney King incident and an image of the American flag burning into the shape of an X, laced with a voice-over of one of Malcolm’s incendiary speeches (and ends with an affirmative message from Nelson Mandela). Phil Bertelsen and Rachel Dretzin’s documentary mini-series Who Killed Malcolm X? [2020], available on the streaming platform Netflix (produced by Fusion), also opens with a considerably mild yet a relevant montage of the pictures showing the omnipresent racist policing in contemporary America. As the title implies, the six-part miniseries tries to uncover the identity of real men who allegedly greenlit and executed the plan to hit Malcolm X with barrage of bullets on one quiet Sunday afternoon in Harlem’s Audubon Ballroom.

Phil and Rachel’s miniseries mainly focuses on historian and activist Abdur-Rahman Muhammad’s three-decade quest to uncover all the facts and the holes in the official theory related to Malcolm X’s assassination. The official story is that three gunmen, Talmadge Hayer, Norman Butler (aka Muhammad Abdul Aziz), and Thomas Johnson (aka Khalil Islam) murdered Malcolm X over his acerbic comments directed against Elijah Muhammad, the dubious yet venerated leader of Nation of Islam (in which Malcolm X was a member until 1964). Talmadge Hayer was caught in the crime scene and admitted to his part in the killing, but the other two maintained innocence. Even Hayer at the trial dismissed Butler and Thomas’s role in the assassination. Furthermore, years later Hayer revealed the identity of four other gunmen present at the Ballroom, who all allegedly came from a Newark Mosque in New Jersey.

Yet both Butler and Thomas spent more than twenty years in jail. Thomas aka Islam died in 2009, but Butler aka Aziz, 81, features in the documentary. After the release of the documentary, Manhattan DA, Cyrus Vance is conducting a review on the investigation of Feb. 1965 assassination. But Abdur-Rahman Muhammad (Pulitzer-Prize winning author David Garrow calls him, “the most knowledgeable Malcolm X scholar”) isn’t just content with challenging the official story but attempts to find the real people behind Malcolm’s murder.

Who Killed Malcolm X exhaustively investigates the Newark mosque no.25, from which the uncaught four assassins of Malcolm X supposedly came from. It scrutinizes the role Fruit of Islam, the paramilitary wing of the Nation of Islam, and Elijah Muhammad’s son played in ordering Malcolm’s murder. More importantly, the documentary looks at the role played by the puppet masters: from Hoover’s FBI to the nonchalant NYPD. There’s a suggestion that one of the tops of members of the Nation of Islam (John Ali) was an FBI informant. The bad men of the tale slowly start to emerge. Some like Edgar J. Hoover are long dead. But some like John Ali or the chillingly cynical retired NYPD detective, Tony Bouza are still convinced of their past actions.

In NYPD’s documents and FBI’s elaborate surveillance transcripts, it is obvious the threat Malcolm X posed to the establishment (more as a pan-African human rights activist than as a black separatist leader). Despite his determination and quest to find the truth, Abdur-Rahman’s subjectivity could have easily made him sound as a conspiracy theorist. But series directors Phil and Rachel have taken pains to commit to the camera all the facts (from government transcripts and documents) behind each disclosure. Although there may not be enough evidence to decidedly point fingers at the FBI and NYPD, the documents uncover enough facts to underline their undeniable role in Malcolm’s unraveling. Of course, we don’t need to be deeply perceptive to comprehend how governments tackle powerful dissenters speaking irrefutable truths.

For those who are unaware of the inconsistencies in the investigation of Malcolm’s assassination, some of the information discussed here are so explosive. For instance, the identity of the man who allegedly wielded the shot-gun that took Malcolm’s life or the real identity of Malcolm’s bodyguard, Eugene Roberts. Who Killed Malcolm X, however, is at its best when the makers examine the complicated last year in Malcolm’s life. It poignantly recounts how the man found peace despite the ostracization and numerous death threats. People may question his politics, his changed perspective, but the man stood for freedom, justice, and equality. His words will continue to retain its power as long as the governments treat its own citizens as their primary enemy.