Haitian film-maker and political activist Raoul Peck through swift dramatizations has persistently explored the traumas of post-colonial turbulence. Though born in Haiti, Mr. Peck was raised in Congo, and has attended schools in US and France. He has studied economics and industrial engineering, but immediately after earning a film degree (in West Berlin’s Film Academy) he set out to make his first feature-film in his native land. He followed up his debut feature Haitian Corner (1988) with a passionate documentary chronicling the life of iconic Congolese revolutionary Patrice Emery Lumumba (titled ‘Lumumba: Death of a Prophet’). Like the uprooted African race, Raoul Peck has made films/documentaries in France and America, always confronting the continent’s murky colonial past. Some of Peck’s prominent films include HBO financed TV-movie on the Rwandan genocide (Sometimes in April, 2005), the documentary on American author and social critic James Baldwin (I Am Not Your Negro, 2016), and the historical drama enacting the friendship between Karl Marx and Friedrich Engles (Young Karl Marx, 2017). Nevertheless, my favorite among Raoul Peck’s oeuvre is his 2000 biopic Lumumba which offers a socio-political narrative that’s ever relevant in the modern geopolitical relations, invariably influenced by the colonial and Cold War eras.

The details surrounding Patrice Lumumba’s assassination perhaps overshadows the leader’s life and legacy. On January 17, 1961, Congo’s first Prime Minister and independent leader Lumumba was shot dead, his body hacked to pieces and put into big bottles of acid (Ludo de Witte’s 2001 book indicts people of different nationalities who were behind the gruesome murder of Lumumba). Raoul Peck’s biopic opens with this image of Lumumba’s matryrdom, getting out the shocking facts ourtight so as to draws us into the subversive individual’s life.

The uninitiated viewers might wonder what he did to deserve such a horrific fate. The answer, of course, is easy to figure out: he questioned the enduring power of Western countries and its neo-colonial ways of subjugating African nations through the bait of ‘independence’. Even though, Peck’s treatment of Lumumba doesn’t clearly articulate the challenges the pan-African leader faced within and outside Congo, his commentary is easily understandable, i.e., freedom should be taken not begged (however big the cost is). 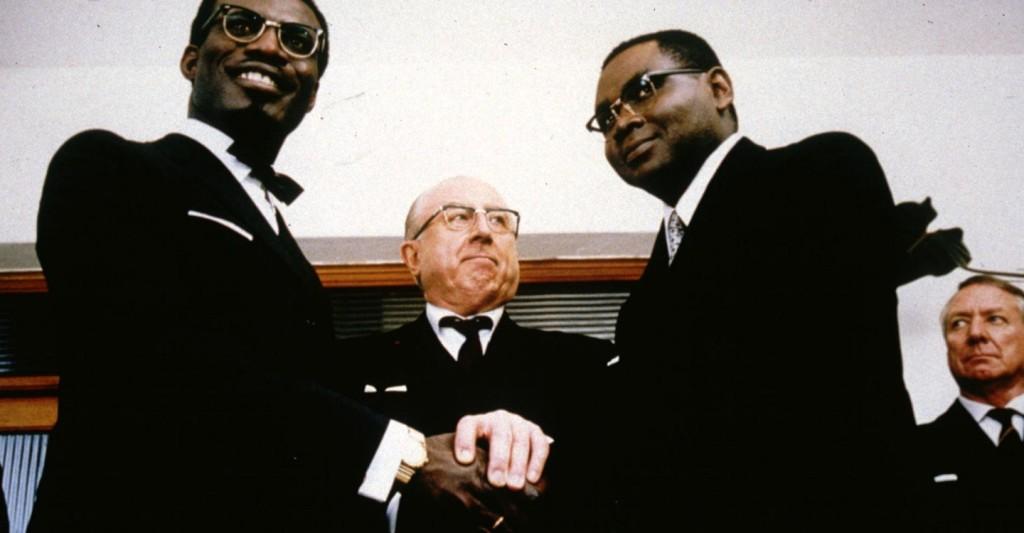 The biopic moves at a breakneck speed without offering much about Congo’s colonial rule or Patrice Lumumba’s early years. Peck narrates the events as if we have prior knowledge of Congo’s pre and post-colonial history and the important players involved in it. However, Eriq Ebouaney’s intensely mesmerizing portrayal of the titular character keeps us engaged. Hence the abbreviated time-lines and baffling narrative gaps doesn’t become a bigger flaw. The pace also suits the narrative in a way, since the political skullduggery and military insurgency witnessed here is echoed throughout modern political history as European nations and US continue to play the ‘I’m-your-savior’ game.

Related to Lumumba: Sometimes In April [2005] — A Hard-Hitting Docu-Drama

Belgium’s King Leopold II took control of Congo in the 1880s, deeming it his private property. In 1908, however, Congo became a Belgian colony. The late 1950s saw the rise of African independence movements (an All-African Peoples’ Conference was held in Ghana in 1958), which brought deadly protests to Congo. Patrice Lumumba who led the Democratic Republic of Congo stood his ground against the Belgian colonizers which got him arrested and tortured. The brutish King Badouin of Belgium eventually declared Congo an independent nation on June 1960. But the colonizers kept on triggering the political and social divide, hoping to lay claim to the nation without the ‘colony’ label.

From the time Mr. Lumumba – in his courageous speech as first Congo PM – indicted the colonial forces that imposed slavery by force, the Western powers have treated him as a potential Soviet ally even though he didn’t openly embrace communism or the Soviet aid. Moreover, in order to not impede the US ‘business’ interests, CIA recruited military general Joseph Mobutu (Alex Descas) for the dictator job (US government did everything to not lose the rich Uranium mine in Congo to its Cold War rival). After swiftly disposing Lumumba, the autocrat Mobutu (also known as one of the most corrupt African politicians) went on to rule Congo until 1997 (in 1997, he was exiled by rebel forces and died in exile from prostrate cancer).

The film’s devastating opening segment unfolds with a gripping voiceover (based on Lumumba’s final letters addressed to his wife Pauline). Brutally beaten, shot to death, hacked, and then burned, the horrific fate of Patrice Lumumba perhaps underlines the devastating trajectory of a nation, subjected to colonial role which is subsequently followed up with more than three decades of dictatorship (all for controlling the nation’s mineral riches). Tagged as a dangerous intellectual, the narrative quickly establishes Lumumba’s journey from being salesman of Polar beer to a prominent member of Congolese National Movement.

The alleged subversive behavior landed him in jail for six months. Later, he traveled to a conference in Brussels, where Belgian leaders drafted the ‘conditions’ for Congo’s liberation. The nation’s first elected President Joseph Kasavubu (Maka Kotto, who went on to become the first African MP to be elected to the Canadian House of Commons) was mostly compliant to the former colonizers. But Prime Minister Lumumba just don’t want to turn the other cheek and forget the long tradition of humiliation, slavery and exploitation. While writer/director Peck lauds Lumumba’s stubborn stance to free African identity from the consciousness of colonization (brilliantly delivered through his great oratorial skills), he also highlights how the stubbornness, in relation to diplomacy and political strategies, eventually trapped him.

Lumumba’s bief tenure (two months) in PM office was punctuated with bloody conflicts involving several factions, including the Belgian military officials and CIA who wanted to influence the corridors of power in order to protect their vested interests. Peck doesn’t always coherently explore these problems, yet his crisp imagery captures Lumumba’s emotional struggle. The director especially uses silence to greater effect. For instance, the shots detailing Lumumba’s execution and disposal unfold in an atmosphere of unsettling silence. Furthermore, in one excellent use of montage, Peck juxtaposes Mobutu’s speech at independence anniversary and his request for one-minute silence in honor of Lumumba with the shot of Lumumba’s bloody visage before the execution. The bitter irony expressed in that sequence possesses the power to haunt our minds.

Despite the heavy note of sadness and silence in Peck’s re-enactment of the brutal murder, it also suggests the need to confront the past, however difficult it is. Be it a nation or an individual, without understanding or facing up the past there’s no moving forward (or to quote Faulkner, “the past is never dead. It’s not even past”).  Most importantly, Peck’s evocation of the brutal past doesn’t offer easy answers or promises catharsis.

Lumumba (115 minutes) is an absorbing summation of the undeservedly vilified independent political leader of Congo. The man’s life and death showcases the social and human damage caused by double-dealing neocolonialist powers.

Joker Leads with 11 Nominations at the Oscar 2020: Full List