Home»Reviews»Shubh Mangal Zyada Saavdhaan [2020] Review: A Loud & Headache Inducing Piece That Must Be Cautioned Against
Reviews

It had been a while since I watched a Hindi comedy film. I decided to go for an evening show of probably one of the films I wouldn’t generally go for, considering my consumption of cinema. Shubh Mangal Zyada Saavdhaan lured me into the theatre because it boasted to deal with homosexual love – something that should be much more normal and regular than it unfortunately is. My experience turned out to be shamelessly unrewarding and harsh. I will try not to let the same harshness flow into my analysis but the critical dissection will be precise as the film is an abomination in all crafts that come under the umbrella of filmmaking.

The introductory sequence of the film that opens into a montage aims to establish the atmosphere it will be existing within. In the same attempt, it mixes a number of musical scores and attaches them to the narrative. This is quite normal of an instrument but abnormality finds its way when the scores do not leave the visuals. They constantly accompany every single line of dialogue spoken throughout the film as if you’re receiving a stage comic act with a band of instrumentalists playing tunes to elevate your otherwise tasteless experience. But when your script is humorless inherently, any musical tune, targeted to manipulate the audience into laughing, is rendered ineffective.

The fundamental of a slapstick comedy script that exploits chaos theory to generate humor lies in spontaneity. This spontaneity must exist to create an organic screenplay. Every consecutive event must attach itself with the preceding one, ticking all boxes of plausibility when seen together, however implausible it may appear in isolation. And subplots that run parallel to the central plot must support the latter. But this film chooses to submit to inaccuracies, idiocy, and lack of direction. Disjoint episodes are created to hold the audience, feed them a lecture and force them into laughter. The degree of contrivance is so high that the film forgets the definition of coherence. Following is available how it happens, with the due share of spoilers:

1. A pair of boys help a girl, Bhumi Pednekar, run from her home in New Delhi from her balcony when she doesn’t even require them for anything. In all the million ways to run, it is this idiotic sequence chosen to show the same. But the cherry of the cake is, this girl is not seen in the film again and so is absent any supposed relevance of the film. 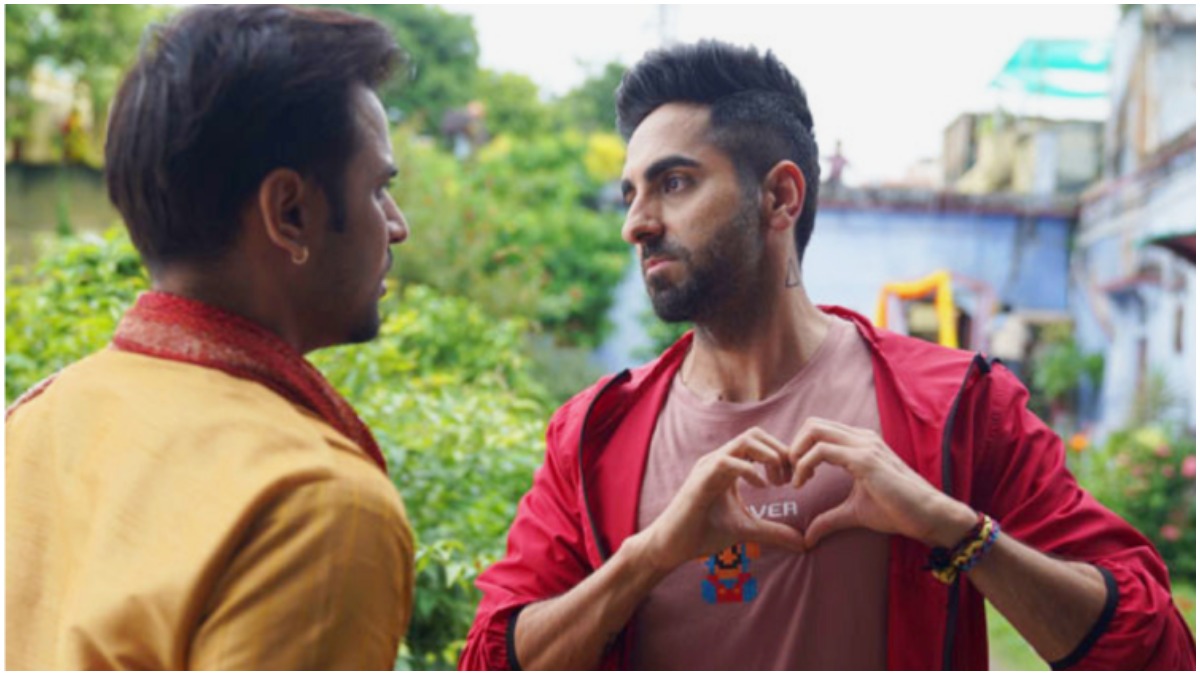 2. The character of the father, the present one, is chosen to be a scientist, possibly in an effort to impart the idea that education and social wisdom exist separately and being a man of science doesn’t make one a liberal by default. But the cause is defeated when the scientist fails to predict and absolve the inefficiency of his invention which is to be used as a shallow metaphor of nature’s triumph over science later in the film. The sole reason behind the mention of this fact is to highlight the redundant political environment the film chooses for itself. One in which protestors are mocked by a character who wants to enjoy the sight of a lathi charge like a show and the one that will cause a curfew for no apparent significance to the plot.

3. Public display of affection is a rarity in our socio-cultural environment. But even if you find it possible, it is still not plausible for a gay couple to kiss each other in a marriage ceremony in some rural town amidst the gathering of hundreds of people continuously without abruption from external elements and without a sense of reality. The world is tough for the entire strata of the population who struggle to express the basics of emotions. Do not mock them for the sake of shallow humor.

5. The police enter, taking an initiative on their own, to arrest our protagonist couple mouthing the dialogue “hum inko arrest karne aaye hain kyunki ye dono gay hain aur gay hona jurm hai” (we are here to arrest them because they are gay and being gay is a criminal offence). I totally understand the sentimentality behind it but Article 377, when it was in effect, criminalized any sexual activity that they defined as “unnatural”, primarily bestiality and anal sex. I don’t even need to point out this inaccuracy and stupidity. I am totally aware of the state’s exploitation and the torture that homosexuals face from the machinery. But this sequence isn’t treading upon their struggles. The entire film chooses consciously to not delve into the emotional and social struggle. It just employs its characters to impart lectures like “homophobia ka koi ilaaj nahi” (there’s no cure of homophobia). This utter insult to those at the vulnerable end, constantly working to normalize themselves and their identity is disgusting. People cannot be made to learn by continuous shouting. Even if you intend to do so, words chosen for the same must have some strength in them. Unfortunately, the dialogue writing of the film is too weak to be considered.

Any film that assumes its audience to be dumb and hence, stoops to the lowest level of mediocrity, is dumb itself. This template is becoming lethal for mainstream Hindi cinema day by day. The current wave of issue-based comedies that is overshadowing the growth of regional and independent cinema is a result of an obsession with a type of money-making process in which manufacturers try to free their conscience of every possible guilt and also achieve a higher ground by faking a voice. They thump their chest of normalizing things by touching taboos.

They tell us that they are bringing important stories in the limelight. This is but an ugly clickbait exercise preying upon our demand for relevance. We are waking each day. We demand a diversion from routine. They use this urge to profit themselves. What happens is that important thing gets diluted. All causes are defeated if you create and inflate hundreds of stereotypes in your effort to normalize or dissolve one. Shubh Mangal Zyada Saavdhan, like its predecessors in the genre, submits to the same.

1. Responsible writing exists. You do not have to be liberal or left. You can be anywhere on the political spectrum and can be a responsible writer. If one of your characters is luscus due to an eye injury in an accidental event, and you choose to follow the revelation with a shock dialogue that says “Conjuring”, intending to create humor from a condition, you are sick. Your mind is perpetuating a stereotypical insensitive behavior and you wrote the scene consciously. If you believe the onus is not on you then stop all your creative pursuits. It has always been the responsibility of artists. We create cultures.

2. If you are talking about a class of people, involve them. Do not assume their behavior and emotions. The difference in perspectives is not only harmful but also, objectively wrong.

3. You don’t have to compromise with information and motives to make something commercial. Your film can be melodramatic, over the top, illogical, and humorous. You can adhere to the demands of your genre. But you must be aware that there are numerous ways to write something. It is your choice. Not a compulsion from society.

Shubh Mangal Zyada Saavdhan is a technical failure as well in all paradigms. Failure is the word.

1. Extreme close-ups and tilted angles dominate the cinematography. It is as if cinematographic language doesn’t exist. There’s a lack of continuity.

2. Actors are caught waiting for moments in which they can utter their dialogues. Every actor is plastic including Neena Gupta. Jitendra is ordinary while Ayushmann doesn’t even deserve to be talked about. Gajraj Rao and Manurishi Chaddha are the least of disappointments for they do good in their acts but are repetitive.

3. The character of Gajraj Rao is shown to be semi bald. I don’t know why it holds any significance at all but okay, for the sake of character design. However, his semi baldness is created with shoddy makeup work. Acting is not a privilege you are rewarded with. It is a profession. An actor must commit to at least the basic requirements of this profession. I can’t say whose idea or reservation it was that they chose to go with makeup and not a shaved head.

3. A pile of cauliflowers is burnt in the end. With poor VFX. How hard is it to burn an actual pile? Were you pollution conscious? If yes, great. I shall take my criticism back.

4. This film scores much less than Ayushmann’s one of previous works Dream Girl (2019) when it comes to direction. The film is a directionless mess. What is it intending to talk about? This is the most recurring question. The director has created sequences that neither contribute to the main narrative nor exist together coherently.

E.g. (a) Ayushmann interrupts a child reciting ‘Jack and Jill’ rhyme at a railway station and replaces it with, “Jack and Johny went up the hill to live in love and laughter, Jack ki leli papa ne aur Johny aaya bhaagkar.” He keeps on repeating these lines as if it’s some sort of awakening. Enjoy.
(b) Ayushmann and Jitendra passionately drown in a kiss out of the blue at a marriage venue. It was not intended to create some statement or for the purpose of coming out. Because what followed was a pile of crass humour mouthed by supporting actors to masquerade their romantic relationship, as they kissed.

I will mention whatever merits that Shubh Mangal Zyada Saavdhan possesses to balance my critique:

1. It may reduce the degree of homophobia that exists in the most common of minds considering it is a mainstream film. Having said that, the lack of seriousness is so dominating and important things are imposed overtly in such a manner that a lot of things are reduced to rejectable lectures with no substance.

2. An episode in the film shot in slow motion which I enjoyed if I consider it in isolation from the rest of the film. It holds ho significance. But it’s entertaining.

3. The film escapes toxicity and homophobia, even though it was treading right on the edge. Contrived sympathy is overpowering but never toxic.

4. The film tries to play safe and inclusive by giving equal weight to the argument of parents.

5. Ayushmann doesn’t claim a screen time that is usually bought by “Heroes”. All characters come out to be of equal importance in the narrative.

Apparently, abnormal has been so normal that I am mentioning basic things as merits.
Thanks for reading!

Pokemon: Mewtwo Strikes Back - Evolution [2020] Netflix Review: Pales in comparison to the original