Clayton Jacobson’s Aussie thriller Brothers’ Nest (2018) has got a dubious plot of sorts: a pair of miserable brothers plots a murder to acquire family inheritance. Moreover, the acting in the early portions feels amateurish and unconvincing (the film was shot in sequence). Nevertheless, we slowly get involved with brothers’ predicament as the narrative presciently delivers insights about the characters. The low points are eradicated as the film’s terrific second-half begins to explore some ‘family shit’ with taciturn grimness of Coen Brothers’ flicks. What particularly works in favor of Brothers’ Nest is the middle-of-nowhere house the whole narrative is set in (to repeat the cliched telling: the setting becomes a vital character), and the taut low-budget film-making with no frills or flab (a number of Australian cinema chains were involved in the funding).

The Jacobson brothers’ – Clayton and Shane – previous collaborative feature-film is 12 years old, titled ‘Kenny’ (2006). It was a remarkable lowbrow mockumentary that follows the life of a plumber (Shane Jacobson) at a portable toilet rental firm. Brothers’ Nest, the brothers’ second feature film, is the exact opposite of Kenny, in terms of tone and plot. Gone is the genial worldview of the working-class hero and replaced with two bumbling, bankrupted workers waddling in the muck of societal instability to ensure their existence at any cost. Brothers’ Nest was written by Clayton’s friend/screenwriter Jamie Browne (‘The Mule’) and Chris Pahlow, the characters basically fashioned for Shane and Clayton. Director Clayton in interviews had divulged that the plot originated when Jamie, the urban dweller, had stayed in Clayton’s home at rural Victoria. The fears Jamie had about the house and the atmosphere was said to have find its way into this bloody tale of sibling rivalry. 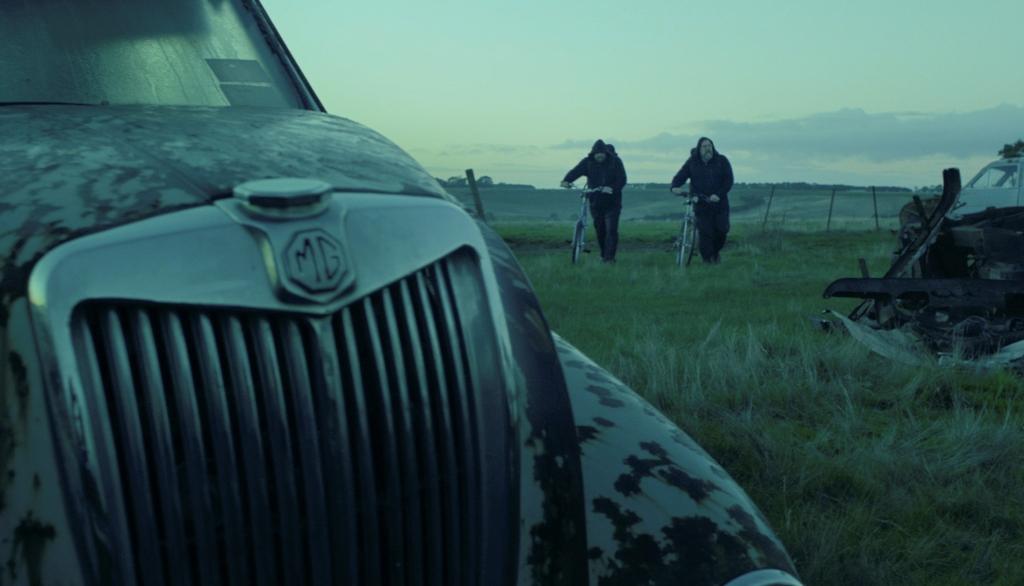 The film opens on a cold early morning with two guys, cloaked entirely in black, ride a bicycle through the picturesque countryside Victoria. The two plump, middle-aged men happen to be brothers – Jeffrey (Clayton Jacobson) and Terry (Shane Jacobson). The brothers enter a deserted home in the attire of forensic officers. We soon find out that this is their family home, where their father had committed suicide, following which their mother (Lynette Curan) married a caring, level-headed man named Rodger (Kim Gyngell). Now the mother is suffering from cancer, and in the will, she has given the family home to the brothers’ step-father Rodger. Jeff and Tez have arrived there to commit a hardhearted deed in order to ensure that the family home stays with them. Jeff is a meticulous guy who carries a murder ‘checklist’, listing the basic things that need to be done to frame the murder as a suicide and give themselves an airtight alibi.

Tez is the exact opposite of overbearing, dominant Jeff. He is the emotional type and is clearly torn over about going forward with the sinister plan. Jeff turns the vile act they are about to commit into a symbol of familial devotion; getting back what ‘rightfully’ belongs to a father and his sons. But Tez inherently feels the selfish, avaricious dimension behind Jeff’s idea. Both the brothers are estranged from their wife and children, under-employed, and pressured by innumerable financial troubles. Not only in terms of temperament, Jeff and Tez wildly differ even when it comes to the individual perception of their father. Jeff considers the man a hero and still feels it a betrayal when her mother chooses to re-marry. Tez (only seven when his father committed suicide) thinks less of him in glowing terms. Things turn unnerving and indelibly dark as old, exhausted Rodger enters his house. Of course, it is one thing to ingeniously plot a murder, but when it comes to doing the dirty act everything goes absurdly wrong.

Director Clayton initially employs pitch-black comedy to highlight the idiocy of the situation and the characters. The comedy mostly remains as an undercurrent to gradually immerse us into the increasingly bleak flow of things. The writing brilliantly tackles the unraveling of tenuous fraternal bond and despite the thin story-line, it keeps us guessing till the end. Although Jeff and Tez are set to commit a ruthless act, relatable emotional stakes could be found in this slow erosion of thinly genial relations. Furthermore, Terry’s connection with family horse Freddie adds more depth to the narrative’s emotional surface (the characters’ arc too never feels forced, especially Terry’s obstinate stance in the final portions). For a thriller genre feature, Brothers’ Nest doesn’t stray much from the expectations. Nevertheless, there’s enough emotional clarity here to deliver a potent commentary on tainted, idealized patriarchy. This particular theme gets a superb touch in the ending. All over the day, the brothers talk of a horse guy coming to get their Freddie. But this alleged horse guy eventually turns out to be a woman (Sarah Snook in a wonderful cameo), who wants to buy Freddie as a gift for her daughter.

Cinematographer Peter Falk and director Clayton mesmerizingly lays out the geography of the rundown farmhouse, teleporting us into this unique atmosphere covered in a miasma of unsatiated manhood. The color palette that incorporates subdued browns and greys — the only contrast being orange jumpsuits worn by Jeff and Tez– helps the narrative to elevate it into a heavier sort of tragedy. Though Shane and Clayton’s performances seem contrived at times, the chemistry shared by the real brothers and their matching physicality easily allow viewers to process them as men sharing a similar background. Comedian Gyngell plays the step-father character in an understated and emotionally affecting manner.

Brothers’ Nest (97 minutes) is an unmistakably raw, Australian tragicomic thriller that’s deservedly compared to the mood of Coen Brothers’ works. It realizes the familiar expression ‘sometimes you hurt the ones who love you most’ through a heightened, grimly imaginative scenario.