Director Grisebach’s keen observation of men-at-work instantly reminded me of Claire Denis’ mesmeric mediation on masculinity in Beau Travail (1999). Although the story-line and the setting are entirely different, Valeska Grisebach and Claire Denis’ basic thesis centers on the idea of masculinity that has lost its function due to certain external factors: war in ‘Beau Travail’ and economic imperialism in ‘Western’.

German film-maker Valeska Grisebach’s long-overdue third feature Western (2018) has got poker-faced men, horses, guns, and magnificent outdoor scenery as in the genre the movie’s title denotes. But it’s neither set in 19th century America nor ticks off the essential genre ingredients with a renewed sense of excitement. Stripped off typical western archetypes and iconography, Grisebach’s slow-burn mood-piece rather employs a simple conflict and an aloof lone-wolf protagonist to explore the cultural and economic realities of all-too-modern yet fractured Europe.  The film is set in a sleepy Bulgarian small-town, where a crew of German contract workers toils on building the foundations of a hydroelectric power plant. Misunderstanding, deep-seated animosity, and other barriers bring upon simmering tension between the locals and the interlopers. The central character is a middle-aged German contract worker named Meinhard (Meinhard Neumann), a self-confessed pacifist who is caught in the complex dynamics of this conflict.

Director Grisebach’s keen observation of men-at-work instantly reminded me of Claire Denis’ mesmeric mediation on masculinity in Beau Travail (1999). Although the story-line and the setting are entirely different, Valeska Grisebach and Claire Denis’ basic thesis centers on the idea of masculinity that has lost its function due to certain external factors: war in ‘Beau Travail’ and economic imperialism in ‘Western’. Grisebach also practices bit of neo-realism by casting non-professionals – drawn largely from working class by staying true to the characters – to accomplish the perfect verisimilitude, necessary for vividly resonating its thematic insights (Chloe Zhao’s serene examination of masculinity – The Rider — and Alice Rohrwacher’s subtle social drama – Happy as Lazzaro – were other recent films by women film-makers to have mastered the art of utilizing non-actors). 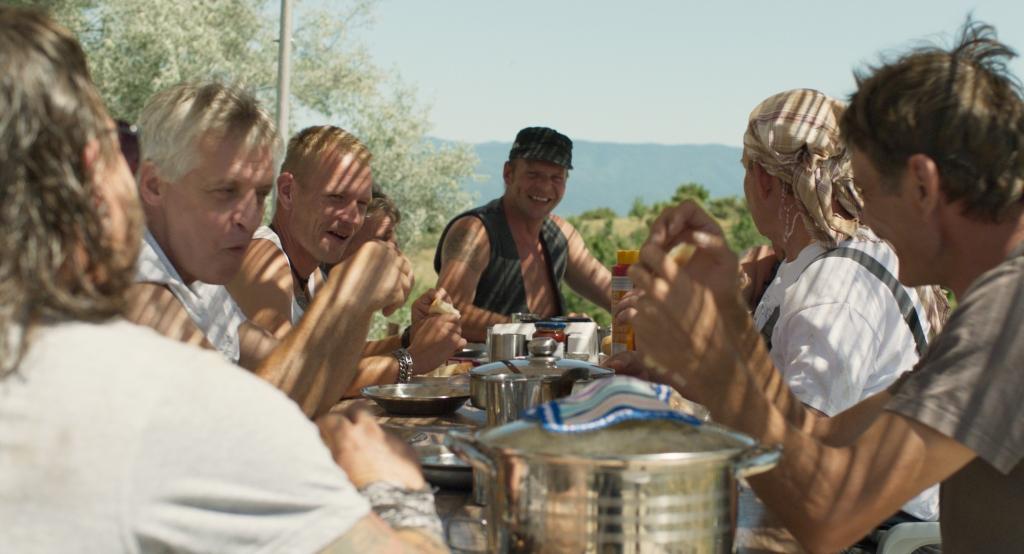 Western’s opening segments set up the codes and rituals of masculinity set amongst its all-male migrant workers. After having erected their camp at the forested outskirts of a Bulgarian town, the foreman Vincent (Reinhardt Wetrek) hoists a German flag to make his crew members feel at home. Vincent is inquired by one of the crew, “Haven’t you considered the locals?” to which he gruffly replies, “We do nothing else, we’re building them a water power plant.” In one of their brief sojourns to the town, the Germans remark how the place looks as if they have traveled back in time. And as if proving this casual observation, the locals still talk of the bad blood caused by Nazi intrusion. The hulking and bellicose Vincent with no sensitivity whatsoever quips, “We’re back…only took 70 years”. In many ways, Meinhard is the opposite of Vincent. The taciturn yet polite Meinhard doesn’t seek cheap distractions at their temporary base. Early in the narrative, while the gang relaxes by a river, a group of women appear on the opposite bank. The bare-chested Vincent’s efforts to flirt with a young local woman (Vyara Borisova) go stupidly wrong and turn into unfair taunting.

On the other hand, Meinhard handles the locals’ initial antipathy very well and then goes out of his way to befriend a charming wise guy named Adrian (Syuleyman Alilov Letifov). He bonds with Adrian by taming his wild white horse and later uses the horse (riding it bareback) to make furtive trips between his camp and village. The conflict between unprincipled Germans and boorish locals start with German flag getting lost and mildly escalated by Vincent’s teasing of the young woman by the river. Meinhard is largely a rootless sad-sack whose new-found friendship with Bulgarians tends to fill the hole in his heart. When conflict rises between Germans and the locals over the town’s rationed water supply, it is clear whose Meinhard would lean on. But Griesbach never overly dramatizes the dispute so as to reach a point of physical violence. The focus relies on how Meinhard’s yearning for familial closeness and rapport makes him romanticize one life over the other. In fact, the outsiders’ longing for acceptance doesn’t end with hugs and kisses, but only with a man dancing alone to shake-off his fanciful dreams. 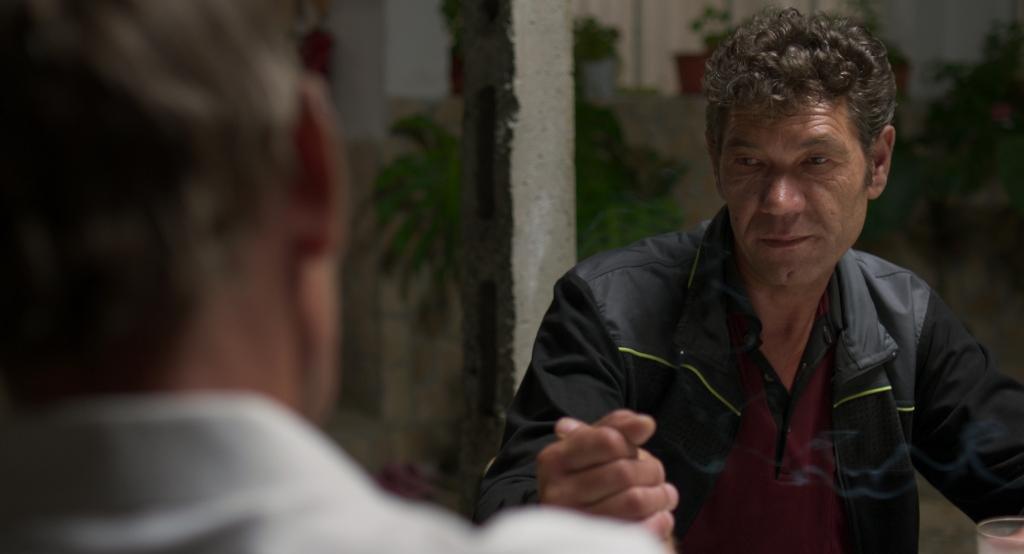 Grisebach’s world interestingly lacks the ‘us vs them’ narrative that’s typical to western genre works. From a narrative and thematic perspective, Grisebach withholds a naturalistic ambivalent attitude. The director’s treatment of Bulgarians’ feelings over Meinhard’s presence in their community and her position on the modern capitalistic machinations remains intriguingly mixed throughout. In Western, the cultural and language barriers are interestingly blurred. The rapport Meinhard develops with the locals rely more on pensive nods, meaningful gestures, and piercing looks. In one brilliant scene, Meinhard and Adrian start to understand each other even though one can’t possibly know what the other is saying. They just exchange empathetic looks and evocative smiles to eventually bond over (Meinhard also forges friendship with a middle-aged woman and even learns how to string tobacco leaves for drying). Grisebach is bullish when it comes to establishing how connections are made between disparate individuals, irrespective of the cultural and social barriers. At the same time, Grisebach sees mistrustfulness, tribalism, and animosity inherent to humankind as the obstacles creating breakdown in communication.

Grisebach and DP Bernhard Keller’s deliberately unadorned aesthetics that shuns visual romanticism delivers potent observations on male behavior. Grisebach mostly stages the action in medium-to-long shots, except for the odd close-up shots that hints at interpersonal bonds, formed less through words. Despite the no-frills, shallow focus cinematography, Western gains a lot from its relaxed narrative flow and improvised interplay. The grizzled and stoic Meinhard Neumann’s looming presence is definitely a drawing factor (in terms of a western hero, he is more Randolph Scott than John Wayne or Clint Eastwood). Moreover, thanks to Grisebach’s creative choices we find subtle, unspoken grace notes in each of the performances. Overall, Western (120 minutes) promises juicy emotional punches and insightful commentaries  — on self-identity & machismo — beneath its dry, unembellished packaging.