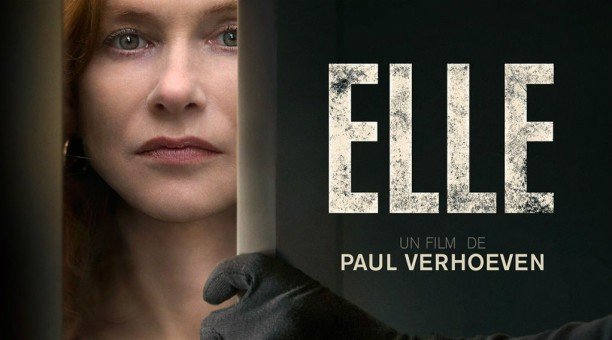 Shame is an emotion not strong enough to keep us from doing what we are not supposed to.

Seventy seven year old Paul Verhoeven’s career is filled with movies that centers on his characters’ psycho-sexual crisis. “Turkish Delight” (1973), “Soldier of Orange” (1977), “Spetters” (1980), and “The Fourth Man” (1983) are drenched with twisted narratives and jet-black comedy. Perverse violence, atmosphere of paranoia, and Catholic guilt are the recurring thematic strands in his oeuvre. The in-your-face approach to violence against women in Verhoeven’s films has brought many controversies. On the graphic portrayal of sex and violence in his films, Verhoeven comments: “Sex in general is one of the most important things in the world, isn’t it? And violence is the other. Sex in general is supposed to be creative and violence is destructive. But sometimes violence is necessary and sometimes sex can also turn into violence” (in an interview to ‘Independent’). Verhoeven’s films are all designed like a journey into the hell. At times, he escalates the provocative nature of his narrative to a greater point, failing to attain any profundity. In “Elle”, Verhoeven is much more nuanced. Despite all the odd happenings in the film, he imbues a fine layer of ambiguity to his central character. “Elle” gives enough space to incorporate all of the director’s aforementioned pet themes without losing its way. The film was revoltingly called as ‘rape comedy’ and ‘extremely erotic’ even though it doesn’t treat sexual assault as an entertainment or portrays it in an erotic manner.

“Elle” opens in blackness and all we hear is crashing sounds and a woman’s screams. After a brief close-up shot of a black cat, we see Michele LeBlanc (Isabelle Huppert) lying on the floor and a masked intruder who has raped her slowly walks out the door. She lies on the floor, in broad daylight, for a distressing moment, then corrects her dress, puts the broken wares into a bin, takes a long hot bath, and orders some sushi. Her clumsy young son Vincent (Jonas Bloquet) pays a visit. When he asks about the injury near her eyes, Michele lies (says she fell from the bike). We wonder at why she didn’t report the crime to police and most importantly we are disturbed by her coldness. She is evidently traumatized as gripped in fear, she goes to buy pepper spray and a miniature axe. But, not reporting the crime or casually telling to her friends at dinner “I suppose I was raped”, wasn’t the only oddity associated with Michele. Michele is a successful, 49 year old CEO of an erotic video-game company. She runs the company with her best friend Anna (Anne Consigny). The best game her company has produced involves players taking the role of giant orc rapist, penetrating a beautiful woman with its tentacles. 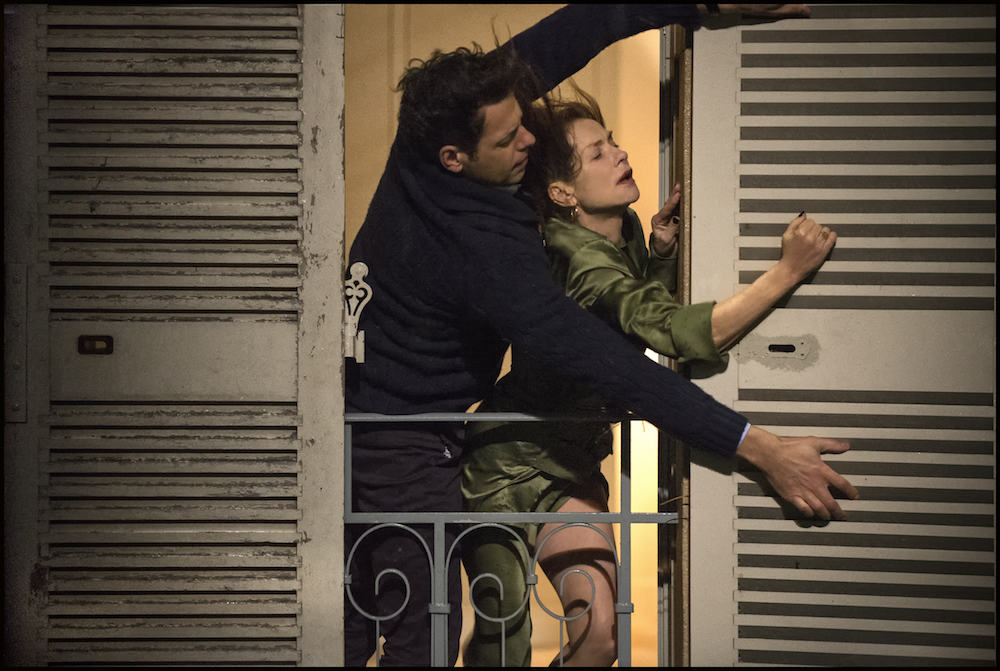 The film’s narrative moves forward with a set of interactions, which defines who she is or why is she like that. It’s pretty much like a spider weaving a web, but neither Michele nor the people in her life take the role of spider-insect or victimizer-victim. Michele is friendlier, cruel, and remains difficult with cornucopia of individuals she comes across. When she gets menacing messages from the masked attacker, we judge the men she confronts in workplace and in personal life. But, “Elle” isn’t just about unmasking the rapist; it’s not a whodunit mystery. The identity of the rapist is, of course, revealed but Verhoeven reverses expectations to jump deep into the character’s moral ambiguity. And “Elle” isn’t provocative just for the sake of it. There’s an intricate logic behind Michele’s actions and reactions, however odd it may seem. The better way to watch the film is to not read its detailed plot structure. It would be a different cinematic experience for viewers discovering the characters through each of the well-staged interactions rather than just read about them in a review. “They sat down in the dark and received a slap in the face” says Guardian’s chief critic Peter Bradshaw on his review of “Elle”. Just remember to brace yourselves for that tight slap.

If “Elle” was produced by a Hollywood Studio, the attention would have been on the mystery. So, this film is kind of opposite to the plot nature of “Basic Instinct” (although story-line & themes are different). As in traditional European fictions, the focus is on the social environment of Michele LeBlanc. She wants to find out who sexually assaulted her. She has fantasizes about beating the guy to death. But, for a larger part the mystery or revenge fantasy element is kept out of focus. Michele attends to her family problems, satisfies her vampish desires, etc. However, the memory of rape is like the ‘elephant in the room’. She expertly ignores or tries to ignore the memory, but time and again it draws her attention. And it is this memory that opens the figurative ‘tin of worms’ to push her into more eccentric behavior. The button pushing, dehumanizing acts of sexual violence could be seen in a different perspective and arrive at harsh conclusions. There’s the typical Verhoeven trademark, where characters break free from their social restraints through manipulated ways of violence and sadism. Nevertheless, “Elle” comes across as a specific experience of a damaged individual. Michele doesn’t want to be pushed to a corner as a victim (a tag the society has tried to place on her from the childhood). She hates to succumb to her fears and this particular thought process takes us through her abhorrent, unusually odd behavior (it’s all about taking control). There are times the narrative feels a little stretched and there’s something unsatisfying about the predictable ending, although it’s utterly absorbing for most part. 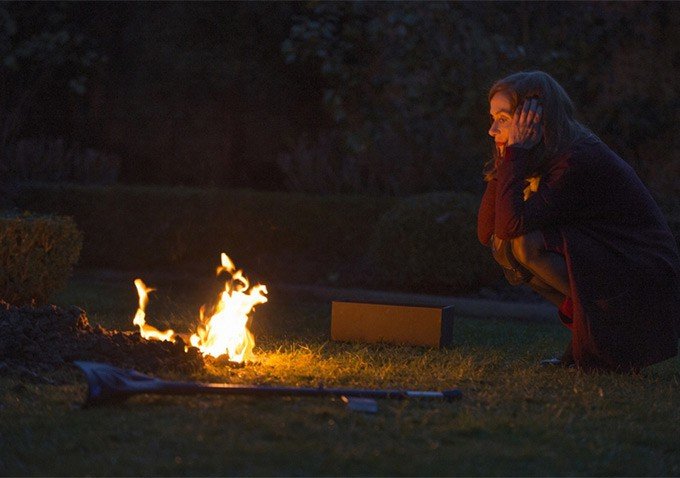 David Birke’s script perfectly sketches the characters with an eye for impish details. The Christmas dinner sequence was wonderfully written and devilishly visualized. The viewers’ sense of morality and expectations of justice are teased in that scene (and not overdone). Director Verhoeven must be commended for the way he pushes the narrative through its persistently changing tone. It moves from a horror to farce to psychological study without making erratic turns to lose our interest. Eventually, if you think that Verhoeven (& David Birke) had efficiently walked down that tightrope without ever fumbling, then part of the reason lies in the stupendous performance of Isabelle Huppert. Her cold stare, faintest of smiles, sudden pauses, and confrontational reactions are all so engrossing to behold. The way she emotes with a casual precision is what saves “Elle” from entering the territory of insincere melodrama. Huppert makes us worry about her detached behavior. In one scene, during the business meeting, she asks the video-game maker to escalate the orgasmic convulsions of the animated female character when the monster penetrates with its tentacles. She utters it so casually and we can’t tell whether she is thinking about the parallels to her own attack upon making that statement. Throughout the film, Huppert perfectly channels that note of ambiguity and unpredictability. And, within her character’s resolute nature, we are also able to look at fear and paranoia that bursts through the seams. The refusal to surrender to fear was brilliantly portrayed by the actress, which naturally gains our empathy.

Paul Verhoeven’s “Elle” (130 minutes) is provocative enough without even making a beautiful actress uncross her legs. Of course, provocation isn’t the only thing the veteran director is after as he weaves an intricate, finely balanced character study. Isabelle Huppert’s unflinching performance alone makes the film worth watching.

My Weekend at MAMI by Suruchi Bhavsar