Home»Explainers»Athena (2022): Movie Review & Ending, Explained – What is the fate of the three brothers?
Explainers/Netflix/OTT/Reviews

Directed by Romain Gavras, Athena (2022) is a French-language film, now streaming on Netflix. This politically charged action thriller was screened at this year’s Venice Film Festival, where it went on to win two major awards. The plot of this film follows the journey of three brothers following the death of their younger brother due to extremely unfortunate circumstances. Their ways to work on their feelings about this loss and their future lives ultimately lead them into chaos and the film conveys the whirlwind of their emotions with utmost truth and honesty. The cast of this stunning film includes Dali Benssalah, Sami Slimane, Ouassini Embarek, and Anthony Bajon in prominent roles.

Idil, a young boy from Paris, gets brutally killed by two people dressed as policemen. A video showcasing this tragic death starts doing rounds throughout the city and creates major unrest in the public and especially youths. It angers them to the point they decide to take their anger to the streets and turn the entire city into a battlefield. A few hours after Idil’s death, Abdel (Dali Benssalah) speaks about the loss in front of a room full of spectators. He was a French soldier who just returned from Mali and has complete faith that the authorities will bring justice. Idil is his youngest brother, and it pains him to find out about such a gruesome end to his life.

The other brother – Karim (Sami Slimane) watches his rousing speech while standing amongst the crowd, enraged. His anger simmers when the people on the stage speak about his family and their valuable contribution to the country. Unlike Abdel who believes that the system will have a just solution for his brother’s murder, Karim is a rebel. The agony of seeing his loved one getting killed by the ones they are supposed to put their faith in turns him into a soldier of vengeance. During this speech, he throws Molotov cocktails in the middle unsuspecting crowd and puts all of them in a state of bewilderment and fear.

While he didn’t even get time to weep at his brother’s sudden demise, Karim leads an army full of angry youth who engage in acts of terror. They walk around sloganeering ‘Athena’ – the name of a place inhabited by immigrants. When he sees them engaged in hooliganism for the sake of shallow showcase, he talks sense into them by mentioning the reason for this – to get hold of the culprits behind Idil’s devastating murder. Meanwhile, Abdel tries to help out the civilians, especially the older people to escape the terrifying chaos that envelopes the city. Even when his family member tries to persuade him against the system and mentions the war that has already fumed a significant majority, he keeps faith in the authority and feels sorry that his brother is the cause of the unrest. 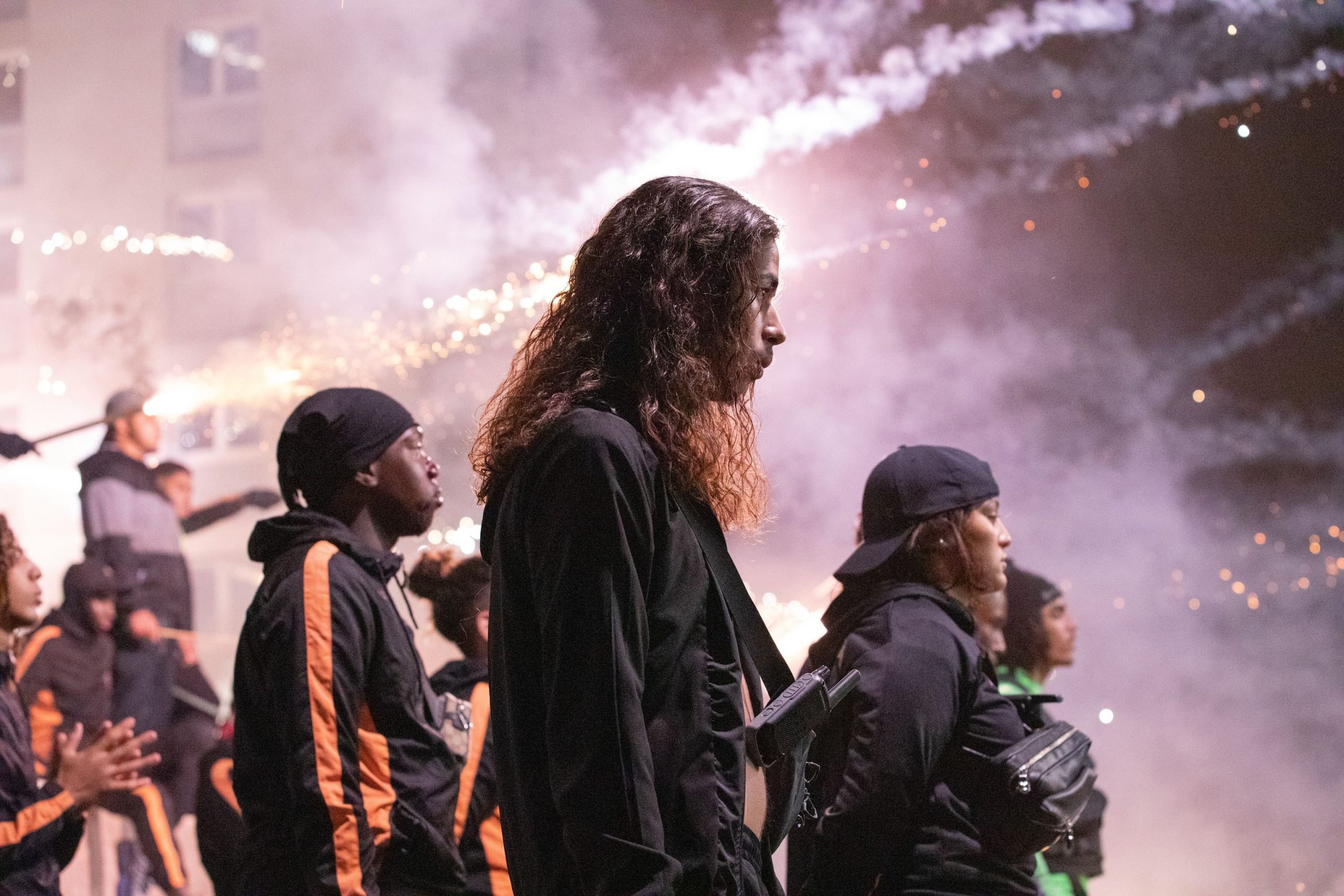 The third brother – Moktar (Ouassini Embarek), is frustrated with the anger & resentment being showcased by the young generation since his business got under threat due to the crumbling foundations of the city. He is looking for a way out to save his business from going under. While showcasing the personal journeys of these three brothers, Athena also follows Jérôme that represents the other side of the chaos. Jérôme is a police officer and follows his herd as part of the process and seems shaken by the excessive anger shown towards their department.

From stone pelting to startling fires, the young rebels showcase their resentment in a violently direct manner, and it terrifies him. In his attempts to stop the rebel activities, he gets captured by Karim and the young rebels. Meanwhile, in his pursuit to help the needy, Abdel gets captured by the authorities. A police officer visits him and apologizes for considering him a threat – owing to his publicized views about his faith in the governance. The ulterior motive for them to save him is to save Jérôme (Anthony Bajon) from captivity.

The authorities think that being Karim’s brother, Abdel might be able to persuade him. Abdel infiltrates to convince Karim to let the police officer leave. He tries to talk sense into him and to make him see that Idil’s killing was not the fault of the authorities. Karim refuses to agree with it. We see him showcasing a moment of vulnerability amidst the chaos when he gets emotional listening to a piece of news that stated Idil’s murder as an act by the right-wing extremists to mitigate the tension. After his successful attempt to dissuade Karim from his acts of vengeance, Abdel attempts to sneak Jérôme out. He seeks the help of Moktar, even if they haven’t been on good terms with one another. Moktar thinks it to be a rejoice of brothers against the young rebels, but Karim only comes there to seek help to escape.

When Karim and other young rebels reach the spot, they are hiding in, he tries to threaten Karim with fire if he doesn’t come on his side of the battle. Abdel continues to disagree and tries to talk sense into him. However, in his continuing attempt of causing disharmony, he ends up lighting himself on fire. Seeing another brother in flames, he gets heartbroken. It shakes him to the core, which reflects in his interaction with Moktar right after. Even after witnessing Karim’s death, Moktar keeps up with his self-centered motives. So, he breaks down and takes out his anger on this stepbrother. The scene powerfully conveys the pain he is going through at this stage.

Romain Gavras’s new directorial venture – ‘Athena’ (2022) is easily one of the finest films of the year. It’s a masterclass in filmmaking backed by an intricate screenplay written by Ladj Ly (known for the 2019 film, Les Misérables) and Elias Belkeddar along with the director. You witness distinctly unique perspectives through its characters that represent more than their individual values, beliefs, and characteristics. They let us map out the landscapes from the crumbling city and turn the film into a stimulating exercise. Amidst its tale of the rebel and political motives, we come across an incredibly personal narrative of the breaking of a family. Amidst the stunningly shot takes through its horrifying world, we witness a gut-wrenching tale filled with depth and nuance.

The cinematography by Matias Boucard is beyond astonishing. The praise is not just for the carefully orchestrated long takes or the immaculate framing decisions, but the way it encapsulates the heart of the narrative and places the viewers in the heart of the battlefield. The smoke and fog that the characters witness become intensely real and their walks through these ghost-like streets bring a devastating intensity – reminiscent of the work of Emanuel Lubezki for Children of Men. The personal and the political consistently cross each other in Athena, and the credit to make us feel the immense stakes in front of these characters goes to the breathtaking camerawork. Within moments it smoothly switches from a man horrified by the devastation to the wide scope of the same chaos. 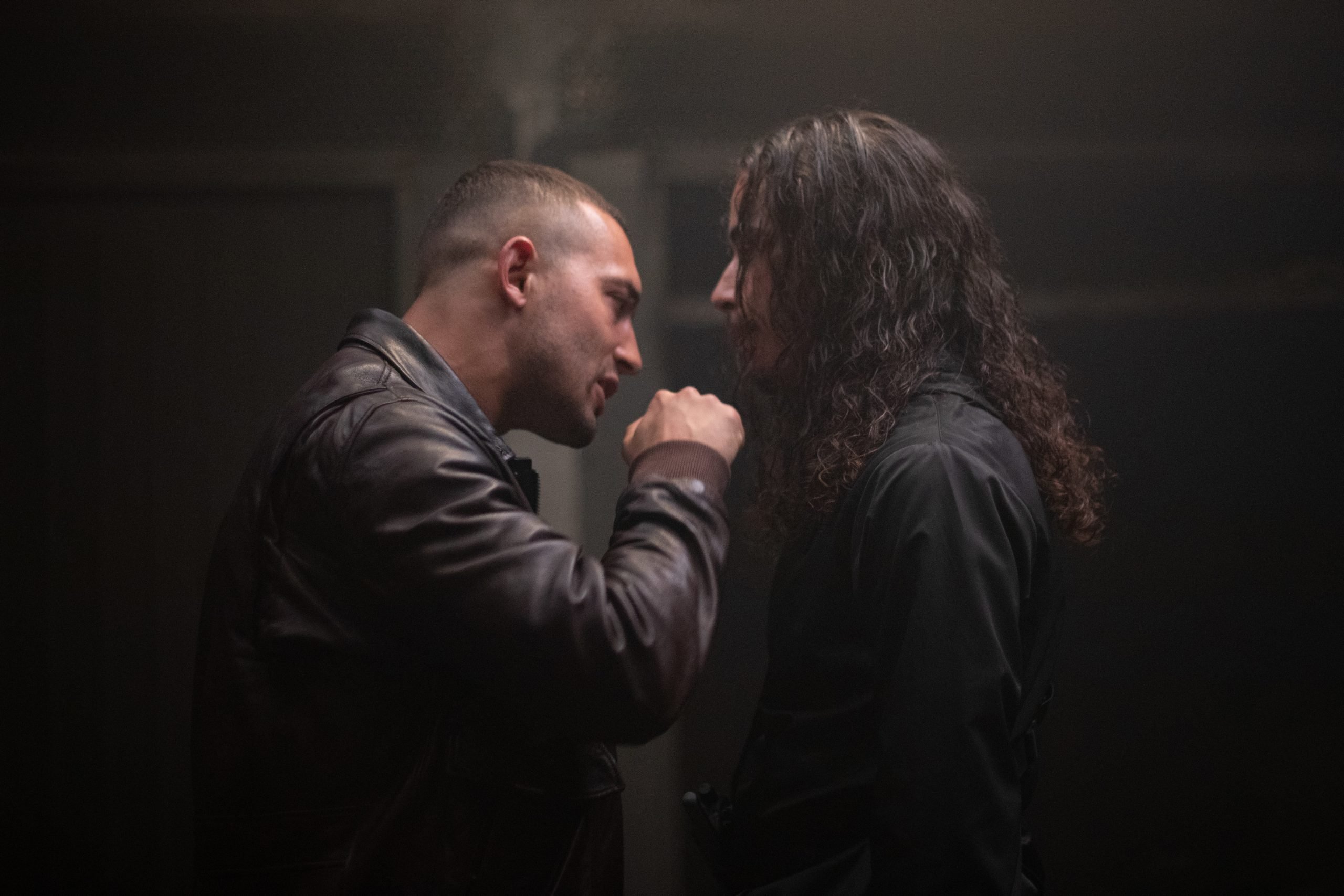 What accompanies the camerawork in making the film, a haunting experience, is the chilling, all-encompassing score by Surkin. The aforementioned scope of the visuals is heightened by the stimulating music in the backdrop. You sense the wideness of widespread desolation due to the notes that rise sky-high while the camera swiftly pulls you from the streets, and from one to the next perspective. A seamless transition achieved by the makers from silence to extreme chaos akin to a battlefield from centuries ago is astounding. It is impossible not to be shaken by the film’s narrative, especially when the style and substance are equally immersive.

What is the fate of the three brothers?

After witnessing the death of two of his brothers within a matter of hours, Abdel gets devastated. It also shakes the foundation of belief he holds in the system that he abides by and finds himself disoriented. He joins the rebel gang that was earlier led by Karim and plans to continue the mission that he had started. He goes to confront Jérôme along with the youth and picks up a call from the police who request him to release Jérôme, to not cause any harm out of impulse.

Abdel decides to take the negotiation to the next stage and threatens the police saying he will kill Jérôme if they don’t declare the names of the two police officers that killed Idil. He gives them the ultimatum of 24 hours after which there will be no turning back. His anger reaches a level where he tells Sebastian (Alexis Manenti) whom he had tried to save from the growing unrest to work on fuelling the anger.

Abdel later receives a call from the police who ask him to cooperate with them and evacuate. When he keeps up with his request to reveal the culprits, they continue to mention the act being a result of right-wing extremists dressed as police officers. Being constantly shut down by the authorities when asked for answers, he goes on to threaten Jérôme to reveal the names, to the point of killing him. At a moment when he gets a sense of his insanity, he steps back. Jérôme manages to escape and gets caught as one of the rebels.

In the end, we see a surreal scene where Abdel is sitting in a room from his apartment – that is in shambles and is listening to the news about the civil war in France. After tracking the devastation of his abode, the camera goes out to map out the entire city. The very next moment, the entire floor of Abdel’s apartment gets burst into flames. After a beat, we see a couple of extremists burning the police emblem. The film ends on a deeply pessimistic note to showcase an absolute lack of faith in the systems that are supposed to protect the citizens. Meanwhile, the unrest is orchestrated by such forces who only wish to create chaos in any way possible.


Where to watch Athena

Section 8 Movie Ending, Explained - Who was behind Jake's family's murder?