There’s a precise formula to a Baz Luhrmann film, maybe except for ‘Strictly Ballroom.’ They’re tragedies resulting from love, told in the form of extravagant melodramas, filmed with a dizzyingly glittery visual style. While the style has in the past worked in favor of idiosyncratically bringing to life classic works of literature, this dedication to it runs the risk of overriding the central subject when it’s a biopic. Especially, when it’s a biopic of a figure as important, influential, and beloved as Elvis Presley. And yet the story of this mega star, shining brighter than any light in Vegas as he incipiently destroys himself out of his love for the stage and his fans, becomes a story tailor-made for Luhrmann to tell.

So along with sticking to his guns as an innate showman, he also becomes a fabulist here. Elvis’s youth is portrayed like that of a superhero. He was conceived when lightning struck, born with the strength of two men, and amid his impoverished childhood, was held up like a prophet by a church congregation as he fainted from the divine inspiration he found in Black Gospel music. When he steps onstage following a Hank Snow performance and starts wiggling around in his iconic style, the shrieks of the randy women in the audience come like screams of liberation. In every possible way, the young Elvis looks destined to transmute into one of the superheroes he reads about in comic books. This larger-than-life persona of the man feeds Luhrmann’s vivacious style, resulting in an invigorating first act. And the film doesn’t really lose this momentum, though, at times, the length of it can be felt as it juggles the entirety of such a grand and eventful life. 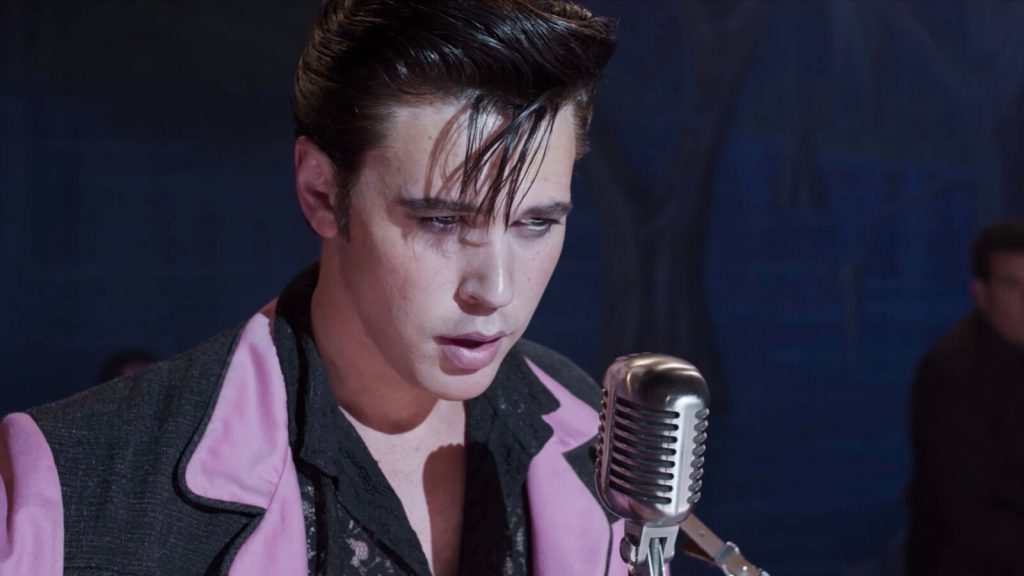 As the somber moments start to roll in, the sobering of the ostentation feels uncharacteristic of Luhrmann. His irreverent style, consciously slowing down, shows his respect for the man and his material. The glitz and glamour are only a setup to magnify the loneliness of the quiet moments. ‘Elvis,’ as much as it is his film through and through, has the rhythm of a Scorsese film about the rise and fall of a colossal figure. In fact, the carnivalesque style of the film is reminiscent of Scorsese’s iteration of ‘Cape Fear’ as split screens, double exposure shots, documentary footage, slow motion, animated text, and a plethora of tricks are used to remind us that we’re viewing this story through the eyes of Elvis’s manager, the fiendishly selfish Tom Parker, who himself used to be a carnival huckster.

The central conflict deals with the perpetual clash between art and money as the scheming financier is constantly an obstacle in the path of the artist’s realization of his world-changing dreams. This relationship that sits at the heart of the film is where ‘Elvis’ renders ‘Moulin Rouge’ a dress rehearsal in preparation for the former. Thankfully, here the antagonist’s role is played by Tom Hanks and is nowhere near as cartoonish as that of the Duke. It isn’t just his artistry but even Elvis’s politics that Tom Parker tries to smother though he is too much of a mortal to succeed at that. Hanks’s performance, though, is a dubious part of the film. He is portrayed as a cartoonishly evil character, something that is stifled by the fatsuit at times, and his own reputation intrudes and neutralizes the disgust we are meant to feel towards this character. At the same time, that very ability of his to play reassuring characters enables the depiction of the manipulative nature of Tom Parker. It is nowhere near an illustration of his talent but is a serviceable performance if sometimes a little unconvincing.

What remains faultlessly brilliant throughout is Austin Butler’s turn as ‘Elvis.’ Luhrmann has always had an uncanny knack for casting young actors who are as beautiful as they’re charismatic, and Butler is an astronomical compound of both. The innateness of Elvis’s talent that makes his persona onstage only a slightly more dramatic version of what he is on a daily basis is maintained with effortless ease by him throughout. How he tries to convince his mother that he’ll return to her oozes the same amount of charm and smoothness that he has when he’s performing in his comeback special. There are moments in the film when wide shots make it look like documentary footage of the real Elvis during his live performances. To top it off, not only Butler’s body language but his voice too is a perfect replication as his singing of ‘Hound Dog’ is basically indistinguishable from Elvis’s. The film even begins with split screens of Elvis’s actual performance at The International Hotel and Butler’s recreation of the same, and all that gives the real one away is the grain from the film that was used to record it back in the day.

Over the last two years, the debate about the need for the existence of movie theatres has exponentially intensified. While films like ‘Dune’ and ‘Top Gun: Maverick’ have convincingly made a case for their need to immerse ourselves in the experience of a film’s world and its action, ‘Elvis’ reminds us of the big screen’s importance in experiencing human stories. The close-ups of Elvis as he waits for the anticipation in his audience’s hearts to heighten aptly before exploding into his gyrations turn his face into astonishing landscapes, humbling us with its grandeur, even if it only is a face. As arguably Luhrmann’s most restrained film and a textbook star making a turn from Butler, ‘Elvis’ is a fantastic example of a biopic of a near-mythical figure that is both a hagiography and a folktale at the same time.