“Those of us who know him knew that he thought one time of becoming a priest, but I really know that his vocation was to become what he is today, the high priest of film,” Robert De Niro concluded his speech saluting Martin Scorsese when the Academy awarded him the AFI Life Achievement Award, and those words couldn’t be truer and more deserved.

Martin Scorsese not only influenced cinema as we know it today with dozens of masterpieces that seemed to blend the beautiful old with the revolutionary new but dedicated his money, efforts and time to film preservation, restoring and saving films that were thought long-dead or on the verge of oblivion; his passion for film is awe-inspiring, to say the least.

Unfortunately, his latest feature film, The Irishman, didn’t win any awards at the Oscars this year, but it was met with a lot of praise and acclaim, so this seems like an opportune time to make a list of my favorite films by him that could serve as an introduction to people wishing to get more familiar with his work and discover the wonders he has been making for five decades now. 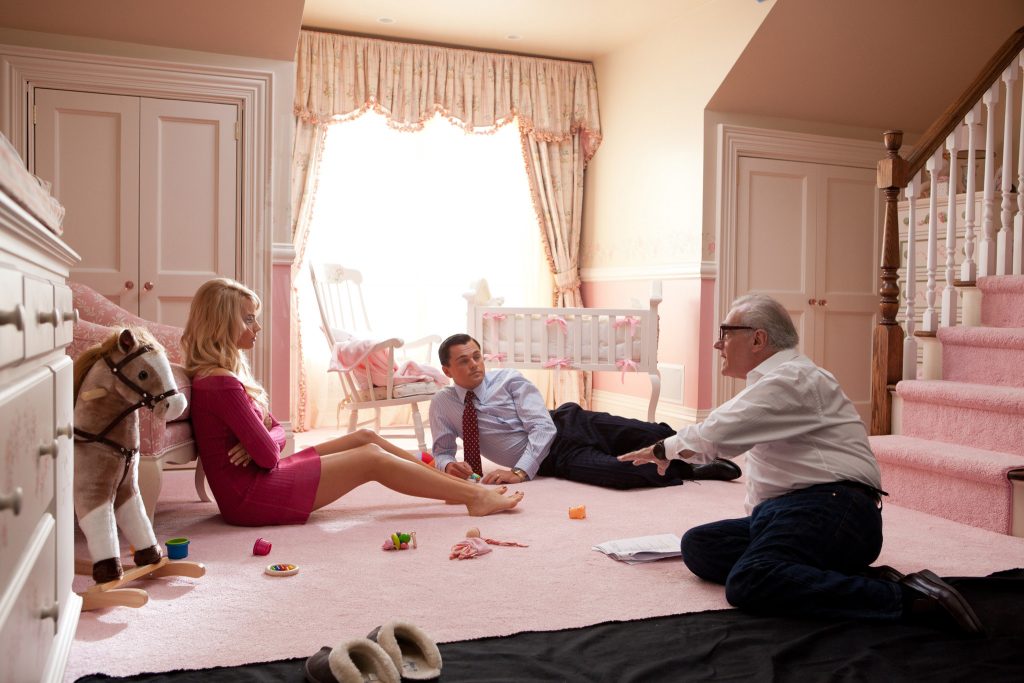 Leonardo DiCaprio and Jonah Hill here give career-best performances and grant the film its liveliness and raw sense of danger, while Martin Scorsese’s directing coupled with the work of his long-time friend and collaborator, editor Thelma Schoonmaker, make the film feel like a literal joyride. While it is not for the young or the weak-hearted, The Wolf of Wall Street is something that should not be missed, a fun time dissolving morals in an attempt to redefine them more clearly. Here is #10 in the list of Best Films of Martin Scorsese. 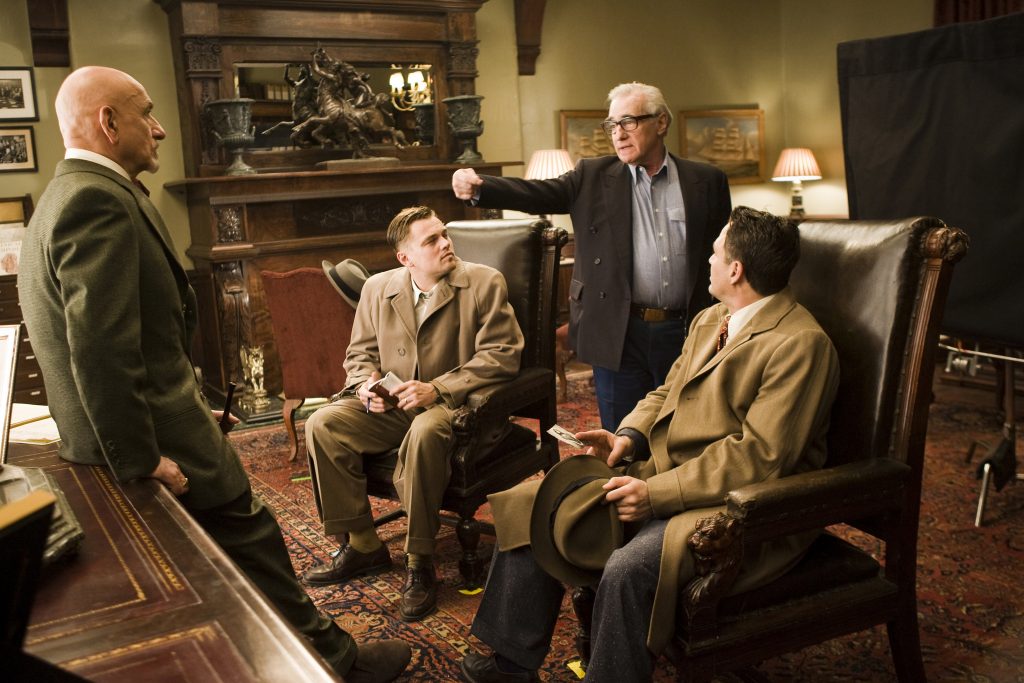 This is a film to forever shut up those who say that Martin Scorsese only makes gangster movies. A psychological thriller with heavy neo-noir influences, Shutter Island tells the story of two US marshals that go to a distant island to investigate the disappearance of a patient from an asylum, only to uncover shocking truths about the place.

With an ending that gives new meaning to the word ambiguous, dim cinematography that somehow manages to convey a feeling of doom and claustrophobia in an open space and an incredibly powerful performance by Leonardo DiCaprio, this film is both heartbreaking and tense, establishing two branching plots that continuously intertwine in the protagonist’s head, and leading to a grand finale that answers but one question: everything happens in one’s mind only. 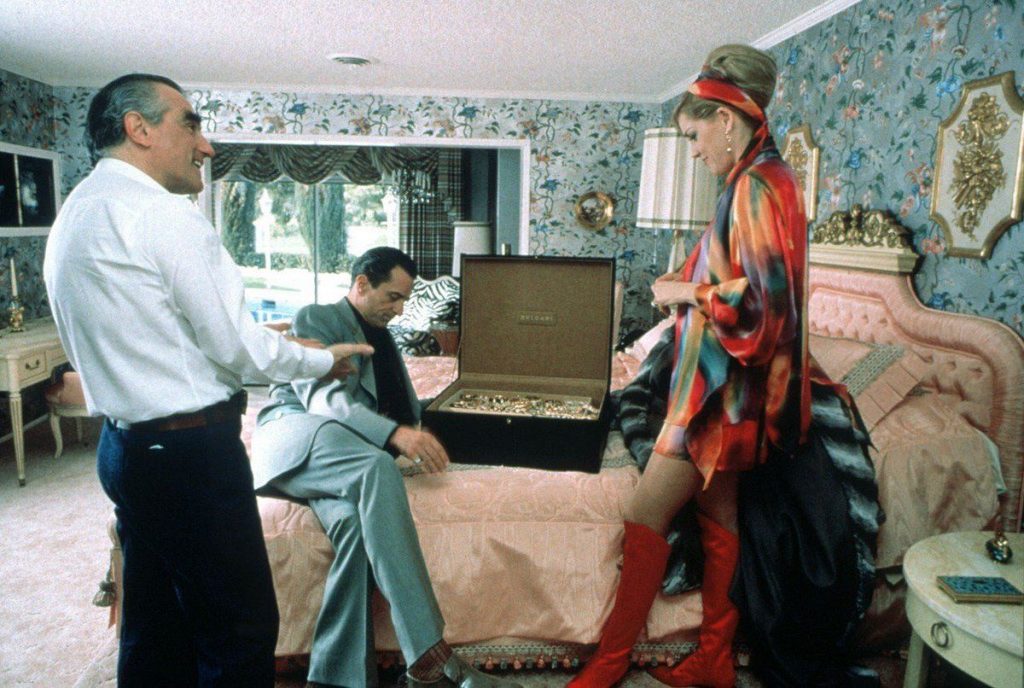 Very few films open with an ending, and those that do have a very clear goal in mind, “this is what the film is about, nothing else.” As we see Robert De Niro’s character, Sam Rothstein, blow up in his car just as the film starts, it is very clear that this is a film about the inescapable force of destiny and the fatalism that naturally comes with it.

Related: Why Casino Is Better Than Goodfellas?

Casino tells the story of Spade, a casino owner in 1970s Las Vegas, as he tries to balance work and family, the thrill of craps and the pressure of the overseeing organized crime family. Extremely violent in every sense of the word, blending physical brutality with mental warfare, this intensifying epic has stood the test of time for 25 years now and remains one of the best films Scorsese has ever made. Here is #8 in the list of Best Films of Martin Scorsese. 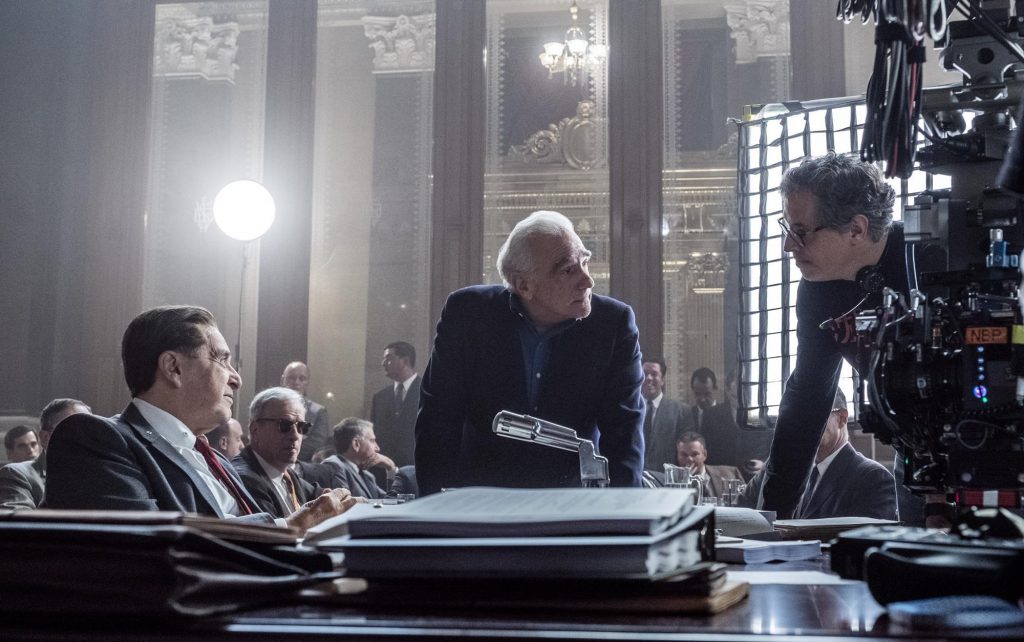 Watching Martin Scorsese’s latest mafia epic leaves you no choice other than to feel the deepest appreciation for the craft of filmmaking. Robert De Niro, Joe Pesci, and Al Pacino, the holy trinity of gangster movies assemble to bring life to an epic story spawning decades, revolving around the wrongdoings of the organized crime families, their deep power and influence over the biggest of matters, and the lives they led outside the corruption and bloodshed.

With a runtime of three and a half hours, The Irishman (subtitled I Heard You Paint Houses) doesn’t exactly fly by; what it does, instead, is taking its sweet time to tell a story rich with details in the most complete of ways. It is exhilarating, compelling, emotional and truly, truly mesmerizing. 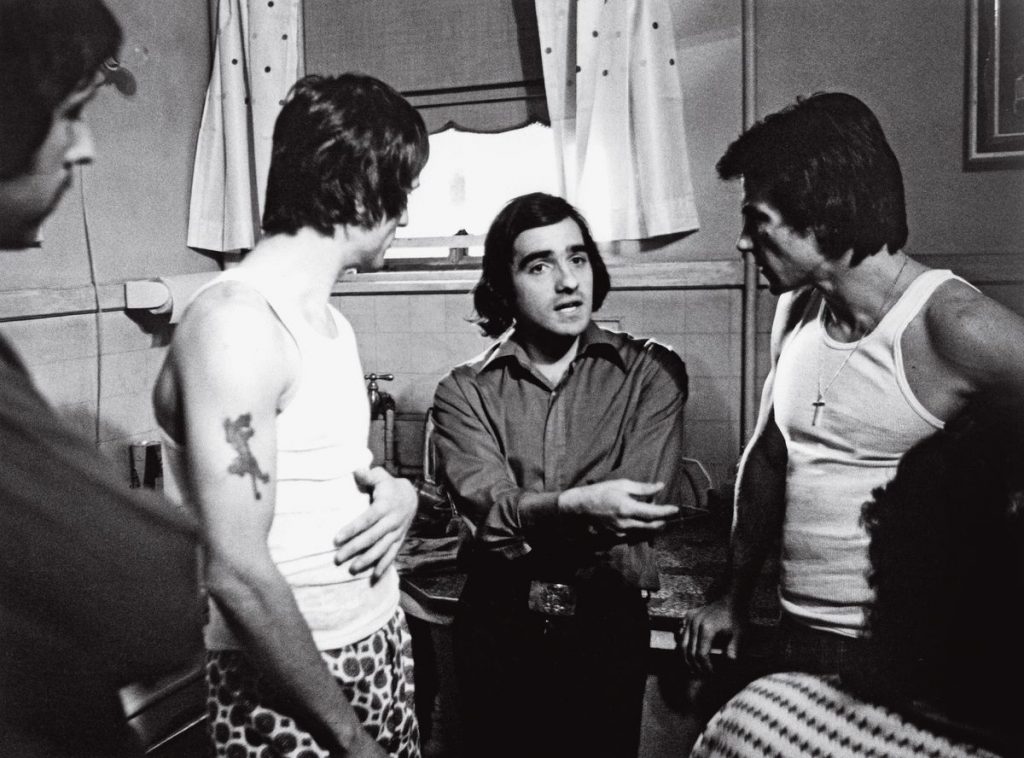 “You don’t make up for your sins in church. You do it in the streets. You do it at home. The rest is bullshit and you know it.” And so Mean Streets starts, with a declaration of its focus, of its quest and its dilemma, the film’s unorthodox opening scene may be taken to mean that the director is forcing his take and view on the film on his audience, but for me, it serves as a way to fortify the film’s main theme and therefore explore it more thoroughly without fiddling with other potential themes that are not even there, I mean, why search for answers when there aren’t even any questions asked, right?

Read: How Mean Street Explores The Theme Of Penance And Salvation

Mean Streets is a 1973 film revolving around a small-time hood, Charlie (Harvey Keitel), who must choose between rising in the mob and concurring to his uncle’s wishes, continuing to look out for his younger reckless friend Johnny Boy (Robert De Niro), a small-time gambler who owes money to pretty much everybody, and a secret love affair with Johnny’s cousin Teresa. Mean Streets established Martin Scorsese as the master of the crime thriller, a film made by a person who has a massive passion for films, with a unique and light visual style, incredibly complex and intriguing protagonists, a captivating and fun plot and a nod or two to the big fans of this fabulous director. Here is #6 in the list of Best Films of Martin Scorsese. 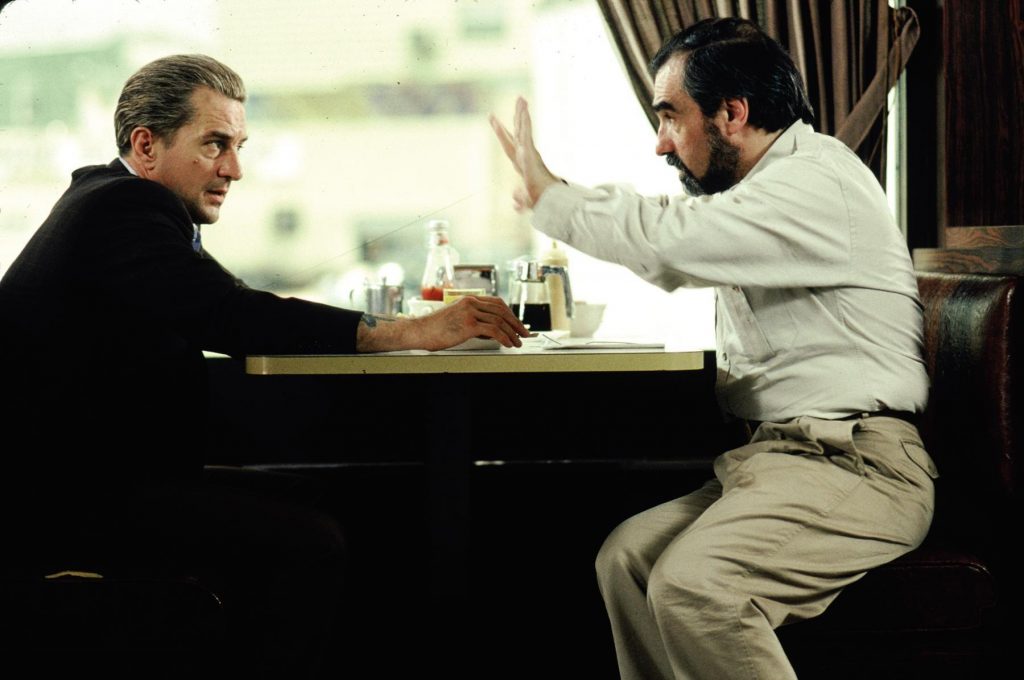 Goodfellas is the definition of a classic, a film that is deeply imprinted into the psyche of film lovers all around the world and a masterpiece that people have kept revisiting year upon year for three decades now. Telling the story of Henry Hill as he climbs from a petty criminal to a first-rate gangster in New York, Goodfellas’ plot spawns over thirty years and implements Scorsese’s notions of righteousness and morality perfectly, making sure justice is always delivered.

Goodfellas is famous for many things, the genius red lighting in the opening scene that inspires terror and a twisted alteration of glamour, the “funny how” scene that somehow manages to portray and emphasize the fear-inspiring status of the tough guy more than anything else in the film, and the completely improvised dinner scene with De Niro, Pesci and Scorsese’s mom, and it is the combination of all these things that make Goodfellas the timeless classic it is. 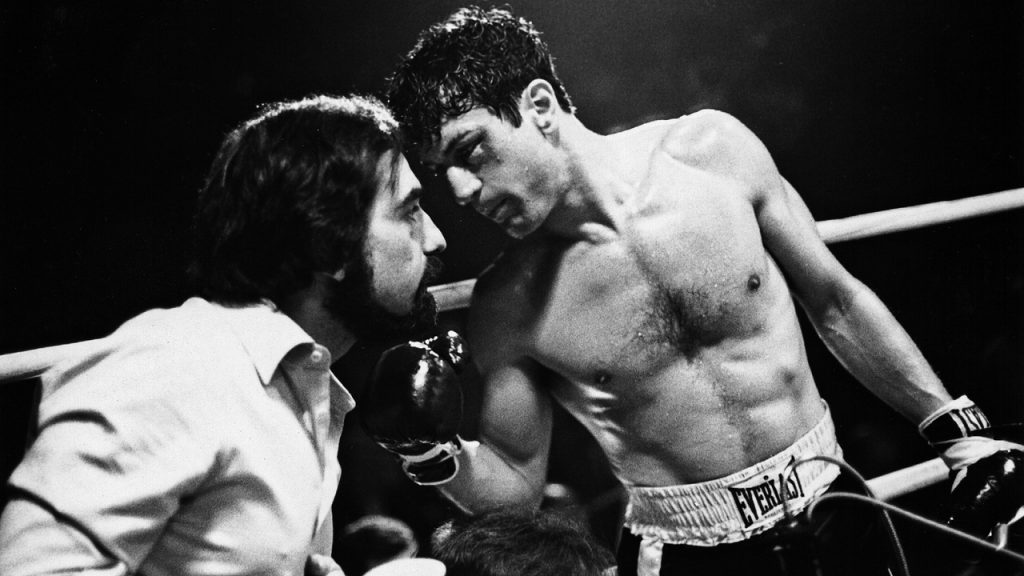 A film about boxing but not really, Raging Bull tells the story of Jake LaMotta (Robert De Niro) as he climbs through the ranks to get a shot at a boxing title while his personal life gets more and more messed up. Martin Scorsese was at that time Michael Powell’s protégé, and he advised him to shoot the film in black and white, a decision that came to fruition and achieved its goals of glamourizing the subject matter while at the same time, dramatizing it.

This film is an example of perfect cinematography and manages to make a boxing match just as exciting as a heated argument; the camera work here is unmatched. Raging Bull is more character study than a boxing film, taking a deep dive into Jake LaMotta’s psyche and exploring notions of grandeur and self-esteem, the quest for redemption and the sacrifices it requires. Here is #4 in the list of Best Films of Martin Scorsese. 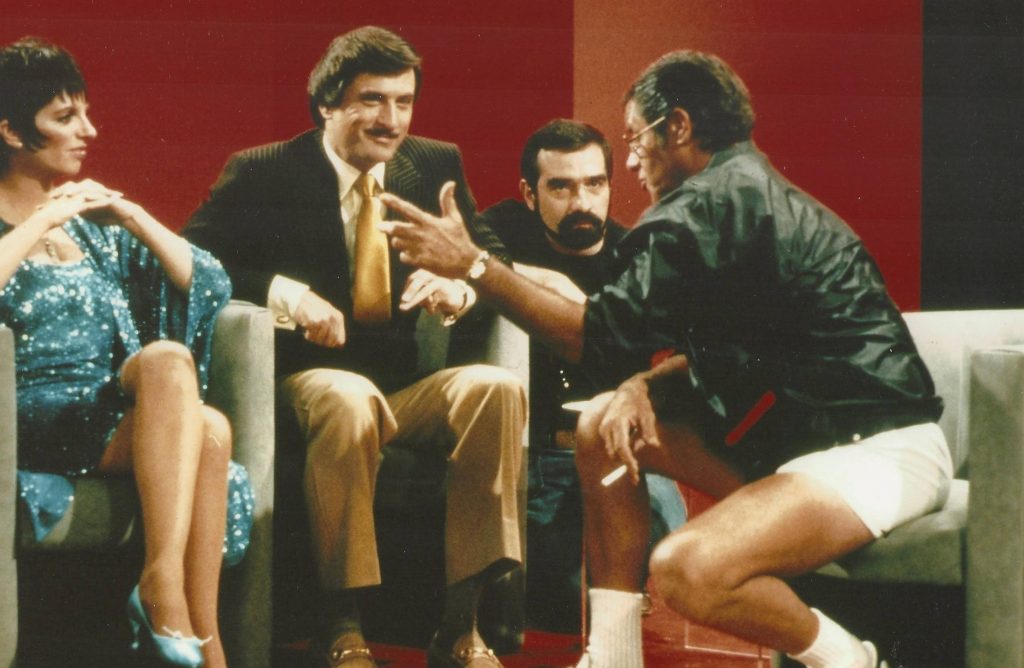 Although I place The King of Comedy as my third favorite Scorsese picture, I am completely convinced that this is Robert De Niro’s best performance ever. His portrayal of Rupert Pupkin perfectly depicts the desperate fascination this character is built upon. The film is about a hack comic who is utterly obsessed with a talk show host (played by Jerry Lewis) and is ready to succumb to any means possible to get an audience with him.

This is the film that directly inspired Todd Philips’ Joker, and “lent” it several scenes, mainly the one in which Rupert is daydreaming about being the host of his own TV show and having thousands of people call him The King of Comedy. An honest portrayal and study of the human desire for recognition, and the desperate measures one can be driven to. A masterpiece. 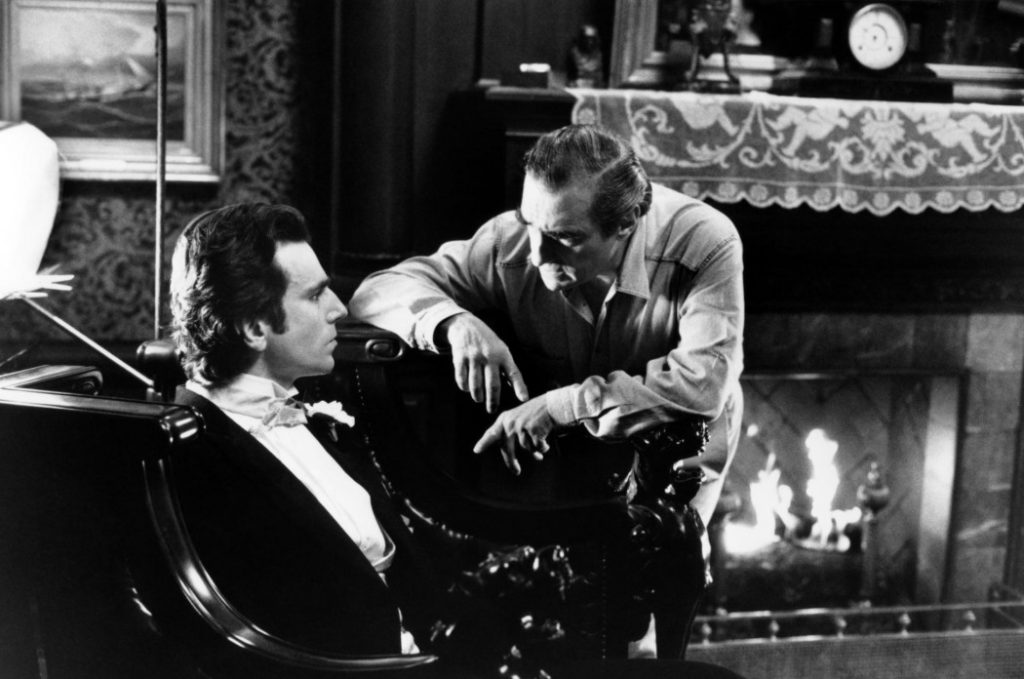 Even as it placed this high on the list, I still feel a little bad about not giving it the number one spot. The Age of Innocence is something singular, even in Martin Scorsese’s unique and varied filmography, it is sensual, elegant, and mesmerizing. Telling the story of a lawyer who is happily engaged and deeply conflicted about another woman he loves, with incredibly powerful performances by Daniel Day-Lewis and Michelle Pfeiffer, and gorgeous set and costume design, this period piece remains one of the most beautiful and heartbreaking renditions of love and sensuality ever put to screen.

This film is further proof of Martin Scorsese’s wider-than-life range, a man that can make an instant classic gangster epic, and two years later, craft an achingly beautiful film about a completely different society and still make it seem just as lively and exciting as anything he has ever done. Here is #2 in the list of Best Films of Martin Scorsese. 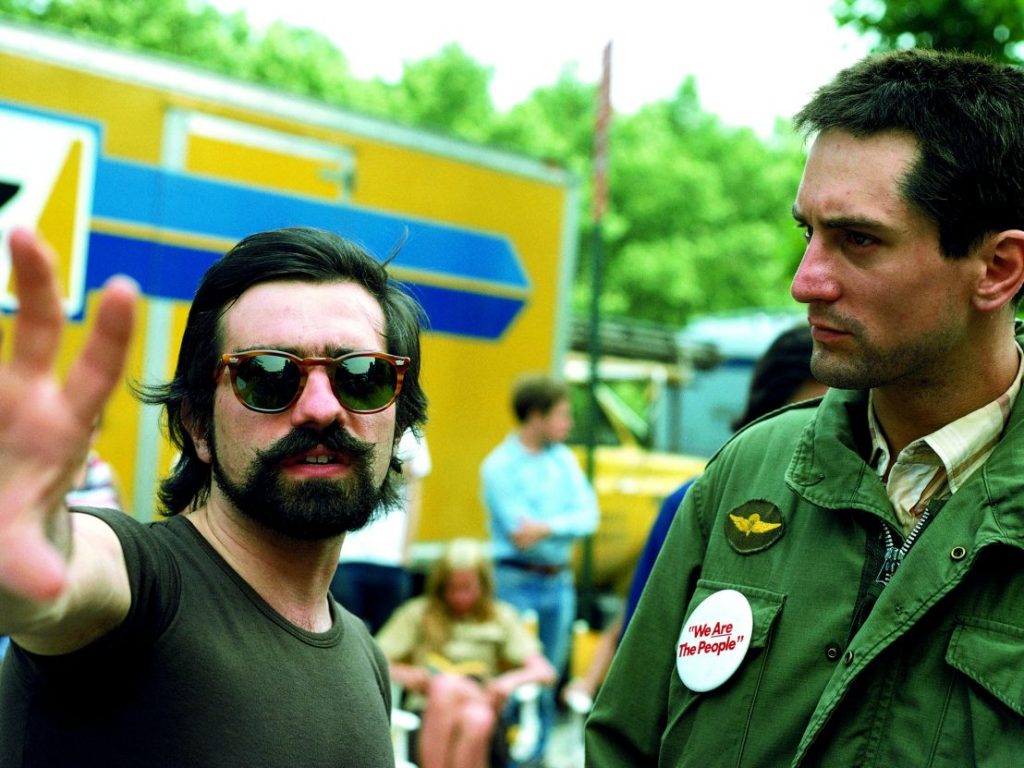 Right from the opening sequence of the film where we see the foggy nightlife of New York, coupled with Bernard Hermann’s stellar score, we know that this film is something special. Taxi Driver is one of Martin Scorsese’s earliest films and the best thing he has ever made. It tells the story of Travis Bickle, a taxi driver who works nights to keep busy and keep himself from his thoughts, as he continually observes what he refers to as the scum of the city, and as he experiences love and compassion, and as his rules clash with the city’s, we are treated to an awe-inspiring portrayal of one man’s descent into madness.

While it concerns itself with many subjects thematically, all of them worthy of noting and discussion, I think it is more essential to talk about the stylistic and aesthetic value of the film and its genius cinematography. One thing to note is the way New York is shot, grim and foul, and the way Travis observes it, for when we are treated to his point-of-view, the camerawork is always in slow motion, to convey the heightened sense of observation this character endorses and makes his goal, and ultimately, his demise.

Best Films of Martin Scorsese according to Rotten Tomatoes, MetaCritic 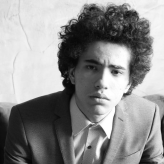