Needle Drop in Martin Scorsese’s The Irishman: There have been many examples of Martin Scorsese using the music he grew up with in order to convey a specific scene in his film. Scorsese, in that way, is perhaps the greatest filmmaker that understands the importance of a needle drop: it is to find the missing piece of his scenes, the key to unlocking how certain moments are affected by us as we view his films. It isn’t there for us to jam out to the classic songs of The Rolling Stones or 50’s Doo-wop (even though it almost can’t be helped that we sing along to them) but to create the feeling of the scene – in The Departed, for example, Scorsese uses Pink Floyd’s “Comfortably Numb” when Billy Costigan sleeps with Madolyn indicating that his anxiety of being a double agent is at ease whenever he is around her or in GoodFellas when Jimmy stares down Morrie Kessler as Cream’s “Sunshine of Your Love” plays, foreshadowing Morrie’s death as Jimmy’s normally cool demeanor decreases around Morrie throughout every second of this moment. And, of course, an entire essay can be written about his use of “Gimme Shelter,” one of the greatest songs by The Rolling Stones.

But the thing with his needle drops is that he only ever places a song once in his films. As much as he loves “Gimme Shelter,” he only uses it once in each film it plays in because the intention is to satisfy that marriage between image and sound. But what if a song is played more than once? What is the intention of playing a song not once, but three times in a movie? I’m, of course, talking about his most recent masterpiece, The Irishman, which plays the iconic “In the Still of the Nite” a record three times throughout the film, a first for any Scorsese film.

Scorsese clearly loves the song – he’s wearing his heart blatantly on his sleeve if it’s playing three separate times throughout the film – but like every single needle drop sprinkled in his filmography, there is the intention with why that specific song plays at that specific moment. Not only is there the intention for the scenes that hear the Five Satins mournfully sing the iconic song, but it’s with that song do we understand several elements of the film itself: it may be the most important needle drop in Scorsese’s entire career.

Related to Scorsese’s The Irishman: Martin Scorsese’s 10 Favorite Films Of All Time

In typical Scorsese fashion, The Irishman opens up with a tracking shot. But this tracking shot isn’t fancy or slick like the iconic GoodFellas shot: the camera drifts and jumbles and bumps its way until it finds our storyteller for the film sitting alone in a retirement home. Frank Sheeran, played by Scorsese’s right-hand paisan Robert De Niro, sits in his wheelchair as we plant ourselves in front of him as he preps to tell us his story. 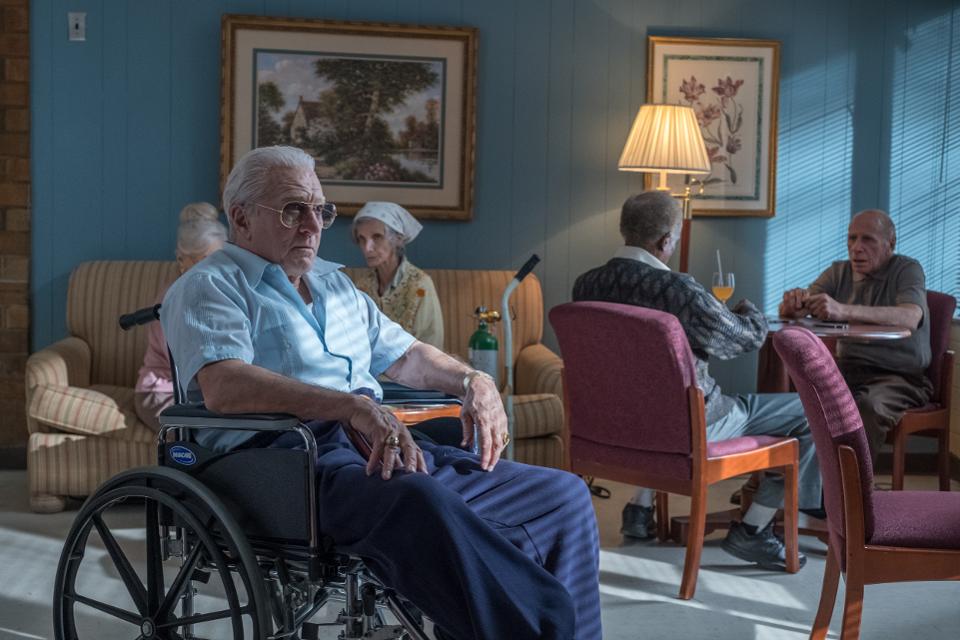 The song, at this moment, is used to establish the film as something completely different than any of Scorsese’s other Gangster films: this is one built on sadness and pain and about getting older – the song often delicately sings to us about the light and the darkness and when the camera settles on Frank struggling to sit in his wheelchair, we’re to understand that in this case, light means life and darkness means death: by establishing this song as we’re introduced to Frank, we’re to understand that he is closer to death, yes, but how he’s completely alone – in darkness, it is nearly difficult to see others around you.

It’s not until after the death of Jimmy Hoffa at the hands of Frank do we hear “In the Still of the Nite” again. This time, the song is played over the wedding of Ray Romano’s Bill Bufalino’s daughter’s wedding as he walks her down the aisle as several people stare at his daughter. The camera glides towards Frank and Russell Bufalino (Joe Pesci) only a few times because the focus is the daughter – it must be mentioned that, rather brilliantly, the scene is shot in slow motion, almost as if it were a burst setting on a camera. The song’s lyrics are not played over to match the wedding but those partaking in it: Frank, Russell, and even Bill are not focused on the marriage but Jimmy’s death. It is the betrayal of all three men shown that lead to Jimmy’s death, especially Frank. The line in the song that stands out here is this one:

Related to Scorsese’s The Irishman: Bringing Out The Dead (1999)

The line alludes to Frank’s initial betrayal of Jimmy’s friendship – the slogan Jimmy used in his campaigns, “I’m a friend of Jimmy Hoffa,” is proven to be broken as Jimmy’s best friend was the one who brought him to the night, meaning death. The “promise,” in this case, is the friendship – the song is played ironically, as a reminder of Frank’s betrayal; the promise was their understanding of each other and that they’d be friends until the end: Scorsese proves that in this scene, the song is used as a reminder of what didn’t end up happening.

The final time “In the Still of the Nite” is used in The Irishman is as the credits initially roll. I find that this needle drop is easier to talk about than the rest because it’s rather simple as to what this needle drop means. The film’s final shot is Frank, immersed in shadow, with one little bit of light shining through the door that remains slightly open. The song is used after this as a reflection of Frank’s story and his incredible guilt in killing Jimmy, a pain that has lingered ever since he pulled the trigger in that house. The ending lyrics of the song seem to allude to this: 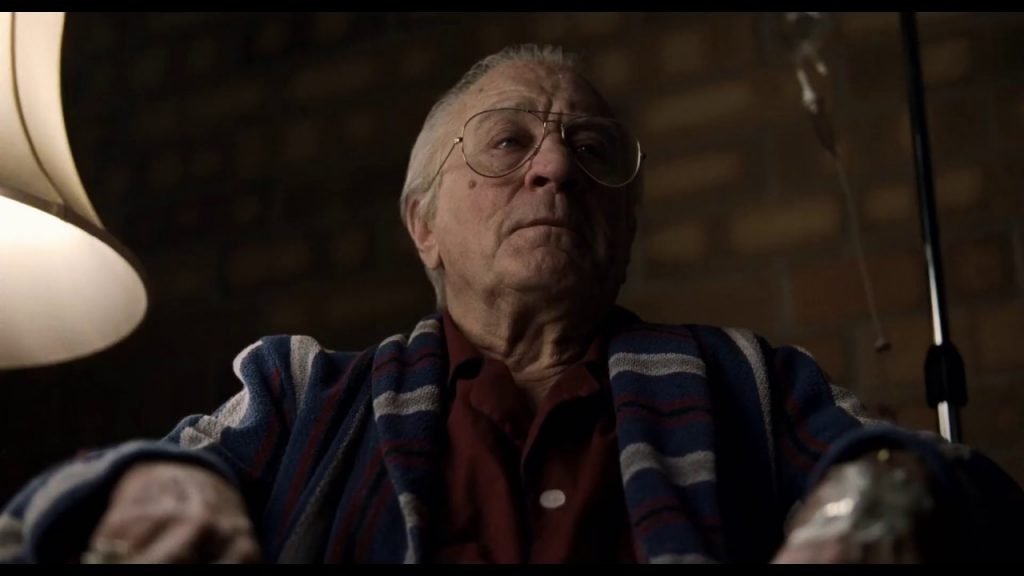 The regret in killing his friend has driven Frank to complete and utter guilt: he wishes so desperately to take back that moment and live with Jimmy as his friend but allowed work to control how he should feel. And with nothing left, Frank can’t help but constantly remember the last time he saw Jimmy – and remember why he’s no longer there. The Five Satins sing to us over the credits to allow us to remember their journey and in doing so, connect to our own lives in which we’ve allowed people to slip away.

On top of being played in several different spots of the film, the song is a reminder of its creator, Martin Scorsese. You’ve read countless pieces on how The Irishman is Scorsese reflecting on the genre he helped reinvent with misty eyes – it feels like the defining, final film in a genre that’s captivated so many for decades – and make no mistake: this is one of the master’s most personal and revealing feature films.

And with “In the Still of the Nite,” we’re able to see just how melancholic and personal the film was for him reflecting and meditating on his beloved Gangster genre and the song, in its slow and mournful singing, sees Scorsese saying good-bye to the genre that helped him become one of the greatest filmmakers to have ever lived and the most admired and beloved American filmmaker the medium has ever seen. The song’s final lyrics (which you can see above) pertain to Scorsese’s final good-bye to both the genre and perhaps Cinema, even if he makes more films after this: the memories will always be there even when he dies – his Cinema is eternal and through it, we can all experience the embrace of the Master who brought us classic after classic.