Home»Articles»Ser Brienne of Tarth: A Knight of the Seven Kingdoms
Articles/Essays

The much-anticipated final season of Game of Thrones had a rather tepid start wherein, following the tradition of the last two seasons’ first episodes, we saw various characters encountering each other after ages. With all the obligatory unions and reunions done with, the second episode, without providing the excess of spectacle and drama that we’ve come to associate GoT with, deftly stitched together various loose strands. Hatchets are buried, everybody reminisces about where they started and how far they’ve come, and even sing a song. The mood, however, is not of celebration. It is the calm before the storm; it is the resignation and weariness before an impending death.

The real winter is finally here as the Night King’s army is merely a sunrise away from Winterfell. Amidst all this tension, there are moments of levity, particularly brought on by Tormund Giantsbane’s question, ‘Is the big woman still here?’ The question is pertinent, for it references the title of the episode, ‘A Knight of Seven Kingdoms’. Brienne of Tarth, who loathes to be called ‘Lady Brienne’, finally accomplishes her life’s goal. She is born as a knight on a night when everyone is preparing to die. That she gets the honour from Jaime Lannister is a tacit acknowledgement of their love and respect for each other (much to the disappointment of Tormienne shippers). However, Tormund proves to be a catalyst in raising Brienne’s stature. Almost every male character in Westeros who has set eyes upon Brienne has at some point looked at her with scorn for daring to do a man’s job. Podrick and Tormund are the only ones who admire her for her bravery and for exactly who she is – a person of honour. Their nudging emboldens her to accept Jaime’s offer to knight her. The sheer tenderness of that scene, the bliss and the sense of fulfilment in Gwendoline Christie’s eyes is – in the age of peak television – matched only by Peggy Olsen and Don Draper’s relationship in Mad Men. 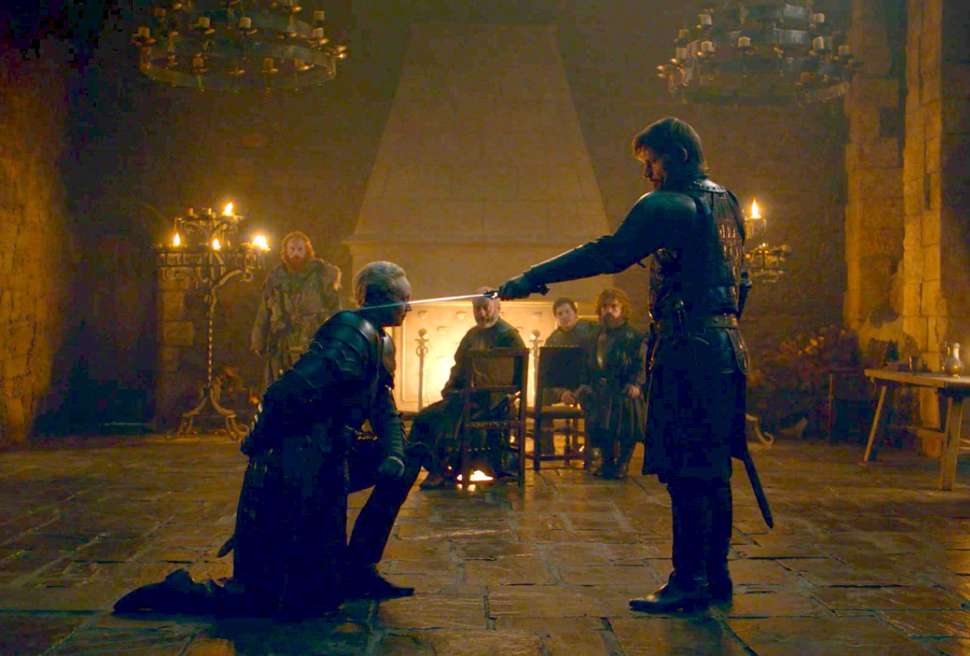 The scene also marks an important shift in the role of traditional values. The characters know that a major change is about to take place, a new world order (or disorder) is about to come into effect. In the face of catastrophe, it does not matter whether women can be knighted or not. To defeat the common enemy, both men and women have to march shoulder-to-shoulder. The moment also provides a satisfactory completion to Jaime’s arc. From thinking of her as an unworthy ‘creature’, to finally realising that she is more a knight and a fighter than he has ever been, Jaime redeems himself. Once in the Kingsguard, he pledges his allegiance to her and asks to fight under her command. It is worth noting that the swords they own – Widowmaker and Oathkeeper – were made by melting and diving Ned Stark’s sword. Both Jaime and Brienne, under the command of Lannisters and Renley Baratheon, respectively, fought against the Starks. Now they are together – the two swords are together – fighting to defend Winterfell.

The only issue with this narrative circle is that it makes both Brienne and Jaime characters worth rooting for. And as we have known since season one, the characters we root for certainly die. Therefore, keep those tissues handy, not just to mourn either or both of these characters’ departure, but also because the episode emphasised on at least four occasions that the Crypts of Winterfell are the safest place to hide. To spell it out properly: the place when the dead are laid to rest, while an army of zombies approaches whose leader can reanimate even skeletal remains, is supposedly the safest place for women and children and the Hand of the Queen. The sheer genius of this idea can – and will – make many turn in their graves.