Tony Soprano – Made in America

Tony Soprano: Made in America – The first fifteen minutes of  The Sopranos‘ pilot reaffirms my belief in the saying that good art can be determined by just a couple of minutes of observation. The opening shot places the protagonist, a middle-aged man, between the legs of a female sculpture. He looks intently at it for quite some time, with a puzzled look on his face. He then gets invited by a woman to come inside, and it is subsequently revealed that he has actually come for a therapy session. The man says that he is a waste management consultant and goes on to converse with his psychiatrist about his family and the innocence of ducks, in a pretty civilized manner.

When he is about to talk about meeting an “associate” who owed him money, the psychiatrist interrupts him and reminds him about doctor-patient confidentiality. The man assures her that he just had “coffee” with the “associate.” We then see the protagonist chasing his “associate” in his car and then brutally beating him up. Thus, the first fifteen minutes familiarize the viewers with the show’s inseparable blend of dark humour and drama, which in my opinion constitutes the essence of this show. When it premiered back in the 90s, The Sopranos was unlike anything, and even today, amongst a crowd of innumerable crime drama shows, it manages to stand out and shine.

Tony Soprano, the protagonist, is a New Jersey mob boss who has a hard time balancing his nuclear and crime family. He lives in an affluent New Jersey suburb with his daughter Meadow, his son Anthony Jr. (commonly known as A.J.), and his wife Carmela. Tony can be called an embodiment of the American Dream. He has everything that would classify him as a successful man. He is rich, lives in a big mansion, has a happy family, and his subordinates respect him at work. Yet, Tony doesn’t feel content. In one of his therapy sessions, he describes himself as the “sad clown; laughing on the outside, crying on the inside.”

At its core, David Chase’s The Sopranos is a parable of a contemporary American family, navigating through the changing political and social climate of 21st century America. Throughout the series, Tony tries to establish an amicable relationship with his family, but his mob business and selfish needs surely get in the way. His relationship with Carmela is perhaps one of the most complex portrayals of marriage in television history. She detests Tony for his extramarital affairs and is somehow forced to live with some kind of compromise. Tony’s daughter loathes him for his connections to the Italian mafia and his son is someone that he loves but is not really proud of. Tony gives his children access to every opportunity they want, as he does not want them to have the same dysfunctional upbringing as he did. In his growing up years, Tony was subjected to a pessimistic social environment that acted as a barrier to his self-realization. It never taught him to distinguish between right and wrong.

His father’s mob business taught Tony to take things by force, and the nihilistic and overly critical attitude of his mother sowed the seeds of self-doubt in an early phase of Tony’s childhood. Her constant nagging and criticism made Tony wonder whether he is capable of doing anything in life. There’s a pivotal moment in the second episode of the third season when Tony watches Public Enemy and gets teary after watching a scene in which the main character’s mother joyfully prepares her home for her son’s return. But she is oblivious to the fact that her son has been gunned down. For Tony, that moment was a realization that he never had a loving mother and that his life would have probably turned out differently if only he had one. This particular moment accentuates a human quality within this monster and moves him beyond the mobster stereotype. This can also be used to explain his desire for women, which is actually a superficial reflection of what is really inside him. He doesn’t wish to dominate women. All that he wishes to do is to fill the void that was created due to the lack of care and compassion by his nihilistic mother, who never loved him and even convinced her brother-in-law to order a “hit” on her own son.

Another intriguing aspect of the show is the blend of realism and surrealism, which we get to see in Tony’s dreams. They are very much reminiscent of Luis Brunel’s works. Characters that he had slain come back to haunt him in his dreams. These dream sequences reveal the fears and desires that inhabit Tony’s subconscious. We get a further psychological insight into his insecurities and feelings through his therapy sessions with his psychiatrist Dr. Melfi, who is the only one Tony really opens up to. By pitting Tony and Melfi with each other, Chase attempts to bring out the dichotomy between two types of people – the Dionysian and the Apollonian. Tony is a Dionysian, or in other words, irrational. On the other hand, Melfi can be categorized as an Apollonian- cultured and engaging with logic. 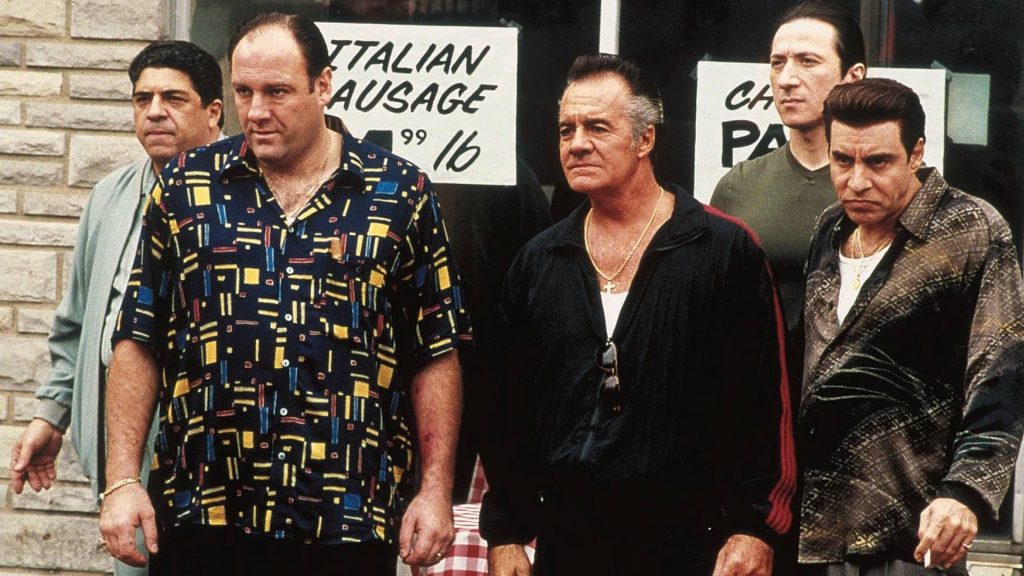 In his therapy sessions, Tony only pays heed to what he likes and rejects anything that is meant to change his outlook. Tony visits Melfi only to give a vent to his suppressed feelings and to assure himself that he is somehow trying to get reformed. The show may be about many things, but it is definitely not a parable of a man on the path of reformation. In a heated exchange of words between Tony and Melfi in the ninth episode of the second season, Tony tells Melfi that his nephew Christopher wouldn’t go to hell as he is just a “soldier” who is doing his duty and following orders. Tony basically justifies the acts of killing by gangsters as something done during their “line of duty”. He believes that he wouldn’t go to hell either as he is not a twisted man who kills for fun. Tony thus fabricates a delusional reality for himself that motivates him to commit sins without thinking about the moral consequences.

Tony Soprano feels embarrassed about visiting a psychiatrist as it poses a threat to his own masculinity. In the pilot, he describes Gary Cooper as the perfect role model of a man to Melfi. He describes him as the “strong, silent type”. Tony’s notion of masculinity is also shaped by the influence of popular culture. For him, the ideal man is the one who is tough as a bull and is unaffected by what is happening in his environment, just like in the classic Hollywood movies. The influence of cinema doesn’t stop with Tony. The mobsters of The Sopranos quote lines from the classic gangster films of Scorsese and Coppola. These films make them believe that there was an apparently glorious mob era of the past, when the mafia was a well-organized lifestyle built on respect and loyalty; when family and friends reigned supreme.

In the show, we also get to see Christopher’s obsession with writing a script about gangsters. In a screenplay book, he comes across the term ‘character arc’ and questions about his life’s own trajectory. In the pilot, he declares to Tony that he would follow in the footsteps of real-life mobster Henry Hill (the subject of Scorsese’s Goodfellas) and “sell” his story about his life as a gangster to Hollywood producers. This shows the appeal and the apparent “glory” that is often attached to mob life. Christopher is a pursuer of the glorious American Dream, the aspirations of which are no longer confined to the geographical territory of America only. He wishes to make his presence known in this country, which has the most seductive culture in the world.

To say that The Sopranos is a groundbreaking show is definitely not an overstatement. It ushered in an era of ‘Golden Television’ in which writers and directors could present true and unfiltered art. It is a landmark in television history and antiheroes like Walter White and Donald Draper owe a lot to its creator David Chase, who indubitably took a major risk by conceptualizing an antihero who was in complete contrast to the characters that were written for television at that time. Tony Soprano was everything that a television character was not supposed to be – erratic, violent, and racist. The credit for the creation of such a compelling character goes partly to the writing, and partly to the actor James Gandolfini, who made Tony charming and terrifying in equal parts.

Tony Soprano is not a sadist who kills for fun. He indulges in self-loathing and blames himself for passing on his genes to his children when he finds out that his son is also suffering from panic attacks. He shows concern for the ones who are close to him and he seems to love children and animals. In my opinion, Tony Soprano is not what one would call a psychopath. This is also not to suggest that his violent and racist attitudes should be excused. The character of Tony is, in itself, a baffling paradox. He is a violent mob boss with a sensitive psyche.

By the time the credits of the series finale roll, Chase manages to pull off an almost impossible feat. He manages to create an equally twisted and charming character that we end up caring for. For those who watch the series from the beginning till the end, the cut-to-black is just not enough to convince them that it’s the end of the road for Tony, a guy who had managed to survive a fatal bullet wound in the same season. In the finale scene of the show, A.J. quotes a moment from season one finale when Tony told his entire family to remember the little moments of life that are good. Tony thinks A.J. is being sarcastic. By the time the show ends, Tony loses a sense of purpose in life. He no longer recognizes warmth and comfort. While the show ends on a supposedly ambiguous note, the abrupt cut-to-black, that is literally dark, signifies only an uncertain future for Tony.

I am a second-year English Literature student at Hansraj College, University of Delhi. I love writing about anything that is even remotely related to pop culture.

Peacemaker [2022] ‘HBO Max’ Review: Gunn Ensures That Names Like Peacemaker, Harcourt, and Vigilante Will Get a Cult Following

Tony Soprano – Made in America