Satire is really hard to pull off. This is a genre that demands a very specific checklist of elements for a film to qualify for this category. Even a minuscule deviation from those specific coordinates can dismantle the film’s intent. Thus, a lot of movies are plagued with almost-but- not-really- itis failing to officially don the title of satire. Here’s a film that’s two shades of earnest away from being a satire, The Stepford Wives.

Satire is really hard to pull off. This is a genre that demands a very specific checklist of elements for a film to qualify for this category. Even a minuscule deviation from those specific coordinates can dismantle the film’s intent. Thus, a lot of movies are plagued with almost-but- not-really- itis failing to officially don the title of satire.

Here’s a film that’s two shades of earnest away from being a satire, The Stepford Wives. 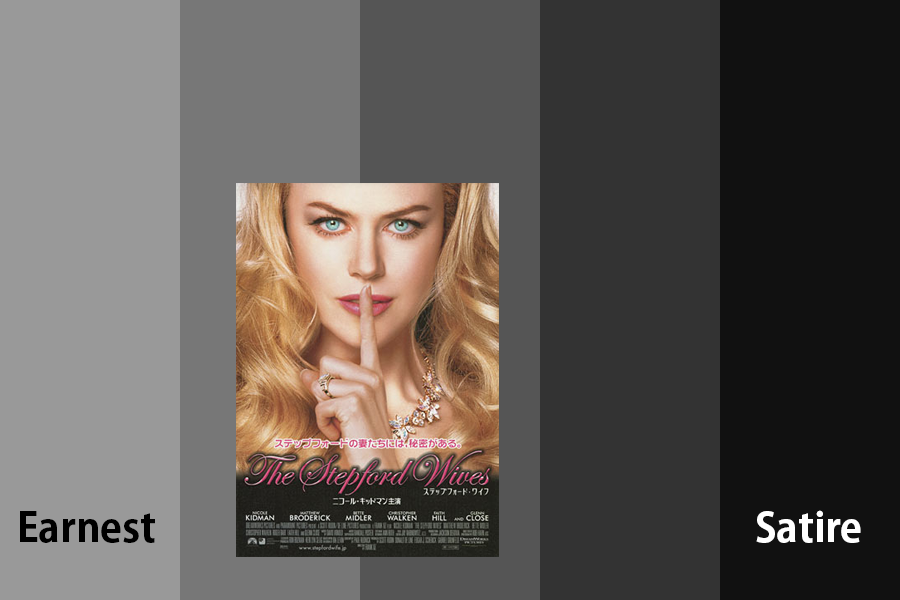 Before we get to the oohs and ahhs, let’s talk about the story. After being fired from her job, former TV executive, Joanna Eberhart has a complete nervous breakdown. As a last resort, she and her family decide to pack up and move to Stepford, a seemingly perfect town that teeters towards the eerie.

Now it’s important to keep in mind that a good premise is like a chia pet; it only grows under the right circumstances. 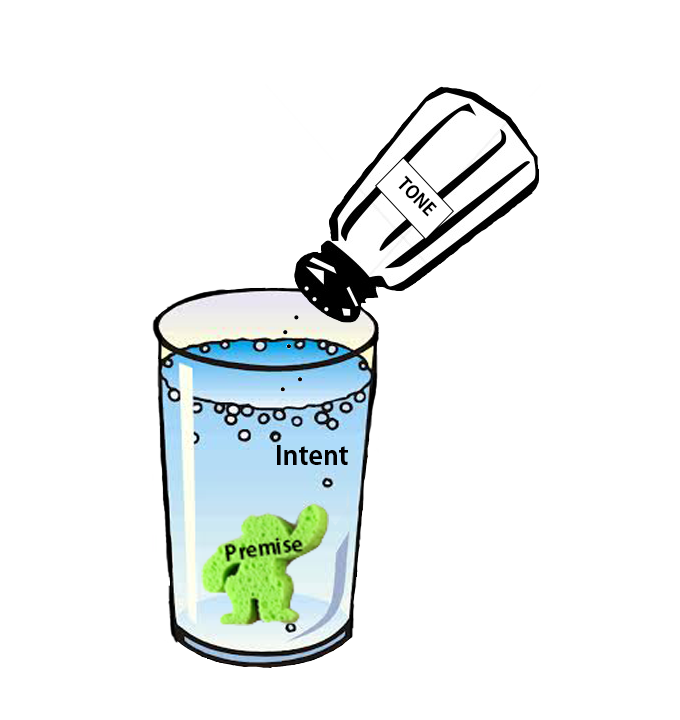 With that said, this movie didn’t initially hit its mark as a horror flick. It took a tongue-in-cheek remake to unlock its full potential which is understandable given the much-explored nature of the subject matter. I mean, the battle of the sexes isn’t anything new here. Thus, seeing as how the shock-and- awe approach wasn’t going to work, ridicule was the chosen format.

Be that as it may, this movie has a serious tone problem constantly oscillating between preachy to the point of condescension and playfully slapping the wrists of social stigma. 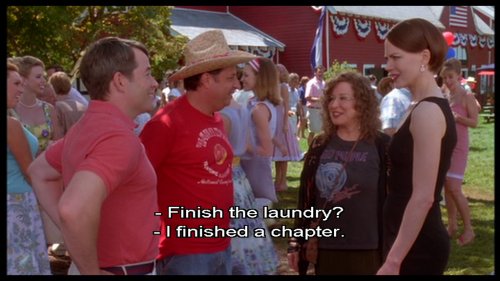 So with every slick one-liner, you get Nicole Kidman whispering inspirational quotes that even Tumblr would reject. While this dichotomy isn’t enough to feel like two separate movies, it’s distracting all the same. 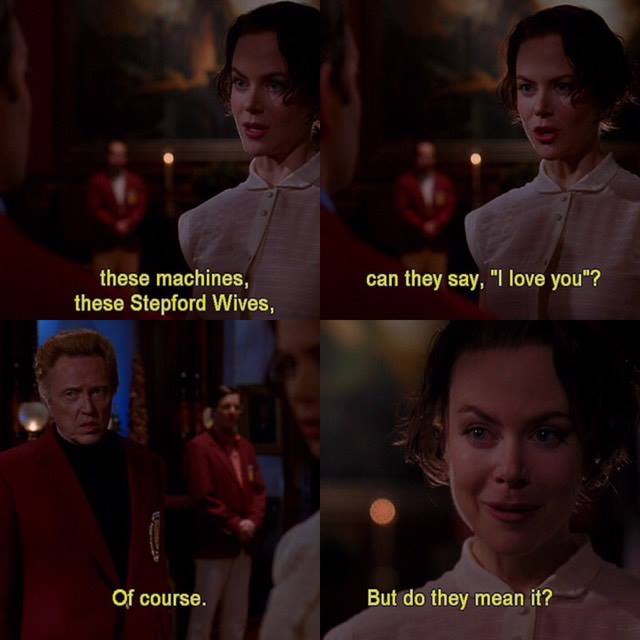 The only time the campiness is tolerated is when it’s paired with sass and exaggeration. This is best illustrated in the scene with Joanna’s work function where she pitches new TV shows for the network. Some of these proposals are so over-the-top, it’s hilarious like “I Can Do Better, I Can Do Everyone”. Such an approach resuscitates an otherwise redundant point.

Another example is the big reveal scene. After getting confirmation that the men are turning women into robots, Joanna and Walter have this big confrontation amplified by cheesy lightning effects.

Then Mike steps in and rather than have a big villainous monologue, he puts on an infomercial-like slideshow presentation about “The Stepford Way: she’s gonna love it”. Again, it’s peddling the same hammered-in message, but it works because it’s gleefully self-indulgent in a winking to the camera sort of way. 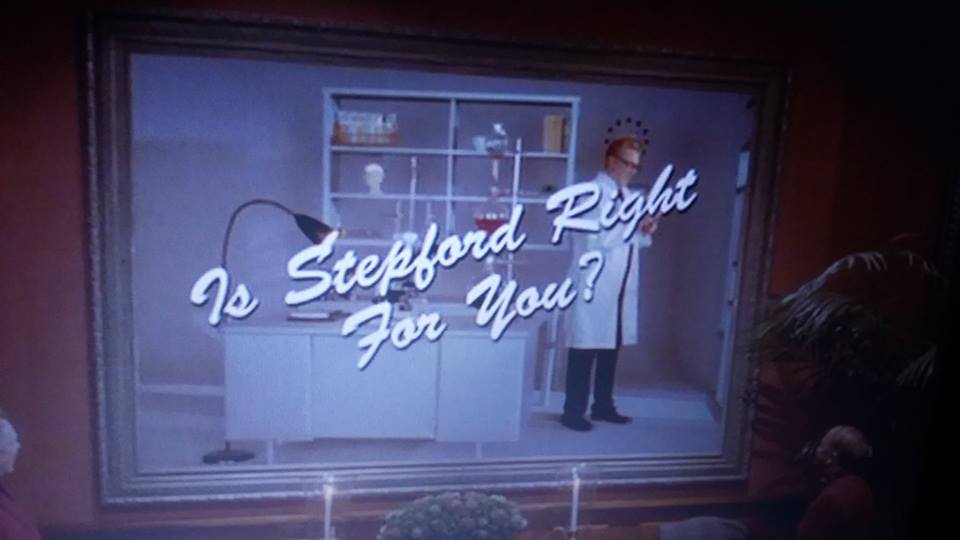 Despite going for ‘ridiculous’, this movie DOES have some legitimately creepy moments that linger a while after initial exposure. The opening scene is the biggest testament to this. On its own it bears no particular weight, but taking into account the context, it’s pretty intense.

So basically, it’s a montage of women’s advertisements from the 50s which should be a genre within itself because of how blatant such content is in its intent. It’s chilling because this was our culture for a while. 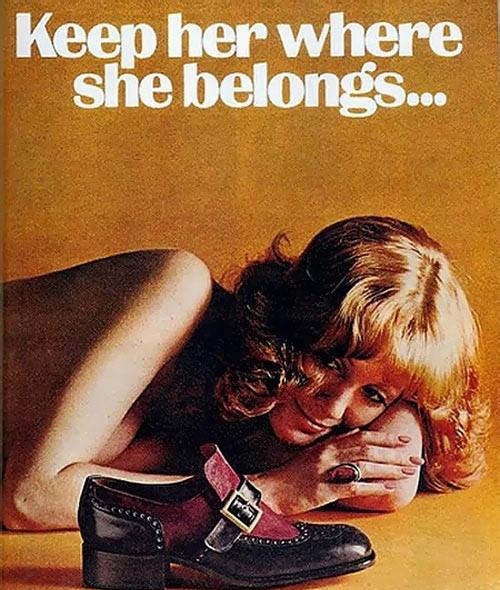 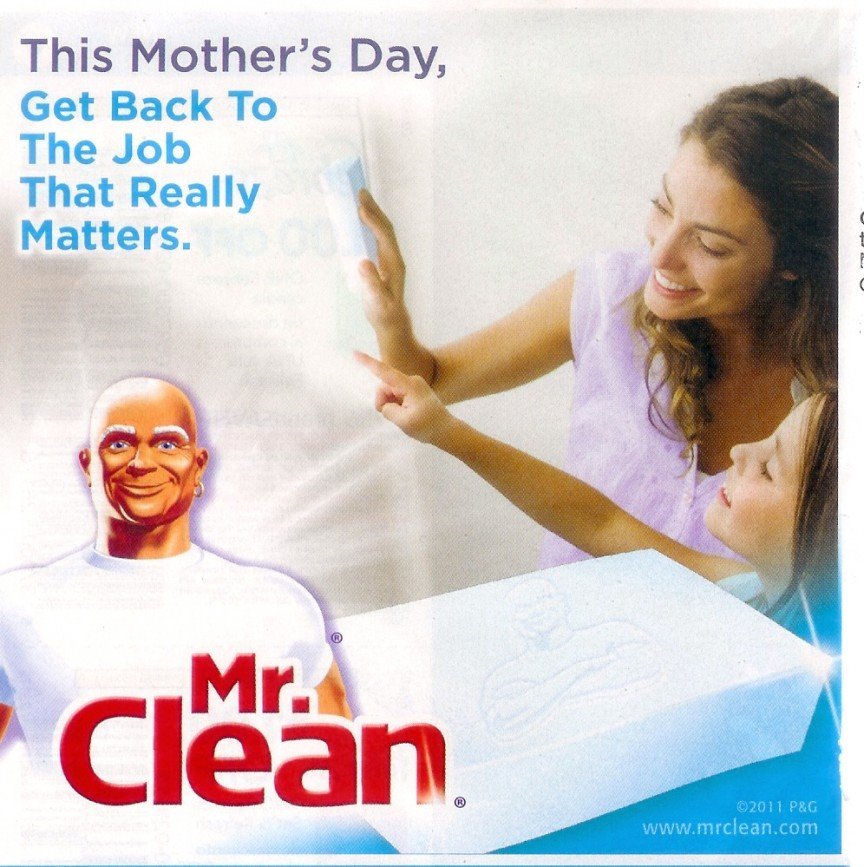 Another unsettling moment happens at a town conference after Roger’s “transformation” as his friends confront him about how he’s not “himself” anymore. These protests are met with “You can’t stop Stepford”, a phrase that instantly ripples into a collective chant meant to pacify all opposition. This scene was particularly disturbing because it was strongly reminiscent of Cabaret’s “Tomorrow Belongs to me”, a number that perfectly encapsulates the inescapable attributes of the herd mentality. 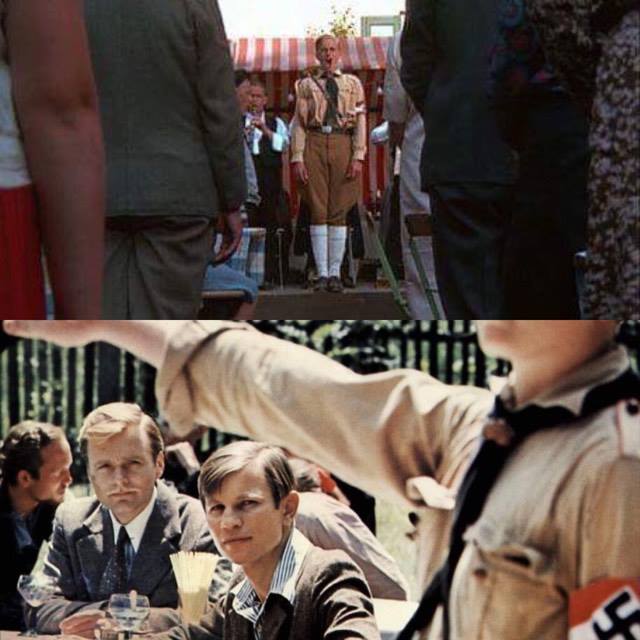 Other than the delivery and tone, this movie’s main asset was the casting choices (except for Mathew Broderick). I mean, Nicole Kidman was pretty funny as the power-hungry live wire and doting wife. Bette Midler was basically being herself (which is always a good thing),

and Christopher Walken was serviceable as the side-eyeing cynic. And then there’s the stale wafer of Hollywood, Mathew Broderick. I don’t get why this guy keeps getting work, at least Adam Sandler makes SOME effort in his productions. Put some pulse into it, damn it!

But the main attraction here was no doubt Glen Coco. She’s basically the female Vincent Price, a perfect blend of delightful and delirious.  Her story arc was pretty interesting too taking the betrayed wife archetype to a new height which kind of improves upon the initial message. Rather than make it a reverse Wicker Man cautionary tale, the remake tackles the familiar themes of oppression and sexism with a sneering novelty. 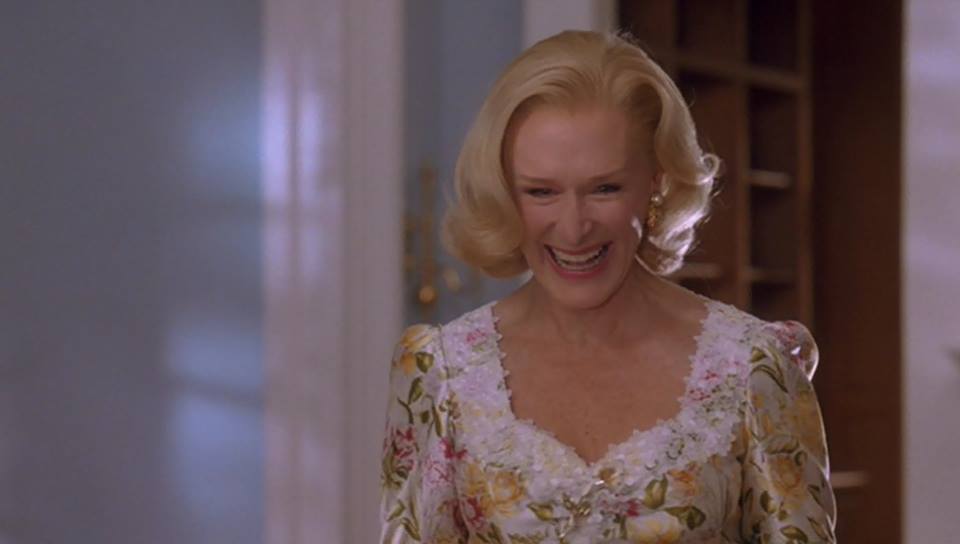 Regardless of the aforementioned merits, The Stepford Wives is far from perfect. In fact, there are some shortcomings that need to be addressed.  For starters, there’s the coupling of Joanna (Nicole Kidman) and Walter Eberhart (Mathew Broderick). Let’s set aside the acting ineptitude of the latter performer and focus strictly on the characters. 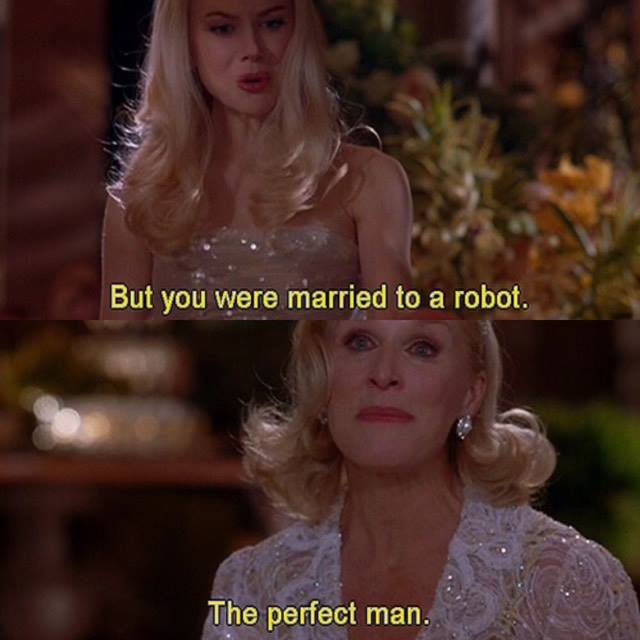 For starters, there’s the coupling of Joanna (Nicole Kidman) and Walter Eberhart (Mathew Broderick). Let’s set aside the acting ineptitude of the latter performer and focus strictly on the characters. 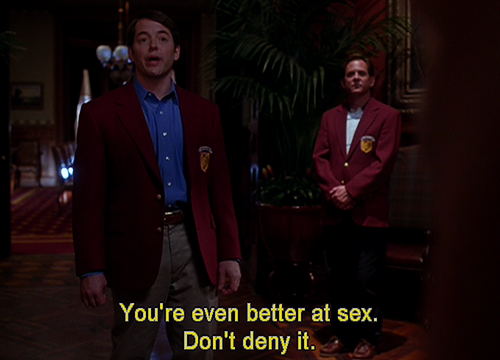 To say that this pair is implausible would be a serious understatement, so rather than list all of the things that are wrong, I shall refer you to one scene. So the two of them are sitting at the bottom of the staircase and discussing the fate of their marriage when Walter asks “why do you love me?” Joanna scrambles for an answer before deciding on “You’re my Walter”.

We already talked about the clichéd speeches that are too on the nose.  Then there are questions pertaining to the logistics of the Stepford operation like why wasn’t Roger allowed in the men’s association? He clearly showed an interest and his partner was allowed admittance, so what gives? Also and more importantly, how did the women go back to being human at the end when they clearly showed machine-like qualities? This is the one area the original movie was superior in. 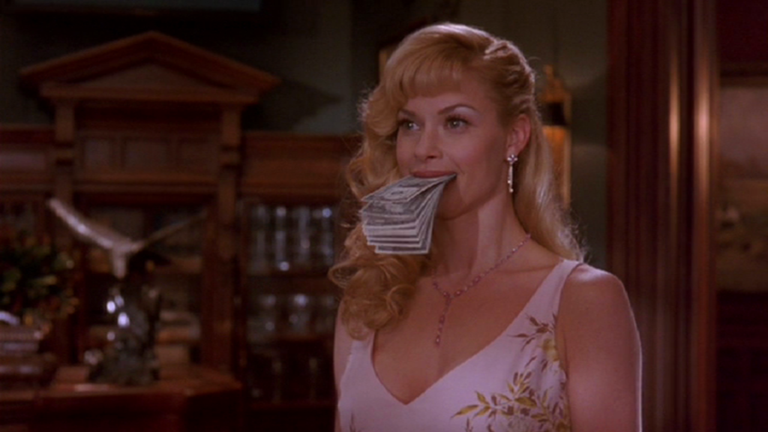 Finally, my main gripe is with the ending. So basically, Glenn Coco is foiled and the wives “snap out” of their robotic selves (I repeat: HOW?) and teach their husbands a lesson or something. This was a resolution more suited for an episode of the Honeymooners not this unapologetically self-aware satire. Plus, for a climax, it felt too rushed and of the “just wrap it up” variety.

All in all, The Stepford Wives is a fun movie that demands a grain of salt per viewing. It’s not really saying anything new but its delivery is pretty unique. With that said, its charm outweighs the clichés, so it’s worth a watch.

This movie is rated R for Real men marry robots.

You know when you’re at the grocery store and you’re two dollars short, so you have to put something back; but then the teller says “Don’t worry about it”? That’s basically my relationship with movies, a loving slippery slope that’s founded on dependency. Lara often writes about cinema on her blog Unleash The Jargon which she considers to be a vehicle to showcase her fandom towards Glenn Coco.

Cairo Station [1958] – The Struggles against Sexual Repression and Social Oppression