Martin Scorsese’s Casino (1995) is largely seen as the uncared-for crime masterpiece compared to the adulation bestowed upon the director’s 1990 underworld epic, Goodfellas (1990). In some ways, Casino covered the themes Scorsese dealt with Goodfellas: betrayal, hatred, love, greed, and violence. Both the films offered a complex and grim history of America’s organized crime. One set in the 1960s, and the other in the 70s. Moreover, the glittering decadence and lifestyle of excess prevalent in the criminal underworld served as the ideal microcosm of the American dream’s falsehoods.

Nevertheless, Goodfellas and Casino are also entirely different pictures: Casino dabbles more with film noir elements. The city of excess – Las Vegas – although is not bathed in chiaroscuro it provides the perfect context for the characters’ sordid realities, and Casino lacks the pitch-black humor of amorality abundantly found in Goodfellas. While Scorsese’s Mean Streets (1973) was strictly about street-level gangsterdom, Goodfellas tracks the rise of a gangster hailing from a blue-collar neighborhood. Casino, suffused in all its Technicolor richness, acutely chronicles the life of mobsters who have already made it big in the hierarchy of the criminal underworld, and who eventually gets undone, blindsided by the very glitzy components of their empire. 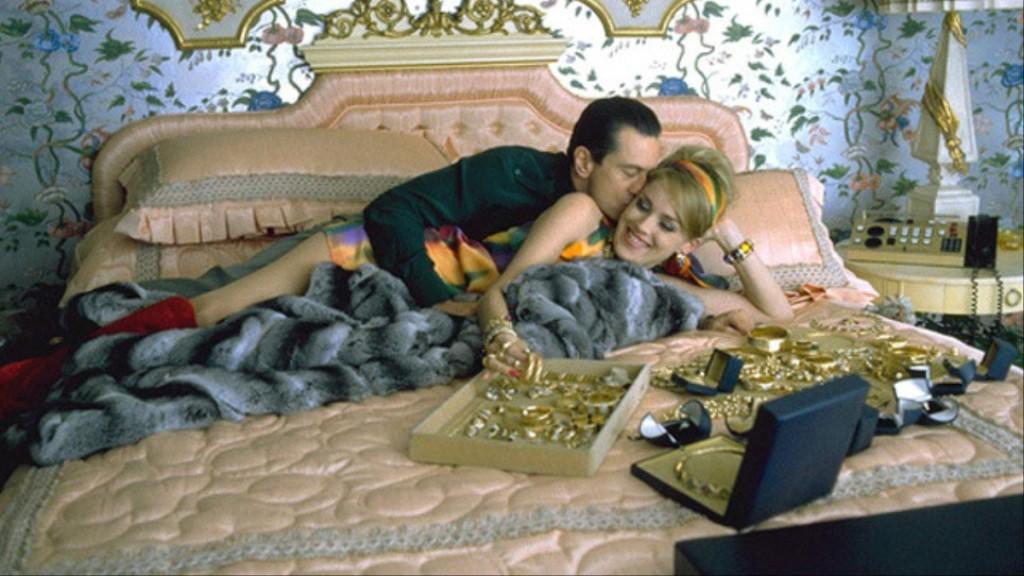 Casino’s noir elements are overtly discernible in the prologue sequence, where the protagonist Sam ‘Ace’ Rothstein (Robert De Niro) lights a cigarette and gets into his car. In the voiceover narration, he says the film’s now-famous opening lines: “When you love someone, you’ve got to trust them, there’s no other way. You’ve got to give them the key to everything that’s yours. Otherwise, what’s the point?” Seconds later, the car explodes and throws him into midair. It sets up the basic conflict at the core of Casino: relationships gone wrong. Not just Sam Rothstein’s relationship with his hustling, greedy wife, Ginger McKenna (Sharon Stone), but also his waning relationship with the elite circles of a decidedly ruthless mob. And unlike noir conventions, Scorsese allows the voice-over narration to present both the perspectives of its anti-hero and its icy-cold bad guy, Nicky Santoro (a very volatile Joe Pesci). Their unraveling unfolds like a Greek Tragedy, caught in the maelstrom of sex, drugs, money, and violence.

Related to Casino [1995] Review: Why Casino is better than Goodfellas?

Casino was co-written by Nicholas Pileggi, who adapted his own book Casino: Love and Honor in Las Vegas (Mr. Pileggi also wrote Goodfellas). It was based on the true story of Frank ‘Lefty’ Rosenthal, a Las Vegas casino manager who climbed the social ladder (in the 70s) through the far-reaching influence of American Midwest mob bosses. In the film, Sam Rothstein is a professional gambler and adept at operating a licensed casino joint. He is sent by Kansas City mobsters to manage the new Tangiers Casino in Las Vegas. On paper, the casino is being run by Philip Green (Kevin Pollak), who has a clean record, unlike Sam. The financing, however, comes from mob-controlled developments. Hence the dons of Kansas City, spear-headed by Remo Gaggi (Pasquale Cajano) wants Sam to call all the shots inside the casino, and to uproot those hindering the mob’s profitable venture. Every month, a portion of the casino’s profits are skimmed and sent to the bosses.

Sam, the cash cow, micro-manages the casino operation to perfection. He installs an elaborate surveillance system to keep their eyes focused on cheaters and high rollers. Sam explains that despite the illusion offered by the gambling joints, only the house wins. Always. All goes well until the bosses send a mad(e) man named Nicky Santoro – a childhood friend of Sam – to make sure that nobody bothers Sam. “I saw it as untouched. So I started getting everybody in line. Best of all, for the first time in my life, I figured out a way not to lose”, muses Nicky in a voice-over who begins to muscle his way around Vegas rather than just provide protection to Sam. Before long, Nicky begins to accumulate cash on his own, but he doesn’t forget to send the skimmed share of the casino’s profits to bosses. Nicky is a violently impulsive murderer. Yet he meticulously removes the traces of his ruthless acts by ensuring that a hole is dug in the middle of the desert before showing up with a package in the trunk. He clearly enjoys his role as a mob enforcer, stabbing a man to death with an ink pen, and latter putting a man’s head in a vice to extract crucial information.

Meanwhile, the 43-year-old Sam Rothstein falls in love with Ginger, a hustler, and a former high-priced call girl. He meets her at the gaming table, and a few months later Sam wants Ginger to be the only person he can trust in life. He coerces her to marry him, even though Ginger candidly declares that she’s not in love with him. Yet the huge mansion, fur coats, precious jewelry, high-flying lifestyle makes Ginger start a life with Sam and have his child.  Soon, Ginger finds herself trapped in the marriage and finds it hard to fall out of love with her former pimp, Lester Diamond (James Woods). Sam deals with the Lester problem in the only he knows: intimidation and violence. The self-absorbed Ginger turns to drinks and drugs and gradually becomes unstable. She neglects her kid, and plots to retrieve the jewels and money stashed in a bank safe-deposit box. When Sam refuses to let her go, Ginger tempts Nicky with sexual favors to help her get the money.

By this time, Sam and Nicky also face heat from the FBI. An animosity developed between Sam and a county commissioner (L.Q. Jones) puts Tangiers under the scrutiny of state’s gaming officials. A misinterpreted quote from an interview puts more pressure on Sam, whose name is now linked with Nicky. Moreover, when the court refuses to grant Sam a gaming license, he begins to deliver a harangue on the state officials, causing more embarrassment to the mob bosses. Sam even starts his own self-advertising television show and becomes a very visible figure. Nevertheless, the bosses put up with Sam’s hotheaded behavior since he still is their cash cow. But Nicky’s lucrative set of rackets and his adulterous affair with Ginger doesn’t go well with these old-school bosses. The money Nicky sends back home also slowly diminishes. Both Sam and Nicky’s actions also attract the attention of the FBI.

When the FBI begins to close-in on the Tangiers’ connection with the mob through their web of surveillance, the crime bosses solves the trouble by punishing the men who transgressed. A string of gruesome murders are committed, the most stomach-churning being the murder of Nicky and his younger brother Dominic. It was one of the most disturbing scenes of violence in American cinema with Nicky and his brother beaten to a bloody pulp before getting buried alive in a makeshift grave. Casino ends with Sam’s voiceover stating how the mobsters are now replaced by big corporations: “Las Vegas today is more like Disneyland than anything else. And while the kids play cardboard pirates, Mommy and Daddy drop the house payments and Junior’s college money on the poker slots”. The unbridled greed and seductive appeal of power finally reduces the empire to dust.

Writer/director Scorsese once again effortlessly combines entertainment and insight in his profound observation of the criminal underworld. He slowly works through the whole process of getting to understand the three primary characters (Sam, Nicky, and Ginger) whose fate seems to be strongly interconnected. Scorsese starts with an explosion and gradually dives into the inferno that led to these flames. Furthermore, the master and his long-time editor Thelma Schoonmaker have figured out the perfect, multi-layered internal structure to move around different dramatic threads without losing sight of the chief characters.

Overall, Casino (178 minutes) is a significant addition to Martin Scorsese’s body of work which restages his familiar, grim take on the corruption of the American dream with more panache and profundity.

Man of Steel (2013) Review: Credit Where Credit Is Due