Where are we heading to? Ask Aaron Sorkin: When The Social Network was released, 11 years ago, many people were describing it as the “Facebook movie”, something that I have always considered outrageously wrong. It was not about Facebook then and it is not about Facebook now, but that is the power of great stories and great storytellers, timelessness. It is an excellent quality for a piece of art, but it can be frightening at the same time.

Only a few years after Aaron Sorkin won the Academy Award for best adapted screenplay, the scandal over Facebook-Cambridge Analytica involvement in the 2016 election took over headlines around the globe, and lines like “As for any charges stemming from the breach of security, I believe I deserve some recognition from this board” seemed way too relevant. And speaking of politics, The West Wing has proven, more than one time, to be almost a fortune teller. Another quality of great storytellers is to understand, the same way Santayana understood, that those who cannot learn from history are doomed to repeat it. As was angelically asked by Tony Kushner: Are we doomed? Will the Past release us? Can we change? In time? Maybe Mr. Aaron Sorkin can answer these questions.

Related Read to Aaron Sorkin: The Trial of the Chicago 7 (2020): When Conservatism Destroys

Aaron Sorkin’s second directorial effort, The Trial of The Chicago 7, is about the tumultuous trial of 7 men, that were originally 8, accused of conspiracy and crossing state lines with the intention of inciting riots at the 1968 Democratic National Convention in Chicago; these protests, meant to be a pacific demonstration of dissatisfaction, were harshly repressed by the police force and ended up in a blood bath. Does it sound familiar?

The writer is known for his fast-paced dialogue, fueled by debate and exchange of great amount of information in a short period of time, yet, in this movie, is a single line that takes your breath away: “Can you breathe, Bobby?”. This is said during one of the most shocking scenes, while Robert George Seale (impeccably played by Yahya Abdul-Mateen II), co-founder of the Black Panther Party, is dragged out of court and bound and gagged. The similarities with the reality of nowadays are as astonishing as they are concerning and alarming, and suddenly, we are not watching it as mere observers of a time that does not belong to us anymore, but as horrified partakers of the present. Again, The Social Network is as much about Facebook as The trial of the Chicago 7 is about 1968. As said by the writer-director himself, after all the years the project remained in development limbo, this would be the right time to make the movie, since “it would be about right now”. And that is another quality of great storytellers: to know when to tell them. 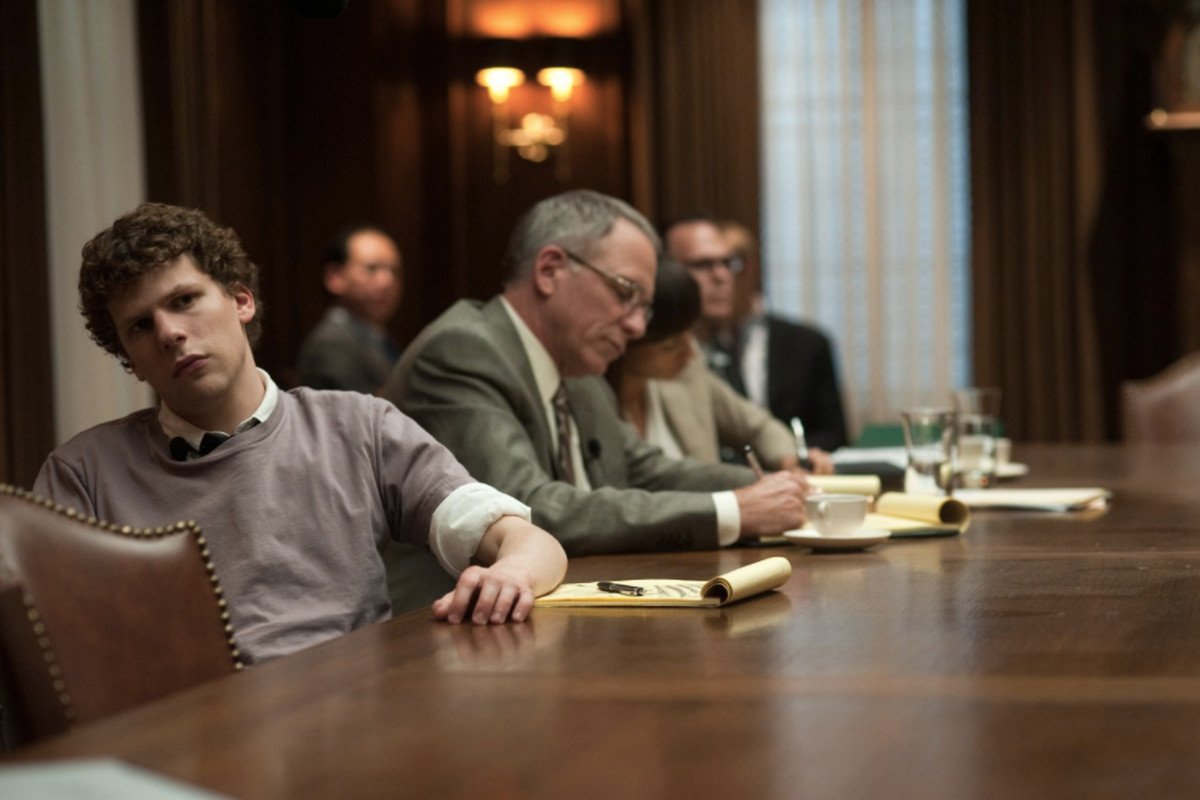 And nobody other than Sorkin could transcribe it to the big screen. Once again, the writer takes advantage of his clinic eye for detail to create a cohesive narrative and even surprise the viewers with a twist. What the Final Clubs were to The Social Network and William Santiago’s clothes were to A Few Good Men, in The Trial of The Chicago 7 is a matter of possessive pronouns and vague noun modifiers. The line “If blood is going to flow, let it flow all over the city” is the smoking gun of the storyline, appearing only near the end, but changing the whole understanding of the movie. And the characters. Abbie Hoffman (Sacha Baron Cohen, in the performance of his career) and Tom Hayden (Eddie Redmayne) are synthesis and antithesis, and up until this point could be seen as two opposing forces trying to turn the same wheel. But during a moment of confrontation, also straight out of the Sorkin Textbook, both men prove to have more layers than expected.

When asked in a Hollywood Reporter roundtable about the truthfulness a movie based on a real story has to the real world, Sorkin answered “It’s still a painting, not a photograph.” Yet, The Trial of the Chicago 7 is an ultrarealistic one, that feels so close to the current social and political climate. In this mix of Sorkin’s strengths, courtroom drama, the different perspectives of the same story, the hidden details, we are delighted by a masterclass in storytelling and petrified by how the world has not changed since the demonstrators were chanting “The whole world is watching” in 1968. What we can take from this complete circle is the understanding of the power of a story, and how much the generations to come have to know their own past to guarantee, or at least try, not to repeat the same mistakes.