The genius of Aaron Sorkin and David Fincher’s masterwork does not revel in it’s first viewing. The Social Network travels close to a light speed for you to absorb the intricacies and nuances of the motions. Even before you could settle in, the utterly fast paced and crisp dialogues would steal your focus and keeps you hanging onto screen. However, it has only been from the repeated viewings that the glory of Sorkin’s calculated screenplay has registered – the immaculate conversation setups, the parallel narrative wizardry and the juxtaposition of dialogues in past and present to create a wholesome scene. 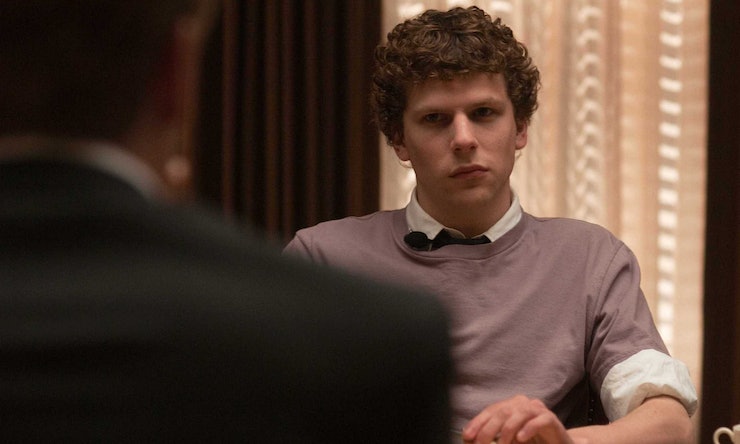 Mark Zuckerberg (played almost to a perfection by Jesse Eisenberg) needs to stand out from the population of all those students who got 1600’s in their SAT’s. He need to get into elite clubs of Harvard and as a retribution of being dumped by the girl he was dating, he codes The Facebook. Ethics lay astride, morals lie in the heap of ashes as along with his co-founder and future CFO Eduardo Saverin (Andrew Garfield), Zuckerberg creates history.

It’s interesting how Fincher has ventured into the rather dry litigation scenes in the present by constantly cutting and linking them to the past incidents. He might have twisted a few facts, fictionalized a few encounters in the name of cinematic freedom, but the essence remains intact and solid as rock, The Social Network has taken Facebook as a mere theme upon which it has defined an entire culture and a generation of ambitious population striving for recognizance.

Meticulously crafted throbbing pulses as background scores with soft undercurrent of piano pieces by Trent Reznor does magic to the electric editing. The deep focused framing and brilliantly lit night atmosphere sucks the attention into an estranged yet alluring world of young billionaires in the making. Fincher uniformly extracts dedicated performances from his entire cast but Jesse Eisenberg excels wonderfully as Mark Zuckerberg. He digs his nails deep into the psyche of an obsessed and closed individual clawing at stardom.

There is a cold, almost alienating addition that radiates from The Social Network. Behind all of it’s social statures, hue lit dorm rooms, raunchy stay-overs and booze driven nights, Aaron Sorkin has delved deeper into the labyrinths of friendships, betrayals and relationships in today’s digital age. He has peeled open the generation’s need to be accepted rather than being understood with the irony of a guy who is socially awkward ending up making billions after founding a social networking website.

By the end of it, a battered Zuckerberg says dejectedly to a novice Legal Assistant, “I’m not a bad guy”, and well, maybe he isn’t. There are no pure whites or blacks in this world and Fincher, with The Social Network, has explored and presented all the beautifully poisonous shades of gray.

Fleishman is in Trouble (Episode 7): Recap & Ending Explained – How does Libby React to Rachel’s Side of the Story?

Fleishman is in Trouble (Episode 5): Recap & Ending Explained – What does Vantablack represent for Toby & his children?