On the surface, Quentin Tarantino’s 1994 crime-drama Pulp Fiction may appear as the rockstar of films. It revolves around weird violence, hard drugs, funky guns, and upbeat music. But underneath its violent glory, the film is a criticism of American nihilism and the possibility of redemption.

Before delving into the discussion, the reader is given fair warning of spoilers as the article is going to touch upon several significant occurrences of the film.

Jules Winnfield and Vincent Vega (portrayed by Samuel L. Jackson and John Travolta, respectively) live in a nihilistic American culture, where the television, movie icons, and rockstars are the only teachers. The characters mention several pop cultural references, such as the labels used for Quarter Pound and Big Mac in Amsterdam, the pop band Flock of Seagulls, the American sitcom “Green Acres”, and several other meaningless American phenomenons. The absence of an objective framework of values and meaning makes the characters engage in pop cultural discussions, which are both pointless and temporary.

Here, the English language plays a crucial role in highlighting nihilism. For instance, Ringo (portrayed by Tim Roth) addresses the waitress as “garçon”, which actually means “boy”. Then Butch (portrayed by Bruce Willis) consistently corrects his girlfriend, Fabienne (portrayed by Maria de Medeiros), every time she refers to the “chopper” as a “motorcycle”. Also, Jules and Vincent find it amusing that in Amsterdam, Quarter Pound is called “Royale with Cheese” and Big Mac is “Le Big Mac”. The fact that all of these words are interchangeable, Tarantino raises the question of whether language holds any true meaning at all.

But Tarantino truly condemns American nihilism in its entirety when the ravishing taxi-driver asks Butch about the meaning of his name. He casually responds by saying, “I’m an American, honey. Our names don’t mean shit.” This powerful dialogue was the essence of Tarantino’s take on American nihilism. His association of the vibrant American culture with the absence of meaning in a name implies that beneath all the fuss, America is nothing but meaningless.

However, Pulp Fiction isn’t just about nihilism. The film’s integral focus is on redemption, which was well represented on Jules and Butch’s transformation. Both of the characters were instilled with a sense of purpose to break free from the shackles of the nihilistic American culture.

Butch the boxer had a cloud of shame hovering over him. While his ancestors were war heroes, he was living the life of a boxer who was paid to win or lose in boxing matches that were staged. His obsession over his heirloom, a gold watch, indicates how much he yearns for a life of honor. His weary eyes reflected that he wanted an escape from this meaningless life. 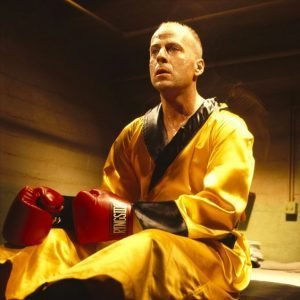 But Butch didn’t just want an escape. He wanted to live up to his ancestral honor. So when he had the option to choose from a hammer, a baseball bat, and a chainsaw, Butch opted for a samurai sword. The choice wasn’t arbitrary but a symbolic reference to the samurai way of life. The Samurai code of conduct, which is called Bushido, emphasizes honor, loyalty, courage, compassion, and frugality above everything else. Eventually, Butch saved his enemy, Marsellus, and thus, found purpose in life in the form of honor, courage, and most importantly, compassion.

Now, Jules, on the other hand, had no moral values like his partner-in-crime, Vincent. This was made more evident when he nonchalantly shoots Brett and his associates but not without reciting Ezekiel 25:17, which was lengthened and dramatized by Tarantino in order to create a petrifying ambiance. 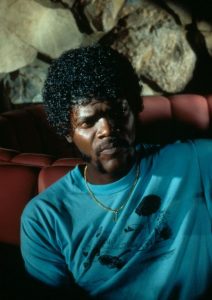 “The path of the righteous man is beset on all sides by the iniquities of the selfish and the tyranny of evil men. Blessed is he, who in the name of charity and good will, shepherds the weak through the valley of darkness, for he is truly his brother’s keeper and the finder of lost children.

And I will strike down upon thee with great vengeance and furious anger those who attempt to poison and destroy my brothers. And you will know my name is the Lord when I lay my vengeance upon thee.”

Initially, Jules deemed it cool to spout this particular biblical verse before executing someone. He never really pondered upon its true implications until he encountered ‘Divine Intervention’. When bullets that were fired at him and Vincent were completely missed, Jules interpreted the situation as an act of God signaling him to step into the path of righteousness. He decides to leave the life of crime and be the ‘shepherd’ instead to guide the ‘weak’ through the ‘valley of darkness’. He finally enacts the biblical passage by being merciful to Ringo in the coffee shop.

As for Vincent, he remained materialistic, selfish, and skeptical. He takes pleasure in extravagant foreign trips and exorbitant drugs. When Mia Wallace was on the verge of death due to a drug overdose, Vincent was anxious about his own life rather than Mia’s because she was his boss, Marsellus’ wife. And what Jules perceived as a ‘Divine Intervention’, Vincent stated it as just ‘luck’. He even goes on to calling Jules’ decision to leave the mob as ‘foolish’. But Vincent’s ultimate demise in the toilet represents Tarantino’s perspective on the negative outcomes of sticking to a nihilistic contemporary America.