Home»Reviews»Newton [2017]: An Exploration of Grey Spaces in the Sphere of ‘Duty’
Reviews

Newton [2017]: An Exploration of Grey Spaces in the Sphere of ‘Duty’

Amit V. Masurkar’s dark comedy is as potent and topical as it can get in India as it lives in nightmares of its past. There is will in India, and enough idealism to fill pages of manifestos and books; but thanks to the consequences of its postcolonial past, along with the pressure of living up to its name of being the world’s largest democracy, things rarely get done around here.

The film is an exploration of this phase; something I would call the “grey space of helplessness”; this is something every single one of us has been in: a futile limbo where we can’t fulfil our ideals without getting our hands dirty.

It is set in the forest, from where there is no escape; a stifling, serpentine labyrinth that traps with its charm and at the same time stands for the mentality of the people walking the roads: stagnant, stubborn and unchanging. The music is minimal and the song “Panchhi ud gaya” too, reiterates the same state of ‘almost’ that the two characters in the film face. In a way, the despondency of these characters at the end of the film, despite their valiant efforts, stands for what India’s condition has been for a while.

The eponymous character, Newton Kumar (Rajkummar Rao) is honest to a flaw. Worse, he is proud of his honesty. It is this flaw in character that is put to the test in the course of the film’s narrative. This “flaw” is not only limited to him being honest at all times, he is honest to the degree of an obsession. He endures physical injuries just to make sure that the commission is available till the last second for voting. Like his namesake, who learnt a lesson from something as simple as an apple falling on his head, Newton Kumar learns a lasting lesson during the course of one day.

At the same time, the so-called antagonist Aatma Singh (Pankaj Tripathi) is flawed too; a battle-hardened soldier, who watches jawans under him dying gruesome deaths at the hands of the Maoist rebels in the Dandakaranya, the forest where people are punished. His battalion is ill-equipped and has to fight on an unknown forested territory.

Also Read: Newton [2017]: The Story of A Forgotten Community

Both of these characters which form the polemic of the film, along with the other two important characters, Loknath and Malko, inhabit this “grey space of helplessness”. Each of them has a set of ideals they live by; for Newton it is unflinching honesty, while for Aatma Singh it is the motto he has been taught as a soldier, that safety is first.

At the same time, both have opposite and important duties to fulfil. Newton has to make sure that an election is organised at Kondanar, Chhattisgarh. There are 76 registered voters who all deserve a chance to have a say in their political future and they must have it. Aatma Singh has to look after his battalion. Eventually, as a result of the clash between these two duty-action pairs, the final result is a stalemate, a state of an “almost”. There are lessons that both characters come out having learnt.

Ironically Newton, the high-and-mighty idealistic officer cuts Anjali Patil’s Malko short whenever she tries to explain how her people, the Gonds abide by their ancient laws and have never even heard the names of the candidates before that very day. In this way, he becomes very similar to his foil, Aatma, by giving in to the same prejudice. In a way, he fails to understand the fact that for the people who live so meagrely, high-flying words like voting and democracy mean close to nothing to them. Aatma Singh and his battalion of khaki-clad goons (at least to the Gonds) demonstrate the same dismissal- shutting the native up in the name of a language barrier/ simple prejudice.

So all in all, through the course of one day, both the characters, instead of reaching a fruitful cooperation, end up oppressing the Gonds in their own way, benign or malign. Malko’s dialogue from the film, when asked if she too was a “nirashavadi” (negative/pessimistic) sums up the essence of the film, “Nahi Sir, main Adivaasi hoon”; (No Sir, I am just a native). The oppression of the native in the name of language and in the name of skin colour will not stop until the “educated” national learns to empathise with their distresses.

Till then every native tribal will murmur, if not shout “koi badlao nahi ayega” while standing in queue for an election. However (being a comedy) there is growth, at least for Newton Kumar at the end of the film. Taking Sanjay Mishra’s advice he understands that honesty requires no reward. Despite what the climax of the film had to offer to him, he arrives punctually every day and takes a break only when its time as his obsession remains. But even in the last scene, when Malko visits him at work to catch up, he makes her wait for him to finish work, as he had five minutes to go till his office hours get over to buy her tea. 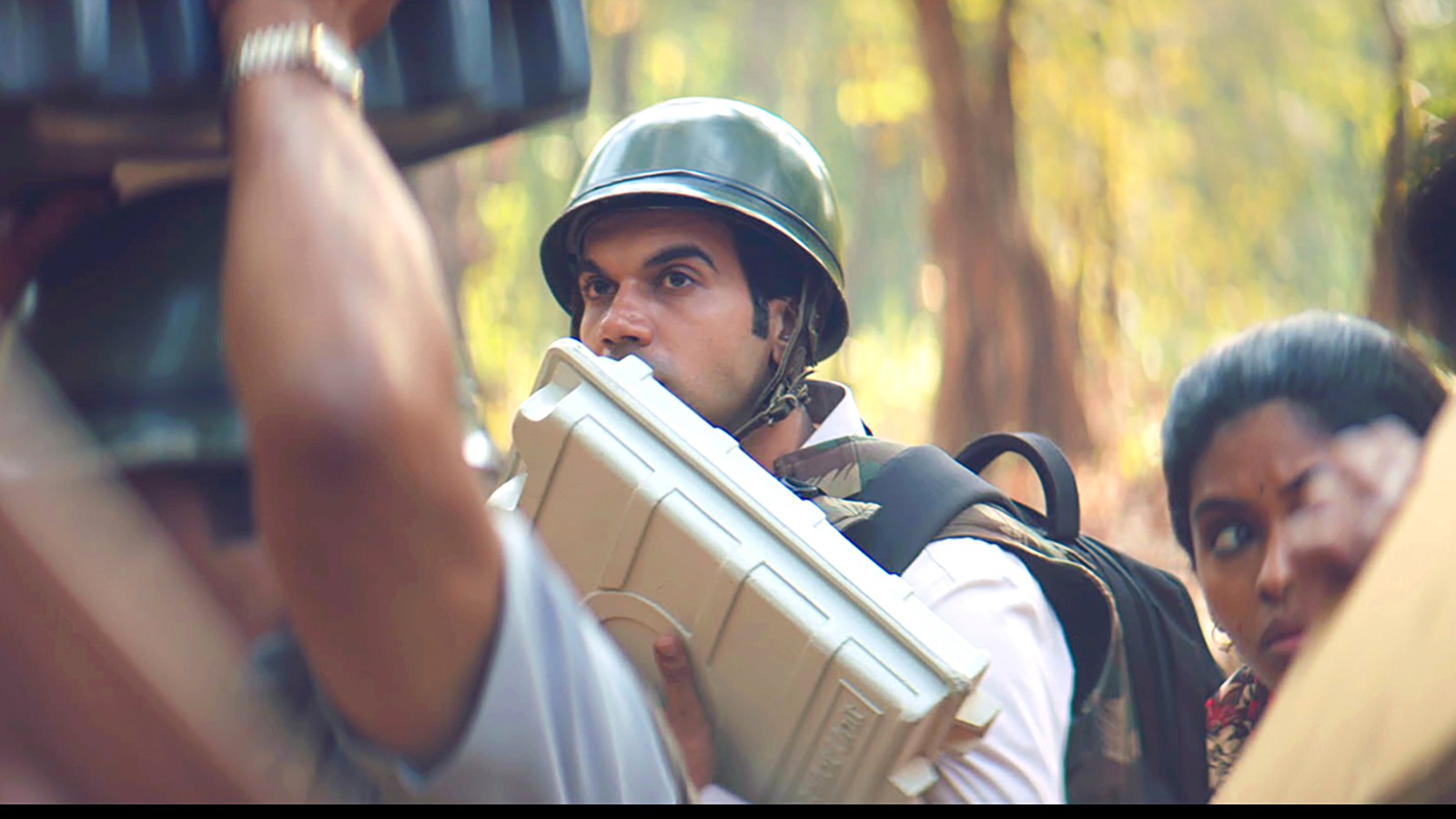 The most striking part of the film is however the fact that the native, who has been dubbed silent on account of linguistic barriers throughout history, speaks through Malko, and taps the ‘Indian’ on the shoulder if not slap him for never wanting to acknowledge his/her voice. Masurkar and Tewari make sure the film does not jolt the audience too much while waking them up. The end credits theme, sung by Raghubir Yadav, too teaches the audience a lesson: “Chal tu apna kaam kar” despite what’s going on.

Joe Lazauskas, expert on storytelling, says a great story depends on a certain degree of novelty along with an optimum degree of relatability. Masurkar’s film has all the trappings of a “great story” if it is defined on the basis of this rubric, talking about already discussed issues like racial tension and the dilemma of the educated while at the same time being novel enough to make the educated learn a valuable lesson despite ultimate failure.

Summing up, one is reminded of Arthur Miller, who said how the common man’s greatest tragedy lay in his wrong appraisal of himself: Newton Kumar stands for the same tragic Indian everyman who is taught to change himself to please his superiors every day. By refusing to kow-tow, he succeeds and lives with hope to grow, with his country in extension.

Newton [2017]: An Exploration of Grey Spaces in the Sphere of ‘Duty’