“A well-orchestrated nightmare that keeps you on edge until the very end.”
-Desson Thomson on The Insider.

At the running length of 157 mins, Michael Mann has engineered one of the flawless films that exponentially raise the tension with every passing second. Each frame is impeccably placed; every cut seems to be a masterstroke; every character seems to have born to play that respective part. Like, Wigand’s attorney bawling on other attorney who constantly interrupts him during questioning to Wigand in Kentucky Court. It may seem trivial when considered the entire film as an entity, but at that moment, you can’t take away the credit that those two characters gave one hell of a performance. Mann and Eric Roth have meticulously worked on the screenplay of the film which is quite evident from the gripping narrative flow throughout. Even the scenes that feel like filler, like when Wigand is dining with his family and he rushes to buy Soya sauce, it creates substantial amount of uneasiness, and tension of possible impending unfortunate event.

‘The Insider’ is extremely suspenseful, with each second it creates claustrophobia that sucks you inside the life of two morally good characters who are fighting with themselves, with their own problems, and arguing with their own people, and finally fighting with Tobacco companies. Mann has successfully designed each thread from the life of Wigand and Bergman, and woven it aesthetically that looks like a visual poetry but painted with looming tension, despair life, and hopeless relatives & friends. Thanks to unsuccessful but Oscar worthy performance of Al Pacino & Russell Crowe, ‘The Insider’ is Mann’s most matured work, and certainly the masterpiece. And finally, fuck you American Beauty.

Great, great film this one is. I have always been a fan of Mann and the films he has made, and has to say this is by far one of his best I have seen. Journalism, as a profession, always excites me and films on investigating journalism, if they are done good, are the kind of films I really dig. Most recently, Spotlight has done that. Watching this film, reminded me of ‘Spotlight’ as well. This one, true to Mann’s style, is more dramatic in nature, which it confesses in the end. I somehow felt this could have been even a better film if they had taken the ‘Spotlight’ approach. But even then, it is brilliant. Especially in the first half, it is terrific, mostly due to Russell Crowe’s impeccable performance. The camerawork is extremely smart, brewing the tension throughout the movie. The second half could have been done a bit better. The editing should have been done with more care. But then, in the last half hour of it, Pacino kills it. His scene with the CBS news boss reminded me of the famous Spotlight scene, starring Ruffalo and Keaton. Overall, a fantastic watch.

I loved Al Pacino’s entry, and at first I thought he’s the lead but as the movie progressed and the kind of battles Russell crowe’s character had to face, he just becomes the agent of change. The change that even with all the paranoia and doubts Crowe decides to give the interview jeopardizing his and his family’s well being. Plummer’s role was striking too adamant boss who’s an amazing reporter as well. Mann’s genius lies in the stylish shots complimented with haunting music. Take the first scene for example, he shots from behind the bondage Al Pacino is tied in, giving too little info still telling from whose eyes you’ll get to look n then subtly changing the camera n giving us the whole picture.

The Insider uses it’s pulsating background score to optimum effect. For example, the intro scene almost reminded me of Sicario. Mann had complete control over his characters from the start. He builds them up slowly, pointing out the similarities and dissimilarities between the two main protagonists, the two children household, the loving and scared wives. I simply loved the communication they have over the fax machine. Both Pacino and Crowe were great but I could feel what Crowe was feeling. His paranoia, his disregard and scared face and his anger all gelled up together quite brilliantly. There was a part where a character says that these are ordinary people under extraordinary circumstance. I don’t know if it was intentional but Mann’s camera gets out of focus a couple of times when he takes up to the background. Images of moving things and random (ordinary) people. Also, when Crowe’s character looks out of the window and sees a car burning. I almost had a lump in my throat as it reminded me of Pacino’s dialogue “I don’t burn people.” 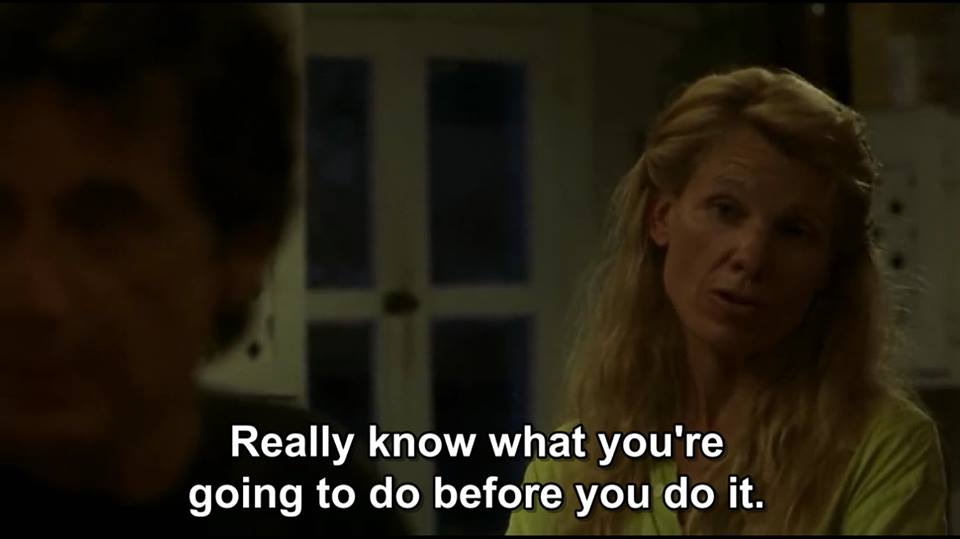 Before this, the only works of Mann that I have watched is Miami Vice and Heat . While Miami Vice is only Okay-ish, Heat has its moments mostly because of the top Pacino-De Niro duo. This lady in the picture kept her mum all through the movie and has played quite an insignificant role except for this one line where she sums up the entire concept of the movie. Just like her, the lawyer who shuts up the attorney was quite insignificant until he yells at the defense lawyer to “wipe the smirk off his face”. The Insider focused on such minor points and that is what makes it an interesting watch.

Wigand thought about what he was going to do but never knew the outcome of his actions and it ultimately lead to separation from his wife and children the blame for which indirectly has to be shared by Bergman (Pacino). The screenplay effortlessly shifts the weight from Crowe to Pacino but Crowe had an upper hand on it right from the beginning and he plays his part with much grace. Bergman rightly describes Wigand and his family as “Ordinary people under extraordinary pressure” while himself prioritizing his work as a journalist and moral responsibilities of his profession above everything else. It might have been that he organized those death threats to manipulate Wigand’s decision to go out in public and expose Brown & Williamson instead of giving up and signing the agreement that his ex-employers want. This movie shows how media, which is the fourth pillar of democracy, is a tool of the wealthy, just like the other three and exposing their misconducts doesn’t come at an easy price.

Vengeance Is Mine [1979]: An Ominous Remainder of the Darkest Corners of Human Mind