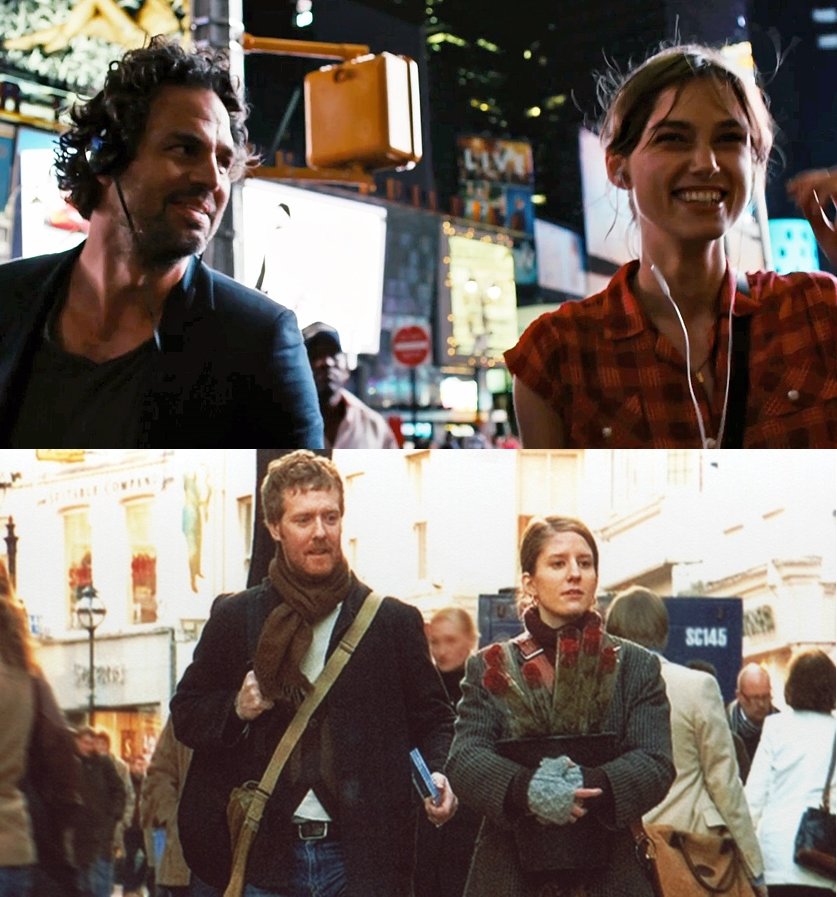 Being a John Cassavetes fan John Carney believes that films don’t need a big crew and grandeur production qualities, rather he believes that a film can be made with only two characters walking down a road humming their favorite tunes and talking their mutual love for Music. When you look at both the films, you find a striking similarity. Both the films have two characters – A guy and A girl, ironically named so in his first feature, who are lost in more ways than one. Both of them are not stories about love, but Love is a driving force that pulls them out of the mundane and lonely life, bonding and befriending to create something sensationally original and oh-so-pleasing to the eardrums.

In the sensational 2007 film Once, Carney investigates the life of Guy (Glen Hansard), a struggling street musician who also fixes up vacuum cleaners at his dad’s shop. It is during the performance of one of his songs that he meets the Girl (Marketa Irglova),  who is a pianist without a piano. In 2014’s Begin Again he brings to the screen the life of Dan (Mark Ruffalo), a disgraced record-label executive who has been recently fired from his own company. As he drowns himself in alcohol, he stumbles onto Gretta (Keira Knightley), singing one of her songs in East Village. He is captivated by her song and instantly offers her to sing for him as he produces.

Now, both the films are about people who are lost in some way or the other. Love is essentially a very strong factor in all four cases. While Guy still writes and sings his heart out for his ex-girlfriend, the Girl is a Czech immigrant who is married and has a child, yet lives far away from her husband. Dan lives alone but is still friends with his ex-wife and has a daughter who he loves yet can’t appreciate completely. Gretta, on the other hand, has had a recent break-up with Dave (Adam Levine), who is a high-school sweetheart and a very successful musician. All these people have a common link between them. Music acts as a catalyst in their chemistry and they not only connect with each other over music but they, quite evidently, romanticise it.

Jon Carney’s films work mostly because he creates wonderful and believable chemistry between his two lead characters. He takes you into their life, introduces you to their raw emotions but never begs you to feel bad for them. His films resonated with a much smaller audience in a much bigger way. For example: Consider the very first scene in Once, where the Guy is on the streets singing one of his cover songs and someone picks up his earning and runs away. While he chases him down and catches him, he eventually sympathises with him instead of getting overly angry. The true charm of this scene lies in the fact that his protagonist had to face two situations that he completely loathes, first being him having to sing a cover song instead of his original compositions and the other being the random person stealing his money; and yet he keeps himself calm. Similarly, in Begin Again, we see a drunk Dan running down his imagination as the instruments dance to the alcohol in his head. Revealing the fact that, music is the only language he understands.

Once and Begin Again are unconventional films because they don’t get into the usual genre trappings. It does show love blooming between its characters but the love is so pure that it does not need a lens or proof to be judged. The films agree to the reality that not many people that we meet proceed to the happily ever afters. A lot of relationships are an attempt to get somewhere while ending up on separate opposite paths thereafter. Which is not entirely a bad thing. The sentiments that both the female characters bring to the screen is incredible and at times exhausting. The girl, in particular, has been portrayed as someone who would blankly decline an offer to stay the night not because she feels unsafe but because she still clings on to something bigger. Gretta on the other hand, pours her emotions into the songs she writes, all the way leading up to her redemption and the slang drenched angst that follows with Dave.

Both the films are beautiful to look at, even though Once is a micro-budget film shot entirely with hand-held camera. Carney makes Dublin and New York act like those pauses between musical notes. Ones that don’t usually matter, but are a dire necessity to complete a song. Similarly, the soundtrack for both the films is phenomenal. They not only score high with their melody but they also fit right into the premise of the films. The first time Guy plays the Oscar-winning track “Falling Slowly” it sounds like a swan song, but later it gets into your head and feels like an anthem for the underdogs. The magical Lost Stars, on the other hand, brings hope to all those people who don’t accept that being in the dark doesn’t necessarily mean the end of the road.

When you look at the narrative of both the films you don’t really find the ups and downs. They are the usual crowd-pleasers. But Carney sprinkles his films with incredible maturity and freshness. They play beautifully with your heart-strings plucking at them; one note at a time.