When comparing Better Call Saul favorably with Breaking Bad, director Guillermo Del Toro said: “Less plot, more story. The plot is rhythm, the story is melody”.  The entire success and genius behind the writing of Better Call Saul is achieved by focusing on characters over plot and creating tension through it. Vicky Jones’ “Run” is inherently quite similar to this very mode of storytelling.

After the trailer released, a big question that loomed at large was how will this premise sustain over seven episodes (and future seasons)? Doubts regarding this were fading away during the first few episodes, but later the cracks started to show. The first episode opens with Ruby Richardson (Merritt Wever) in her car, lost in her mind almost contemplative. She has a mundane conversation about her husband which was the first sign of her unhappiness. It is achieved purely through performance and some clever writing which feeds this information through a day-to-day conversation. Following this, she gets a text from Billy that says “RUN”. She texts him back the same, and this is where the story truly begins.

Also, Related to Run – Fleabag (Season 2) Review – Phoebe’s brainchild is a modern-day tragicomedy which gets edgier in the new season

Vicky Jones wastes no time in getting into the meat of this story. As Ruby reaches the Grand Central Terminal she finds Billy (Domhnall Gleeson) on the train, talking to someone. A glimpse of a phone call, which gives the audience an idea that there is someone in his life. They settle down in their seats as Ruby’s adrenaline starts to wear off. This is the last chance for her to go back but she stays. Merritt’s performance here which requires no dialogue really speaks volumes of uncertainty. Ruby and Billy don’t jump into a conversation about themselves but play a small game with a co-passenger. Ruby and Billy don’t even say hi to each other until two minutes after they start talking. This very first act of the pilot is constructed beautifully keeping in mind that they’re meeting after a long time and are risking their current lives. Precisely why Billy first makes conversation with Ruby through the passenger and then directly. 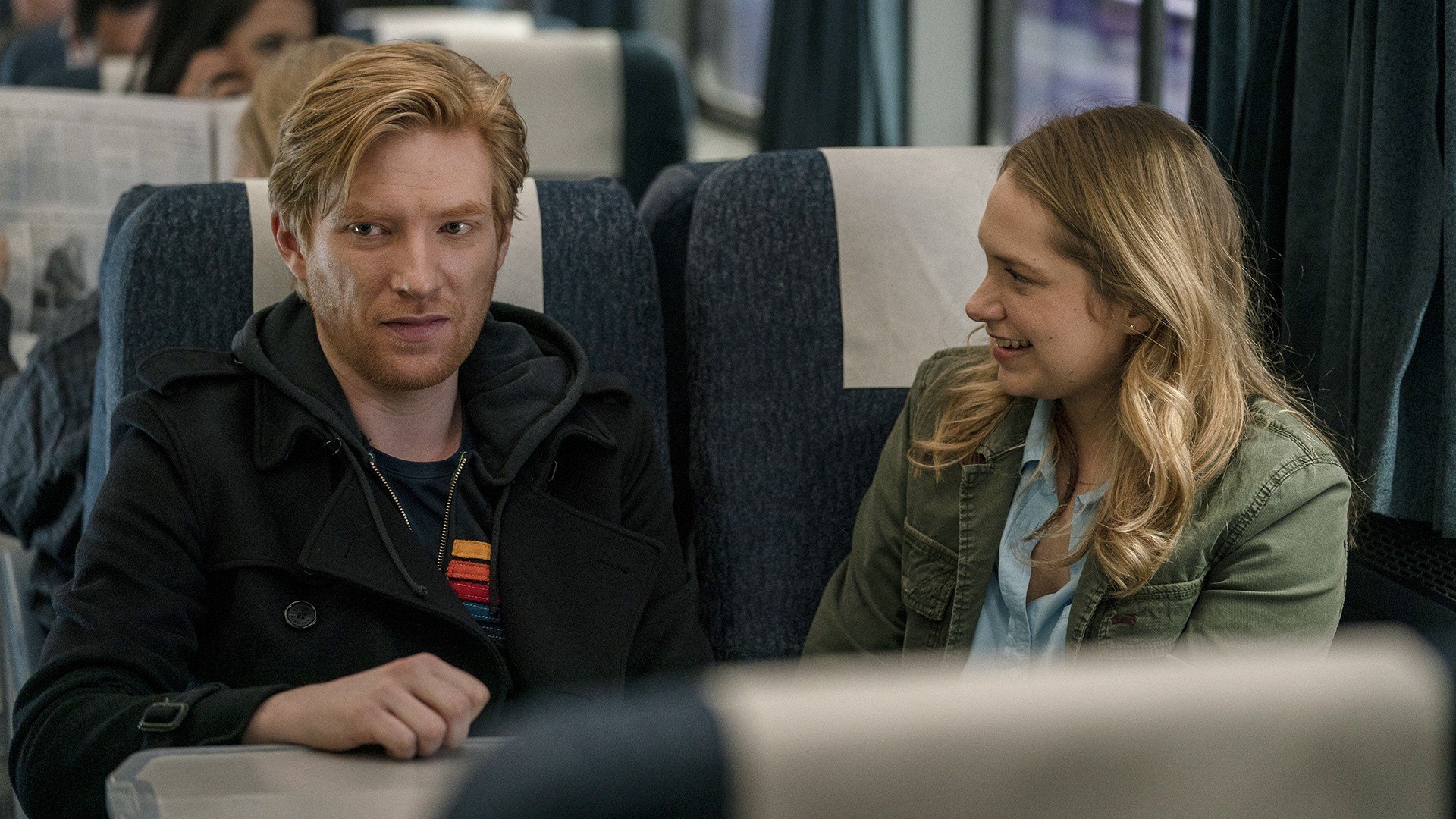 One of the biggest strengths of writing comes in the form of textured characters with real personalities. The razor-sharp dialogue works wonders to bring out honest characters. You buy into their humor and wit. Billy is established as the funnier one as Ruby herself later claims that the best she can do is ‘confused half-jokes’. The sublime writing of the two leads is an authentic representation of ourselves rather than the usually seen smarter/enhanced versions. The tension between them stems from the situation they’ve created by meeting on the train. They share a tender moment in the roomette where they simply sit closely, looking towards each other, absorbing each other’s presence. A presence they haven’t felt for 15 years. An embodiment of the famous saying “show, don’t tell” done to near perfection. Vicky Jones makes sure to check every possible nuance that there possibly is between two lovers who’ve rekindled.

The final bits of the pilot touches upon a very important question put forth by Ruby- “Why did you text me?” A question that can make or break their time together. His reply is barely satisfactory as he was ‘hammered’ when he texted her. But she was the only person he could think about. The last scene of the pilot encapsulates the direction the show will take in the coming episodes. Billy breaks the handle of the lavatory thinking Ruby left the train and then (by accident) gets a peek at the picture of her family on her phone. The dramatic irony here is a gut punch and lands the perfect cliffhanger. However, something about this last scene felt different from the rest of the episode as it relied more on the drama than the people themselves.

Similar to Run (Season 1) – The Half of It [2020] Netflix Review: A charming and breezy coming-of-age love triangle

The following two episodes follow a similar pattern in terms of causing tension between the leads through their own thinking and questions. Aptly titled, “Kiss” and “F**k”, that is exactly what happens. Some clever writing finds different ways to keep things realistic and provides viewers with small yet real characters – Derek (Saamer Usmani) who beautifully plays along with Ruby as she tries to make Billy jealous. On the other hand, Cherise (Patrice Goodman) who does the exact opposite and doesn’t abide by what Billy wants. Ruby and Billy’s different lives are presented organically. Ruby confesses to Derek about sex, “It’s been so long, I don’t even have the imagination to make it up”. This undertone conquers her previously seen desperation to get in bed with Billy. While Billy realizes he has to end things with Fiona. 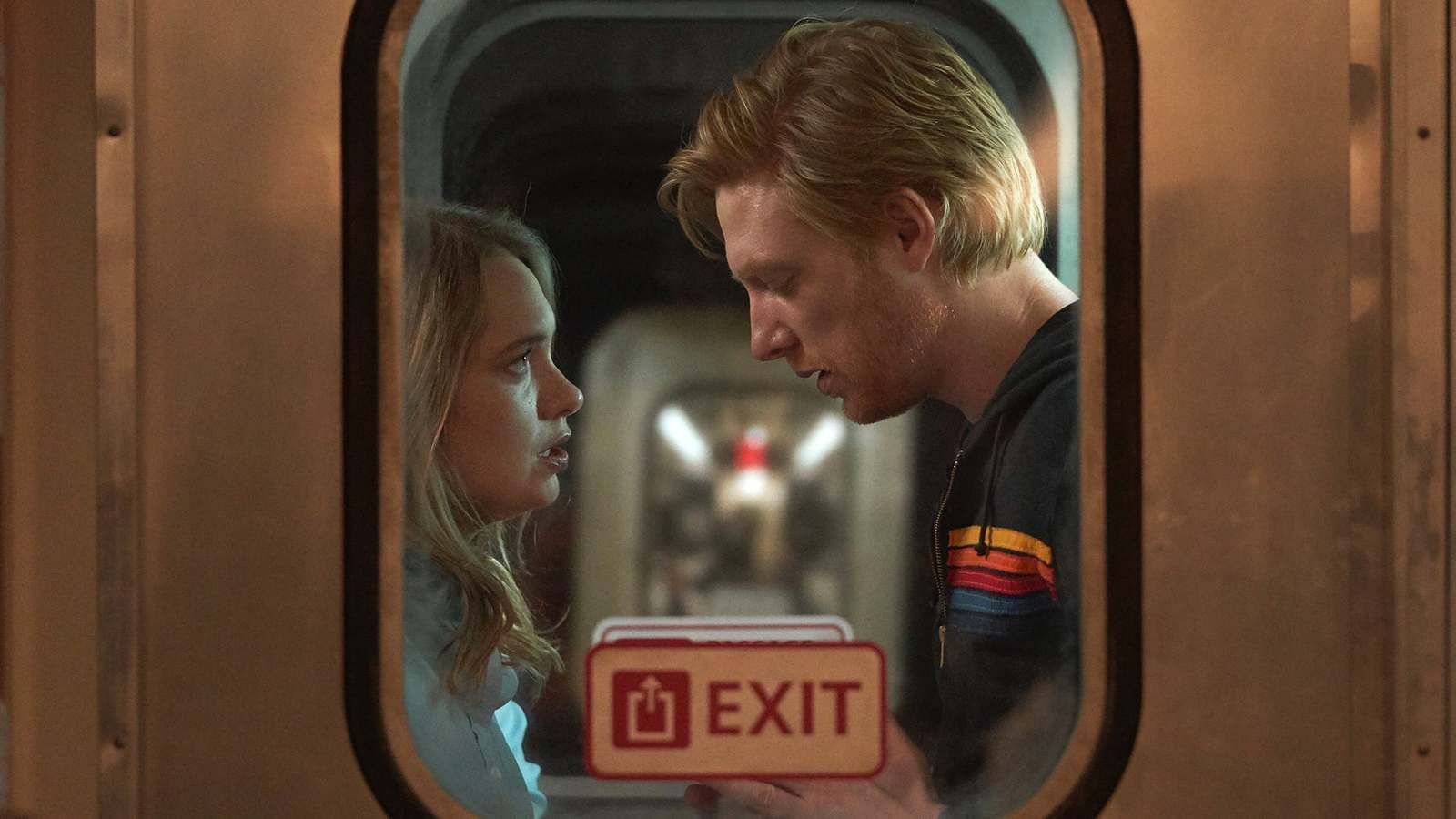 By episode 3 of Run (Season 1), we learn who Fiona (Archie Panjabi) is as she manipulates Ruby into giving her information about Laurence. This is where things start to derail. Fiona records Billy and Ruby having sex by sliding her phone under the door. The fundamental tension driven through our central characters is ruined here as it shifts to a secondary character. The story engine of the show is plot-driven instead of the main story itself. Ruby and Billy jump off the train to chase Fiona who later dies accidentally during a scuffle. The couple is now struggling to find a way out of this misfortune. In the midst of this, they hitch a ride from Laurel (Phoebe Waller-Bridge), an eccentric taxidermist who’ll be our couple’s bane. Her subplot with the police detective, Babe Cloud (Tamara Podemski) feels half-baked as there isn’t enough time to engage in their odd-ball chemistry.

The intensity of the situation starts to take precedence over the characters’ internal dilemmas. The sixth episode does bring us back to more refined themes as Merritt delivers a strong and heartfelt monologue on motherhood. In the final episode, Billy turns candid with some of the harsh questions about the reality of them actually ending up together. But yet again, conveniently Ruby comes across the video where Billy’s true reason to text her is revealed. The dramatic irony doesn’t deliver the same way as it did in the first episode as the viewer isn’t as invested due to the bizarre story twists that had preceded this. She ends up going back to the life she hates because of the video she came across, a rather convenient plot point. The writing shied away from the tougher question of whether they can be together after 15 years apart. The fact that they made this pact always meant they’ll love each other forever and that is proved in the finale when they both accept that. But the sole reason why they don’t end up together isn’t satisfying.

Also, Read – The 15 Best Hotstar TV Shows that are worth your time

Even though the writing derails a little focusing on the plot, nothing can take away from how well written the characters are and the way humor is instigated. Billy and Ruby are flawed and there is no looking away from it. You’ll always care about them and what they have because of the realistic foundation of their characters. In episode 3, Ruby brings up the fact that she doesn’t have arguments with Laurence as Billy reminds her about their own fights earlier. The subtext is weaved wonderfully hinting that arguments among people don’t necessarily mean they can’t be together. She clearly loves Billy more and probably fought a lot more with him because she cared a lot more. It is a conundrum that all of us deal with.

Their persona is smartly built as most of the jokes are actual jokes that characters crack with each other. These aren’t the ones that the characters simply deliver to make audiences laugh. In episode 2, Ruby is ready to have sex and in a sultry fashion she says, “Come get me”. Billy claims he is upset that she didn’t have his kids to which she responds “I don’t want ginger kids”. The series is filled with many such effective one-liners that feel visceral. They’re also very fruitful during more difficult conversations. In the final episode, after Ruby tells him she is going to leave Laurence, Billy jokes about how ‘they barely know each other’. This helps to shift between conversations and moments freely. 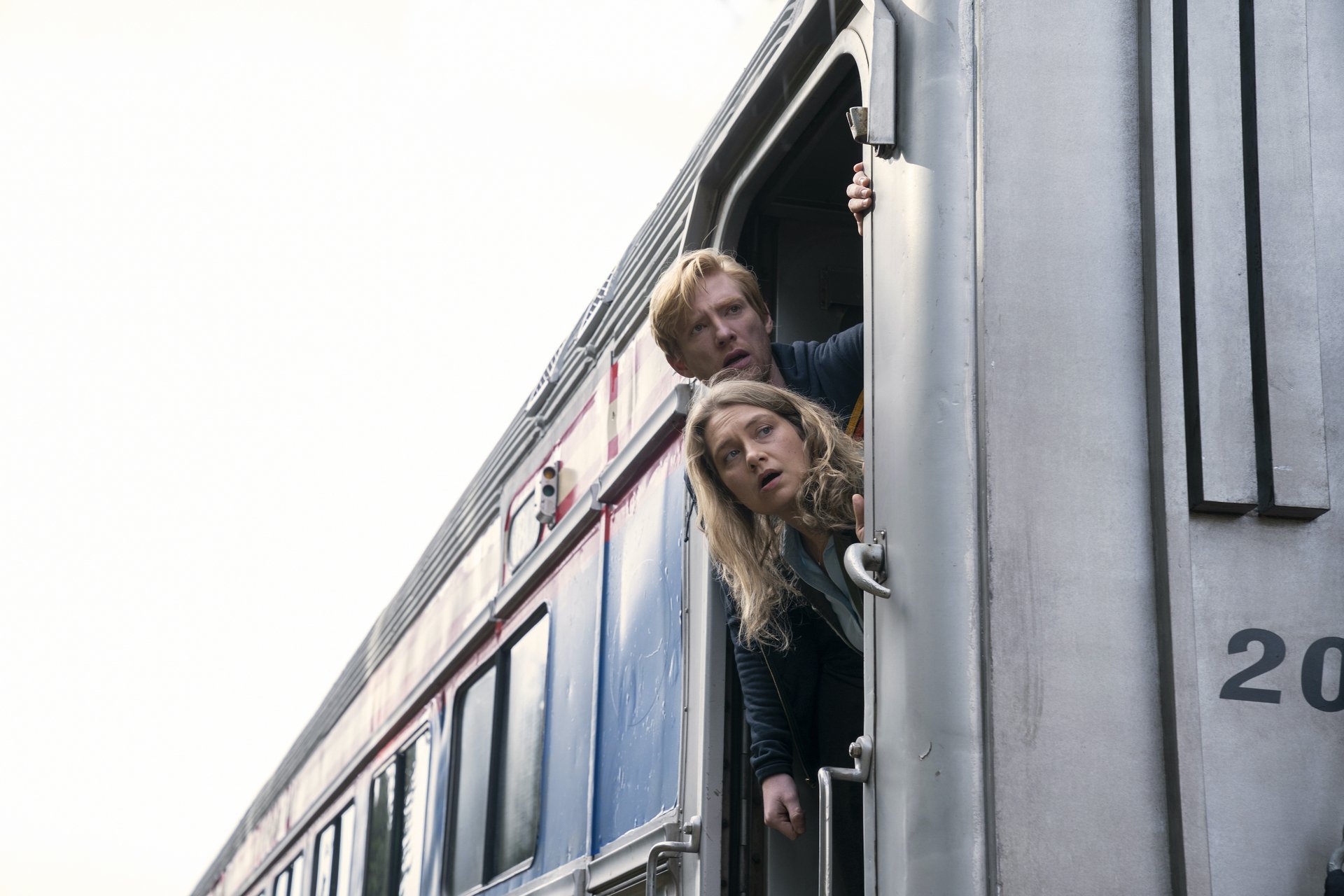 Throughout the series, there are many subtle (and some not-so-subtle) digs at patriarchy and the ignorance of men. In the very first scene, Ruby is asked to go back home to receive a delivery. Later in the episode, Laurence (Rich Sommer) is annoyed that she went away as he’ll have to take care of his kids and miss tennis on the weekend. He even struggles to take care of their children in the following episodes. In episode 2, Billy jokingly mentions, “men dominate the upper echelons of the workforce” but later in the same episode she lashes out (after HE refuses sex) saying, “All she needs is a level-headed man to gently suggest her to get some fu***** rest.” All these hints over the episodes are tied together in her monologue in episode 6 when she accepts how much she has lost in trying to be a mother and a wife. She loves her children but she can’t be herself with them. A layered conflict. She had to “hand over her life” to make this family. She states “they (her children) have no idea what they have taken away from me” but she is also aware that her “unhappiness will haunt them”.

This entire monologue comes after Billy argues that it is his time to ‘freak out’ because of Fiona’s death and his career being in jeopardy. What he didn’t realize until that moment was how much more is at stake for Ruby. Both internally as a person and for her family. She had to attest to her freaking out when Billy mentioned going to the police as he was ignorant about the magnitude of her problems. Probably one of the reasons why this episode is titled, “Tell”.

It would be criminal not to talk about the two leads. Merritt Wever and Domhnall Gleeson are made for each other. We’re used to seeing characters fall in love and be a part of their journey. The challenge for both the actors was to make the viewers believe they’re former lovers. And they achieve this with the utmost sincerity. Be it delivering jokes in serious moments or being genuine with their significant other, there is not a single moment where their performance can be held in contempt. Their eyes, always brimming with emotion, draw the viewers into their grief, confusion, and happiness. Merritt has a little more to play with given her situation with the family and portrays a more complex character. Ruby’s frustration is apparent as Merritt gradually recoils into accepting how much she gave up. Be it shouting her lungs out in the latter half or hiding her failures, Merritt embodies Ruby. Domhnall creates a conflicted man trying to understand himself as well as hoping for the best with Merritt. His one-liners are paced perfectly every time and he moves effortlessly between humor and compassion. Their chemistry is the strongest aspect of the series and some of the finest ever seen on TV.

Overall, Run (Season 1) is entertaining but not completely satisfying. It manages to go past the usual rom-com tropes and brings about fresher conflicts. I’d come back for Ruby and Billy as they’re imperfect yet rich characters.

Run (Season 1) is streaming on Disney+Hotstar.

The 10 Most Unsettling Movies You'll Ever See