Inherently, all Anurag Kashyap characters have a grey side. They look and act in ways that make for an all-inclusive party of darkly comical hounds who are always on the lookout for something better. In his newest Netflix presentation ‘Choked (2020)‘ [Stylized as Choked: Paisa Bolta Hai], Kashyap carefully constructs the lives of middle-class Mumbai people.

Living in aligned flats where you could listen to the house above succumbing to a crumbling marriage, these characters have a hand to mouth existence. To make things worse, Sarita (Saiyami Kher) – a Government Bank employee has to deal with a good-for-nothing husband who can’t even get the kitchen sink fixed. More so, an incident in the past keeps coming back to haunt her – making this livid experience a living hell for her.

Her husband Sushant (Roshan Mathews) is a debt-ridden, ex-musician who prefers playing candy-crush on his phone and hanging out with random people from the society playing a game of carrom before hitting the sack. He isn’t even responsible enough to keep his towel in place or switch the lights off when he is done. He doesn’t listen or is too numbskulled to understand Sarita’s complaints about why they are living a soul-less existence.

Of course, her choking on the stage of a reality show has punctuated the ‘happy’ and ‘sad’ phase of their marriage but it’s also bigger than that. Financially, the couple is not doing well. The debts are piling up and Sarita feels too burdened to clean-up all the mess alone. There’s an elaborate Kashyap-Esque sequence somewhere in the first leg of the film where the couple is whisper-fighting among themselves while their kid sleeps in between them. This is black-comedy gold right there.

Sadly, there isn’t much of it after that because the film trickles into the demonetization theme, sidelining the thicker and meatier middle-class-family-in-a-fix narrative. A plumbing disaster that bestows Sarita with bundles of cash just when she needs it is a kind of divine intervention and intrigue you would come to expect from a Kashyap joint. However, instead of building up on this promising premise, Kashyap takes a diverting turn which doesn’t necessarily bring out the magic that we know him for.

The demonetization theme is of course a pretty interesting and controversial agenda. I come from a place where I completely support Anurag Kashyap’s political stand. However, in “Choked,” the theme and metaphors feel stamped-on rather than organically infused. There’s an instant change of tone once you see real-time TV footage and queues of people lining up in front of Banks only to get disappointed by the hastiness of the decision made by our Supreme Leader.

Without pointing fingers, Kashyap also investigates and uncovers the nation’s cumulative bigotry. I especially liked the subtle references made to Modi’s decision through channel clippings. Sushant and his naive friends are automatically denoted under the ‘Bhakt’ category without raising or shaming them. Also, the sarcastic remark by Sarita – a deliberately apolitical character as she counts cash to give to one of her customers completes the political scenario that Kashyap wishes to point out in his film.

However, all of this and much of the latter half could have used some sharp-writing. I have come to believe that every film made by a filmmaker is political. Wherein, he/she doesn’t have to necessarily draw a line and explain the reason for the line being there. In Kashyap’s “Choked“, the line is drawn again and again putting aside the narrative that could have made it more memorable. I mean, a middle-class family struggling with their morality and greed as their kitchen-sink problem turns into a mess of magic could have yielded a more hefty and complex human drama than the one we actually get here. 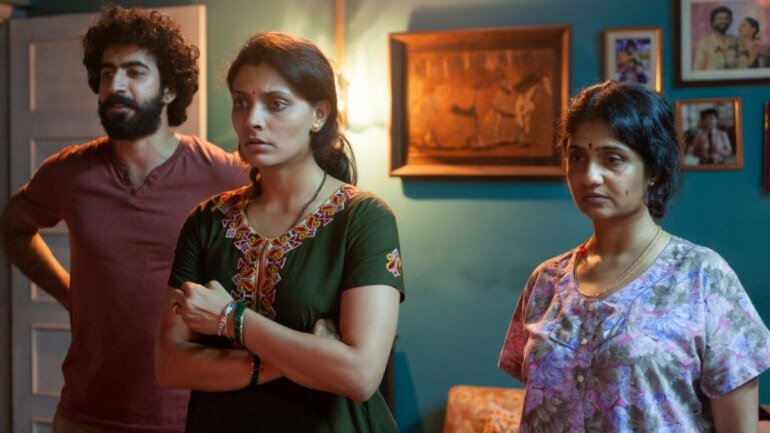 This is only the second film that Kashyap has directed that is not written by him (first being Kanika Dhillon penned ‘Manmarziyaan‘). Nihit Bhave who penned the screenplay before the demonetization actually happened makes me wonder how well the script would have panned out if the entire context was removed. The Birdman-eque Jazz-Tabla score by Karsh Kale is so unnecessary that it almost ruins some of the most interesting sequences in the film. I mean, if a piece of music doesn’t uplift a film then there’s no need for it. The acting is pretty decent with Saiyami Kher and Roshan Mathew roping in performances that they could have done if they were sleep-walking. The only interesting takeaway is Amruta Subhash. Her antiques make up for the lack of great character moments in the film.

‘Choked: Paisa Bolta Hai‘ will divide its viewers. Much like the demonetization phase it propagates, the film will be divided into pre-Choked Kashyap and post-Choked Kashyap. This is by all means his most accessible work. However, it feels like a seasoned director is experimenting to find a newer voice. He is in the lure of being heard instead of creating and letting people consume his art. It is a slippery slope on which Kashyap is hanging right now and I am ready to give him the benefit of doubt yet again.