Manmarziyaan is a showcase of talent both in front of and behind the camera. Well-acted and technically polished, it could have been among the finest films of the year. Unfortunately, the film is let down by its narrative. It loses its grip on you in the second half and never recovers as it plods along to its climax.

The love triangle may perhaps be among the oldest and most beaten to death story tropes in cinematic history. However, when Anurag Kashyap decides to give it a go, one can’t help but check it out. And so, I found myself in a theater watching Manmarziyaan.

The film starts off strong. It introduces its core characters in timely fashion and does a fine job making them all well-rounded three-dimensional figures. You really get a sense of each of their personalities through not just dialog but lots of behavioral quirks. They seamlessly blend into the middle-class Amritsar setting and are believable as real people with raw emotions.

The romance between protagonists Rumi (Tapsee Pannu) and Vicky (Vicky Kaushal) is crackling and very representative of modern-day youth. Rumi’s family gives her an ultimatum to get married. However, Vicky isn’t ready, tension brews and the plot gathers momentum. Enter Robbie (Abhishek Bachchan), a perfectly fine gentleman. He’s found by the local “marriage fixer” and is ready to tie the knot in a heartbeat! Who will Rumi choose?

The first half coasts by on sharp writing and a sense of anticipation and suspense. There are a few genuine surprises in plotting. Also, some truly unique scenes that I hadn’t seen before in the genre. The screenplay hits some emotional highs and I was invested and interested in the character’s lives. 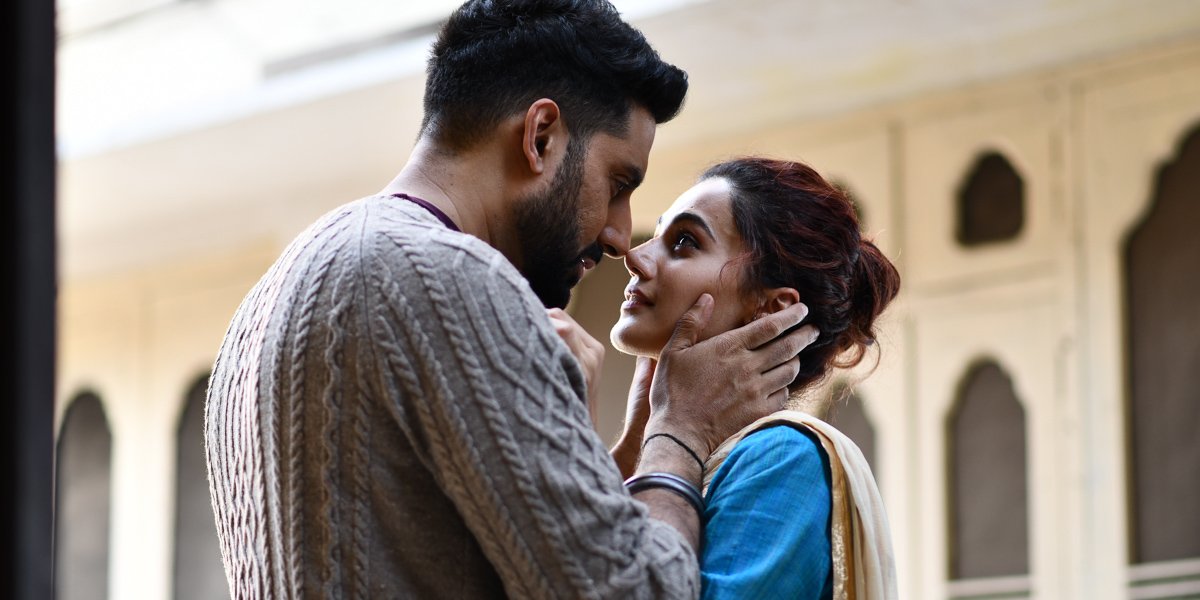 It’s in the second half, however, that things unravel. The narrative goes around in circles. The sense of suspense is gone as the film settles into a predictable groove. At a run time of just over two and a half hours, the film lacks the substance to keep you invested throughout. Towards the end, I felt it dragging and just wanted it to reach the resolution you could see coming from a mile away.

Performances by the central trio are good. Vicky Kaushal and Abhishek Bachchan both slip into their characters and successfully make them completely contrasting. It’s Tapsee Pannu however, who is unquestionably the driving force of the film. Rumi is not perfect by any measure. She’s a flawed, confused and relatable character. Tapsee rises to the challenge. She embodies her spunk, quirks, and flaws all in equal measure to create a character you will love and hate. Emotions run high in this film and all three do a wonderful job in demanding segments. Each of them gets at least one memorable moment to shine.

Manmarziyaan is a technically brilliant film. From its opening shots to the very end, it gorgeously captures every setting. Tracking and close-up shots are employed to great measure, especially in intimate moments. The music is phenomenal. There’s no song and dance routine. Instead, it truly blends into the background and becomes a part of the narrative propelling it forward.

Recommended: Mukkabaaz: Art and the Obstinate Expectations of Avant-Gardism

Manmarziyaan is a showcase of talent both in front of and behind the camera. Well-acted and technically polished, it could have been among the finest films of the year. Unfortunately, the film is let down by its narrative. It loses its grip on you in the second half and never recovers as it plods along to its climax. There are so many individual components to appreciate in this film. Sadly, Anurag Kashyap fails to unite them in an enticing package that’d make a mark.