Once Upon a Small Town (K-drama), Season 1 Finale, Episode 12 Recap & Ending Explained: As Netflix’s heartwarming K-Drama ends with the first season, it feels like we saw two young people who were once strangers become buddies, fall in love, and grow up to evolve into mature partners. The episode indicates that it takes two people to figure out the course of the relationship, which cues us to how Ahn and Ji-yul will direct their relationship amid their busy lives and nosy townspeople.

The show has been a light-hearted content experience with really charming and heartwarming characters that feel really close to home. However, the ending felt like a rushed, tried, and tested format that we have already seen many times before. Nonetheless, no complaints since the show offer you a comforting and binge-worthy experience with its romantic drama and light comedic reliefs along with its picturesque backdrop of lush greens and mountains of the small town called Huidong.

In this article, I discuss the last episode of Season 1 which follows the story of Ahn and Ji-yul. Spoiler Alert – Please read at your discretion.

The season’s last episode picks up when Ji-yul and Ahn steal a kiss in the middle of the street but think someone has seen them. When Ji-a notices a mysterious vehicle parked on the road, she makes a fuss and wants to know more about it. Even though they are relieved they were not the ones to get noticed, Ji-yul and Ahn are also surprised by the situation. Ji-a is also shocked to see Ahn with Ji-yul together at an odd hour, but her mind is more occupied with knowing who is in the car. As it turns out, Yeong-suk and Yun-hyeong are secretive about their relationship and were caught kissing in the car.

After introducing themselves as a couple, Yeong-suk and Yun-hyeong share they were missing one another, so they decided to meet again. Later, Ji-yul tells his friend that Yeong-suk is a kind-hearted woman, and if he is not serious about her, he must not lead her. However, Yun-hyeong says that if it were not for love, he wouldn’t have driven 4-hours to meet her in the middle of the night. The way both look at each other is evident that they are clearly in love and are not worried about what people say about them.

The following day, Ji-yul and Ahn plan to go to a movie first show of the day to avoid people seeing them together. However, fate has something else decided for them that day. While Ji-yul gets a phone call for multiple home visits, Ahn, on the other hand, gets called in to find a lost older woman who has Alzheimer’s. The new couple is persistent in finding time for each other so they can go to the movies; unfortunately, their duty calls override their wishes.

Having spent the whole day clearing their work schedule, when Ji-yul suggests they plan for the movie later, Ahn still wants to meet up so they can catch up after having a long day. However, the police chief wants to celebrate her excellent work and suggests they have a team dinner. Even though Ahn is not pleased to go with them, her polite personality doesn’t make her say no to the invitation.

Ahn gets restless at the eatery as she waits for the dinner to get over. Meanwhile, she keeps corresponding with Ji-yul about her status. When the food arrives, Ahn hurriedly gets up after taking only one bite. While leaving the restaurant, she sees a drunken man making noise and fussing at petty things. Soon everything becomes chaos at the diner when the drunken man picks up a fight.

The situation leads Ahn to get pissed with the crisis as she tries to intervene in the fight and help everyone clean up the mess later. After cleaning up, Ahn looks exhausted and goes to her dinner table to drink a whole bottle of local root beer. In the meantime, Ji-yul waits for her as instructed by Ahn over text. When the women of the town’s welfare group pass by, they see Ji-yul by the roadside and ask for his whereabouts.

We soon see drunk Ahn walking straight to the announcement center of the town. The women and Ji-yul are shocked to see Ahn utterly ignorant of their presence in her drunken state. Tired of keeping her relationship a secret from the town, she wakes the village with an announcement that she and Director Han’s grandson are together. It seems she is finally at a point where she is happy and not fearful about the significant turn of events in her life. Ahn wants to admit that she is in love with Ji-yul and wants everyone to know about it so they can enjoy being with one another at any time. 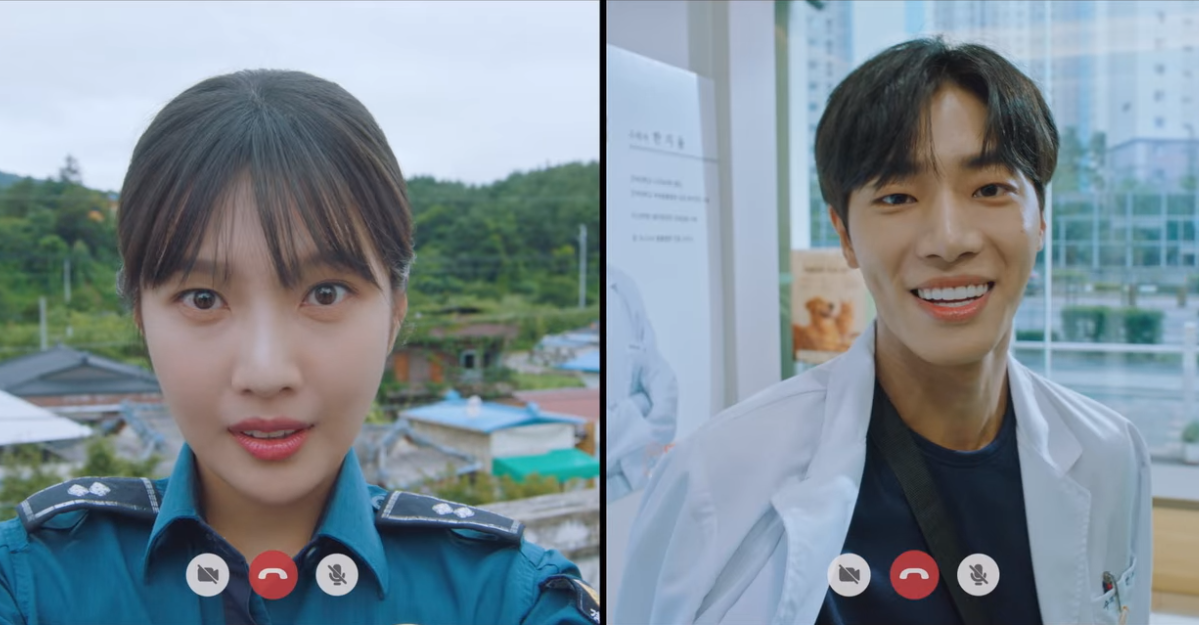 Ji-yul is smitten by his girlfriend’s unusual daring spirit, which he had never seen before. He finds it rather cute and admires her for being so bold, even if it means she is not in her senses. After making the announcement, when both come out, they find the women of the welfare group smiling at them. Se Ryeon says that it was very stupid of Ahn to let everyone in the town know about her relationship in an announcement since everyone already knew about them and was pretending not to know.

Feeling foolish for what she just did out of impulse, Ahn pouts both in anger and irritation. Back at her home, she expresses to Ji-yul that she wants to be the nosy girlfriend who wants to know everything about him at all times. The couple dyes one another’s ring fingers with balsam flowers, which signifies the person belongs to someone.

ONCE UPON A SMALL TOWN (SEASON 1 FINALE), EPISODE 12 ENDING, EXPLAINED:

We see the change in Huidong’s environment as the summer ends, and a new chapter begins with the new season. While dropping Seon-Dong to school, Ahn asks him if he has had a good summer vacation. He tells her he had the best time since seeing his girlfriend. Ahn smiles and reflects on how much she misses Ji-yul with him returning to Seoul. While going to work, she meets Yeong-suk, who is seen talking to her boyfriend.

The long-distance relationship slowly makes Ahn and Ji-yul nervous about each other as they don’t communicate as often as they should. After much contemplation, when Ahn Ja-young video calls Ji-yul in Seoul, she notices his arm broken. She gets furious as she learns that he got a hairline fracture and didn’t decide to tell her. Seeing her boyfriend in such a state makes Ahn upset and disconnects the call.

Next, we see that the two cannot stay apart from each other as the distance between them makes them more anxious. Meanwhile, Ahn meets her best friend, Sang Hye-on, to share the news and get a cue to what needs to be done. It seems Hye-on has moved on and is in a position to advise her that if she misses her boyfriend, she must visit him instead of waiting for him to come here.

Ahn borrows her best friend’s van and drives to Seoul, only to find Ji-yul has gone to Huidong to see her. Yun-hyeong wanted to keep her company, but since he had prior plans with his girlfriend, he comforts Ahn and suggests she waits for Ji-yul to return. Upon his return, Ji-yul shares that he didn’t want Ahn to be worried about him; however, she tells him that she wants to be aware of her boyfriend’s whereabouts, including his well-being. They both reconcile, and Ahn suggests that since she has everyone she needs to be safe in the town, it will be best to visit him whenever either of them misses one another.

The episode shows us the transition of their relationship with the mature looks of the characters and the changing season. Sang Hye-on has organized a peach picking festival that invites nearby tourists. While going to her work, Ahn helps a young couple who gets lost while finding the peach farm. Later, Sang Hye-on mentions to Ahn that her dog’s puppies are booked for the quarterly vaccination by Doctor Han.

Later, Ahn goes to the vet hospital to get the puppy vaccinated by Director Han but finds Ji-yul waiting for her with a beautiful bouquet to congratulate her on her promotion to becoming the chief of police. Surprised to see him unannounced in the town, she asks why he didn’t tell her about his visit. He tells her that he has also been promoted to the Director of a hospital and will now take care of Huidong’s vet hospital.

As much as she is delighted to hear the exciting news, she still questions if he did this to be with her. However, Ji-yul explains that his grandfather is old now and must retire, and it is difficult to find a good veterinarian who can treat big cattle simultaneously. It is why he sent his grandparents on a cruise to travel the world as a retirement present, and he took over the hospital to be with her and take care of animals, both his passion and duty.

While talking, Ji-yul notices that the dye they applied to one another on the finger has faded, so he takes out a ring box and proposes to Ahn in a cheesy yet wholesome manner. The show’s episode ends with the couple promising each other to be together doing what they love and smiling in content how life has taken a beautiful turn in this gorgeous town.

The Empress (Season 1): Recap & Ending Explained - A Royal Portrait of a Wild Flower