The exceptionally hardheaded and unpredictable crime drama, Classe tous risques (‘The Big Risk’, 1960) had the misfortune of releasing right before the onslaught of French New Wave, courtesy of Jean Luc-Godard’s impactful Breathless (‘A bout de souffle’).Naturally, the film relegated to the background, a punishment for being out of step with the times, although it highly impressed film-makers like Jean-Pierre Melville, Bertrand Tavernier, and Robert Bresson. Thanks to BFI, Classe tous risques has now renewed its status of ‘lost classic’ to become the ‘classic French crime film’. Classe tous risques was the second directorial project of Claude Sautet. But since his debut feature was just a silly, slapstick farce (Bonjour sourire!) this film gave viewers the taste of Sautet’s subtle and elegant aesthetic and thematic preoccupations.

Claude Sautet has largely made low-key, psychologically nuanced character studies throughout his career, the most widely regarded among them was made towards the end of his career: A Heart in Winter (1992) and Nelly & Monsieur Arnaud (1994), both starring the enormously talented and beautiful Emmanuelle Beart. Similarly, the classically structured Classe tous risques (The Big Risk), even though opens with a mesmerizingly staged robbery and car chase sequences, is at its heart a complex character study of a ageing criminal who has run out of choices, friendships and loyalties. 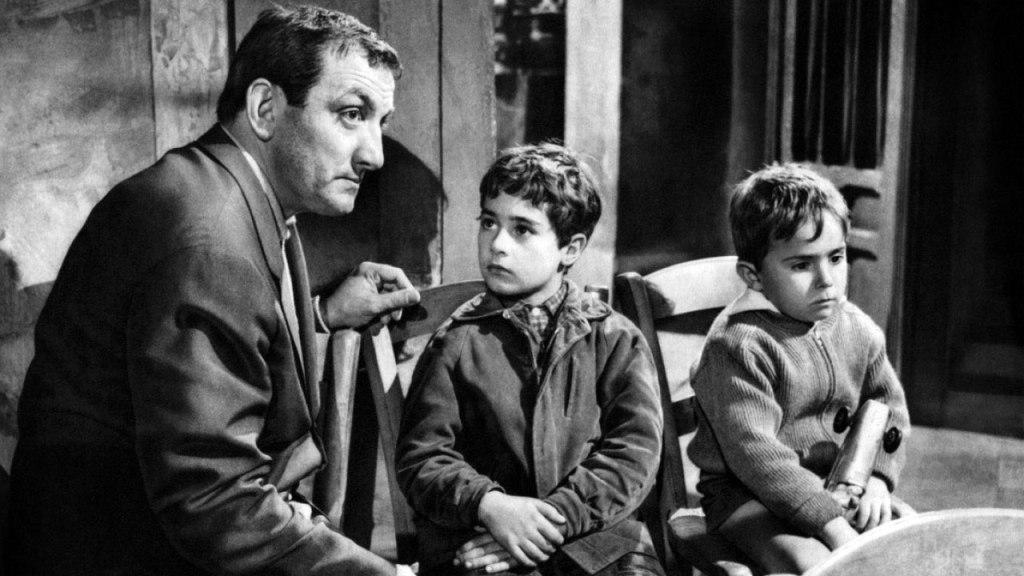 The quintessential Italian-born French star Lino Ventura plays the big-boned, laconic underworld kingpin Abel Davos, who has been living in exile in Milan with his wife and two sons since death sentence awaits him back at France. Abel, his wife Therese (Simone France) and two little boys (Robert Desnoux and Thierry Lavoye) have becomed tired of life on the run. Hence Abel decides to return to Paris and before crossing into French border he decides to do one last ‘easy job’. Abel puts his family on a train and then takes his trusted partner Raymond Naldi (Stan Krol) to knock over couple of bank couriers on the busy streets of Milan.

An adrenaline-pumping chase sequence ensues and the duo play devilish trick to cross into the French homeland unharmed. Sautet’s setup and staging is economical, but he gets maximum tension out of these earlier scenes, akin to celebrated episodes in French classics like ‘Touchez pas au Grisbi’, ‘Bob le Flambeur’, and ‘Rififi’. Despite crossing into France and reuniting with his family, tough luck plagues Abel’s trip to Paris.

The tragic deaths of Therese and Raymond leave Abel and the boys to be stuck in Nice. Abel desperately seeks the help of his former associates, who are now well-settled and rich, to smuggle him into Paris. Rather than helping Abel directly, they leave the job to a suave stand-up guy Eric Stark (then-unknown Jean Paul Belmondo offering an effortlessly cool performance). Eric successfully transports Abel and his boys to Paris (in the back of an ambulance), and alongisde meets a Liliane (Sandra Milo), an attrative wannabe actress. When Abel’s former associates cut short their links with him, Abel holes up in various places with the help of Eric. The two also develop strong bond of friendship amidst the hopeless situation. With the police force casting wide net to catch Abel, betrayal and violent reactive measures seem inevitable.

Classe tous risques was based on Jose Giovanni’s novel, who also co-wrote the script with Claude Sautet. Giovanni was a death-row-inmate-turned-novelist/screenwriter; he has written scripts for ‘Le Trou’, ‘The Second Breath’, ‘The Sicilian Clan’, etc. Frequently thrilling and suspenseful, the first half of Classe tous risques retains glorious bits of hard-boiled gems, although it’s touch bleaker than the American film noirs. The pace slackens from then on, but Belmondo’s presence brings much-needed warmth and grace to the narrative.

While the narrative arc involving Abel and his erstwhile colleagues looks predictable on the outset, Sautet and Giovanni’s script holds surprising turns by always getting deep into the incisive psychological truth of the situation (Giovanni’s intimate knowledge of the underworld as always offers authenticity to the proceedings). There are certainly few shortcomings in the narrative, the chief being the unconvincing impassivity of (Abel’s) children as the writing allocates too much time to detail the stoic Abel’s evasive tactics.

Classe tous riques is mostly presented as an existential fable. The protagonist’s survival directly or indirectly heaps suffering and anguish upon others. Lino Ventura strives to make Abel the film’s moral center, flawlessly balancing the old criminal’s warmhearted side and penchant for violent retribution. Ventura reveals a man full of despair, but he also bestows a measure of dignity to the character. Despite keeping a formal distance from Abel and using a third-person voice-over to chronicle what happened to him in the end, Sautet repeatedly gets to the humane side of Abel.

His kindness to the young working girl living in his apartment building is one good example. The kindness he bestows her is fairly returned, but so does the bad deeds Abel commits comes back to haunt him (Sautet’s world is strictly moralistic). Belmondo’s Eric, who is seen as the younger version of Abel, shown to be destined for a much promising future if he shed his predilection for criminality. It is further insisted through Eric’s romantic interlude with Liliane. However, both Eric’s love for Liliane and his bond with Abel seems a bit tenuously established unlike the depiction of  the noble, allegedly masculine codes – loyalty and honor – and the penalties for subverting those codes.