At the outset, Canadian film-maker Evan Morgan’s feature-film debut The Kid Detective (2020) looks like a simple dark comedy involving a jaded gumshoe straight out of the film-noir universe. It’s ‘what if’ bait is smart. What if a Nancy Drew or Hardy Boys type star crime solver never realizes his full potential, and left to deduct trivial cases in his 30s? Writer/director Evan Morgan not only cleverly executes this idea, but also surprisingly looks beyond the surface. The result is a pensive character study wrapped within a grim mystery.

A stunningly good Adam Brody plays Abe Applebaum, who was once a precocious suburban kid solving minor troubles and petty curiosities of the neighborhood kids. Initially operating out of a treehouse and later in an office, the 12-year-old Abe made the local newspaper and was even promised free ice cream for life. He proclaims to have solved more than 200 cases in his time and garnered the most attention when he found the culprit, who stole the money from a school fundraiser. Now the shabby, alcoholic 30-something ‘kid detective’ only draws sullen stares from the residents of small-town Willowbrook. Abe still operates out of the same office, manned by a Goth secretary (Sarah Sutherland) sporting an I-don’t-give-a-fuck look, and mostly takes cases of lost pets. 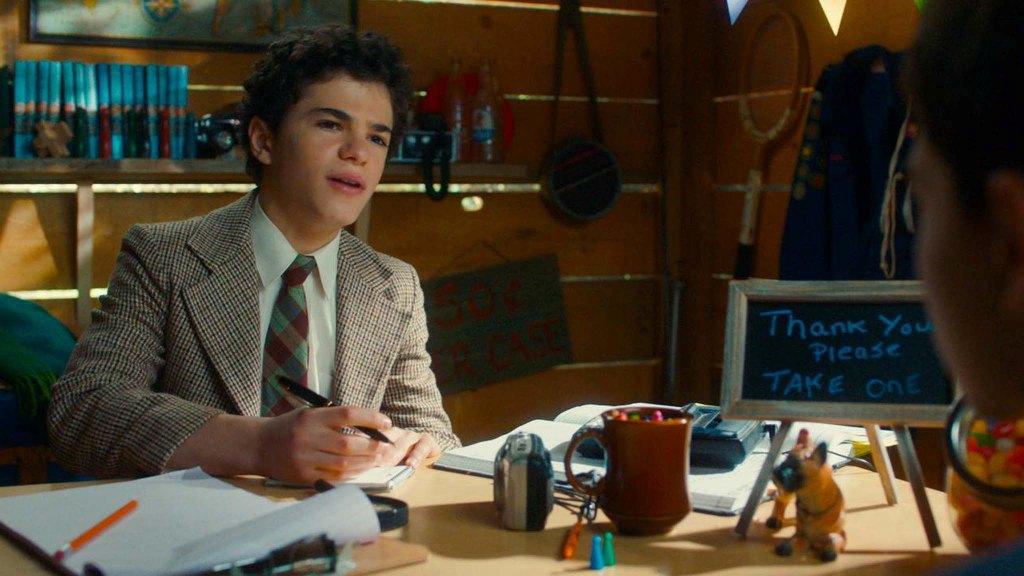 Abe’s parents (Wendy Crewson & Jonathan Whittaker) are annoyed that their son is still playing the detective. But they are also done wasting their energy. An event in the past seems to have created a hole in Abe’s life. It was the missing case of a local girl named Grace. Though no one expected a pre-teen to solve it, Abe became so obsessed with it and was broken when he couldn’t. Adam Brody and Evan Morgan do a really wonderful job throughout this initial set-up. Abe’s haplessness naturally lends a comic tone. Yet at the same time we can sense the deeper melancholy at play. Morgan also strikes this balance by making few ingenious observations about the increasingly cynical small-town life.

Related to The Kid Detective: The Way Back [2020] Review – An Emotionally Satisfying Personal Redemption Story

The stuffiness is prevalent in the air of Willowbrook. Having lost its innocence, its younger residents are probably deriding at the possibility that they will be brought up, mature, and die in the same place. Into this dreary atmosphere, Abe lands on his first ‘real’ case. A sixteen-year-old client named Caroline (Sophie Nelisse) asks him to solve the murder of her boyfriend. Though disillusioned, the kid detective sees it as one final shot at redemption. While Abe occasionally impresses Caroline with his sleuthing skills, some of their micro-adventures bring him embarrassment which he nonchalantly brushes off. Halfway into the mystery, I felt Morgan is going to hit a dead-end. But he takes an intriguing dive into the darkness, getting to that WTF twist without any cheap flourishes.

It is necessary to be vague about Kid Detective’s central mystery because Morgan doesn’t approach it through the lens of genre. Abe’s pursuit of truth doesn’t really set up unpredictable wild turns. Every misjudgment of Abe or his keen observations offers something about the character and the bubbles they inhabit. The darkness and humor in the narrative never dismiss the reality of the characters. Hence everything seems to emerge organically – either laughs or shocks – from the coherently rendered narrative universe. Director Evan Morgan particularly deserves praise for the smooth tonal juggling act. In the hands of a lesser talented film-maker or an actor, everything might have come off as a little too schticky.

The Kid Detective might be narrow in terms of scale when compared with Rian Johnson’s ambitious Brick (2005) or Paul Thomas Anderson’s enjoyably discursive Inherent Vice (2014). Brick, in particular, studiously transplanted noir tropes into a high school’s criminal underworld. I don’t know if Kid Detective would have that lingering effect on me as those two films. However, Morgan’s work should be thoroughly appreciated on its own merits. The film largely works because Abe Applebaum is a relatable character. We might know a thing or two about how a lost dream or an imagined failure can push us through that slippery slope. I read that Evan Morgan was a child actor who acted in few episodes of horror anthology series ‘Goosebumps’. Maybe he could sense the melancholy of a former child star.

Good detective yarns don’t really offer any catharsis. The coolly self-aware Kid Detective answers its mystery with that in mind. The comfort is in the pursuit of truth, not in the truth itself. In fact, the truth deepens the disillusionment and imparts more unanswerable questions. By the end, Abe Applebaum is no more an object of ridicule. He has built a bridge between the contrasting notion of how he perceives himself and how the world perceived him to be. However, Morgan doesn’t free his protagonist from the relentlessly cruel reality. And when such scorching reality pierces the frigid insides all one can do is cry.

Overall, The Kid Detective (97 minute) is an awesomely bittersweet detective mystery that’s although built on familiar tropes of gumshoe film noir never comes across as a patchwork.