The Art of Self-Defense [2019]: ‘Fantasia’ Review – A pitch-black satire on Toxic Masculinity

There’s so much one can write about Riley Stearns and his unique sensibility. His debut feature film ‘Faults’ was a sharp psychological investigation of the world of cults. While left seriously underseen, it had some of the finest character moments in dialogue-driven films in 2015. With his sophomore film ‘The Art of Self-Defense‘, Riley showcases a bone-dry comedy about the toxicity of being a modern alpha-man.

The film opens with Casey Davies (Jesse Eisenberg). A simple, introverted accountant with gentle mannerisms. We learn later in the film that there are only two things that he really likes in his life. One of them is the cute german dog that is his only companion. The other is his wish to learn French and use up his stacked end of holidays to visit the country. The reasons for the visit are purely based on his understanding that French people are gentler than Americans.

His mannerism and a slight feminine side often make him the butt of jokes. He is also bullied by supposedly more masculine men at the office. To put it just neatly – The only person who does care about him is his boss who sees him as a good and loyal employee at work. The most hectic point of his days through the week comes when he is out of dog food. Going out to buy dog food gives him the hibbie-jibbies. His underconfident persona is easily taken advantage off. Which is why one of these days a few thugs beat him down to a pulp. 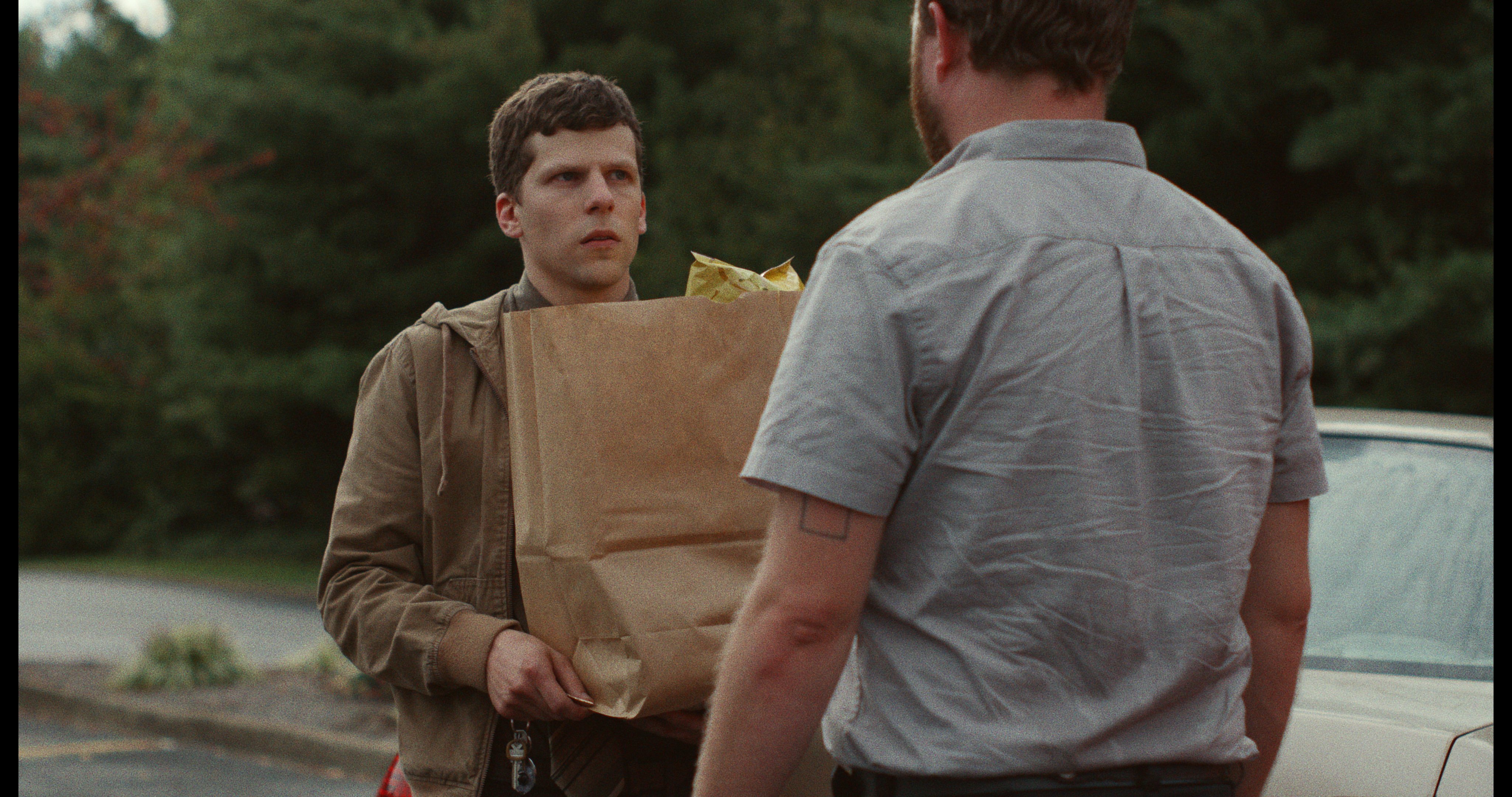 Distressed and completely broken for not being able to stand up for himself, Casey stumbles onto a Karate school. Seeing how it intrigued him, he sits down to see an example of self-defense for the first time. The unique set of rules and colorful belt codes get him interested. The lead instructor who goes by the name Sensei (Alessandro Nivola) manages to sign him up for demo class.

Casey slowly starts developing a liking for Karate as it gives him the self-confidence that he always craved for. However, when he is still intimidated by stronger, masculine men who blast loud music and are ineptly bullies. When he approaches Sensei with this problem, he suggests Casey comes to the night class. This is where things start taking a dark turn for worse.

Riley’s ‘The Art of Self-Defense’ can very well have an instant derivation from David Fincher’s masterpiece Fight Club. In fact, many people including the director himself bask in being called a solid counterpart for the film that we don’t talk about. However, I beg to differ. With ‘The Art of Self-Defense’; Riley presents a bleak, absurdist comedy that might have its own cult status soon.

Presented as a razor-sharp representation of contemporary men, ‘The Art of Self-Defense‘ drives the competitive nature that has been forced into each one of us. If not trying to rank better than one another; one is at least violently dreaming of racing past the competition. In this race to become the alpha – Both men and women are mined into emotionless beings who only understand what’s on the surface.

From the very first scene to the last, Riley maintains a deadpan aesthetic that doesn’t nudge any characters or their motivations even when the tone gets absolutely pitch black. Of course, the film’s final act motions into genre film territory and it is bound to divide audiences, but overall the film stands aloft on a hefty critic on masculinity.

Riley’s film is a nightmare that constantly drives on the thin line of absurdly funny and absolutely creepy. Which not only serves the central satire perfectly but also helps bring out multiple themes in the process. It is not only a takedown of masculinity but also how certain cults are formed out of the want to be better. Riley whose previous film was also about cults knows how to not let his script run pale with subtle metaphors. Pesenting belts that define strength and manliness having a wrong meaning evoke some of the film’s finest moments. 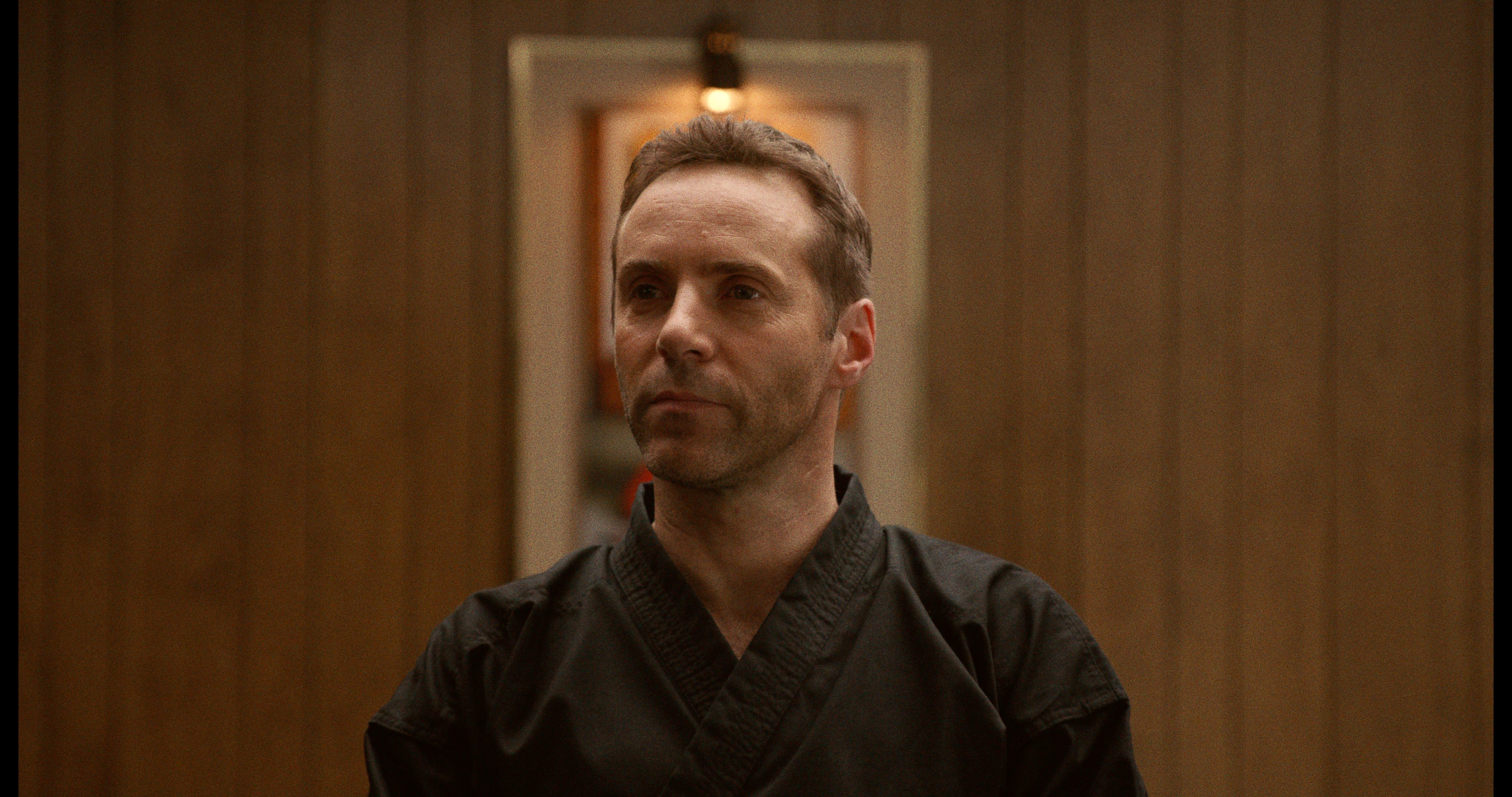 ‘The Art of Self-Defense‘ works because of the fine performances. Imogen Poots stars as Anna. The only women in the dojo. She manages to authentically portrays the vulnerability of being left out while fighting her way through. Jesse Eisenberg as Casey is, of course, casting perfection. The real star of the film is Nivola. His hyper-masculine ideologies bring out some of the funniest moments while also bringing the much needs creeps.

‘The Art of Self-Defense‘ is two in a row for Riley Stearns. His pitch-black humor, couples with a self-aware narrative that drives essential themes home becoming the next big thing for American Indie Cinema. In spite of being a little inconsistent, there’s a chance that the film will echo with everyone. Be it a black belt or a yellow, this is surely something that will resonate up and down the hierarchy.

Knives and Skin [2019]: 'Fantasia' Review - A Curated mess you would like to watch

The Art of Self-Defense [2019]: ‘Fantasia’ Review – A pitch-black satire on Toxic Masculinity