Scottish writer-director Ben Sharrock’s Limbo (2020) is a part deadpan comedy and part character study of an asylum-seeker. The refugees, seeking a new life in Britain, are packed off to a remote Scottish island, enduring the bureaucratic nonchalance while waiting for a mail that may grant them asylum. The beautiful, as well as intimidating landscape of the island, obviously adds a layer to Sharrock’s narrative, externalizing the asylum-seekers state of limbo. Mobile phone signal is poor, so they have to rely on the island’s only pay phone to make the overseas calls. Since asylum-seekers aren’t allowed to work, they are mostly confined to the cramped cottages, forlornly re-watching ‘Friends’. They can walk through the windy island and occasionally might encounter the mirthless and few racist island natives.

Omar (Amir El-Masry), the Syrian asylum seeker, is the protagonist. He is a young musician who walks the stretches of the island every day, carrying his musical instrument Oud and his unspoken traumas. He has left his parents and a brother who is fighting in the war. In the phone calls, he tries to justify his decision to leave – to himself and his parents – whereas his father questions why he isn’t playing Oud in the streets for money. “A musician who doesn’t play music is dead”, Omar is often reminded. Mom and dad themselves are impoverished refugees in Istanbul. He gives them hope that once he is granted asylum, he will bring them too. But the colorless present and nightmarish past offer him nothing hopeful about the future. 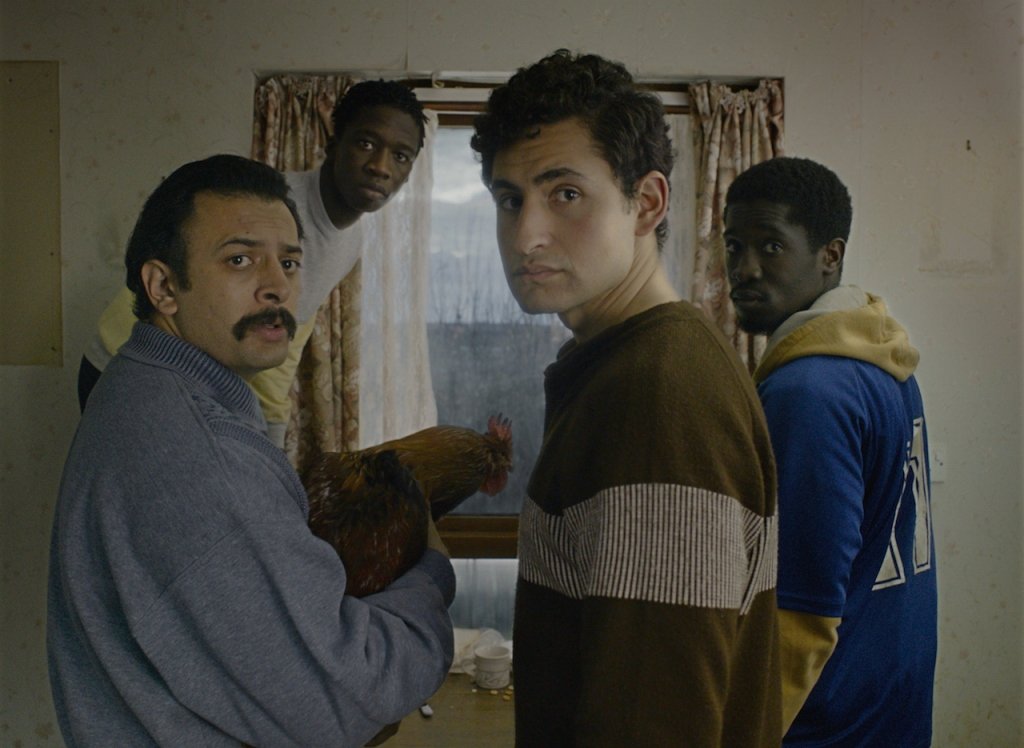 Limbo might sound like a heavy tale of a refugees’ deep emotional suffering, but it doesn’t start like one. Ben Sharrock initially doesn’t define the asylum-seekers through their woes. The film’s interesting opening scene is set in the Refugees Social Program classroom, where a couple of well-meaning yet comical social workers – Sidse Babett Knudsen & Kenneth Collard – enact a scenario for the all-single men class pupils. “A smile is not an invitation”, is written in the blackboard as the social workers theatrically role-play what all could be considered as inappropriate behaviors with women on the dance floor.

Lessons to discipline the men for Western culture, but the eccentric enactment is positioned against the baffled looks of men who have fled from their war-stricken, poverty-ravaged countries. Such ironical and deadpan humor derived from unique compositional ideas offers a smooth entry-point into the tale. The symmetrical, static frames which arrest the island’s beauty, as well as its isolation and the occasional stiff close-ups that capture the character’s emotional frigidity, reminds us of Jim Jarmusch, Aki Kaurismaki, and Wes Anderson. Furthermore, everything from the characters to their daunting surroundings is in sharp focus.

The lone telephone booth in the middle of the fertile landscape, the static shot of a lonely road or camera smoothly tracking through the half-empty shelves of the small grocery store, Sharrock packs a punch with the visuals. In fact, this tableau-like approach tends to gradually humanize his characters. It’s definitely a tightrope situation where little mishandling of comic elements could have made the approach very insensitive. Yet Limbo fares well in the first half of the narrative, its visual irony and comedy convey the bleaker realism of the refugees better.  The emotional paralysis created by traumatic past, the present hopeless and unrelenting monotony is accentuated through a simple yet precise set of imagery.

The asylum-seeking single-men in Limbo speak in English. Like the digitally connected population, their identities and point of reference are globalized. They refer to ‘Friends’, football clubs, Freddie Mercury, etc. But to embrace such globalized identity through fragments of Western cultural references is essential to survive in their new life. Farhad (Vikash Bhai), an Afghan refugee tries his best to assimilate himself to this new identity. He’s been neglected by the bureaucracy for a long time. At one point, he says “They put us out here in the middle of nowhere to break us.” We know he is bearing a cross, although we don’t know what exactly. But he strives to find optimism by constructing his new identity (however illusory it is) to curb the feelings of despair and pain. Vikas – who has a gentle yet sad face – offers a brilliant performance as Farhad though I felt this character was a bit underwritten, and at lot of occasions solely defined by absurdist humor. 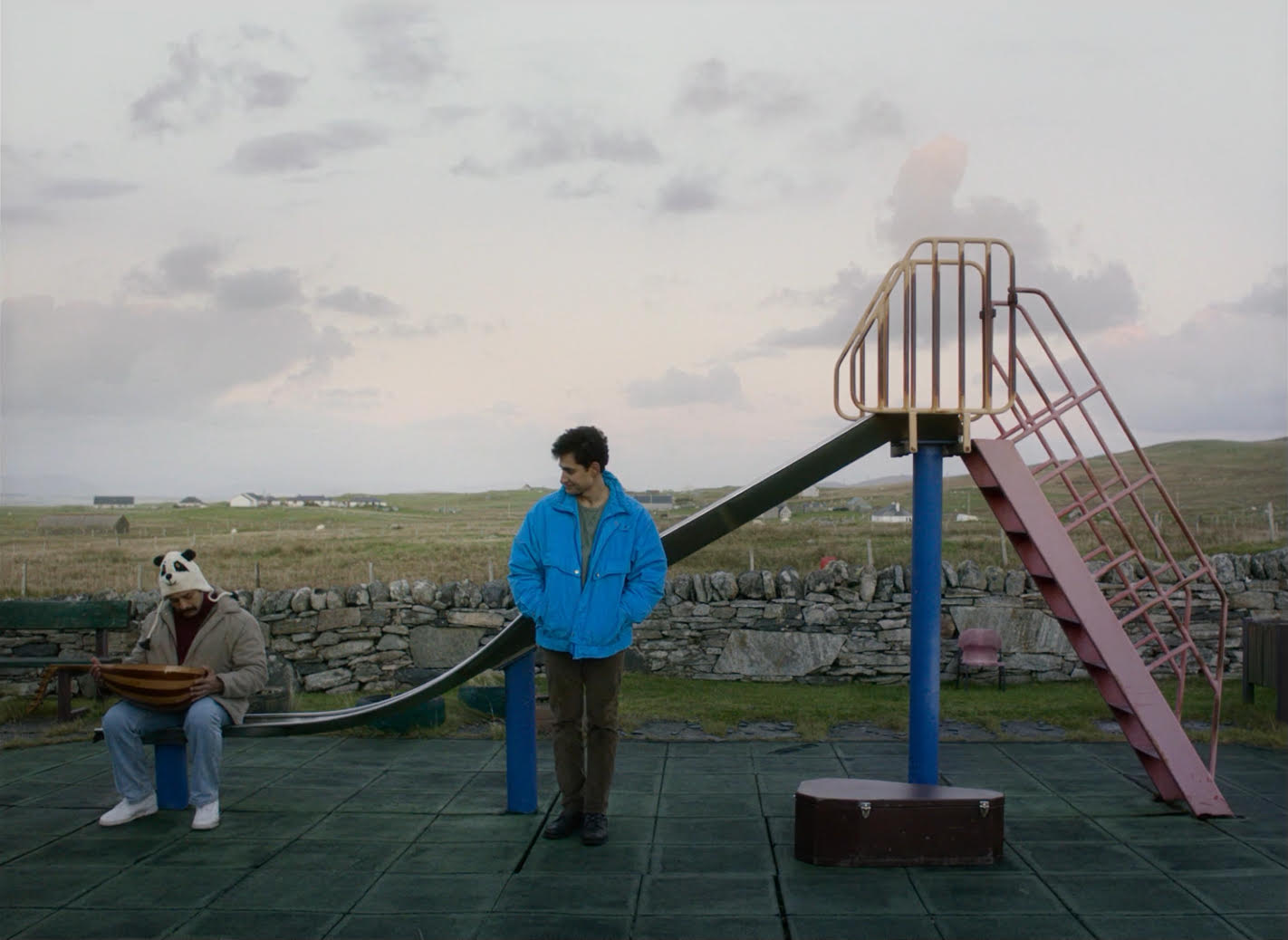 Limbo does get a bit conventional after a point. Its humorous tone melts away, replaced with intimate emotional struggles which build to a very obvious ending. Ben Sharrock attempts to deepen Omar’s existential chasm since he’s burdened by survivor’s guilt, particularly for leaving his elder brother Nabil (Kais Nashif) on the battlefield. Nevertheless, the explicit manner (punctuated by apparent metaphors) with which Sharrock deals with such emotions comes across as antithetical to the early nuanced approach. By the time, the narrative reaches the hallucinatory encounter with Nabil, I felt it was a tedious way to resolve the agonies and conflicts within. But despite such a move towards formula, the sense of restraint in Amir’s performance lessens the disappointment to some extent.

Also Read: The Other Side of Hope [2017] – A Compassionate Refugee Dramedy

Irrespective of the flaws, Limbo is definitely a daring and different refugee-crisis drama. Mr. Sharrock did his undergraduate degree in politics and Arabic and spent a year in Damascus before the start of the Syrian civil war. He has also done projects and worked on a short film in a refugee camp in Algeria. Moreover, the filmmaker has taken great efforts to provide an authentic representation of the asylum-seekers – hailing from Syria, Afghanistan, Nigeria, and Ghana. The authenticity with which the characters are written interestingly transcends their identity, associated with nationality, and pushes us to relate to them.

Just like how the meticulous stylizations and quirkiness eases us into the narrative, the human experience in the purgatorial landscape at times transcends the ‘refugee movie’ label. Yet as I mentioned before, I wish the exploration of Omar’s interiority was more poignant, subtle, and less conventional. Nevertheless, the fascinatingly visualized Limbo (104 minutes) delivers a compelling portrait of the stateless men.