Japanese cinema has persistently and sensibly dealt with environmental issues, particularly modern society’s encroachment into the wilderness. The Studio Ghibli movies with its penchant for romanticizing the ordinary combined with the wizardry of its anime masters – Hayao Miyazaki, Isao Takahata – bursts with stunning imagery of the natural world. The astoundingly animated scenery in Studio Ghibli projects would always be in my album of fondest movie memories, though I can understand the criticism that it’s portrayals of nature does tend to be bit simplified and romanticized. Then there’s the slice-of-natural-life manga series Little Forest by Daisuke Igarashi which was adapted into a two-part movie. A Korean version of the manga series was made in 2018 with The Handmaiden-fame Kim Tae-ri charmingly playing the central role.

Little Forest revolves around the life of a young girl called Ichiko, who lives alone in rural Komori at the edge of a forest. The bewitching aspect of the story is the dishes Ichiko prepares from the ingredients she scavenges or harvests from her field. Little Forest is a lyrical love poem to food and nature as well as an intriguing ethnographic fiction. Despite featuring the romanticized city dweller’s yearning for ‘back-to-nature’ life, Little Forest is considerably rooted in realism, delineating the hardships of country life. Veritably, a salve for those suffering from anxiety and depression.

If you go back to the works of old Japanese masters, man’s changing and ambiguous relationship with nature have been a predominant theme. Mastercraftsman Hiroshi Shimizu offered a vivid sense of the natural environment in his silent cinema as well as the talkies. The novelistic period films of Kenji Mizoguchi and Akira Kurosawa have showcased how hard it was for people born into lower caste (enduring adversities from their rulers and nature) during the Tokugawa and Meiji era. Kaneto Shindo’s Naked Island (1960) and Shohei Imamura’s The Ballad of Narayama (1983) is defined by its harsh naturalism, shocking us with its depiction of the brutal living conditions in rural Japan. Naomi Kawase is a renowned contemporary Japanese auteur who persistently meditates on human’s relationship with nature through her incandescent imagery. Tetsuichiro Tsuta’s The Tale of Iya (‘Iya Monogatari: Oku no Hito’, 2013) hails from this long, rich cinematic tradition of nature narratives. Shot on the now-rare and grainy 35mm film, The Tale of Iya chronicles a way of life fast disappearing. 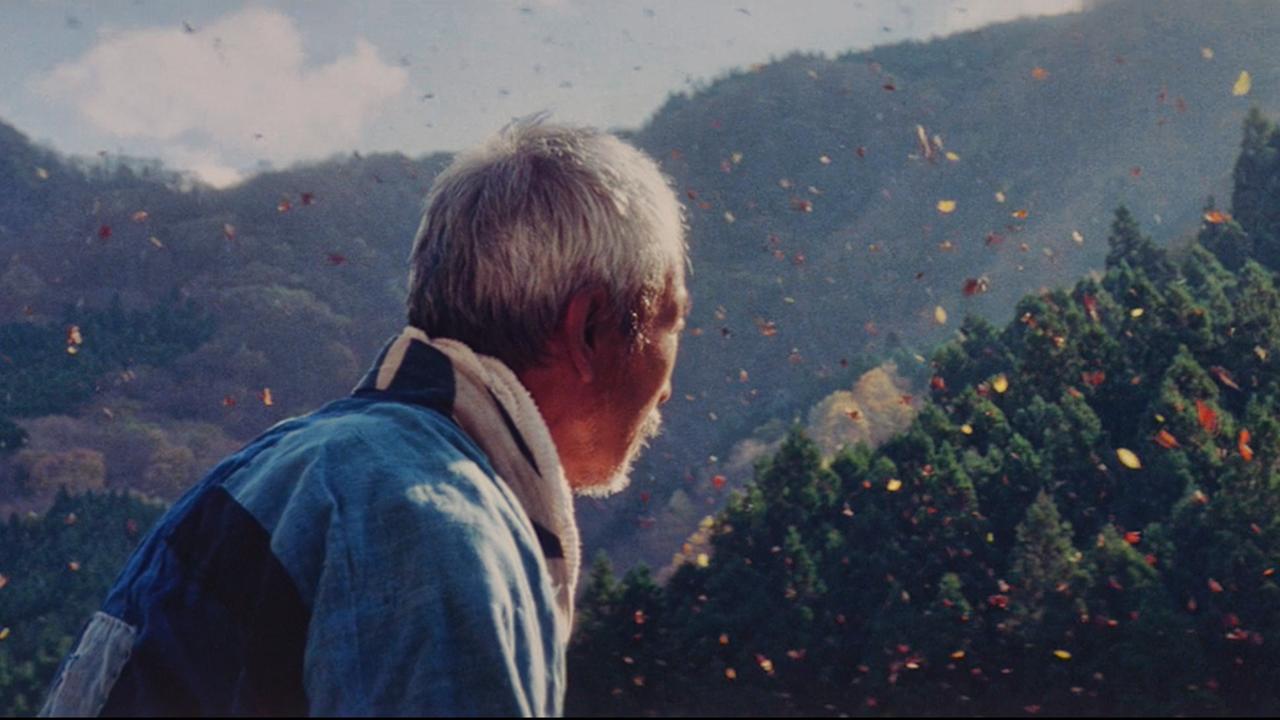 The film is set in the gorgeous, mountainous valley of Iya in Tokushima prefecture. It opens in the vast expanse of deep snow in which alone old man (Min Tanaka) in traditional blue clothes makes his way over the rough terrain. He walks downhill and sees a car that has veered from the road above, the lifeless body of a driver hanging through the windscreen. Nearby in the frozen river, he sees a little pink dot: a baby, seemingly unharmed. The old man returns the baby’s clear-eyed gaze, carefully walks across the ice, and picks her up. The baby is now a high-schooler named Haruna (Rina Takeda), sharing with her elderly guardian – whom she lovingly calls ‘grandpa – a simple existence linked to the cycles of nature.  Grandpa is a loner, barely talks a word to Haruna and yet she is happy with her life. At one point, a character suggests that Haruna knows everything about how she came to live with grandpa, but it’s not explicitly stated whether the girl really knows any details about her dead parents.

Related to The Tale of Iya: Honeyland [2019] – An Exceptional and Unembellished Tale of a Woman’s Connection with Nature

Everyday walking down to school from her mountain home, Haruna sees ‘grandma’ (Tomie Nishi), an old lady living alone who makes sack mannequins which not only serve as scarecrows but also seem to make up for the rapidly declining village population. Haruna has a friend at school named Kotomi (Sachi Ishimaru), daughter of an inn-owner with usual aspirations to move to Tokyo for college after finishing school. Haruna’s only desire is to live with her grandfather and not grow-up. She dismisses the advances of a young world-weary construction worker, Akira (Hitoshi Murakami) who even gifts her scooter to alleviate her long walks to school and local shops.

Grandpa spends his days cutting trees, selling it to local timber factory, and accepting the meager payment they provide. He walks or stumbles to the humble wooden shrine to offer his prayers. He hunts deer since the farmers’ vegetable patches are relentlessly invaded by them. Moreover, he does traditional farming. With no running water and electricity, it’s big challenge carrying water for the crops from the nearby stream. Writer/director Tetsuichiro Tsuta intersperses placid, self-fulfilling life of Haruna and Grandpa with other characters in the village and the escalating conflicts.

A tunnel that’s being constructed through the mountain to open up the region to tourism industry looks like a scar on the beautiful surroundings. Ironically, opposing the tunnel project is a group of foreign environmental activists and disillusioned young Japanese urbanites. The tension, nevertheless, doesn’t lead to anything dramatic as such dissenting voices are filtered out in the name of ‘development’. Japanologist Alex Kerr who has bought a farmhouse in Iya in 1971 explains how its rural economy propped up by subsidizing civil-engineering works. He explains that more than 90 percent of all money flowing into Iya comes from road and dam-building projects, invalidating any environmental initiatives. “The most remarkable paradox is that Iya doesn’t need these roads and dams; it builds them only because it must spend the construction subsidies or lose the money”, encapsulates Alex Kerr [1].

Kudo (Shima Ohnishi) is one of those Tokyo drop-outs who get instantly bewitched by the beauty of Iya. After looking at simple existence and caring relationship between Haruna and grandpa, he becomes determined to start a farm on his own. He gradually masters the ways of traditional, organic farming. It’s simply agonizing to watch Kudo carrying bucketful of water in the wooden-stick gizmo from the stream. The experience really toughens him up and there are small victories in this self-sufficient life. But when a deer invades his vegetable patch and when winter sets in with no safety net to protect himself from starvation and cold, Kudo struggles to cope.

Magical realism and surrealistic juxtapositions takes over the final-third of the narrative, which follows Haruna’s struggles to find her place in the modern world. Though visually evocative and poetic, the potpourri of fantasy elements in the final-third of the epic narrative seems to possess various metaphors, whose meaning is totally lost on me. On further reflection, I however found Haruna eventually ‘rediscovering’ her ‘grandpa’ fascinating.

Also, Read – The Levelling [2017]: An Internal rage and grief tripping in silence

At 169 minutes and moving at a glacial pace, The Tale of Iya will undeniably be an off-putting experience for many. Nevertheless, I found the narrative to be profoundly moving and the rich imagery of Iya stayed long in my mind after the ending.  Tetsuichiro’s film wordlessly traverses through various themes – the passage of time, deforestation, preserving the balance with nature, the toughest aspects of country life, cyclical nature of life, etc – without a tinge of romanticism in its portrayal of the remote farming community. Some of the fairy-tale aspects of the narrative deepen the beauty of its aesthetics: for instance, the wonderful sequence of sackcloth mannequins suddenly coming to life one wintry night and doing regular chores in the village. Tetsuichiro maintains a remarkable rhythm throughout the first two hours of the narrative, a quality that feels so awe-inspiring since this is the young film-maker’s second feature film.

Overall, The Tale of Iya is an extraordinary elegy on the wounds we inflict on our mother earth. Both strange and familiar, the film is an interesting blend of natural and preternatural, ethnography and mythology.