The Two Popes is available on Netflix.

It is a movie focused on the interaction between the two, as they discuss the past and future of the Catholic church. This biographical drama is inspired by real-life events, including the friendship between Pope Benedict and Pope Francis, as shown in snippets during the movie credits.

With a controversial topic and a controversial real-life figure at the centre of it, the movie is bound to become the subject of much analysis among the avid viewers. The thing that remains with you, however, after a first viewing, is not the religious aspect of it, but that which is fundamentally human. I was left with a warm feeling, which endured several days. Writing this review with more distance from it, I still return to the tender moments.

The film guides us from the streets of Buenos Aires, where Bergoglio began as a young priest, to the Vatican, where he flies much later in life, looking to resign as Cardinal. We see him before taking on the priesthood, as he falls in love with a woman, and then has to “learn to love her in a different way”. It shows the bonds he forms and loses, as the political situation in Argentina worsens and the power changes. We learn of the things he still blames himself for, the time spent in exile, and the deaths he takes on his conscience. All this, through dialogue and flashbacks, beautifully tied together, but distinctive in color blocks. 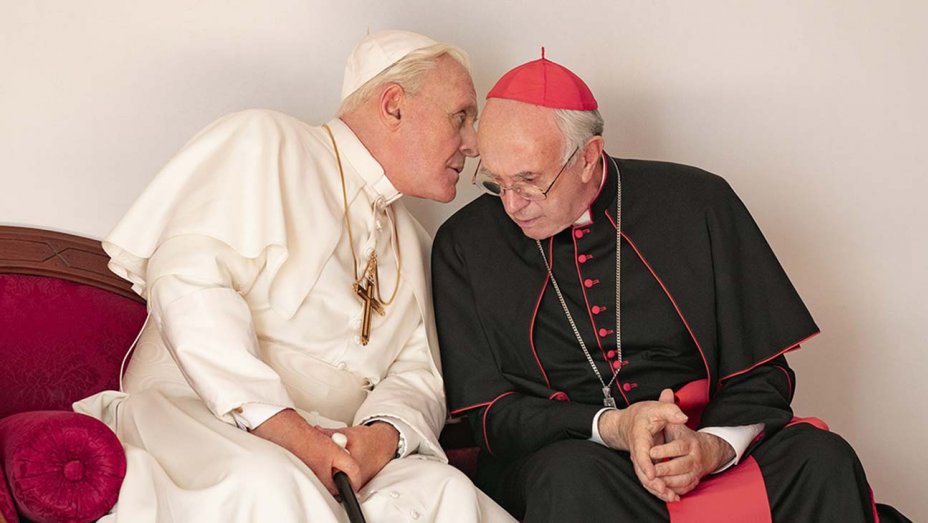 In this movie, the music becomes an actor, and as the actor’s function is to convey a message and the feelings behind the words of the characters they portray, so the music enhances each scene and imparts complexity and visual poetry.

Speaking of cinematography, César Charlone tried to move away from the characteristic imagery of religious movies and has instead split his techniques for different sections of the movie, choosing black-and-white for the flashbacks, for example. The one particular sequence in the Sistine Chapel, where wide, moving shots are combined with the intimate but powerful music, speaks of the awe that Pryce’s character feels, and the significance of the exchange that is to follow. Likewise, the garden scenes are shot in vivid colors, brightly lit, in a lively manner, to accentuate the dynamic dialogue and the contrasting views of the initial conversation.

If anything could be more powerful than the cinematography and music in this film, it is certainly the performance that the two main actors deliver. Meirelles said that Pryce was his first choice to play Pope Francis and that he arrived at this by searching the pope’s images on the internet, and finding his face repeatedly associated with that of Pryce, as many more people have underlined the likeness. Sir Jonathan completely dissolves in the role and embodies it to such an extent that it is now hard for me to believe that this is not how the Pope actually looks in real life. His co-star, Sir Anthony Hopkins, needs no introduction. He commands every scene with power and wit. I found myself repeatedly catching my breath, waiting for him to finish his sentence, afraid that if I would breathe, he would look at me and yell “Silence!”. He is distancing himself, however, from the ever-menacing image that we are used to associating with his roles, by displaying the soft side of Pope Benedict, the pain, the doubts and guilt over the burden he carries in his heart. We see the human behind the position, as he chuckles, plays the piano and looks at the smoke as he puts out the candle.

The symbolism of the rejected sacrifice is understated, but as the movie comes back to it by the end credits, it becomes a subtle message of redemption. There’s also the symbol of silence, to which the character of Pope Benedict often refers, talking about not hearing the voice of God. It is best used in the confession scene, when the Pope’s confession is muted, as one would depict an explosion. It was, for all intents and purposes, an explosion, and Jonathan Pryce’s reaction over the ringing silence speaks to the shock wave that shook the entire institution.

If one was to find any flaws in the movie, they would likely be in the truthfulness of the events and impact that the scandal had on the whole Catholic church. As someone who is not well versed in their history, nor in the politics involved, I cannot express a justified position in relation to this aspect of the movie.

Having said that, I feel that the centre of this movie was not to address the controversy or to give any answers, nor was it meant as a justification for anyone. It does not pretend to be that kind of movie. Instead, one is inevitably engulfed in the intimate stories of the two main characters, and becomes a spectator as their animosity slowly grows into respect and friendly rivalry, as the movie closes with the scenes, alternating between fiction and real-life shots, of them watching the 2014 FIFA World Cup match between their respective teams.

The Two Popes is a beautiful movie, a carefully crafted character study of two holy figures, who are, at the core of it all, humans. As Jonathan Pryce’s character says: “Truth may be vital, but without love, it is unbearable.”