Home»Reviews»Where Is the Friend’s Home? (1987) – A Multi-Layered Parable about a Virtuous Kid
Reviews

Although the predominant themes in Abas Kiarostami's oeuvre revolve around loss and poverty, his films are seldom pulled down by increasing sense of despair. The focus is always on the hope or little concern shown by one human to another. It might be a small gesture of hope, but one that has enough power to transcend the atmosphere of bleakness. 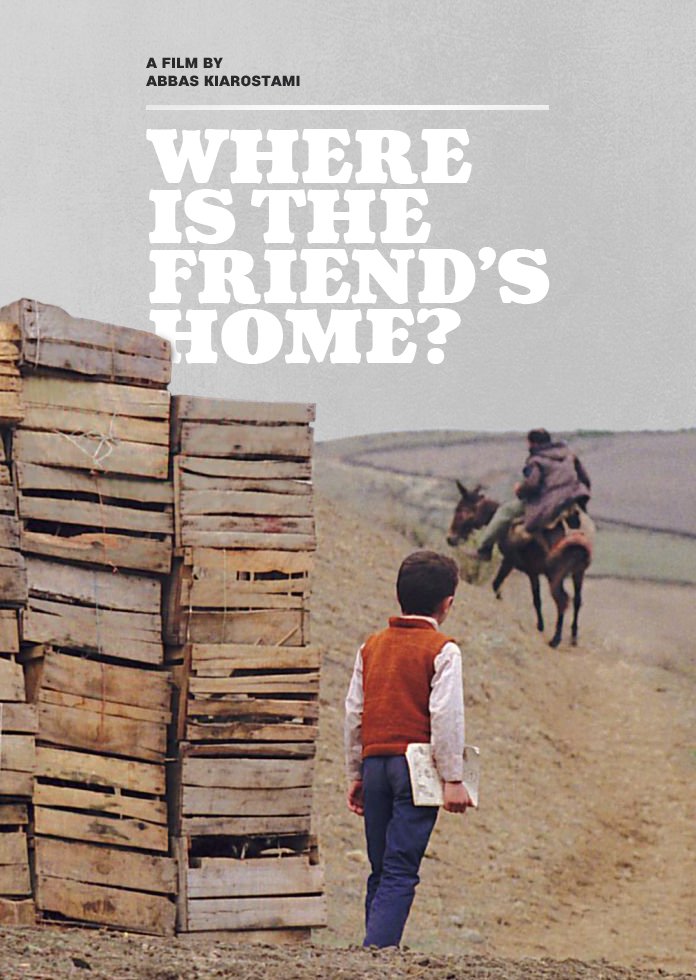 Experiencing Iranian film-maker Abbas Kiarostami’s films is similar to witnessing a great poet in action. The poet breathes life to the words, driven by intuition and after pinning down that first line, the poet gradually aligns the pathways to his poem. Mr. Kiarostami’s script, conversations, and extracted output from the non-professional actors follows the same approach. In poems, certain rhyming and repetitive effects are used, which may not be the natural form of expression, yet it achieves a sublime beauty. The Iranian director too uses abstract and repeated dialogues in order to reconstruct the boundaries of art cinema. Similar to the art of poetry or painting, there are no concrete messages; the eye of art-seekers can construe different meanings. This art of using film-form, as more than a means of telling stories, is what undoubtedly elevates Mr. Kiarostami amidst the pantheon of great film-makers. From his 1970 short film “Bread and Alley” to the last film “Like Someone in Love” (2012), every Kiarostami movie is like re-reading a soul-soothing poem: the emotions it provokes within you changes each time as per your mindset.


On the surface, Abbas Kiarostami’s works have stylistic similarities with the Italian Neo-realist movement. The director’s twenty year stretch in the non-fiction, documentary area is evident in his penchant for casting non-actors and through adoption of austere, documentary-like approach. But, Kiarostami’s movies couldn’t be confined under the term ‘social-realism’. The simple word would rob off the layered complexity, lying beneath the restrained narrative surface. Although the predominant themes of his oeuvre revolve around loss and poverty, Kiarostami’s films are seldom pulled down by increasing sense of despair. The focus is always on the hope or little concern shown by one human to another. It might be a small gesture of hope, but one that has enough power to transcend the atmosphere of bleakness. The landscapes of Kiarostami are rugged, devoid of vegetation, and riddled with mud brick structures. There are figures of patriarchal authority and most of the times, people talk without actually communicating. But a simple act of kindness seems to literally change our perspective of the landscape.

The other beautiful element of Kiarostami’s works is the self-reflexivity; the kind of reflexivity which reflects the visible boundaries between fiction and non-fiction mode. Self-reflexive anxiety is always triggered on for the director’s central characters (who more or less are the director’s alter ego). The self-reflexive and self-referential nature of Kiarostami also allows him to unearth a meaning or layer we didn’t know existed in the story. Even though Kiarostami chooses his story to be set in remote, rural places, the self-reflection also stops him from exoticizing the subjects (and questions the ethics of middle-class, urban film-makers like himself walking through rural areas for the sake of making a movie). Kiarostami’s movies are also not overtly political. We can bring our own theories and assumptions to analyze what we think of as the director’s political statements. And, we can also infer upon assortment of universal & humanist values his movies proffers (the movies provide universal emotions yet remain profoundly Iranian) . Furthermore, Mr. Kiarostami deliberately allows this space for viewers to creatively interpret. He said in an interview, “The film-maker has carried the film up to here, and now it is given up to the audience to think about it and watch these characters from very far away.” 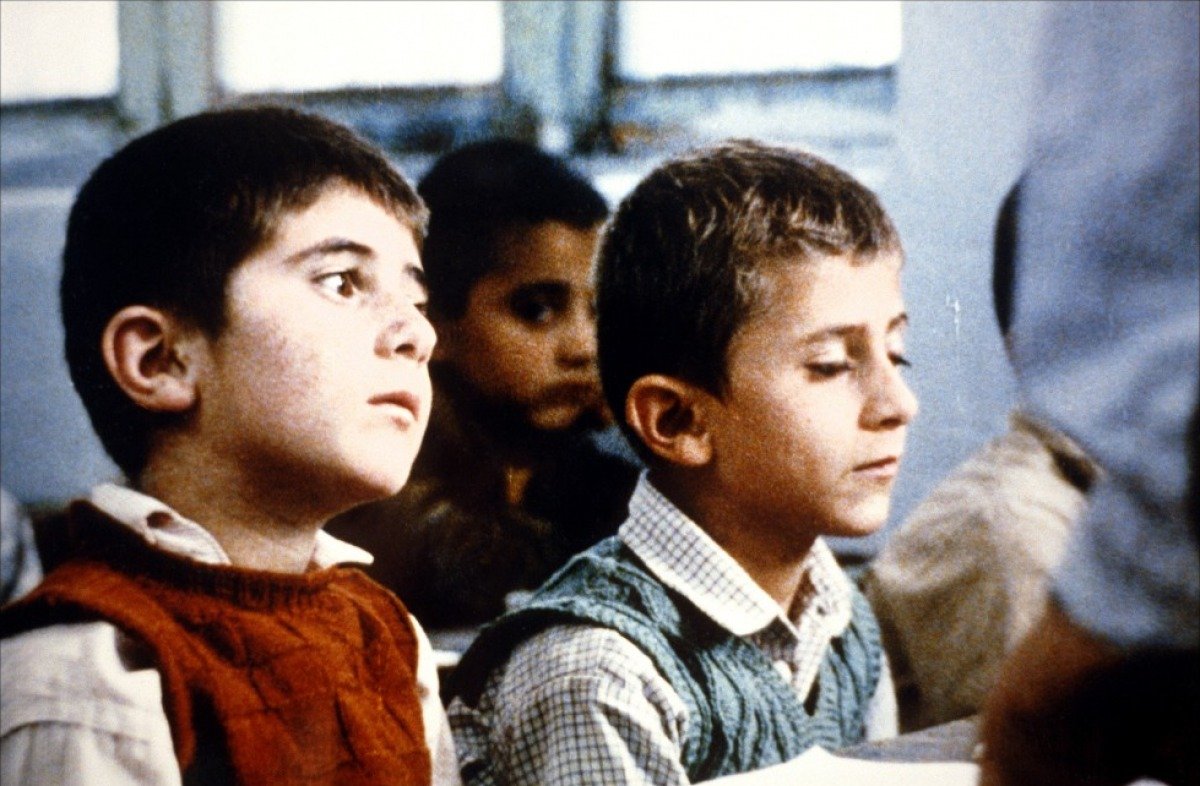 Abbas Kiarostami’s thought-provoking and unique storytelling method commenced with ‘Koker Trilogy’ – trio of films stitched together not by characters, but by a place. Koker is a village in the Northern Iran’s Gilan province. The first film in the trilogy ‘Where Is The Friend’s Home?’ (‘Khan-ye doust kodjast’, 1987) tells a very simple tale of an eight year old boy, trying to return his friend’s homework notebook. In 1990, a powerful earthquake brought immense despair to the people of this province (claimed 30000-50000 lives). The next two films – And Life Goes On (1992) & Through the Olive Trees (1994) were extremely complex blend of documentary and fiction, which focused on the deep dismay caused by the earthquake. ‘Where Is The Friend’s Home?’ opens with credits superimposed on a rusty, classroom door in an atmosphere of noisy school children. The events are set off with the entry of authoritarian teacher. The children take their respective seats and it’s a familiar kind of classroom, where anachronistic notion of discipline & homework occupies the central place than learning or gaining knowledge. We can interpret this teacher figure purely on an educational level or elevate this persona to relate with Iranian culture & politics or else simply see him as a strict teacher in a movie (the choice is left to us). The elementary task of homework itself is seen as the vital part of this hermetically sealed atmosphere of fear and oppression.

Young Mohammed Reza Nemetzadeh has not done his homework, which makes him to bear the wrath of his teacher. The boy reduced to tears explains that he left his homework note at his cousins. The teacher warns him for one last time and threatens with expulsion if Mohammed Reza doesn’t finish the homework the next day. Young Ahmad (Babak Ahmed Poor) silently watches these developments and after school we witness the gentle friendship between Reza and Ahmad (the kind that induces nostalgia). Director Kiarostami elegantly realizes Ahmad’s household atmosphere in an extended sequence where the boy’s relationship with his mother and grandmother seems to be defined by chain of commands and chores. As soon as Ahmad sets off to do his homework, he comprehends the mistake he has committed: due to the identical nature of exercise notebook, Ahmad has taken home Reza’s notebook alongside his own notebook. The boy decides to return the notebook so that Reza doesn’t get expelled the next day. But, there are two problems: Ahmad’s indifferent mother doesn’t even hear what her innocuous son is saying; and Ahmad doesn’t know Mohammad Reza’s address, except for the fact that he lives in nearby village called Poshteh.

Ahmad again and again seeks his mother’s permission to go to Poshteh, but he only receives various instructions regarding domestic chores. When she finally understands Ahmad’s problem, she casually asks him to return the notebook the next day. Ahmad, unconvinced, decides to run to Poshteh when his mother instructs him to buy bread. The path to the brief, unknown journey is superbly expressed through the long shot of a mound with a slanting track and a lone tree situated in its top. Ahmad runs around the narrow, steep alleys of a Poshteh to find Reza’s house. A fellow classmate tells him the approximate area –Khanevar district – Mohammed Reza lives in. After arriving in Khanevar district, still unsuccessful in finding the home, Ahmad learns that Mohammad Reza and his father has just traveled to Koker (Ahmad’s village). The boy runs back to Koker only to find that it is a different Mohammad Reza. Ahmad once again returns back to Poshteh, this time aided by an old man with rheumatic knees. Ahmad returns back to house only after darkness has set in. He hasn’t returned the exercise notebook and strangely we don’t see the parents punishing him for running off. May be, Kiarostami would have thought that weight of guilt Ahmad carries within himself is enough for weaving an ominous atmosphere. At school next day, forlorn Mohammad Reza sits alone waiting to be expelled as the teacher patiently checks each students’ homework. Ahmad arrives and he has done his Reza’s homework too and the authoritarian teacher approves it without any suspicion.

This 80 minute film may seem too simple to warrant a film narrative. Yet, Kiarostami’s staging – defined by repetitive rhythms and profound beauty (just like in a poem) – makes this one of the empathetic and profound depiction of childhood. The world in Where Is My Friend’s Home? is hostile and demands the submission of kids. There is complete lack of communication between the kids and older generations. Adults completely lack the interest in understanding the kids. The mother hardly listens to Ahmad and a little mistake of wearing the shoe to upstairs make the grandmother to reprimand him. On his small journey, Ahmad meets different adults to ask information about his friend’s address, but no one has decency to help him. Even if they do, it only results in utter failure (due to misunderstanding). Half-way into the movie, Ahmad, before his second trip to Poshteh, encounters his grandfather and for a brief period, the narrative shifts to the old man’s perspective. Ahmad is sent on an errand (to buy cigarettes) and the grandfather has a conversation with a neighbor, who offers him cigarette.  Rejecting the offer, the old man confides how the boy needs to be taught manners and obedience to grow as good citizen. The conversation serves as a microcosm of the closed world order, where disobeying strict orders for the sake of altruism is frowned upon. The misplaced sense of authority shown by adult figures more or less transforms into a form of plague, creeping through generations to restore burdens of tradition on young minds. 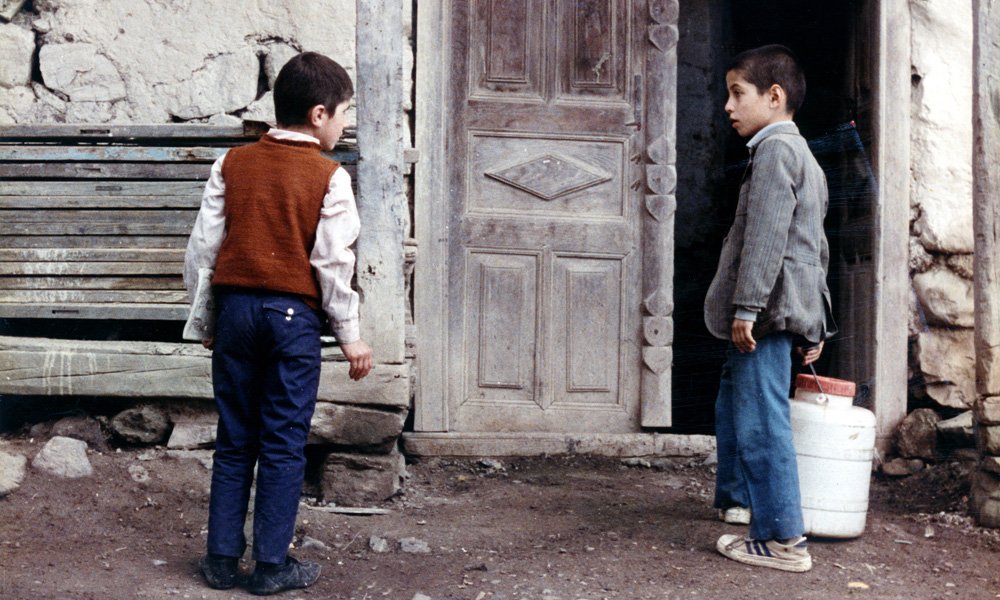 The change in this closed system, as Kiarostami sees, is possible in the hearts & minds of the young children. Ahmad’s expression of solidarity in the face of punishment and isolation is the hope that may break the vicious cycle of abusive authority. The ideas can be interpreted from the Post-Iranian revolution political perspective; although the conflicts raised here are so universal that it could be seen as a powerful humanist story. Director Kiarostami’s aesthetics, though confirms to certain standards of social realism, doesn’t fully follow the realistic approach. The real people ‘playing’ themselves is part of the realism, but more often Mr. Kiarostami inserts the abstract elements to stay true to his self-reflexive, poetic mode of film-making. The director attunes the real atmosphere to correspond to his expressionist methods. In fact, at few moments Kiarostami eschews natural form of expression to achieve aesthetic goals. The characters keep on repeating the dialogues (especially Ahmad when he repeats the question to the same person) and the intention here is to insist on the lack of communication or understanding. There are also deep symbolic resonances in the aesthetics, where certain objects or events redesigned to meet the needs of the auteur. For example, the flower Ahmad keeps in between the pages of Reza’s notebook – becomes a symbol of selflessness in the film’s final shot. Or the dark labyrinthine alleys of Poshteh with dogs barking in the distance, and a little glow of light escaping from a window — an image constructed to externalize Ahmad’s fear and distress. Or consider the shot when defeated Ahmad stays up in his room to do the homework – a gust of wind throws open the door, causing a racket outside. It’s a very subtle way of expressing Ahmad’s repressed feelings (through the storm), even though the boy seems to be calm and devoid of fear. Director Kiarostami simply takes these images of realism, passes it through his distinct self-reflexive prism, and eventually transcends it to demonstrate the testament of human spirit.

Where Is the Friend’s Home? (80 minutes) tells a deceptively simple tale of solidarity and altruism with a rudimentary narrative arc. Yet, Mr. Abbas Kiarostami’s delightfully layered aesthetics and humanism reveals profound truths about the human soul.