Sports drama often has a typical set-up or a conventional narrative trajectory. Any film dealing with team sports do offer us important life lessons on patience, dedication, commitment, and discipline. And who doesn’t like a redemptive, underdog sports story? In a troubled world that constantly reminds us of our vulnerabilities and appears to render our dreams impossible, it’s cathartic and moving when someone on-screen makes the impossible possible. The more ‘real’ these characters are the more we emotionally invest in such narratives. Gavin O’Connor’s The Way Back (2020), a small drama made by a big studio, gets all the gritty elements of a sports drama perfectly right. Of course, you’d expect nothing less from a director who made Miracle (2004) and Warrior (2011) – sports narratives with a real, messy feeling and excels in handling the familiar beats with unprecedented nuance.

Part of the reason why The Way Back subverts the usual expectations of inspirational basketball drama is due to Brad Ingelsby’s well-rounded script. He finds an interesting set of ways to present the formulaic or the allegedly cliché-ridden narrative, just like Mr. O’Connor transcends inherent sentimentality in the narrative with quiet naturalism. Adding more strength to this writer-director collaboration is Ben Affleck’s gripping performance. It’s a performance that’s so grounded in reality (also semi-autobiographic since Mr. Affleck himself was recently in rehab and went through a lot of personal struggles). In fact, he impeccably (or effortlessly) taps into the protagonist’s personal demons that you are so invested in this man’s redemption and emancipation. 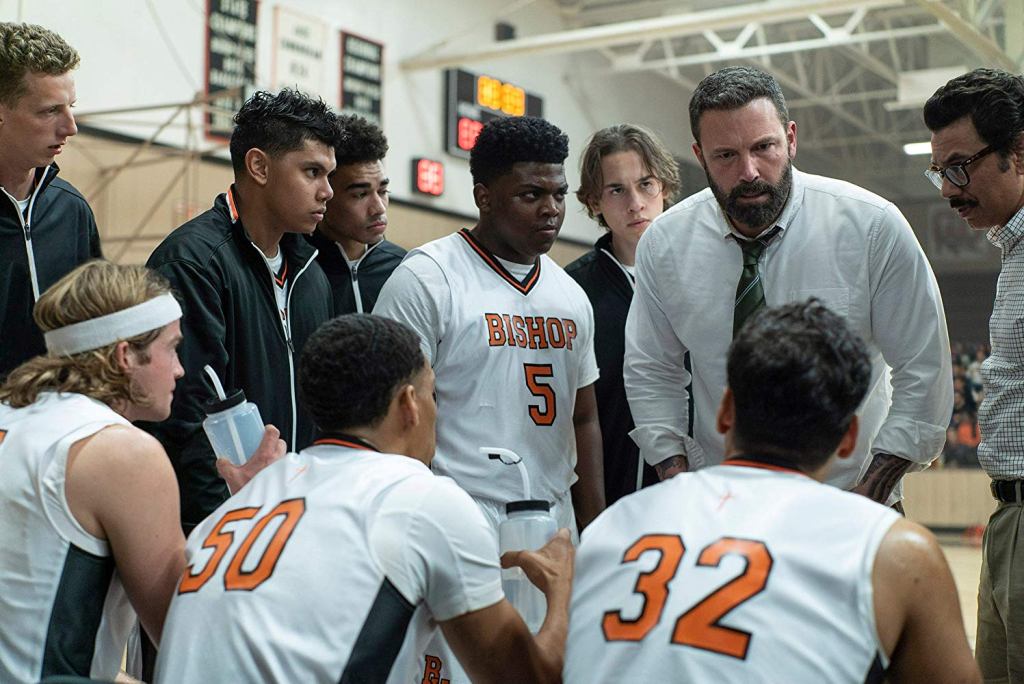 Ben Affleck’s Jack Cunningham was a high-school basketball star, now an alcoholic dealing with the deep-seated pain of a failed married relationship with a woman (Janina Gavankar) who still really cares about him (but also wants to move on). We see Jack guzzling alcohol from a concealed flask during work breaks (he’s a construction worker), during his drive back home, and even while taking a shower in the morning.  Jack has also isolated himself from his inquisitive sister, Beth (Michaela Watkins) although he maintains a playful rapport with her two little kids. Affleck and O’Connor superbly instill the lived-in feeling early into the proceedings, hinting on Jack’s painful solitude, purposelessness, and repressed emotions.

Related to The Way Back (2020): Addiction and Film: A Complex History

The attention to detail is intriguing to behold. For instance, when Jack works his way through a case of beer, placing one can at a time in the freezer to make sure it’s extra cold while drinking down one. Hence, we feel the redemption is very close at hand when he’s offered the coaching gig at the school he graduated from. He’s initially reluctant to accept the offer (preparing for the rejection speech Jack starts fixating on the aforementioned can-in-the-freezer routine). And when Jack is coaxed out of the hangover and decides to be the coach, he sees that the school’s basketball team has fallen on hard times. An algebra teacher (Al Madrigal) works as the assistant coach and the players are ragtag bunch used to losing games.

Surprisingly, Jack Cunningham doesn’t get into the coaching job firmly believing that this is a lifeline. He doesn’t instantly look up for strategies or puts together inspirational speeches. He calmly watches his team losing games from the sidelines. But things gradually fall into place and despite his foulmouthed tirades, Jack looks to turn the team around. The quiet and gifted Brandon (Brandon Wilson) gives Jack that hope. There’s a gracefully pitched scene when Jack advices Brandon to come out of his comfort zone and lead the team. In the hands of another director or writer, this scene would be a basic narrative set-up. Here it is one beautiful, little thread that runs through the tapestry of the keenly observed character study. In fact, The Way Back is a movie of small moments which slowly accumulates to eventually bestow an emotionally impactful experience.

The truth behind Jack’s tragic life is revealed in small doses. Brad Ingelsby’s script is rightly invested in adding more shades to Jack’s miserable life and addiction than firmly focusing on the predictable underdog story. Jack’s players do come together and become a determined single-unit as the prospect of them playing in the playoffs looms closer. But Ingelsby and O’Connor go beyond the supposedly intended destinations and deeply dig into Jack’s problems.  The Way Back is simply commendable for detailing how messy a journey towards redemption can be. Sport & coaching do distract Jack from his miseries. But self-pity, self-hatred, and years of accumulated rage don’t magically disappear. It acknowledges there’s no easy cure for a lifetime of emotional conflicts. Therefore, from foregrounding the emotional core of the central character, this becomes one of the moving studies on crippling grief and addiction.

Similar to Warrior, O’Conner embraces all the sports drama tropes, but his creative choices don’t push The Way Back to entirely succumb to the genre demands. There’s also enough frivolity to balance the weighty, somber narrative proceedings. Overall, The Way Back (2020) [108 minutes] takes up a formulaic story-line and puts a spin on it by turning it in to a dense character study about a man struggling with alcoholic addiction and bottomless grief. It’s also a comeback of sorts for actor Affleck whose richly textured performance hit emotional cues in an authentic manner.