(In)famous Cult director Qaushiq Mukherjee’s camera tries to find a way to get a glimpse of inside the skirt of a pass out girl after bacchanalian party. One of the Brahman guys holds a camera, while other tries to adjust the skirt of the girl to get the perfect snap. But all the effort goes futile due to their cowardice, while they shamelessly & hypocritically put the blame to their moral values owed to their ‘Brahmin’ caste. If you can’t digest this, then Brahman Naman is not for you. 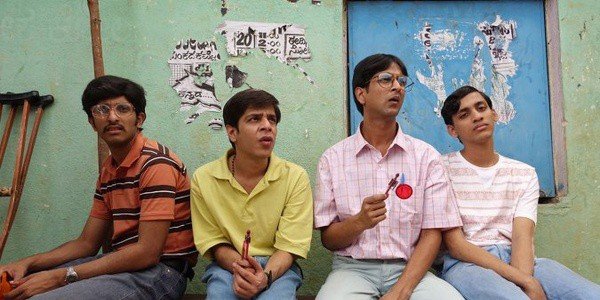 These boys are geeky, far from good looking, young quizzer boys who think that drinking is equivalent to f***ing, because they could never get laid, and that (losing virginity) is the one thing they crib most about in the film.

Recall your own old school days, when talking to a ‘good looking hot chick’ used to be a virtual sexual manifestation. Yeah, right, that is through what these guys are going, except that these boys are intelligent and you are not. Just to console their Cocoon of ego, Naman quotes, “A man of wealth has many enemies, while a man of knowledge has many friends.“

Though a little inconsistent, Q shows prowess in attention to detail and writing that is offensive, humorous, and every other line quotable. Just observe how even a mattress commercial is sexualized in Naman’s mind.

Q sets the story in the mid-80s, definitely after 1983 as we see Kapil Dev holding the World cup in one of the blink and miss scene, and he effortlessly transcends us in that era. What is even more commendable that how he avoids all the modern slang and hippie terms to render authenticity to it.

He paints the canvas of school quite traditionally balancing geeky but pervert boys group with the set of rich and cool guys acing in sports who always get the girls. They are lead by the character Ronnie played by Sid Mallya who practically plays himself and doesn’t disappoint in his role.

The only time when quizzer boys get aggravated is during the confrontation with Ronnie because Ronnie gets hot chicks which seem unattainable for them. This exasperation leads to their first jaunt to pussy-land of their locality, but soon they realize they are good for ‘Trivia’ only.

Brahman Naman is an ode to the adolescent curiosity of any generation. Curiosity about drinks, drugs, ‘Trichinopoly cigar’,  and most importantly; curiosity for sexual fantasies, s*x, and p**n.

It is a one step up from what Bollywood serves with the dash of intellectual writing bordering on being pretentious as fcuk and obnoxious enough to turn you off if you take it pensively.

In one of the scenes, our three nerdy rascals lecherously ogle at voluptuous and beautiful ‘Christian’ girl Rita (played by Subholina Sen), while Alabama Song (Whiskey Bar) by The Doors is played in the background. Q’s vision of 80s teenage is more or less similar like ‘Rita’; It looks raunchy from its outset, but we don’t get to know anything beyond that. But, thankfully his selection of the soundtrack is phenomenal in Brahman Naman.