I hate zoos. I don’t know what’s so joyful about watching the sad-looking bunch of animals in captivity. Of course, we see people bringing up the biodiversity conservation debate while talking about the necessity of zoos. But that’s just a myth to white-wash our race’s violent disruptive effort on nature. Moroever, observing the families (including their kids) in the zoo, I have never understood the educational merits of such places, and feel that these people will ever learn to share our planet with other living beings. Why don’t you all watch David Attenborough’s documentaries instead? Provided, if you really wanna learn about animals in their natural habitat, rather than just click selfies after hitting at the glass enclosures. Few minutes into Netflix’s new true-crime docu series Tiger King: Murder, Mayhem, and Madness (2020) – by Eric Goode and Rebecca Chaiklin – we get to look at all these eccentric, abominable creatures running a lucrative operation through exotic animals breeding while presenting the conservation bullshit as the window dressing.

Nevertheless, Tiger King isn’t exactly about how wealthy showboats and narcissists smuggle the endangered, exotic species of wild animals from their natural habitats just so a bored idiot somewhere else can say, “Aw! It’s so cute”, and snap a picture. It rather starts off as a treatise on the psychology of people who gets off on caging big cats and owning them like pets. And eventually Goode & Chaiklin’s documentary focuses on the persona of the titular character, a flamboyant, maniacal, and a gay Oklahoma zoo owner named Joe Exotic (real name: Joseph Allen Schreibvogel – although his surname keeps changing). 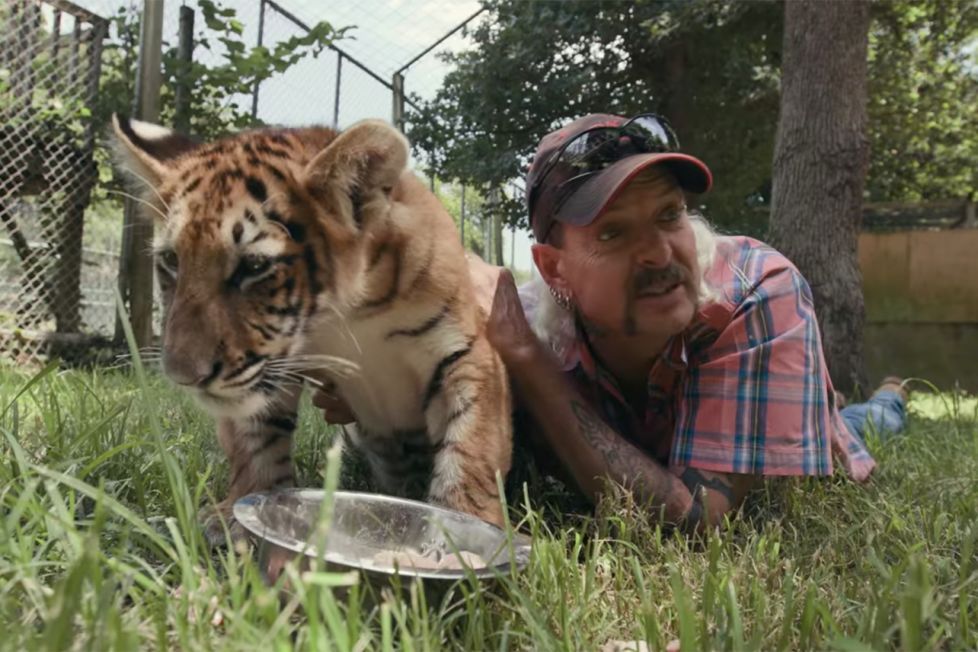 Furthermore, when the docu-series starts off with the taped voice of Joe speaking from prison, you can guess it’s more or less a rise-and-fall narrative. In fact, Joe is got to be one of the wackiest personalities involved in the exotic animal business that his behaviors are alternately creepy and darkly humorous. “The big-cat people are backstabbing pieces of shit”, says one person early in the series. It looks like a fairly valid assumption because these people just start buying up a few acres in the countryside and start a wild animal zoo and some just cage tigers in their backyard. The pliable nature of their morality is just intriguing to watch. A statistic says, between 5,000 and 10,000 tigers live in captivity in the US than the fewer than 4,000 tigers living in the wild. Tigers are just symbols stuck in the unfathomable depths of these personalities’ egos.

Related to Tiger King: The Trials of Gabriel Fernandez [2020] – A Shocking Case of Child Abuse, Murder and Institutional Negligence

Joe Exotic was an animal enthusiast, then a zoo-keeper-cum-showman, and eventually branded himself as the foul-mouthed, gun-toting, mullet-haired redneck. Film-maker Eric Goode has spent five years following around Joe and the man is just like series’ narrative trajectory: utterly unpredictable. Joe seems himself as the ruler of his animal kingdom, established in Wynnewood, Oklahoma. There seems to be many other similar rulers in different state of US. Someone like Bhagvan ‘Doc’ Antle is much smarter in handling the business side. He doesn’t just speak; he keeps selling an idea of himself. After the initial meet with Antle who keeps providing cues, Goode says off-camera, “I like that ‘Doc’ is better at directing than we are.” Furthermore, Antle is not just good at amassing bunch of rare species and wild animals, but also adept at turning his animal trainers into wives/girlfriends (an alleged sex cult).

Reading about ‘Doc’ Antle it seems the man has done some really good deeds (despite all the hogwash), but in the series his presence makes you feel that you just wanna wipe that smirk off his face. All of these rulers owning big-cats have formed a strong alliance and do all the shadowy things, primarily involving cub selling.  The fairly profitable zoo venture and animal entertainment-shows probably gives them the much-needed celebrity status to dress up their darker schemes.  Joe Exotic is crazier, but since he is the central focus here the series gets a better handle on his character.  It’s more layered than the presentation of Mr. Antle.

Joe, despite being the egomaniac, provides sanctuary to misfits and convicts who although work for next to nothing is loyal to Joe and find inner-peace in working with the animals. It’s just very hard to stop Joe from talking. He speaks on-camera about everything, from his love life with two husbands (who later turns out to be ‘straight’) to his up-close encounters with tigers. But his one big favorite topic is ranting on his nemesis: Carol Baskin, founder and CEO of Big Cat Rescue Group whose life mission is to put an end to the for-profit zoos holding tigers in captivity. Declared as the ‘Mother Teresa of Cats’ by her husband Howard Baskin, Carole works with PETA and she herself owns a big cat sanctuary in Florida (animals supposedly rescued and living in natural environment).

While both Baskin and Joe have big cats in their land and conduct tours, Baskin insists that her intentions are largely different from Joe’s. We get a tour of her house (entirely decked out in cat décor), see her online shows. The way Goode & Chaiklin frames Baskin, it feels like she’s part of the weirder spectrum that includes Joe, Antle, and others. I mean we all know how PETA and the so-called animal rights activists can be the condescending pricks and biggest hypocrites on the planet. Joe says Carole just runs her own business in a different way. Yet there’s not much evidence offered to depict how exactly she makes money, apart from theorizing on a ‘labor camp’ working style.

Then the series takes a big leap and investigates Carole Baskin’s allegedly shady past. It involves her multi-millionaire husband Don Lewis’ mysterious disappearance (in 1997). The urban legend created by people like Joe is that Carole fed Don to his tigers, once she got hold of his decision to divorce her. Don Lewis’ first wife and daughters also suspect foul play even though the local police detectives didn’t any evidence whatsoever to support that claim. Nevertheless, since she profited a lot from Don’s uncharacteristic disappearance, and since the directors repeatedly show us a clip of Carol’s smile (which in slow-motion screams ‘evil!’) we feel Carol has her own collection of personal demons. But nothing actually comes out of this investigation. 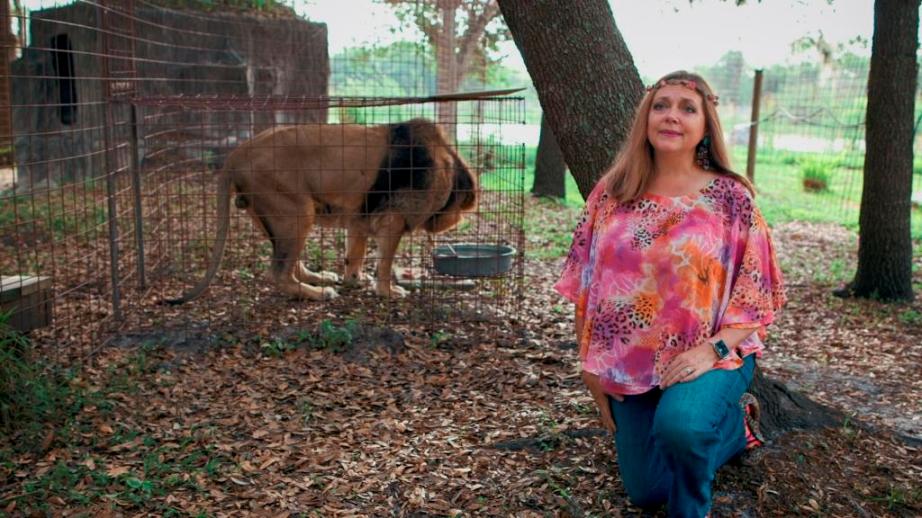 This particular episode was a lazy detour and even without insisting on how this cat-lady can be a murderer, I don’t have any respect for the Carole Baskins of the world. All they are interested in is building their own utopias and never talk about preserving wild animals in their natural habitat. Tiger King gets one thing perfectly right, i.e., they all are the same. As one zoo worker says, “Everyone involved is a so-called animal advocate. Not a single animal benefitted from this war.”

It’s just that the Tiger King became too crazier that he’s banished with a punishment.  Joe Exotic is serving a 22-year prison sentence for hiring a hitman to murder Carole Baskin. The story of how Joe planned murder with two felons and how only he ended up in prison is one of those ‘stranger-than-fiction’ scenarios. Anyway, the ending suggests that the animal kingdom is still far from being saved from these demented super-rich people.

Tiger King, like any other Netflix docuseries, is very addictive and the twists keep coming. At times, Goode simply runs out of the narrative’s main focus to just keep intact the edgy feeling. The documentary finally does comment on how the animals don’t matter at all in this multi-million dollar feuds. But it would have been intriguing if Goode concentrated more on the animals and exposed the financial aspects of this illegal trade. It surely is binge-worthy; a perfect escape from our corona-addled reality. Nevertheless in the long-run, Tiger King will be just as forgettable as the showmanship of Joe Exotic.