'Wild Wild Country' chronicles the incredible volatile stand-off between the members of the free-love preaching Rajneeshpuram commune and the conservative residents of a sleepy Oregon town. This is an event that has been thoroughly captured by local and national news agencies of the time, although it might have faded from the people’s collective memory. But even if you are familiar with the subject, the series has got quite a lot of jaw-dropping expose.

Ever since the investigative journalism podcast ‘Serial’ gained prominence, the limited true-crime documentary series has boomed exponentially. From ‘The Jinx’, ‘Making a Murderer’ to ‘O.J. Made in America’ (won an Oscar) and ‘The Keepers’, these subsets of nonfiction have brought to light the most riveting and twisted real-life events (Netflix has good selection of these true-crime documentaries, some produced by themselves). In fact, this current pop culture fascination with true-crime works reminds us of the old adage: ‘stranger than fiction’. The sub-genre had entirely captured the imagination of its viewers that it even got its own series spoof titled ‘American Vandal’. Adding to all these crazily unique American stories is six-part Netflix documentary series (produced by Jay and Mark Duplass) Wild Wild Country (2018). Directed by film-making brothers Chapman and MacLain Way (‘The Battered Bastards of Baseball’), the doc series has got all the perfect ingredients to be the next eye-opening TV event. It’s a story about religion, generational divides, cult, guns, wiretapping, abuse of power, immigration fraud, conformism, etc. 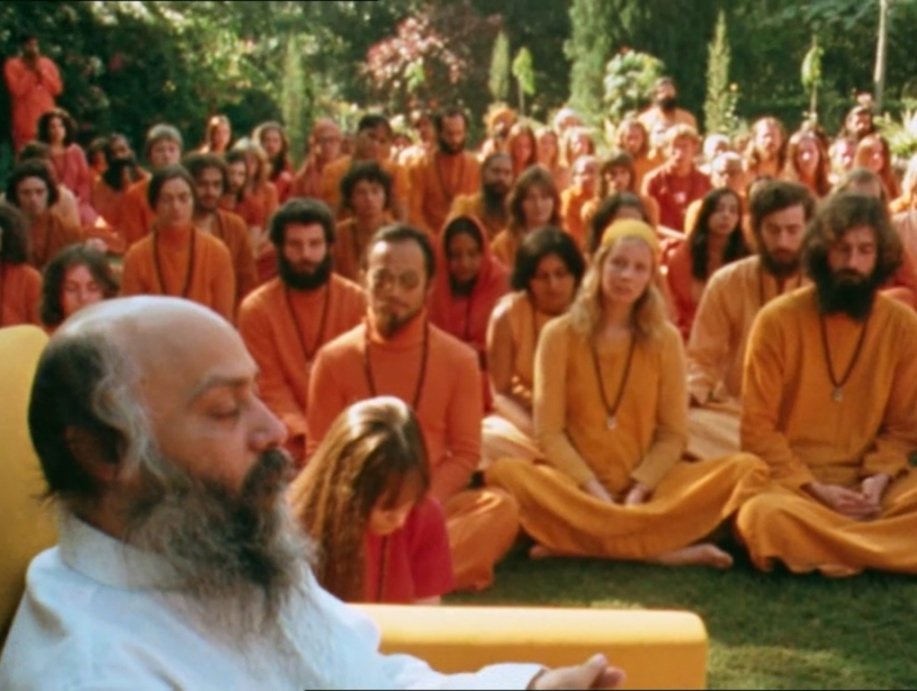 Wild Wild Country chronicles the incredible volatile stand-off between the members of the free-love preaching Rajneeshpuram commune and the conservative residents of a sleepy Oregon town. This is an event that has been thoroughly captured by local and national news agencies of the time, although it might have faded from the people’s collective memory. But even if you are familiar with the subject, the series has got quite a lot of jaw-dropping expose. Moreover, it’s evenhanded, objective treatment of the subject allows the viewers to look into a multitude of disputative problems Americans are still comprehending (especially religious fanaticism and clash between different belief systems). Compared to other stories about cults and cult-like groups, the Rajneesh movement has been more thoroughly documented. Directors Chapman Way and Maclain Way have primarily gained the wealth of archival footage through the Oregon Historical Society (comprising of nearly 300-hours of never-before-seen footage). They also gained access to some videos recorded by the Rajneeshees.

The first episode opens with the arrival of Rajneeshees in their all-red/maroon outfit with bright smiles, playing flutes and dancing. To the bewilderment of the dazed residents of Antelope, Oregon, the followers unroll a red carpet for their Indian guru Bhagwan Rajneesh to walk on, when he steps out of one of his Rolls-Royces. Later, it jumps to India, briefly focusing on Bhagwan Shree Rajneesh’s phenomenal rise, which allowed him to set up an exquisite ashram in Pune and slowly gain a devoted followed in the West (during the 1970s). Bhagwan Rajneesh aka Osho tried to create a New-Age movement, espousing ideas of sexual freedom, compassion, and meditation. Many of his followers, known as ‘sanyasins’ (later as Rajneeshees) came from the cream of the cultural and economic crop, partook enmasse in distinct meditation and therapy sessions. It’s the kind of perfectly marketable spirituality that’s still thriving through retail books and international meditation centers. Bhagwan’s long-time dream of building a utopian city for his followers didn’t come to fruition in his native country, as the ashram was persistently scrutinized by the Indian authorities.

In comes Ma Anand Sheela (or Sheela Silverman), the new secretary or second-in command of Rajneesh movement, who promises her guru to fulfill his vision. Sheela, who is interviewed at length, describes her initial meeting with Rajneesh (in late 1960s) when she was 16 years: ‘Tears rolled down by cheeks. If I had died in that moment, I would have been happy. My life was complete’. She was instrumental in the purchase of the 64,000 acres of land in Wasco County, central Oregon to build a self-sustaining city to support at least 10,000 ‘sanyasins’.  This vast ranch was situated 19 miles away from the tiny town named ‘Antelope’. The population of Antelope is less than 50 and it mostly comprises of elderly Christian retirees, whose much treasured tranquility were thought to be invaded by the red-robed sanyasins. The sheer scale of development of ‘Rajneeshpuram’ by Sheela was phenomenal. It’s an independent metropolis, fitted with its own law enforcement, mail service, and pizza parlors. When long-time residents (including Bill Bowerman, the co-founder of Nike) of Antelope opposed the expansion through legal battles, Sheela started creating ruckus by buying few properties in the small town and desired to take control of its municipal government through elections.

The elderly Oregonians were now completely frustrated by the arrival of Rajneeshees, the sounds of their orgies and other sexual rituals adding much distress to the god-fearing residents. After winning the seats in city council and mayor-ship, the Rajneeshees encroached Antelope and now set their sights for Wasco County seats. By this time, the conflict between ranchers/farmers and the Rajneeshees turned more intimidating, starting with the bombing of sanyasins’ hotel. This led to amassment of assault weapons and to weapons training on Rajneeshes’ part. But what’s more chilling is Sheela’s political maneuvering (by importing busloads of homeless people in an effort to gather enough voters to take control of Wasco County’s entire legislature), combative TV interviews, and the unbelievable acts of biological terrorism. Amidst all the chaos and persecution, hangs the threat of all this hate ending up in bloody violence. Apart from the engrossing modern-day interview of Sheela, there are other interviews involving prominent Rajneesh followers, including: Jane Stork aka Ma Shanti B, an Australian middle-class wife, who was later charged with attempted murder; and Swami Prem Niren aka Philip Toelkes, Rajneesh’s teary-eyed lawyer.

Like ever other great documentaries, Wild Wild Country concentrates on the pivotal figures of the series without fully passing judgment on any of them and leaves it up to viewers to draw their own conclusions.  Earlier, there are moments when we feel the Antelope residents are purely acting out of bigotry and fear. Their interviews recorded in old VHS tapes doesn’t differ much from the contemporary speeches, calling for hard-line stance to keep out immigrants and religious minorities. And, at times the wholly devoted Rajneeshee faithful doesn’t sound crazy or harmful and their arguments seem entirely rational. This kind of fascinating juxtaposition often happens in the documentary, although the immaculate details of Rajneeshees’ horrifying conspiracies speak for itself. The interviews are well limited to range of subjects and slowly build a sense of intimacy between the subjects and the viewers. Furthermore, the artful framing in the interviews (fulling encompassing the subjects’ environments) brings little insights into what kind of person these people are. The orchestral arrangements and the music by Brocker Way (the directors’ younger brother) are incredible, diffusing different thematic arrangements for each subjects and incidents on-screen.

Wild Wild Country is less about Osho and more about Rajneeshee faithfuls, who shacked with assault rifles and bio-weapons. The guru himself remains something of an enigma. For those unaware of Osho, it’s hard to understand his charisma or teachings, through the little footage centered upon him. There are also no answers to why thousands flocked towards this openly materialistic guru (with a million-dollar diamond Rolex and the largest collection of Rolls-Royces in the world). While it provides a detailed insight into the Rajneeshees misdeeds, there’s not much examination of the culture that led to so many young men and women to flock to Rajneesh. In fact, we don’t get a sense of how the thousands of people lived in these cult-like surroundings. Of course, the docu series perfectly serves up the narrative thread of ‘cult-gone-wrong’, and helping the makers in this regard is the multi-faceted Ma Anand Sheela, the most vehement and outspoken face of the Rajneeshpuram community. From dropping a grim joke in the opening passages to the final punch-line, Sheela is the most fascinating character in the series. Almost all of the subjects in the documentary are unlikable, people who describe the ‘other’ side as one-dimensional and malevolent. But yet the life journey of Sheela and Jane Stork is far more enticing and continuously defies expectations. In many ways, Ma Anand Sheela is the perfect anti-villain whom no great fiction-writer could actually create. As a woman with no moral compass, remorse, and empathy, Sheela clearly comes across as a dangerous person, who makes us wonder what kind of nightmare she would have cooked-up, if only her atrocities succeeded or went entirely unnoticed. Yet while looking at her old interviews and current heated statements, I can’t help but admire this woman’s tenacity and craftiness.

Lying beneath the eye-opening revelations are the broader focus on the themes of eternal clash between church and state, the establishment clause, and the corrupted nature of unchecked power, which are as relevant as ever. The unstoppable force of religious proliferation and false prophets is further driven home by taking a look at who took over the land left by Rajneeshees: Young Life, a ministry that hosts camps for teens who want to devote themselves to the teachings of Jesus Christ and preaches abstinence. More over, Wild Wild Country doesn’t simply pertain to American political and socio-cultural behavior. The series shows what would happen when two groups, ingrained with their own belief system, fail to come together or at least communicate with each other. Even three-plus-decades after the chaotic events, the two sides still completely refuse to see each other’s perspective, which adds darker note than any effective dramatization. Altogether, Wild Wild Country (2018) is not only an enthralling study of the strangest chapter in American history, but also a fine portrait on the vindictive and strictly territorial nature of human race.