Inspired by Svetlana Alexievich’s “The Unwomanly Face of War: An Oral History of Women in World War II”, Beanpole (Дылда) offers a rare, intense post-War drama from women’s perspective, examining the tribulation in finding the meaning to life, without collapsing under the emotional mushiness and victimising the sufferer.

Unlike a lot of other PTSD drama, especially the American films, that overtly lay bare the psychological and physical consequences of war, and starting over the life from scratch, Beanpole avoids the genre trope to offer a subtle, inward experience that is overwhelmingly melancholic but not hopeless. Only in his second film, Kantemir Balagov, who studied under prolific filmmaker Alexander Sokurov, displays a matured command over his direction and writing that is restrained, with a strong undercurrent of disturbing brutality and shock. For such a piercing subject matter, he neither romanticises with miserabilism nor slips in a contrived subplot to pull the heartstrings. 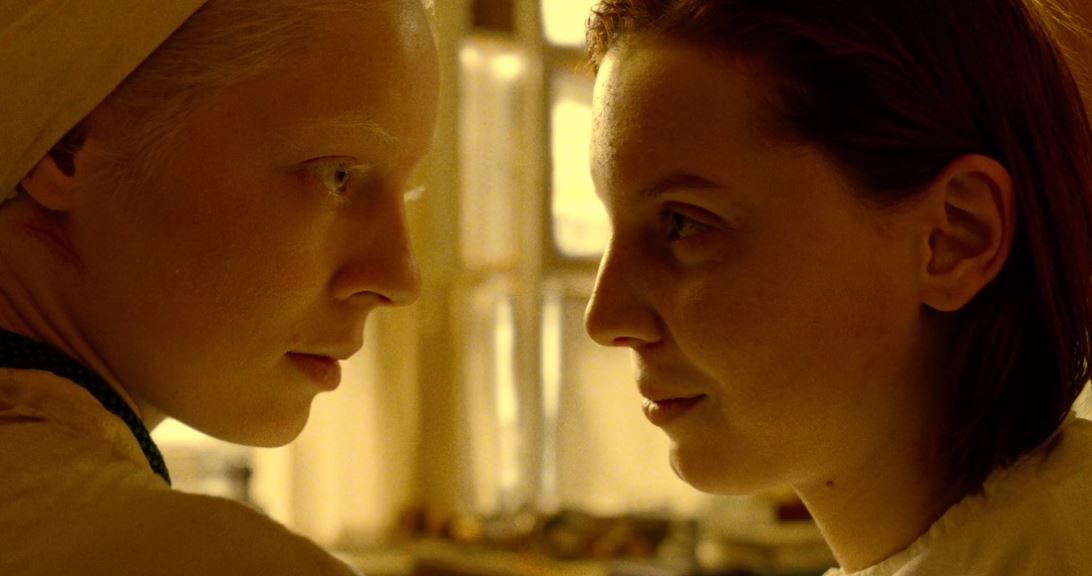 Beanpole opens to the sound of heavy breathing on the black screen reading opening credits, leaving us to speculate the cause for such distress. The anticipation gets unnerving. The visuals then open to a tall height, slender and fragile woman, Iya (Viktoria Miroshnichenko) who froze in the laundry ward of the Leningrad Hospital. Her pale skin, empty gazes, scrawny body and sunken eyes are evidence of the spectrum of tragedy she has seen in her young life.

Her paralytic PTSD fits have invalided her on the war frontline. She starts over her life as a nurse in a Leningrad military hospital that reminds her of the horror of World War II. But it also proves to be a healing mechanism for Iya, as after witnessing several deaths on war frontline, she sees a flicker of hope in nursing soldiers back to life. She finds meaning to her existence.

Iva’s friend from the frontline, Masha (Vasilisa Perelygina) returns to her after the end of World War II and secures a job as an attendant in the same hospital. Contrary to gullible and fragile Iva, Masha is commanding in nature with a plastered smile and fierce eyes. Their life throttles in a downward spiral towards the insurmountable despair when Iva’s post-concussion syndrome casts reversible damage that changes their course of life, their friendship, their love forever.

The only shred of hope having slipped away put them back in a traumatic condition. They show muted resignation to their latest trauma and deal with them differently. Iya’s suffering is more internalised that manifests itself in post-concussion syndrome, but Masha deals with it explicitly that makes the situation worse for her. When Masha sees no end to her incessant pain, she emotionally wriggles Iya, and that eventually drives them apart.

Balagov depicts their emotional wretchedness without calling for attention. Cinematographer Kseniya Sereda’s rich but tonally soft colour palette adds a layer of artificiality and warmth to the setting that helps to absorb the overpowering bleakness of drama. As the Russians try to build their life back from grief and despair, Balagov crafts the narrative with subtextual compassion and love for both the characters who navigate their lives through the ambiguity of complex emotions, morality and humanity.

In the Shadow of the Moon Netflix (2019) Review: Jim Mickle's Weakest