Netflix original French horror series, Marianne (Season 1) received the stamp of approval from popular horror novelist Stephen King which naturally pushed it to the top of my watch-list (“If you’re one of those sickos–like me–who enjoys being scared, MARIANNE will do the job…It also has (I say it with all due modesty) a Stephen King vibe”, King tweeted). The premise of a famous author returning to her small coastal town to confront an evil, preternatural spirit after reconvening with her adolescent friends (you could find themes of nostalgia and redemption) obviously sound to be under the strong influence of the American horror novelist. Only last year, Netflix released the horror series The Haunting of Hill House which although was asserted as an adaptation of the acclaimed Shirley Jackson novel felt more like a riff on King’s works. Recently, a movie adaptation of Alvin Schwartz’ short story series Scary Stories to Tell in the Dark (2019) was made, which also took a leaf out of Mr. King’s youth-featured creepy stories.

Similar to Netflix’s weird Euro-creeper Black Spot (2017–), Marianne gets its atmosphere and scares right. It revolves around Emma Larsimmon (Victoire Du Bois), a young best-selling author, in her early thirties, who has written a horror novel series based on her nightmares. Emma has created Lizzie Larck, the heroine who relentlessly hunts down the malevolent spirit Marianne. During the book’s publicity tour, Emma announces that she’s done with the series, and even drops a spoiler that she has killed Lizzie Larck by the end of the book. Emma wants to move on and write about more serious things. Nevertheless, a disconcerting meeting with a childhood friend named Caroline (Aurore Broutin) during the book signing at Paris, and later the same friend’s upsetting suicide forces Emma to visit her parents in the gloomy seaside town of Elden. 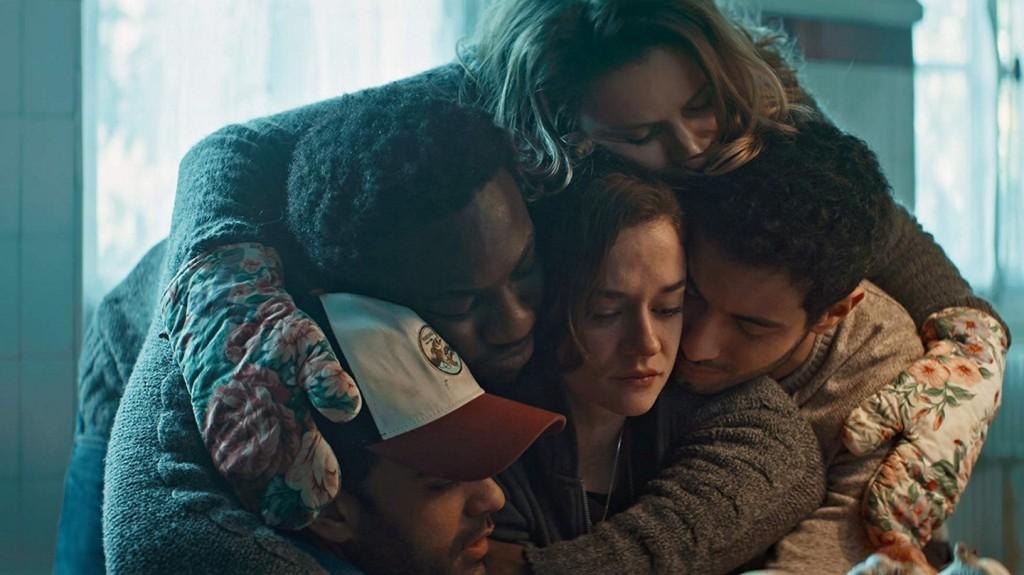 For years, Emma has avoided the town and her well-meaning parents (Corinne Valancogne & Pierre Aussedat) for reasons that are gradually revealed. Now she revisits her place, dragging alongside the anxious assistant, Camille (Lucie Boujenah). Emma reconnects with her adolescent friends with whom she had no contact after moving away from the town at the age of 15. Emma also wants to meet Caroline’s mother who is alleged to be possessed by Marianne. Yes, the titular evil witch seems to be more than a vivid imagination of Emma Larsimon.

The history of Marianne dates back to 1500s. She’s said to have made a pact with the demonic spirit (Beleth) and thanks to a failed ceremony carried out by an incompetent Catholic priest, her spirit continues to haunt the town’s residents. Now the evil force has lured back Emma to Elden and threatens to kill her family and friends, if she doesn’t keep writing about Marianne. Emma comes to understand that it was her fiction which has given Marianne to manifest in real world and claim lives (without her knowledge). As one could expect, things get worse when Emma stubbornly stands by her decision to not write.

Marianne starts off pretty well. Victoire Du Bois effectively embodies Emma, whose life is in absolute mess and remains awful to almost everyone in her life. She doesn’t seem to have grownup (stuck in the adolescent phase). Initially, we find fault with her popularity and mode of writing. Slowly, the episodes reveal a more traumatic past that dictates her alleged apathetic behavior. The early episodes have got a grim sense of humor, some of which mostly arises out of Emma’s reckless, idiosyncratic nature. Samuel Bodin, the series creator, has done a good job with trickily balancing between jump scares and dark comedy. Like all unsettling stories set in a small-town, Bodin perfectly uses the atmosphere — a lighthouse, an abandoned school, a spooky old house — to build his scares.

The biggest strength of Marianne, however, is the portrayal of titular character by Mireille Herbstmeyer. The big eyes and creepy smile of the old lady feels more sinister than many of the perfectly paced jump scares in the narrative. In fact, once this actor’s character is pushed to the background, the series tries its best to scares us, albeit never reaching the frightening power of the old lady’s subtly unnerving gaze. Bodin does a fine job in incorporating lot of the genre tropes, although in the later episodes I felt the mysteries (or twists) were too predictable and derivative. Altogether, Netflix’s Marianne doesn’t set any new benchmark for horror series. Yet, it’s meticulously crafted and well-performed to worth the binge-watch.

Just Like That (Aise Hee) [2019]: 'MAMI' Review - The Unattractive Reality of Small-Town Existence