The narrative revolves around vulgar, obnoxious, and foolhardy live-streamer named Shawn (Joseph Winter). Due to some controversial prank, Shawn is expelled from the internet spotlight. In other words, he is ‘cancelled’. Deadstream focuses on Shawn’s daring and desperate attempt to win back his sponsors and viewers. For his latest escapade, Shawn chooses opts for a very basic gimmick: spending a night alone in a alleged haunted house. Soon, his attempts to feed on internet viewership are thwarted by a malevolent spirit which craves to feed on Shawn’s soul.

The write-up will now further delve more into the plot points of Deadstream, particularly its ending. So readers who’d like to keep their movie experiences fresh can refrain from reading the upcoming portions.

Shawn’s Desperate Attempt to Rescue Himself from Internet Infamy

Shawn Ruddy might not have had PewDiePie-size influence among live-streamers. But he had earned a steady set of fans and followers. He hosts a show called Wrath of Shawn in which he’d force himself to face his worst fears and live-stream in a Twitch-like platform called Liivid. This includes doing Jack-ass style stunts like plunging into roaring rapids or sledding down snowy slopes, etc. In one of his cruel and insensitive antics, Shawn smuggles himself across the Mexican border. However, the man-child’s fame came crashing down when Shawn pulled the most stupid prank by hospitalizing a homeless man after a bum fight. 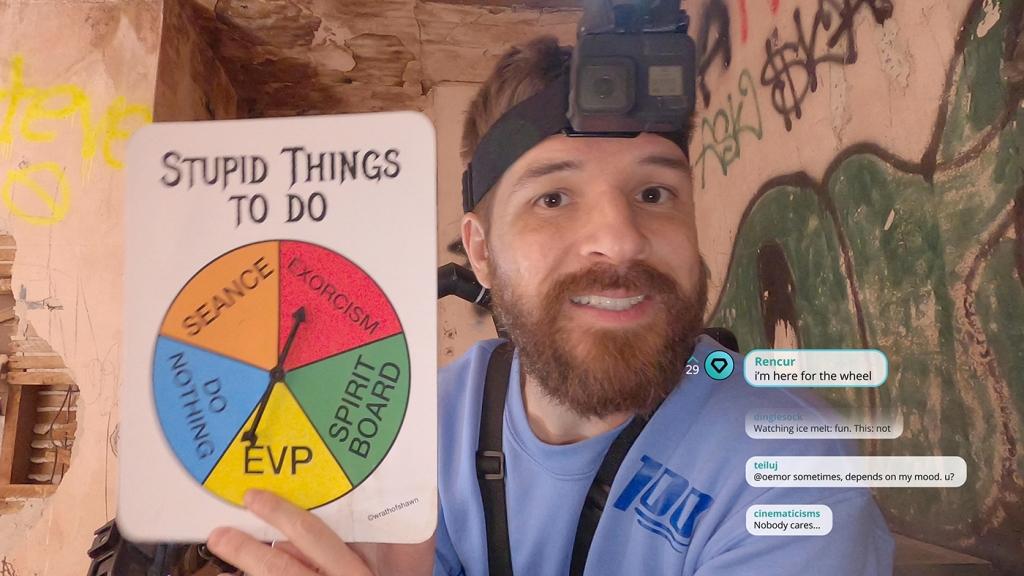 The reasons for Shawn’s infamy in Deadstream are smartly revealed later in the narrative. But initially, in the rapid-fire prologue we learn everything that’s to learn about this buffoonish internet personality. In order to gain back his space in the digital scape, Shawn decides to conquer his fear of ghosts. He vows to spend a night alone in a spooky and crumbling farmhouse called ‘Death Manor’. Using an assortment of electronic equipment and gears, including motion-activated infrared cameras, Shawn prepares himself for the big show.

What Shawn does Before Livestreaming his encounter with the dead?

Shawn begins his Livestream by making an elaborate show out of locking himself up inside the haunted house. He takes the spark plugs out of his car and throws them into the nearby bushes. Then he locks himself inside the Death Manor and throws away the key. Since the movie is titled Deadstream, we know that Shawn would later regret his actions. At the same time, there’s dark humor in the way he dramatically looks at the camera in order to explain how he has denied himself an easy way out.  There’s also cheeky self-referential humor as Shawn emerges with a T-shirt that roughly reads, “A beloved internet personality disappeared in an abandoned house while broadcasting a live event. The footage was found a year later.”

Shawn then goes about mounting tiny cameras on different areas of the dilapidated home. First, he positions cameras on the three places where paranormal activity was allegedly detected by the inhabitants and so-called researchers. The master bedroom, nursery, and bathroom are those three eerie spaces. The creepy and the banal co-exist in Shawn’s Livestream show. On one hand, the unsettling house sounds plus Shawn’s shaky selfie, POV cam pushes our eyes to hunt for any oddities in the darkest corners of the house. On the other hand, Shawn periodically checks in with viewers, whose comments range from cheesy, moronic to snarky and outright toxic.

In a micro-budget indie horror like Deadstream, little details matter a lot. Therefore, one could appreciate the effort that has gone behind concocting this deluge of live stream comments. ‘This is so fake!!’ screams a comment and such self-mocking banter manages to evoke a chuckle.

Where Are You Mildred?

The Death Manor is supposedly haunted by Mildred, a 19th-century poet whose suicide seems to have commenced the house’s notorious bloodthirsty streak. After nearly a dozen deaths in the manor’s premises, the stories of haunting spread throughout the area. As a result, no one has inhabited the Death Manor since the 1950s. In Deadstream, Shawn not only walks us through the legacy of the haunted house but also plays video clips and audio files recorded by ghost-hunters and paranormal researchers.

Shawn has armed himself with a cross, holy water, salt, and an Ouija board.  In order to arrest the wavering interest of the viewers, he thinks of provoking the spirits through séances and summoning. However, Shawn’s goofiness is soon replaced by terror as he witnesses and feels the presence of an actual ghost. We feel like one of Shawn’s apathetic viewers and want to type ‘Told you so!!’ Moreover, the Winters throw in a surprise element with the arrival of a woman named Chrissy (Melanie Stone). She seems to be a fiercely loyal subscriber of Shawn’s antics and had obsessively tracked down the house’s location to appear alongside him.

Though Shawn might be breaking his chief rule by allowing Chrissy to stay with him, Shawn is swayed by his viewers’ approval and he validates the presence of a ‘strong, independent woman’. Nevertheless, the maniacal glint in Chrissy’s eyes says there’s more to her than being a ‘subscriber’. Later, we learn that the woman is an ‘influencer’ of sorts, and her real name is Mildred. Similar to the spooky first-person horror game Granny, Shawn attempts to free himself from the influence of Mildred and her group of grotesque ghosts. And what more can a jaded viewer ask for when a Livestream turns into a deadstream?

What Was the Chant that Supposedly Sealed Shawn’s Fate?

After teaming up with Chrissy, Shawn stumbles upon a secret basement that withholds a chest box of Mildred’s stuff, including her note of poems. He takes it with him, though his first impression of the poems isn’t positive. Later in Deadstream, when Shawn messes with the Ouija board in order to communicate with the child spirits of the house, nothing comes of it initially. But Chrissy comes up with an idea of a chant that could facilitate communication. Shawn is hesitant to repeat a weird-sounding chant in Latin. However, Chrissy casually explains to him that it’s just a chant to bring peace to those who may not be at peace.

Our goofball gets convinced by this and utters the chant, which is immediately followed by a loud thud. A motion-activated camera in the toilet picks up something. A few moments later, Shawn discovers the truth about Chrissy. From then on, Shawn starts experiencing the full-on savagery of the vengeful female spirit. Despite being terrified by the onslaught of ghosts, Shawn doesn’t fail to check for comments. There he finds a video recording from a viewer, who emphasizes with a serious face about the true meaning of the chant. It actually means, “I give thee my soul and forfeit my will.”

Did Shawn Make a New Hamsa?

Earlier in Deadstream, when Shawn sets up the camera around the house, he goes into a room and calls it the place where the least amount of paranormal activity was documented. He makes his home base there, keeping his laptop and other equipment. While rummaging through the room, Shawn is spooked by a closet, which to his dismay possesses a wooden board, bearing the palm-shaped amulet known as ‘hamsa’.  In Jewish culture, the hamsa is believed to provide protection against evil. As usual, without understanding the weight of his actions, Shawn takes off the hamsa from the closet. Furthermore, he animatedly shouts to his viewers, “If something happens to me at this house, I guarantee it will be because of this.”

By the time Shawn learns about the true meaning of the chant, the supernatural terror pushes him to whimper for help. Moreover, Shawn winces in pain when he gets bitten by Mildred in the nether regions, and as a result of the panic he throws himself out from the upstairs hallway. The agony of the fall is only exacerbated by the attack of a grotesque ghost.

Fortunately, Shawn manages to lock himself up inside his car and plays a new video sent from a dead stream viewer. In the video, an elderly woman named Hettie appears and speaks of her time when she worked as a nanny and stayed in the house. She made the hamsa in order to keep Mildred away from her and to control her powers. Now all Shawn needs to do is make a new and more powerful hamsa. Of course, that’s easier said than done.

What Was the Ritual that Shawn Believes Could Save his Soul?

Since Mildred allegedly sold her soul to the devil, a powerful hamsa is necessary to keep evil at bay. But then Shawn finds a paper inside Mildred’s poem book. Looking at the paper that pictorializes some rituals, Shawn has an epiphany. What follows is a playful exposition-heavy dialogue addressed directly to us. Shawn comprehends that Mildred in her own way is collecting the souls to establish her own following. He recollects the inane audio recordings of ghosts and finds Mildred to be a ‘weirdo’ who wants these trapped souls to memorize her poetry.

Shawn, amusingly, even likens himself to Mildred since she also desires for an audience. So as per Shawn’s logic, he can hurt Mildred by concocting a spirit world version of a copy-strike. Hence, Shawn gleefully sets off on his mission to do the ‘unholy’ ritual to damage Mildred’s power and rescue his soul. Of course, Shawn doesn’t have to worry about the Latin words that are in the paper. The internet will translate it for him.

When Shawn initially performs the ritual and utters the words, he forgets one key component, i.e., blood sacrifice. This leads to a bloody and gory battle between Shawn and Milly. However, once he makes the necessary sacrifice, Mildred is digested by the house and it even burps out blood.

Shawn Ruddy can now relax and whoop with delight. He has delivered the perfect cinematic experience in live streaming as promised. But wait. Isn’t the ritual all about selling your soul to the devil? Is that why the deformed demons flock toward Shawn? It’s good knowing you Shawn and getting acquainted with your flawed logic and outrageous sense of humor. Poor soul, he has reaped more than what he bargained for!

Once again, a special shout out to the person or persons who created the lively live-streaming comments.

Related Articles: Incantation (2022) Movie Explained: Ending, Themes, & The Trauma Of The Past And Karmic Retribution Analysed

Where to watch Deadstream

Don’t Worry Darling Movie Ending, Explained - What is the truth behind the Victory Project?