Home»Reviews»Films This Week»Scary Stories To Tell in the Dark (2019) Review: Frightening Thoughts And Fearful Emotions
Films This Week/Reviews

I wish life was this simple. Scary Stories to Tell in the Dark. These are tales, told when the light is thinning, which hope to create dread and fear. A well-defined aspiration. But the film and its title do not seem to be on the same page. Scary Stories to Tell in the Dark expects us to love the genre, watch it closely, squirm in our seats, maintain loving the characters, and applaud at the pomp CGI, all at the same time. This is a convoluted aspiration. Or is it just an allegory of life? Which is after all, seemingly simple, but complex and mystique in reality.

References are thrown at us a few moments into the film. There are Bela Lugosi posters, a Bava-esque background score, and Night of the Living Dead playing at a drive-in theatre. Director André Øvredal perhaps expects us to take this stuff very seriously, with eyes wide open and sitting up in our seats, like an obedient student about to take a standardised test. As the film is set a few decades ago, the references are relevant for their time.

Similar to Scary Stories to Tell in the Dark: Pet Semetary (2019) Review

The main characters are introduced at the drive-in. With a couple of lines apiece, distinctive mannerisms, equal doses of tomfoolery, the formula tells us who’s who, and an estimate of how much ruptured tissue each of them might end up with post climax (karma?). There’s Stella (Zoe Colletti), the equanimity expert teenager with looks that predict her to be involved in some world-saving soon. There’s Ramon (Michael Garza), the complex compassionate, who saves Stella and her friends from bullies at the drive-in. There are evident marks of potential oxytocin fuelled moments between Ramon and Stella. It’s Halloween, and with the Romero classic playing, it prods us to imagine the potential nether that awaits.

The teens take a trip to the local haunted house (read desolated Bellows mansion), where a girl named Sarah Bellows had taken her life. Soon after her death, the Bellows family disappeared as well. Stella is quick to find Sarah’s book of scary stories, and once she asks aloud to tell her a story, darkness looms in. Nerve like grey and black lines take over the soiled walls of the house. The book writes itself, with the fate of how each of them would die. And now it’s up to Stella and company to save each other.

The first fifteen minutes show symptoms of the film being a tribute to the old masters of horror, but this changes fast. The metamorphosis is into a predictable scare-show, with plenty of why isn’t the car starting on time, is the ghost above the bed, under the quilt, behind the curtains, or inside the wardrobe moments. But do you not know, it’s always in front of you when you’re looking away, of course!

The night-day template of the film is exciting, and runtime is for most parts, justified. There’s some novelty in the form of the terrors for the night. They are well-defined monsters, each with their own story and distinct anatomy. Øvredal’s and Del Toro’s (who is one of the producers and writers of the film) vision seem in-sync in this regard. Øvredal’s Trollhunter (2010) featured a beguiling monster, and he brings the same sensibility and tone to the nightmares in Scary Stories. 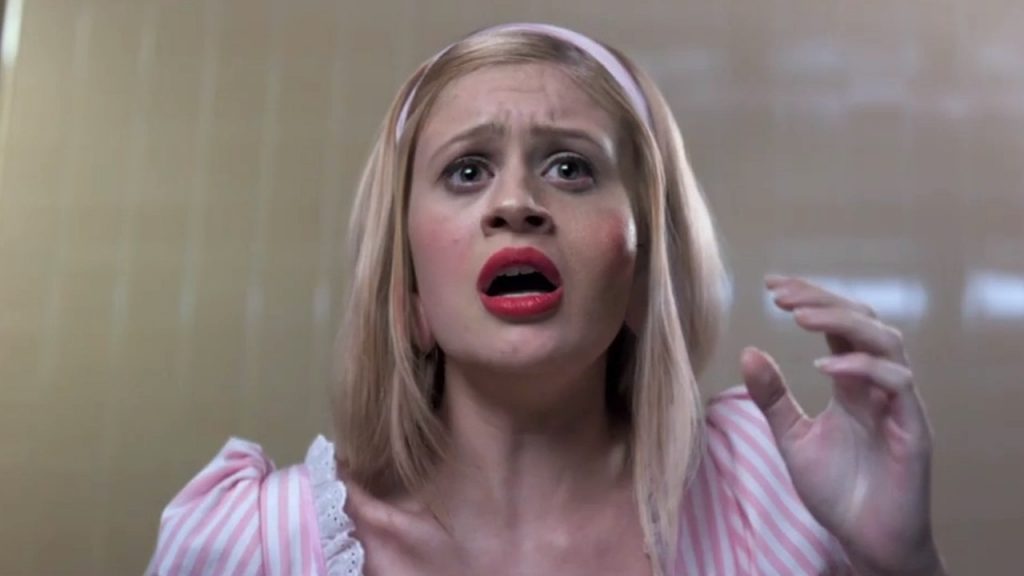 Scary Stories’s monsters are visceral, with obviously observable shape and body type. Unlike other films in the genre, no eye squinting is required to see them. They are a scarecrow, a corpse, a hulking zit, a multi-morph, among others, with riddling personalities, and dramatically different ways to kill. The illustrations by Stephen Gammell for the Scary Stories book could have been a probable guiding light for the production team.

The books came out in the 1980s, and early 90s. The Alvin Schwartz written collections found a wide readership, and became a case in point for the universality of horror writing. All of us have our own fears. The lucid depictions in the short stories reinforced our idea of the form that they took, and in some sense, became an encyclopaedia of monsters. The inevitable questioning happened, whether this trove of depictions was an appropriate read for children. And that if the gory material would be understood, and not leave the courageous fledglings shaken. These are important questions with no concrete answers. As fear isn’t concrete. The film takes this idea and runs with it. No two thoughts are the same. Both are cerebral manifestations with different histories. Similarly, no two monsters are the same. The variety of monsters or creatures or ghosts in Scary Stories is myriad, and works brilliantly with the idea of our ever-changing epistemic enterprise of fear.

Scary Stories is not a simple film. It has packed layers, which peel off as the grains of sand fall in the inverted hourglass. Only the grains don’t satisfy the laws of physics or that of cinema. The film alternates between tribute, provocation, scream fest, and morality.

In this forceful concoction, there is little room to emote to and experience fear in a human way, something which the stationarity of illustrations and paintings allow us to do. Scary Stories is successful in the audience is targets. Everyone. But the question again arises to which extent is it a universal film. A Pan’s Labyrinth sans the politics? The Evil Dead without the red? Stranger Things minus the board games?

The film includes a clever finale which shows the opaqueness of reality, and the subjectivity of fear. Can two people have different versions of it at the same time? Though there are some such parts which make up for the constant toggling between themes, the film proves banal in otherwise. When the ghosts end, the story ends. Truth and goodness triumphs evil. This binary is unsettling and slightly repulsive. And because of this, we want the ghosts to come back. But that wouldn’t shock us, would it? Because it’s always in front of you when you’re looking away, of course!

Scary Stories to Tell in the Dark Rating: ★★

Scary Stories to Tell in the Dark Trailer:

Scary Stories to Tell in the Dark Links: IMDb, Wikipedia