The idea of a box office bomb is an endlessly fascinating one to me.

In the realm of cinema as we know it today, it’s easy to gawk and gaze at the tremendous success certain films have achieved as they shatter box office records, receiving both commercial and at times, critical success. For most, Avengers: Endgame (2019) is the most recent example of this idea, having grossed a whopping $2.798 billion (I know that sounds like a joke, but it isn’t) against a budget of nearly $400 million. Ignoring the obvious ridiculousness of those numbers I just mentioned, cinema-goers (especially in the modern day) have been treated to spectacles that simply encapsulate the public subconscious, regardless of whether the film is as inherently masterful as its earnings would lead you to believe.

Case in point, Avatar (2009) and Titanic (1997), both directed by the consistent mega-smash maker that is James Cameron, are films that I and many others, find to be solid but far from perfect, with many inherent flaws that were swept away at the time of their release due to the sheer scope and whimsy of that same release. Avatar’s story is very by the numbers and is often overridden by it’s admittedly breathtaking and ground-breaking visual effects, and Titanic simply hasn’t held up incredibly well in regard to certain aspects of it’s story and characters. Billy Zane’s role as the films main antagonist, Caledon Hockley, is written as a stereotypical irredeemable bad guy whose portrayal is closer to that of the mustached guy tying the damsel to train tracks than anyone resembling a passenger on the Titanic.

Couple that with a sappiest of sap ending (which was even worse in the director’s cut) and this simply points to the inherent yin and yang nature of film-making. Gone With the Wind (1939) is technically the highest grossing film of all time (adjusted for inflation) yet it hasn’t aged particularly well at all and is at times both outdated and offensive in its imagery (depending on your viewpoint). At its core, a film has to both juggle the artistic integrity of the piece itself with the fact that it has to, well succeed in the first place. Otherwise you either get financial success with middling to terrible critical success (like the abundance of parody “movie movies’ ‘ in the mid to late 2000s) or critical success with a box office bomb reputation (The Iron Giant).

So, with that being said, what happens when a film doesn’t succeed in the first place? When it isn’t adored by audiences or critics? When well… no one goes to see it to begin with? That is when we become familiar with the idea of the box office bomb. Evaluating what makes a film a financial failure to begin with is far more difficult and complicated than evaluating what makes a film a box office success to begin with; additionally, if a film is successful, it usually (*ahem) makes up for the number of financial and or production issues that were encountered along the way.

In the case of a flop however, these issues come to the forefront when discussing why it fared the way it did, and this is what brings me to the 1995 Swashbuckling film Cutthroat Island. Growing up, I was never particularly aware of box office bombs as they occurred (as are most young people), but I do recall some whose reputation I only learned about later in life. From Doogal (Harvey Weinstein’s Americanized butchering of The Magic Roundabout) to Welcome to Marwen (an interesting yet ultimately underwhelming 2018 Steve Carrell feature) to the always-infamous Mars Needs Moms, a 2011 Disney release that lost upwards of $144 million, leading to the closure of Robert Zemeckis’s motion capture company ImageMovers Digital (makers of Monster House, The Polar Express, etc.)

In the case of Cutthroat Island however, it’s a film I honestly didn’t know existed in the first place, in spite of its dubious reputation. For the most part, the Swashbuckling genre has largely disappeared from the Hollywood mainstream outside of the oft-successful Pirates of the Caribbean franchise, which exists more so as an outlier to a largely failed genre rather than a true example of it’s potential for success. Case in point, director Renny Harlin and studio Carolco Pictures had grand visions for Cutthroat Island that ultimately, and quite frankly unbelievably, fell short of expectations. Starring Geena Davis and Matthew Modine, the film tells the tale of a treasure hunter named Morgan Adams (Davis) who goes on a search for the location of a stash of gold on the eponymous Cutthroat Island, left by her dying father. 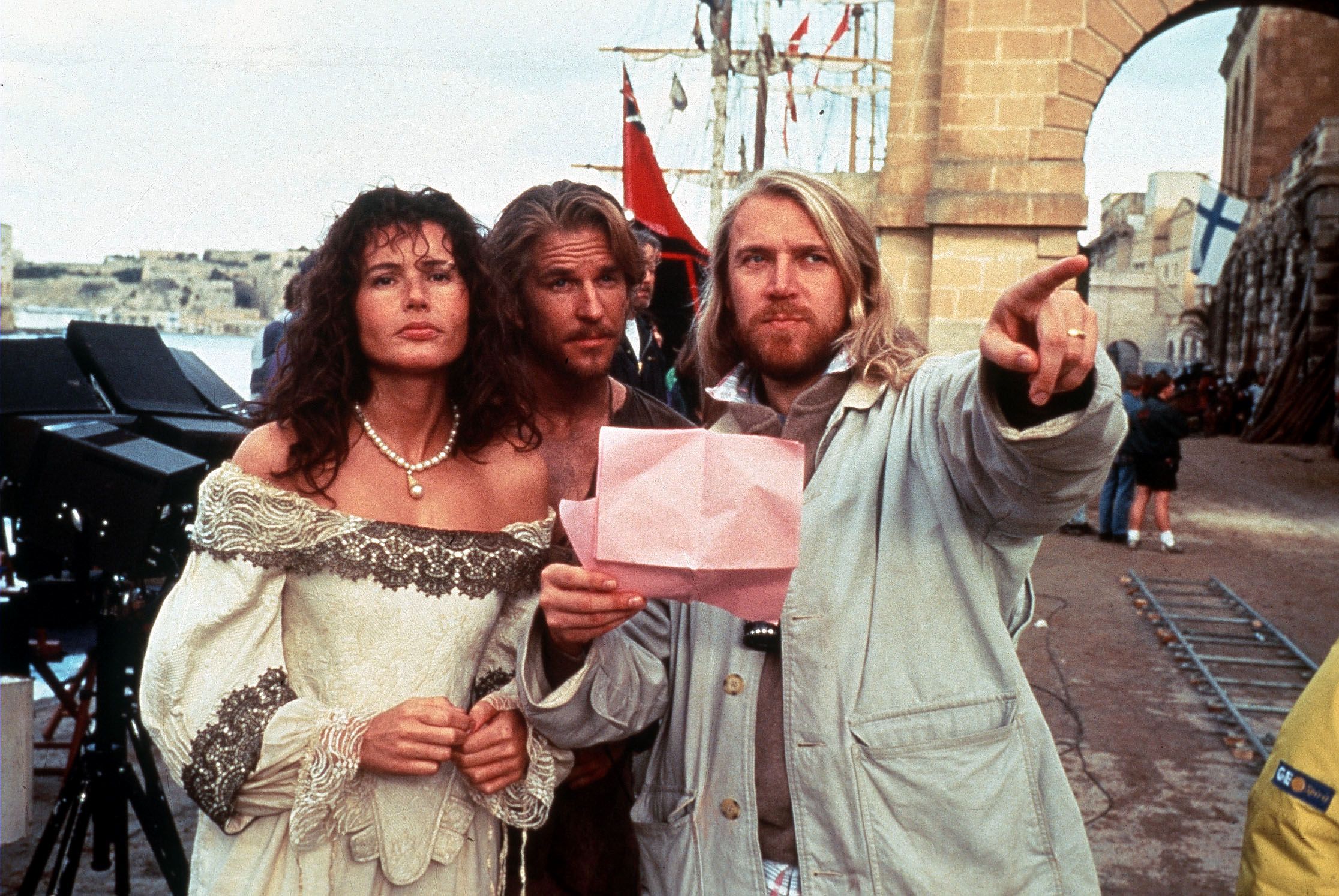 To say the film was a bomb would be the understatement of the millennium quite frankly. However, its story demonstrates why box office bombs occur in the first place, and why studios have since taken steps to ensure a film’s potential success isn’t based on false promises that simply cannot be kept or fulfilled (*ahem, most of the time). Carolco Pictures, for the most part, is a name largely forgotten in the realms of modern cinema, but for a time, it was a consistent and bankable studio with a number of box office smashes, from the first three films in the Rambo franchise to Total Recall, to Terminator 2: Judgement Day (another James Cameron work), relying largely on big-screen action blockbusters that were admittedly not without flaws.

However, in the context of 1980s film-making, all of these films are perfect snapshots of their era and still stand as either some of the greatest films of all time or as cheesy summer Blockbuster popcorn fodder. Unfortunately, Cutthroat Island didn’t fare quite as well, and it’s a failure that was admittedly years in the making, kept afloat by false promises and a desperate hope that this far-fetched idea would save a now fledgling company. Released on December 22nd, 1995, in the United States, Cutthroat Island had a budget of around $98 million largely dedicated to its incredibly intricate set pieces and production design, amidst a horribly troubled and chaotic production cycle. Making back just $10 million at the box office, the film lost anywhere in the neighborhood of $147 million, causing Carolco Pictures to go under without much fanfare.

While the studio had hoped for the film to be a Hollywood comeback after a number of underwhelming returns, it instead sank them before they could even begin to swim to the surface, declaring bankruptcy weeks prior to the film’s release, which, admittedly, fits in with many of the issues that contribute to a box office bomb.

When a film’s ambitions override the reality of it’s true potential, getting lost in essentially a no turning back approach on something that is most often doomed from the start. For most people, the de facto case study No. 1 for this concept is the 1995 Kevin Reynolds film Water World. With a budget of $175 million, this Kevin Costner vehicle was the most expensive film ever made at the time, and like Cutthroat Island, featured massive set pieces and unbelievably complex production design (which most of the story, if there ever was one, got hopelessly lost in).

Despite being one of the highest grossing films of 1995 (unlike its contemporary), it failed to recoup its massive budget until post-video sales allowed it to turn a profit. Again, this is largely due to the concept of when a film’s vision exceeds its realistic expectations, and Cutthroat Island is an even more prominent example of this, being listed by the Guinness Book of Records as the biggest bomb in cinema history (though this is debatable).

At its core, the film is solid, I suppose, but there’s ultimately nothing about it that fits the expectations Carolco had for it. Furthermore, it contains a slew of over-the-top schlock that feels out of place given not only the expectations, but also the artistry and obvious dedication and seriousness that went into the production design. Despite the elaborate and detailed sets, the plot is a largely incomprehensible mess that more closely resembles a misguided parody of a typical swashbuckling epic than anything that could be compared to Captain Jack Sparrow films.

Only adding to this is the previously mentioned production cycle, involving numerous rewrites, re-casts, re-set designing, and basically any other re you can apply to any other word in the English language. According to publications from the New York Times and The Independent, Michael Douglas (producer of One Flew Over the Cuckoo’s Nest) was originally slated to play Modine’s part, but had unrealistic demands that conflicted with the shooting schedule. Davis wanted to drop out when Douglas eventually did. But she was contractually obligated to finish the film. Modine only took the part after the likes of Tom Cruise and Liam Neeson rejected it (mostly because he was an expert fencer), and director Harlin’s over-fixation on finding a male lead, coupled with numerous arguments and accidents involving cinematographers and other crew, caused the films budget to spiral out of control, with many script rewrites and set re-designs.

All in all, this doomed Cutthroat Island before it could ever get off the ground and leaves it as a noted reminder of the well, cutthroat nature (no pun intended) of the film industry, and the ultimate factors that come into play when defining what makes a film a box office bomb. By ensuring investors it would be a success, Carolco backed themselves into a corner to fulfill a promise they knew they never could, and as such, Cutthroat Island is as much a passing entry in the long-gone swashbuckling genre as it is a beautiful and yet disastrous example of a box-office bomb.