It’s fair to assume that Grimm’s fairy tales played a part in everybody’s childhood. Be it the original stories, or the retellings, or the translations, those fairy tales have reached all corners of the world. The wide popularity is what makes it incredibly difficult to put a new spin on them, especially one that improves it! Nightbooks’ approach by referring to them, and clearly stating the inspiration, is appreciable because the structure of the story does feel like a tribute to the original tales. The incorporation of one of the stories directly, just adds to the homage it pays. However, the most memorable aspect of the film has to be the fashion sense of the impeccably dressed witch in the story.

Her very first appearance is itself pretty impressive. Her getup, body language, and of course, the intriguing introduction. ‘I’m a busy witch.’ She’s almost not interested in torturing the child she clearly kidnapped. She quickly gives him a run-through of what happens to kids who are of no use to her and then moves on after hearing he can tell tales.

This premise is why Nightbooks will seem unique despite the overuse of plotlines from Grimm’s fairy tales by all formats of performing arts, ever since its existence. The fact that it celebrates writing within a fairytale-ish horror aesthetic, sets it apart. And the personal dilemma set up around the writing of said stories, although a cliché tale of a middle school invisible geek, manages to pique the interest of the viewer due to its intimacy and personal treatment.

Much like her counterpart from the iconic ‘The Devil Wears Prada’, Ritter’s witch comes and goes as she likes, and turns heads, making a statement with every costume she dons. Her screen presence is imposing, and that’s magnified thanks to the costume design. Krysten Ritter’s acting is a major factor too. She expertly balances body language based on the attire she has to pull off. The attires reflect her mood and the personality trait she is having to tap into, at that moment, although all of them are flamboyant in their own way. It’s the amount of flair in her that makes her such a powerful persona because apart from that, her characterization doesn’t make sense till the very last minute of the film.

The pink in her outdoor getup complements her bleached hair and is somehow both menacing and seductive at the same time. However, whether it’s the pink ones or the rather threatening black costumes she wears at home, which are much more intimidating in design, she seems at home in all her attires. This fashion show of sorts, which celebrates the glamorous nature of the witch, makes for a visual treat. The blue tint in her hair adds to the mystique and makes the already threatening black attire, even more imposing. The dark blue dress is possibly the one that Ritter wore best, and the way it blends and yet stands out, in the dimly lit apartment, during lightning flashes, is highly mesmerizing. 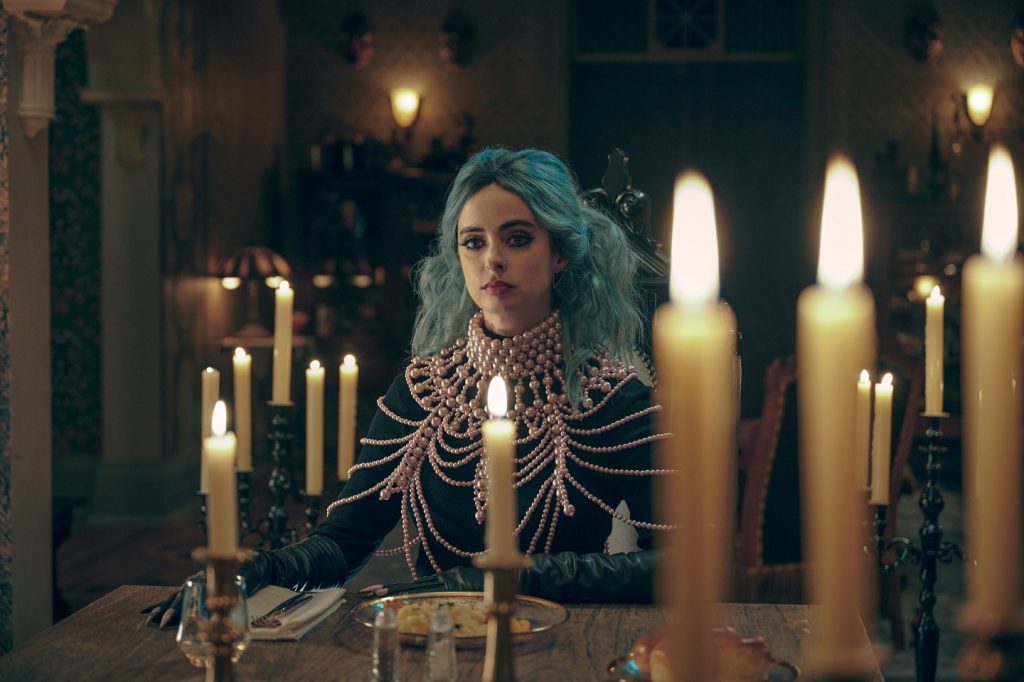 The captivating nature of the visuals isn’t limited to the costumes though. The cinematography, set design, color palette and lighting, all contribute heavily to what is possibly the strongest suit of the film. The visual tone perfectly reflects that which is imagined on reading Grimm’s original fairy tales. The design of the night nursery is the very definition of visual appeal. It’s basically just planted, but the lore that they grow in the absence of light needed such a beautiful visual design to sell the magical nature of these plants, that it feels like a rainforest of wonders where you would want to go on an exploration. It’s exactly how an imaginary magical land is visualized, with the captivating fluorescence.

And that’s not all. The dilapidated apartment somehow manages to feel both cozy and terrifying, just like the houses and the places in fairy tales about a kidnapping. Plus, the infinite library of fairy tales is the dreamland of all kids. The intricate design with winding staircases and curved shelves filled with books makes the room visually appealing. It simultaneously appeals to the soul, purely for the concept, apart from the visuals.

The fact that every fairy tale ever made resides there, within the reach of your hand makes it extremely attractive and appeals to the child in you. Then there’s the spellbinding unicorn, with its flowing mane, its twisted horn, its majestic physique, and its imposing presence. The Shredders are an innovative addition and their design further adds to the visual intrigue.

Also Read: A Monster Calls (2016): An Endearing Tale of Acceptance

However, the story at the heart of Nightbooks is quite simple really. That’s not necessarily a major flaw but might make the film seem flimsy to an adult viewer. If one keeps in mind the inspiration for the story, and then considers its structure and message, it’s perfect really. Two children kidnapped, by a witch who is a hard taskmaster and inherently scary, scheme against her, plotting their escape. They keep themselves alive by feeding her scary stories with sad endings and lay in wait for the perfect opportunity to put their plan to work. Can they escape, or are they destined to live as puppets for the witch who is parallelly a glamour queen?

The similarity of her with Miranda Priestley however, might entice fans of The Devil Wears Prada, because the similarity doesn’t stop with the costumes. She is terrifying, demanding, critical, ungrateful, and pays a lot of attention to details. Plus, mild spoiler: they have similar backstories too. Instead of trying to figure out how I’d suggest giving Nightbooks a watch!

October 2021 MUBI Picks - A Touch of Sin, You Were Never Really Here, The Umbrellas of Cherbourg, Hereditary & More