Sudhanshu Saria’s miniaturist romance Loev (2017) unfurls over the course of a weekend. The couple in question here is gay, but the movie never plays like a clamorous commentary on gay activism. Mr. Saria is both earnest and specific in his layered romance between the two principle male characters, but it’s much more than homosexual characters coming out of the closet, accompanied by swooning music. The emotional beats of the narrative may be specific to the ‘gayness’ of the characters, but there’s also a surprising universality in the way their interpersonal dynamics and hyper-naturalistic interactions are designed. Of course, Loev’s discursive structure, indecipherable emotions, and nuanced depiction of lives of these youngsters influx may not easily make casual movie-watchers to roll with its style. Nevertheless, the verite style of film-making elegantly takes the central couple’s friendship/love to a more intimate, unanticipated, and even wilder place. 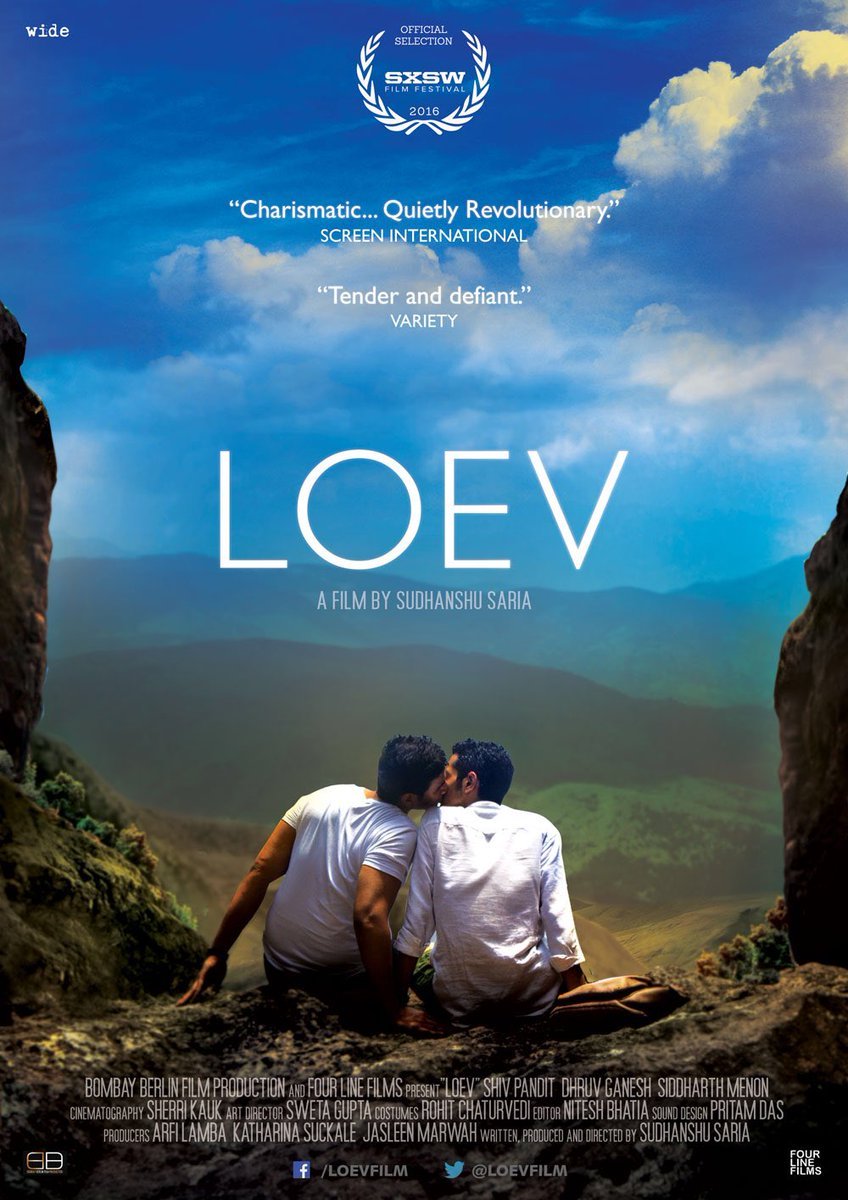 Yes, India is a country where the LGBT community is not simply ostracized, but the Section 377 of the Penal Code criminalizes (consensual) homosexual sexual activities. But instead of taking a conventional route of activism, Loev grapples with and acknowledges a different spectrum of love without turning it into a debate. By primarily focusing on the friendship and sexual awkwardness, director Saria tries to open up viewer’s perspective without compromising on the subject matter. The film opens in a dark, sweltering room, in Mumbai, with wiry shirtless Sahil (Dhruv Ganesh) fumbling to light up a candle. The literal dingy surroundings hint at the Sahil’s emotional strain, who is packing up for a weekend getaway. Sahil’s happy-go-lucky boyfriend Alex (Siddharth Menon) has forgotten to pay the electricity bill, the latest example of his persistently irresponsible behavior. But Sahil doesn’t have the time to engage in confrontation and grudgingly carries his backpack as his partner drops him at the airport.

Sahil receives his suave friend Jai (Shiv Pandit), a Wall street guy, who seems to be there to possibly revive his past dalliance with Sahil. Jai has to close a lucrative real estate deal in Mumbai, but before that the two friends take on an idyllic journey to the foggy Mahabaleshwar. They find themselves in a modest guest house room, fitted with two single beds. Their emotions and bodies (Jai’s jetlag) aren’t in perfect sync, but gradually the lingering anxiety eases through. Sahil and Jai don’t judge each other, and in nuanced terms there’s mention of Jai’s closeted-nature (he seems to have a daughter and a girlfriend). Both the personal details of the characters and the omnipresent disapproval of homosexuality (seen fleetingly through the obscure gazes of outsiders) provides context to understand their inner emotions, rather than to create tasteless melodrama. The second-phase of the trip moves back to swanky hotel room in Mumbai as Jai prepares for his meeting with the hotshot businessmen.

Loev neither offers any dramatic resolution nor connects every emotional dots. Both the characters’ sexual orientation and emotional conflicts slowly permeates into the narrative. There are no conspicuous visual techniques or musical cues to tell you should exactly feel. It demands a little from audiences to attune themselves to its unexpected currents of emotions and uncanny sensitivity. If ‘Loev’ was a ‘issue movie’ , it would have included a scene of gay-bashing, but the director takes a conscious decision to reject this mode of dramatic firework. The narrative does have one violent, disturbing scene, but the unstrained cinematic language is consistently centered around on the dynamics between Sahil, Jai, and Alex.  Obviously, director Saria packs a lot of things beyond the surface, in what’s left unsaid, which kind of reminds us of Wong Kar Wai’s Happy Together (1997) and Andrew Haigh’s Weekend (2011). The sublime cinematography by Sherri Kauk brilliantly enfolds bodies, faces, and inexhaustible landscapes. It kind of accesses their private spaces without actually violating them (a kind of film-making that looks easy and effortless, but it isn’t). The locations are perfectly calibrated to suit the narrative but seem natural and unselfconscious. Ganesh & Pandit offers tremendously relaxed and absolutely convincing performances. The chemistry between Sahil and Alex looks credible not only through intimacy but also in bickering and frustration.

Sudhanshu Saria’s astoundingly self-assured debut feature Loev (92 minutes) is as much about the puzzlement of gay identity as it’s about the pleasures and risks of love. It doesn’t hasten to provide easy answers or easy payoff and rightly chooses to remain true to the unresolved, open-ended nature of the people’s feelings it visualizes.