Ozu’s Equinox Flower [1958] : The Autumn of the Patriarch

Whether Yasujiro Ozu’s final six films, all of which were shot in color, can be categorized into an entirely separate artistic phase of his is a debatable idea. Essentially, his films undergo marginal changes across his entire career. At large, these films belong to his broader post-World War II phase where Japanese family values under threat with the onset of modernity is the chief concern, explored almost always through the institution of marriage. A surface glance makes it seem like the changes he brought into these films were merely aesthetic, which should not be understated given how his compositional and chromatic astuteness is clearly at its peak here. Yet to dismiss what distinguishes these films solely on the basis of their visual allure is highly erroneous as a more comprehensive evolution is clearly on display in them. ‘Equinox Flower’, which was released in 1958, his first color film, has an ingrained sensibility that is markedly different from his previous works and sets the stage for themes that keep surfacing in these final films of his.

The story of ‘Equinox Flower’ is about a bourgeois family. Among the two daughters the eldest, Setsuko, is at a marriageable age. The father, Wataru, a rigidly conservative man, wishes to see her get married soon to a suitable boy from a respectable family. A major issue arises when Setsuko’s boyfriend unexpectedly shows up at Wataru’s office to ask for her hand in marriage. He outright refuses this stranger, despite showing no qualms against Setsuko having a boyfriend during a lighthearted moment earlier in the film. The rest of the plot concerns how Setsuko is to get her father to give his blessings and agree to her marriage to her beloved. Fumiko, the daughter of a loquacious family friend, becomes a key in this affair in helping her out.

‘Equinox Flower’ separates itself from its immediate predecessors in its depiction of the fallibility of the patriarch of a family. The character of Wataru, who at first comes across as an amiable, liberal man is soon revealed to be a somewhat possessive tyrant. It is evident that his anger is not at Setsuko’s choice of her husband but at his own separation from the process of that choice, something he feels entitled to as a father. His inflexibility is so severe that he starts to come across as unsympathetic, not a trait found easily in Ozu’s characters. On finding out about her romantic affair, he grounds Setsuko as a punishment for her deviation, turns a deaf ear to her protestations, is unwilling to change his opinion of her fiance, hires a detective to find out more about him, so on and so forth. His wife, though relatively sympathetic to Setsuko’s dilemma, rarely disagrees and mostly serves as a mouthpiece for him. His aura constantly asserts the idea that ‘Father knows best’ and is fueled by an insecurity on seeing how his ordered life is starting to burst at the seams.

Wataru is not despicably rude in this endeavor to thwart his daughter’s love affair. In wanting to set Setsuko up with a man of his choice, he essentially comes across as a man out of time. As he states in a speech in the opening of the film, his own marriage was ‘plain and unsentimental’, arranged and carried out entirely according to the wishes of the parents involved. He is merely attempting to emulate that, in the vein of that barren hope that so many people in their middle ages do to uphold a world from their past that in its distance, seems far more righteous than the present. 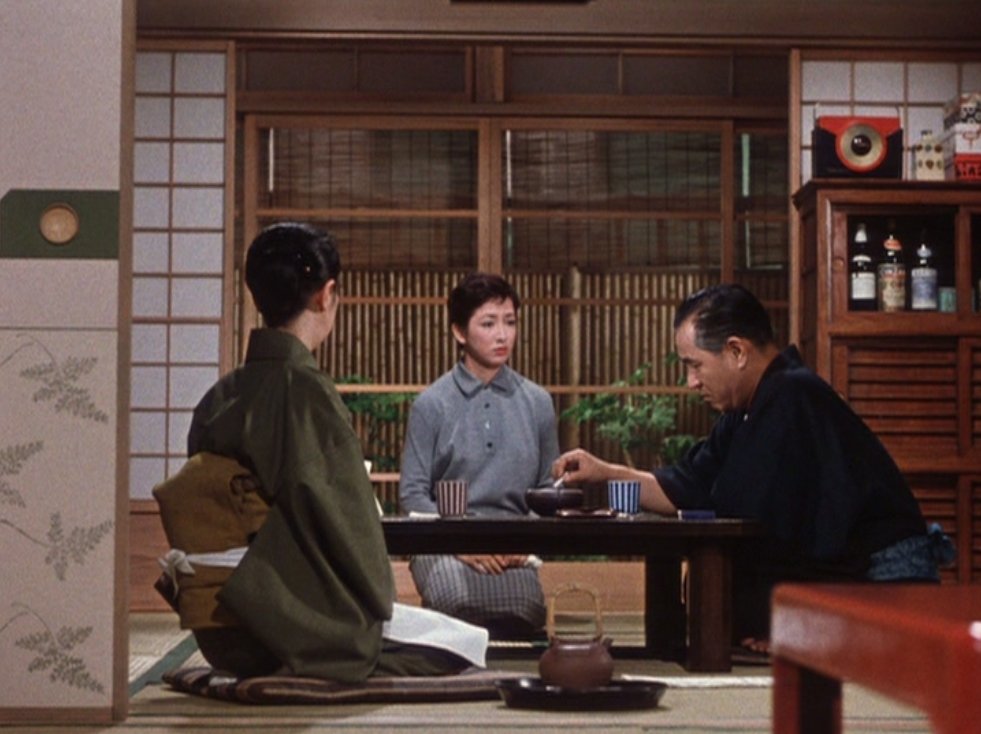 The tragedy here lies in his hypocrisy as seen through his avuncular persona. He advises Fumiko to not hurry into a marriage, goes out to drink with a subordinate at work and sits down to reason with Shukichi, the runaway daughter of his friend, Mikami without trying to single out the wrong she’s done. In the aforementioned speech, at a wedding, he even expresses his envy at the newlywed couple’s good fortune in being able to let the world know about their love and get married accordingly, something he and his contemporaries were forbidden from doing.

These hypocritically separate personalities are eventually exploited by Fumiko. She tricks him into giving his consent for Setsuko’s marriage, a deception which he does not let in the way of his obduracy, at first. In stark contrast to Ozu’s previous works, Wataru’s intransigence is not turned into some traditional virtue of the father. While his paternal concern is shown, it is not used as an excuse for his behaviour. Eventually, he relents to these subterfuges though with great reluctance and decides to pay a visit to his daughter after she has gotten married to mend their relationship. This form of agency given to the young characters to decide the course of their life and make their family acquiesce to their sense of right and wrong was completely absent in Ozu’s previous films.

In ‘Late Spring’, Noriko refuses to get married because she worries about the welfare of her widowed father who, reluctant as he is, sees the necessity of her marriage to meet social norms. After a fierce internal battle over this sentiment, she eventually submits to said norms and even asks her father to forgive her for her ‘selfishness’. The film, which had become the prototype for Ozu’s body of work in the 1950s, sees its vindication here. The likes of Setsuko, Fumiko and Shukichi are not nearly within the bounds of a similar bondage. If mendacity, disobedience and deception were tantamount to sins in those films, in ‘Equinox Flower’, they are mere friendly pranks, played to get their way and lead the elders in the direction of the newfangled world that they seem to be completely out of touch with.

What we observe here is a clear and gradual erasure or evolution of olden values and a transfer of power into the hands of the contemporary generation. It is an idea that for Ozu, was a monumental shift of sensibility from what had been characteristic of his films to that point. Less than two decades ago, he had made ‘There Was a Father’ in 1942, a film that seemingly sanctified the exalted relationship between a father and a son despite the former, who in a fit of guilt chooses to keep himself separate from his son for the rest of his life to ensure that he is not a victim of his irresponsibility. The son, despite his immense love for his father, chooses obedience to his will over his own desire to be close to him. Made during the Second World War, the film’s upholding of values of veneration and deference was taken to be a political message meant to rouse a similar fervour of compliance, discipline and duty amongst the youth in service of the nation. While such orthodoxy softened in the films that Ozu made post-1945, the belief that what elders do is always in the best interest of young people never quite left them. 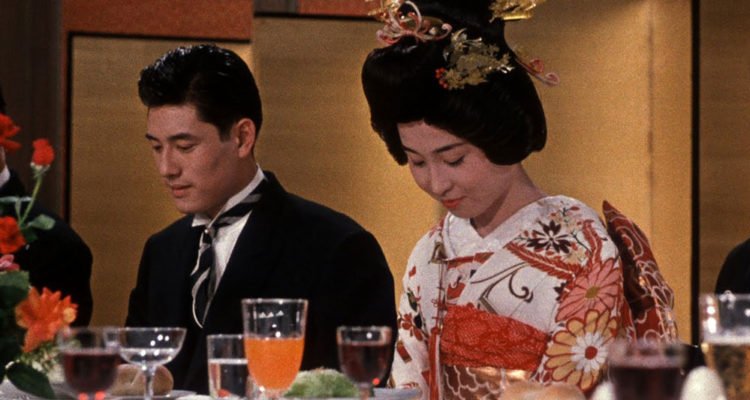 Towards the beginning of ‘Equinox Flower’, a friend of Wataru remarks,’I heard if the husband is the stronger, then the couple will have girls, and if the wife is stronger, they’ll have boys’. It’s a slyly comic way to establish how the power dynamics work in Wataru’s marriage and at home. Though Ozu never veered into the territory of machismo, a distinctly patriarchal undertone arising from Japan’s traditional value system are found in all his films, this being another example of it. Wataru is a patriarch whose rectitude is no different from those found in Ozu’s previous films. Towards the end, during a school reunion, Mikami sings a song about a soldier who, despite knowing the futility of his efforts, is still heading into battle with his comrades. He does it as it is a moment of pride for him, to be able to fight for his emperor. When Mikami stops midway, another character remarks that this is ‘inspiring stuff’, before they all start singing (including Wataru) about a soldier who takes shelter under a tree and is confused as to what dampened his armour sleeve, the dew or his own tears.

This is a self-contained arc within the narrative which speaks volumes about these middle-aged men. Their nostalgia makes them sympathize with a world where duty and obedience is held above all. They fail to recognize how different the present is from it or whether it ever aligned with their idealism in the first place. By showing them celebrating the command they have over their lives and families at first, only to show it devolve into situations that threaten the disintegration of their very families, the hazards of their righteousness is brought out.

Ozu passed away in 1963, seven years after the death of Mizoguchi and around the same time that Kurosawa fell out of favour with Japanese film studios and young audience members alike. It is during this period that a brash new wave of filmmakers, taking heavy inspiration from the French New Wave and the deluge of American culture created what is now informally known as the ‘Japanese New Wave’. It was a period of collective fecundity that radically changed the country’s cinematic landscape.

Mizoguchi, in his final years had only clamped down on his style and made it reach its pinnacle whereas Kurosawa’s scope and grandeur which made him uninvestable only became grander than ever across the rest of his filmography. Only Ozu, amongst these three titans of Japanese cinema, whose films preached values that were, in all probability seen as ‘ancient’ went through a quiet yet remarkable change at this time. In retrospect, it is not an overestimation to see this agency he placed in his young characters in his final films to be a passing of the baton to this new generation of filmmakers who would take their cinema to even greater heights.

10 Of The Best Gambling Movies You Need To See

Ozu’s Equinox Flower [1958] : The Autumn of the Patriarch